I have gotten several requests to do a write up on the new “Nightmare Theater” with Sammy Terry.

Despite the requests, I have been reticent for several reasons. The new
Nightmare Theater is in the grass roots stage, although whether or not it
should be is debatable. After all, Sammy Terry has a fifty year legacy, so it should not be a case of having to compete with the Johnny-come-lately horror hosts, of whom there are far too many of dreadful quality. With his long history, Sammy Terry could be venturing into new territory, rather than reconquering the market of local television, especially since local television really no longer exists. 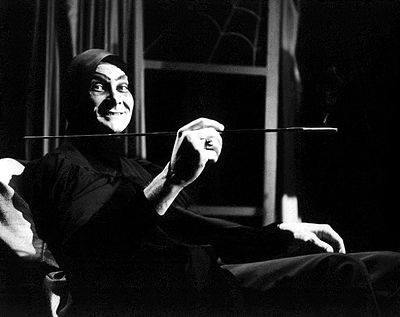 The first and most glaring problem with contemporary horror hosts is the question of whether they’re needed. In the golden age of horror hosts there were a half dozen or so local television stations, and the video/cable/Internet age was something akin to science fiction. If one wanted to watch Frankenstein (1931), then you might get the chance to see it once a year via the local host, who, in our case in Indianapolis, was Sammy Terry on WTTV 4.

Today, the horror host is simply not a necessity, so in order to entice an audience the host should have interesting personality, story, and characterization. Today’s hosts simply get up and do their shtick. Often, one questions whether or not they have even watched the hosted film. If the host wants the audience to acknowledge his or her entertainment value, then his enthusiasm needs to be contagious. It rarely is. The host hardly has to have a back story and, indeed, some sense of mystery should be retained. Today’s audience is much more sophisticated; the personality of the host, and his or her ability to make us care, is vital. 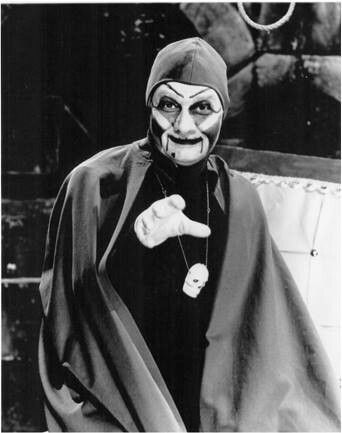 Instead, contemporary horror hosts can often be seen hawking their wares at various horror conventions. Often, They seem more like used car salesmen than mysterious entities.

Mark Carter is the son of Bob Carter, the original Sammy Terry. Bob has retired and has passed the cape onto Mark, who is a dead ringer for his dad. Mark has an answer for the inevitable question “are you the Son of Sammy Terry?”—a classic “only Sammy’s blood has  worn this cape.” Unfortunately, Mark’s ready-made response has yet to be put to use in an actual public interview. Instead, when local news programs interviewed the new Sammy Terry, he broke character when the question arose, which was a misstep.

I fondly reviewed the original Nightmare Theater 2 years ago (at 366 weird movies), but the primary reason I have been reluctant to do this follow-up is because I have numerous associates working on the new Nightmare Theater. I sat in on a few round table discussions with the team. I made and documented a few suggestions, then went back to other endeavors. In the time since, a few associates have broken away from the Nightmare project. There have been conflicts and competitive egos. Several other associates continue to remain with the team. Luckily, I have been at a distance from it, so I feel objectively free, at this point, to go ahead with my observations—and those are unfortunately mixed, because I feel there is considerably rich potential for Sammy Terry and the New Nightmare Theater, but there are also legitimate disappointments.