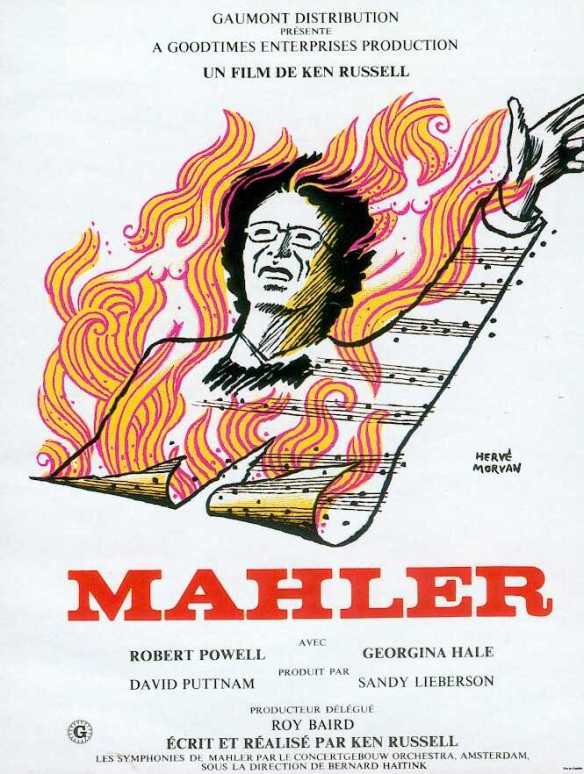 Mahler (1974) is probably  Ken Russell`s most personal film. As expected this filmmaker  admirably refuses to treat  his subject with phony reverence. Rather than a plaster saint here, Mahler is a neurotic, obsessive Jewish composer, hen-pecked husband and an artist whose drive stems from flesh.

Unknown to him at the time, actor Robert Powell’s role as the composer was his audition to play one Jesus of Nazareth for Franco Zeffirelli three years later. Powell’s Mahler is not the Mahler of a Mahler cult. Mahler’s writing is clearly an immense struggle, as is his relationship with his wife, family, colleagues and admirers.

Russell pays Mahler authentic homage in not succumbing to the type of pedestrian biopic cultists tend to favor. That type of bio treatment can be seen in Richard Attenborough’s Chaplin (1992), the kind of well-intentioned but hopelessly unimaginative film one expects from a fan. Julie Taymor`s Across the Universe (2007) takes the opposite approach in her stubborn insistence that the Beatles are not sacred and, thus, aptly produced a film as experimental as were the Beatles themselves (she did Stravinsky and Shakespeare the same honors with Oedipus Rex in 1993 and Titus in 1999).

Ever the renegade spirit, Russell, like Taymor, digs into an idiosyncratic interpretation of the artist’s core. Mahler (1974) opens to the first movement of the existential Third Symphony (conducted by Bernard Haitink) juxtaposed against the composer’s hut on a lake, bursting into Promethean flames. Mahler’s mummified wife, Alma (the resplendent Georgina Hale) emerges from a cocoon on the beach and crawls on jagged rocks, struggling to free herself of her bindings. Atop a rock is a bust of her husband, which she embraces and kisses. This dream imagery is explained by a terminally ill Mahler to Alma, who is not amused and misinterprets the dream as a symbolic marital power struggle. Mahler himself fatalistically interprets the dream as one signifying her birth, made possible by his inevitable, impending death. The entire film takes place on Mahler’s final train ride and is interwoven with dreams and flashbacks, piling one existential layer upon another.