“Hagia Sophia” (Thomas Merton) I. Dawn. The Hour of Lauds. There is in all visible things an invisible fecundity, adimmed light, a meek namelessness, a hidden whole-ness. This mysterious Unity and Integrity is Wisdom,the Mother of all, Natura naturans. There is in allthings an inexhaustible sweetness and purity, a silencethat is a fount of action and joy. It rises up in word-less gentleness and flows out to me from the unseenroots of all created being, welcoming me tenderly,saluting me with indescribable humility. This is atonce my own being, my own nature, and the Gift ofmy Creator’s Thought and Art within … END_OF_DOCUMENT_TOKEN_TO_BE_REPLACED

“Canticle for the Blessed Virgin” (Thomas Merton) Die, Boreas,And drown your ruins in the gaudy sea,December, clash your cymbals once againAnd put them away.The crops come thronging from the ground.The land is green with strength.The harvests sing like confidenceIn the ascetic earth.Let there be no more patienceWith your iron music, death:Stand, continents, and wear the spring your crown! The ox-eyed land,The muted lakes,The cloudy groves that praise you,Lady, with their blooms,Fuse and destroy their lightsAnd burn them into gold for you, great Virgin,Coining your honor in the glorious sun. The skies speed up to meet you, and the seasSwim you … END_OF_DOCUMENT_TOKEN_TO_BE_REPLACED

BROTHER COBWEB AT THE HOUSE OF SHADOWS END_OF_DOCUMENT_TOKEN_TO_BE_REPLACED

January 31st is the 100th birthday of Thomas Merton. In honor of his centenary, the following is an excerpt from my Master’s Thesis: Justification By Imagination: The Marian  Art Of Thomas Merton.  The thesis was approved by Drs. Frank Burch Brown, Marti Steussy, and Lorna Shoemaker. Introduction: Opening Merton It is, perhaps, apt that Thomas Merton’s Marian art is primarily concealed—much as the Marian figure is in the gospels. The bulk of Merton’s Marian drawings reside at the Thomas Merton Center at Bellarmine University in Louisville, Kentucky. Little of that art has been published. To approach it, one must first … END_OF_DOCUMENT_TOKEN_TO_BE_REPLACED 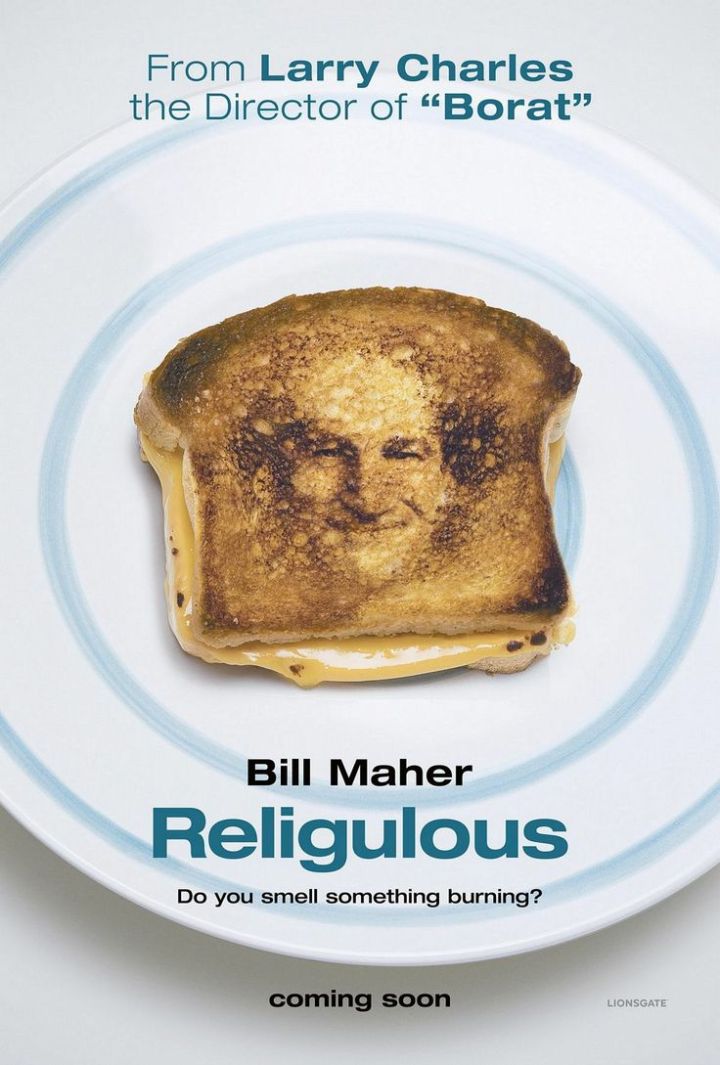 When Bill Maher’s Religulous (2008) premiered, it predictably opened to mixed reviews. Narrated by Maher and directed by Larry Charles, Religulous is a scathing criticism on what the filmmakers see as inherent ignorance and immorality within religion.

Most of the ammo is reserved for Christianity. Instead of confrontations that shatter myths and raise consciousness, Religulous goes for cheap laughs, manipulating footage to make the participants resemble complete boobs. Maher has the sense to pump the brakes around Islam, treading carefully. Salient points are made about this furiously hot-potato faith, but Maher is noticeably outgunned, challenging the history of Islamic bloodshed from behind the comfort of news clips and sheepish concessions. The way the Middle East rumbles these days, how could anyone blame him?

Indeed, the first third of Religulous concentrates solely on Christianity. However, Maher, who wrote the film, was raised as an American Catholic, though with a Jewish heritage. Often, writing is most effective when it focuses on what one knows, and Maher seems to know Christianity. Yet, what he primarily depicts is a particular variety of fundamentalist Christianity. While polls vary in regards to the percentages of American “liturgical” Christians in contrast to “fundamentalist” Christians, few would argue that the latter comprise the bulk of stereotypes of the faith. END_OF_DOCUMENT_TOKEN_TO_BE_REPLACED

For all the well deserved criticism leveled at the hypocrisy in religious leadership,  the new “spiritual but not religious,” “religionless religion,” and tutti fruity new age spirituality is such hackneyed tripe, that I am, at times, apt to prefer the insecurities of ancient religion.

Sometimes we get educated in things we do not want to know. Such was the case when recently stumbling on the site: “Lightworkers.” In addition to the cornball name, the website itself is something akin to a summation of the banality found in the “spiritual, but not religious” fad (and a fad is what it is). It is yet another trivialization of something primordial, raw, confounding, and unreachable (thankfully so).

That the “light workers” use gnosticism as a kind of sticker logo is even more nauseating, which inspires me to ask: “what the hell is wrong with “spirituality?”  I used to ask that solely of religion. It is akin to what the Merton industry did to poor Tom:  posthumously transforming him into a kind of Trappist Stuart Smalley. Naturally, the Lighworkers throw in pagan deities (merely because it falls into that oxymoron category of trendy provocation), reincarnation, and putrid pastels. It reminded me of that kitsch Jesus postcard from a years back; the impossibly beautiful caucasian model from Nazareth, adorned in blinding white robe, emitting a spectrum of colors from his being. That image is only slightly preferable to the gun-toting apocalyptic Jesus, who would gladly fry you for passing gas in church. Jesus as a smiley faced, John Boy Walton type along with primitive rabbinic narratives transformed into rosy-cheeked vegetable cartoons are just as offensive as that sadistic “Left Behind,” fundamentalist image.