Five Minutes To Doom (Dir. Tommy Carr) is the introductory episode to season two of The Adventures Of Superman. Already, it is a slicker product than what passed in previous season and, as expected, there are gains and losses. It’s lost none of its grit, even with a new, bourgeoisie Lois Lane.

Five Minutes To Doom is literally a noir cliffhanger with Clark Kent using his abilities as a human lie detector test (gauging the heartbeat of a convicted killer) to determine the man’s sincerity. Someone doesn’t want Kent and gal pal Lois Lane uncovering the truth behind a corrupt contract deal and attempts to assassinate the cub reporters. Lane condescendingly praises Kent for his out of character bravery. 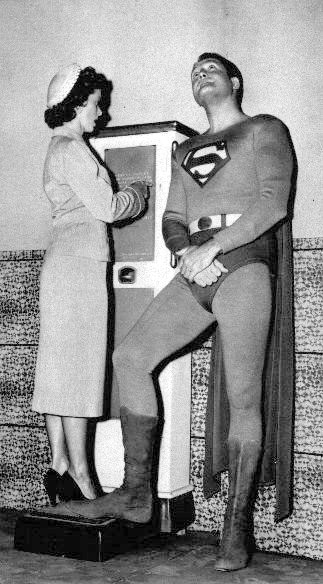 Reportedly, Carr was hard on Neill, whom he found lacking, compared to the much missed Coates. Reeves’ defended Coates and while that’s an admirable example of cast camaraderie, it’s difficult not to sympathize with Carr’s POV. Neill claimed that she was merely playing herself but that may be part of the problem with her portrayal of Lane, who often comes across as a Sarah Palin styled Avon lady huffing and puffing her way through the newsroom with status quo shoulders, chastising Kent for not being man enough, even though we never see his cowardice. Occasionally offsetting this unattractive trait is a winning perky quality, which renders Neill’s Lane as consistently uneven.

Surviving the elements, Superman literally saves the day at the last moment by breaking through a prison wall to halt an electric chair execution. Stylish and moving like quicksilver, this is a helluva open to a legendary season, despite a fidgety debut from Neill.

The Big Squeeze (Dir. Tommy Carr) is noir for the 50s family. Dan Grayson has received a citizen of the year award from the Daily Planet after he was nominated by his employer. Alas, Dan has a past that comes to put the big squeeze on him. Kent is obsessively driven in righting wrongs and finding/allowing redemption. Obsession and redemption are dual, key themes in season two.

The Man Who Could Read Minds (Dir. Tommy Carr) Kent, Olsen, and Lane attend a nightclub act, which features a phony mind-reading swami that leads them to a phantom burglar. The writing is straight out of the 1940s radio drama program tradition. Well-paced, well-acted, and a stylishly suspenseful entry. Reeves steps back, allowing the (considerable and authentic) chemistry between Neill and Larson to breathe. Mutual respect and generosity between cast members was developed early and is a testament to their longevity. 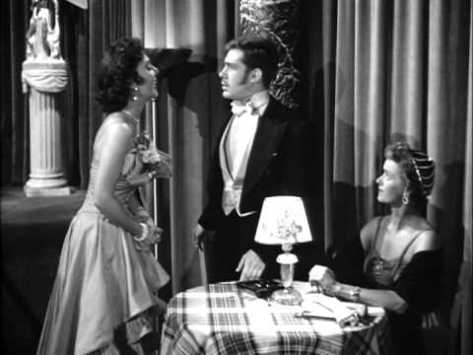 Jet Ace (Dir. Tommy Carr). Perry White’s nephew Chris is a jet ace pilot with a confidential report for top-secret eyes only. He is kidnapped and it’s up to Kent/Superman to prevent government files from falling into enemy hands. And Hillary thought she had problems. Needless to say, Kent is up to the job as is cast and crew in this superior Air Force oater. In this half hour setting, perfect for its topic, there’s no time allotted for celebrity pandering or Tom Cruise-like prancing. It’s a full-throttle narrative without a minute wasted.

Shot In The Dark (Dir. George Blair) is in no way related to Blake Edward’s Pink Panther. Rather, it’s about an accidental lens capture of Kent’s alley transformation. However, other dark room secrets emerge along with a shadowy underworld figure believed to be dead. The story was reportedly taken from the daily newspaper comic strip. Sly nods to Hitchcock-like voyeurism abound and guest star Vera Marshe is a scene-stealer as Mrs. Harper. Her shrill, comedic timing is pitch perfect (and with a threatening fifties dress which could kill if moving too far in the wrong direction, it’s no wonder Perry White sends her packing off to Kent). Marshe’s performance is matched by Larson’s multi-faceted Olsen. 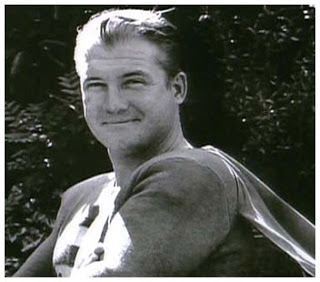 The Defeat Of Superman (Dir. Tommy Carr). Gangster Happy King has returned to Metropolis and wants to make a deal with Superman. “No deals.” King has a mad scientist at his disposal and he’s played with full-blown ham zeal by character actor Maurice Cass, who could give both Bill Shatner and Ricardo Montalban serious competition in scene-chewing. Such over the top eyebrow arching works here, especially when he’s equipped with a kryptonite gun, ordered straight from the Acme warehouse. Lane and Olsen come in handy when disposing of the green rock, which Kent hurls into space. Unfortunately, for King and company, the offending rock (wrapped in a pipe) comes-a-crashing into their windshield, sending them off a cliff to a fiery fate below. Only in this type of melodrama could such an outlandish, improbable finale be pulled off. This is the first appearance of kryptonite in TAOS and it’s all the better for it. Reeves leads a fine cast who approach both role and narrative with the earnestness required to convince us. They do, with flying colors. 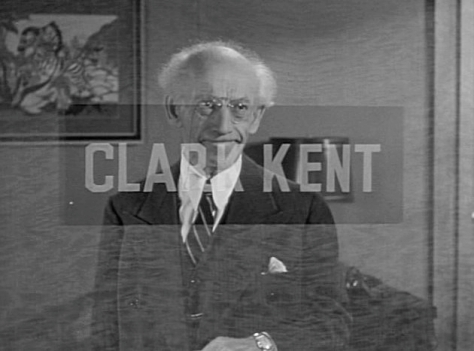 END_OF_DOCUMENT_TOKEN_TO_BE_REPLACED

Under Kellogg’s sponsorship, the second season of The Adventures Of Superman began steering away from its adult audience. By the third season, the show was aimed almost solely at the pubescent. It was also shot in color, which made it an expensive production with less money allocated for actors or professional writers.  Oddly, it was only aired in black and white, not having its color premier for another decade. In this, Kellogg’s was ahead of its time, realizing that color, being inevitable, would assure the series a long syndication run.

With the third season,this is an entirely different series than the first two and, with few exceptions, it’s a dreadful affair. The series’ decline continued until its final, sixth season. Although officially cancelled, The Adventures Of Superman had been picked up for a seventh season with star George Reeves coming in as director (he had helmed three, late episodes in season six) and, reportedly, more money was going to be spent on better scripts. However, Reeves’ premature death put an end to a series which began high and should have bowed out on a better note. Alas, like its star, it was not afforded a happy ending.

The cast still has charisma, but even they can’t save the worst episodes, many of which are excruciating and virtually unwatchable. Still, The Adventures of Superman, with I Love Lucy was the longest running series of the fifties and maintained its popularity (with reruns) for another three decades in syndication, which is almost remarkable given that its lead, who had presented something of a super boy scout image, had in fact been ousted as quite the colorful character, engaged in a sordid affair when he was found dead, allegedly by his own hands.

The third season opens with the godawful Through The Time Barrier (dir. Harry Gerstad) and the Daily Planet staff (all four of them) being teleported to the Stone Age via Professor Twiddle (Sterling Holloway in his last series appearance). The look on Reeves’ face (in stills below) speaks volumes.

The Talking Clue (Dir. Gerstad) is marginally better. It’s about a bank robber named Muscles McGurk and focuses primarily on Inspector Henderson. Shane enjoys the spotlight and our enjoyment factors primarily from his.