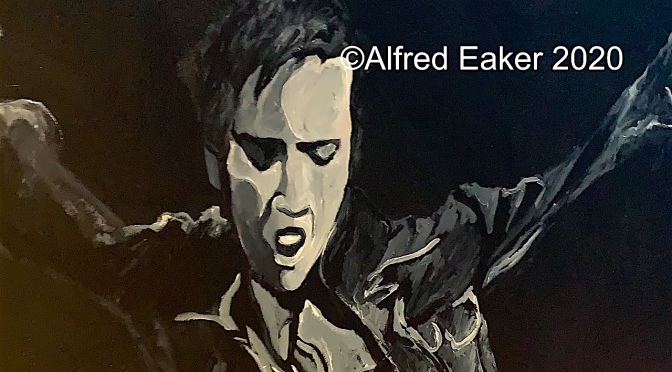 As an American artist, he has always been deeply engaged into the social and political climate of his country. Eaker is currently working on a project entitled “American Trilogy.” Through it, Eaker is trying to bring affirming answers to issues of race, integration and hope so desperately needed at this moment in America. 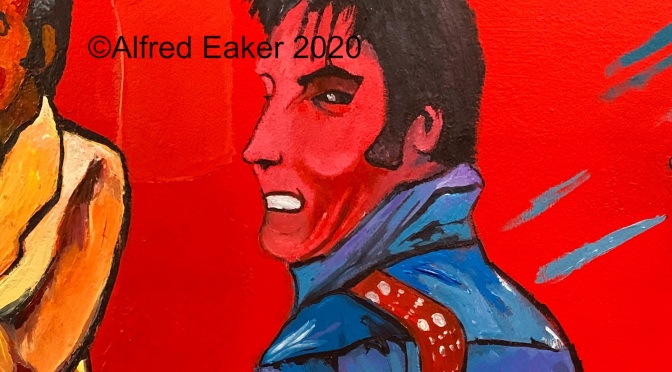 It’s interesting in that originally I found this song thick in laying on the sentimentality and a bit schmaltzy. It doesn’t seem so at all today, Indeed, with everything surrounding us, it seems more relevant than ever.

Then, as I read this in a FB group today, I discovered a bit of background about it. Presley and his producer were set to record it when Presley’s manager, Tom Parker, voiced an objection, citing that it was “too political and too controversial.” Presley overshot his manager’s objections with a memo, “did you grow up poor? We’re recording this song.”

Since his death, there’s been a tendency to label Presley a racist, he stole black music, etc. These comments are always made by people who never met him and yet it’s easy to see why that is assumed; after all he was southern, politically conservative, and a redneck (he was). It only goes to stand… only it doesn’t.

Presley was raised in a black Pentecostal church. It was the music he knew. He grew up dirt poor in a racially mixed neighborhood.  No one who knew him, either well or casually, makes claims of his being a racist; quite the reverse, indeed they vehemently deny it,  and peers such as Chuck Berry, James Brown, and B.B. King frequently tried to set the record straight and quash the myth of his being bigoted.

It matters, even today, so many years after Presley’s decline and self-willed death because, even if unintentionally,  he serves as a model of sorts;  one can be southern, politically conservative, and even a good old boy, without mantling systematic racism or traditions of white supremacy.  The late Little Richard called Presley an integrator. “In the Ghetto” is perhaps the Presley song that best manifests Richard’s claim and advocates the long past due need for cultural and spiritual integration.

As an American artist, he has always been deeply engaged into the social and political climate of his country. Eaker is currently working on a project entitled “American Trilogy.” Through it, Eaker is trying to bring affirming answers to issues of race, integration and hope so desperately needed at this moment in America. 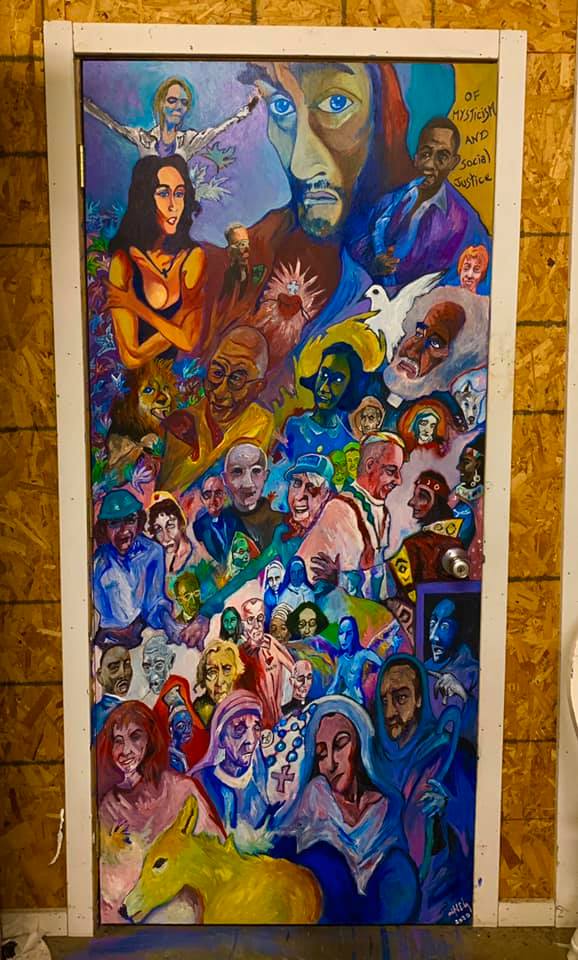 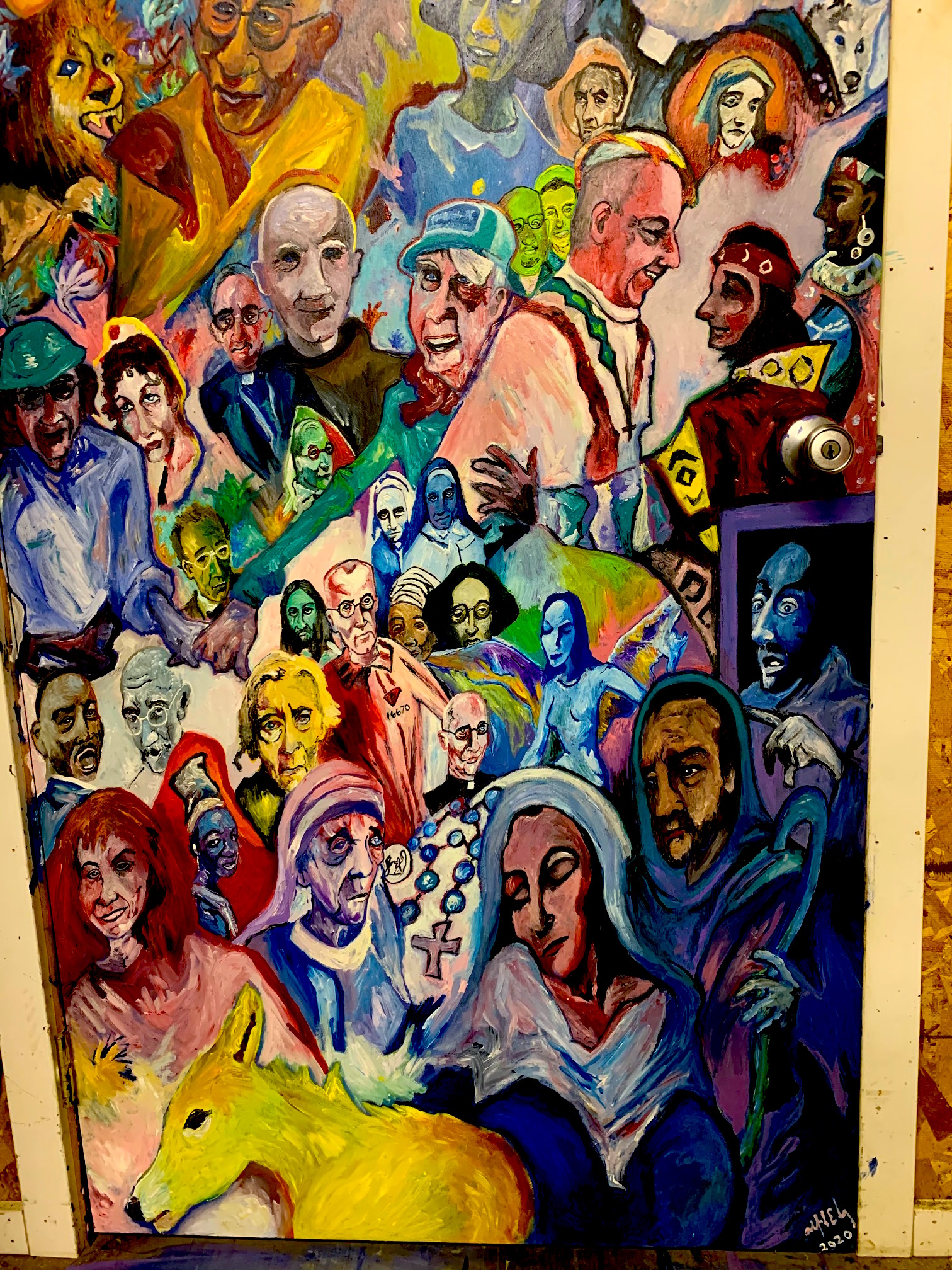 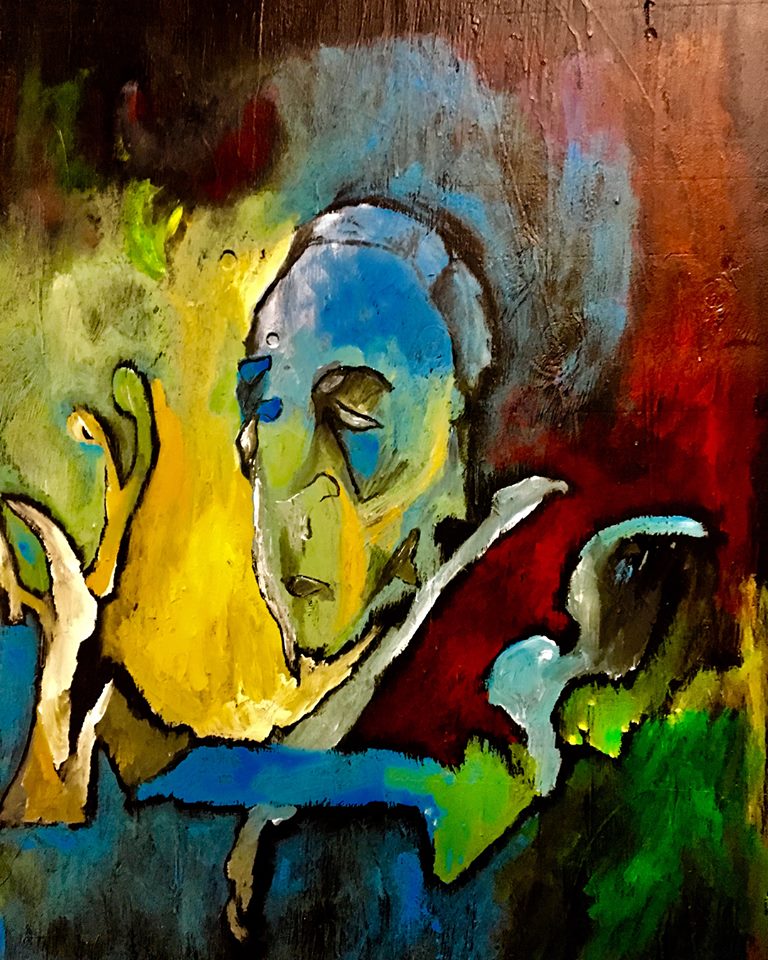 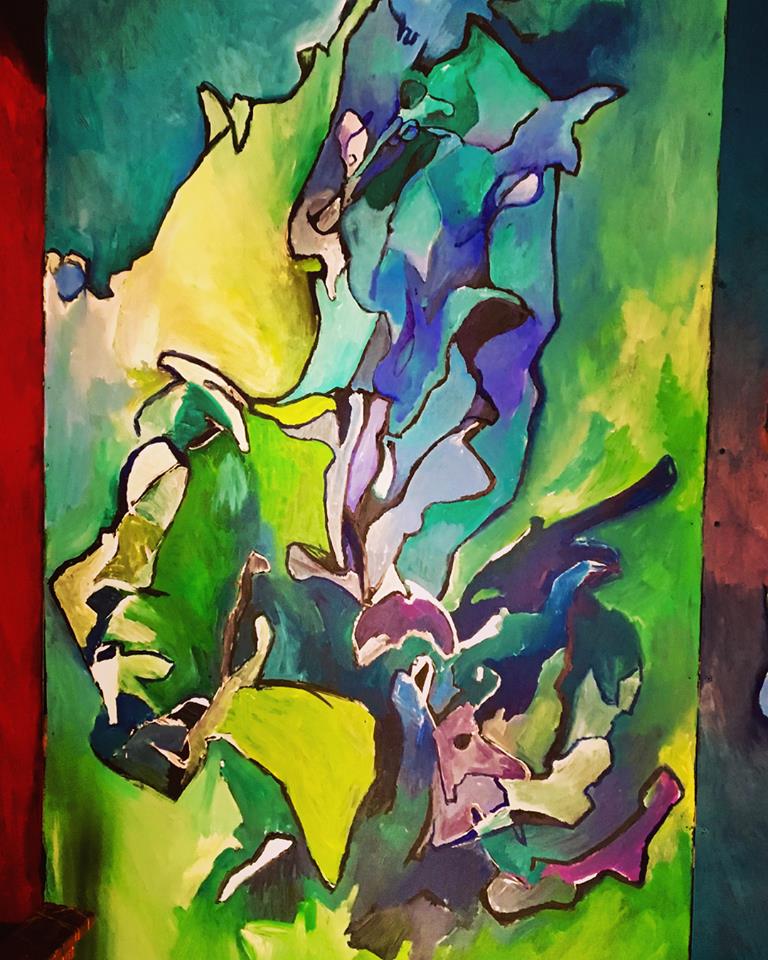 These are 15 -8ft x 4ft paintings on wood panels. Being raised in an extremely conservative Pentecostal environment, I was paradoxically also pursuing artistic endeavors and exposed to the music of Wagner early on. Taking my drawing pad to church, I rebelled by creating a fictional preacher named Brother Cobweb (the novel about the character is being published next year). 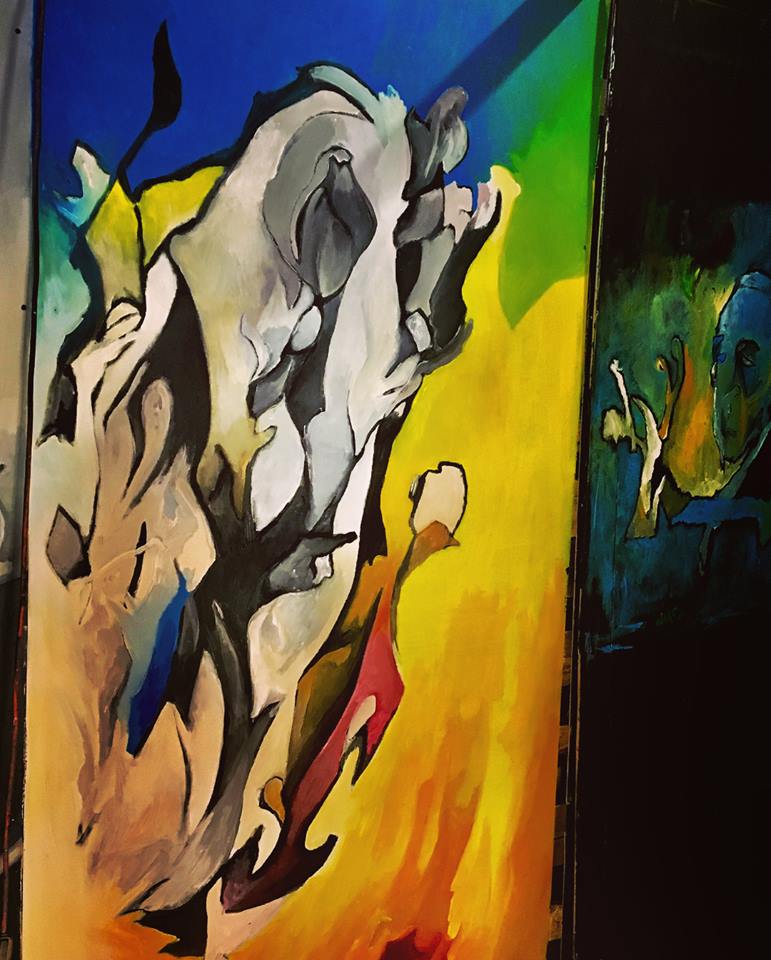 Years later, in 1980, PBS announced the airing of the Pierre Boulez/ Patrice Chereau Ring Cycle. Researching Boulez, two quotes resonated: “Whenever there is extreme conservatism, there is an explosion of revolt,” and “ We must by cultural omnivores and raid all the art forms to enhance our own medium.”

Boulez’s Ring was as radical as promised and in the late 80s, I began to see him often in concert; mostly in Chicago and Cleveland. As I did in that church, I took drawing pads and drew Boulez conducting his own music, Schoenberg, Berg, Webern, Mahler, Bartok, Ravel, Debussy, Varese, and Augusta Read Thomas. I drew quickly, without looking at the paper and over a span of some fifty concerts, produced thousands of rough sketches, some of which I did paintings from. 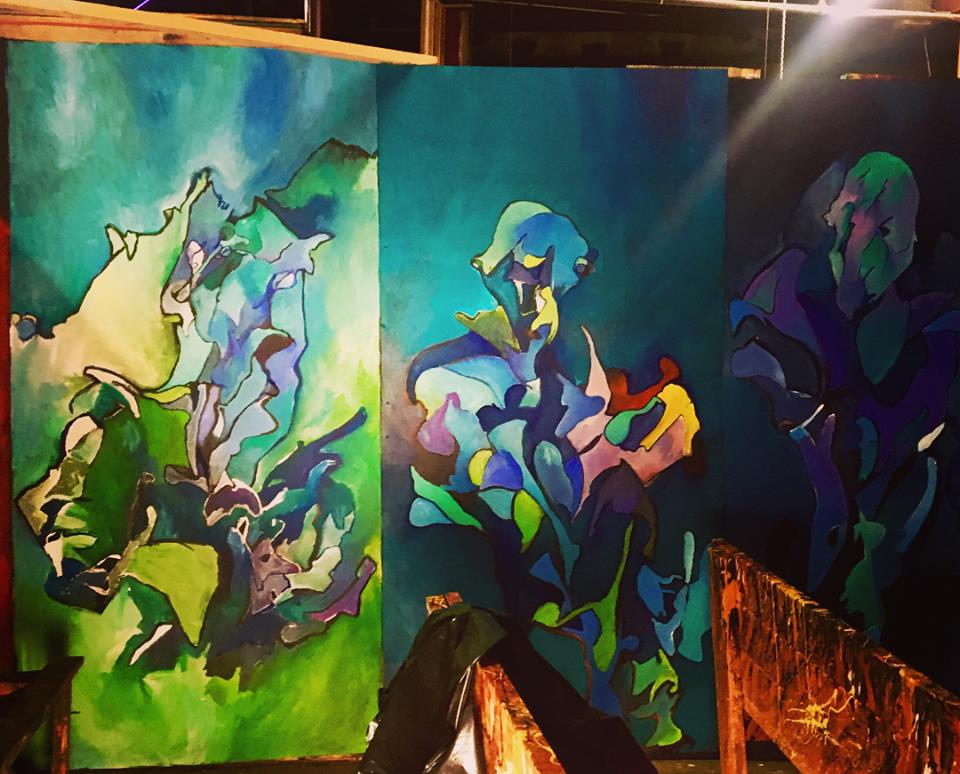 When I moved to Portland and was hired as a muralist for the House of Shadows, I was given my own Church of Brother Cobweb where I perform the character. This year, I created for the Church this Boulez mural for its “stained glass windows.” Most of the paintings are taken from Boulez conducting in Chicago; others in Cleveland. That they are on wood, for me, echoes the diaphanous spikiness found in some of the music. This is my idiosyncratic scoring to a twilight of the tiny god: Brother Cobweb. Alfred Eaker. 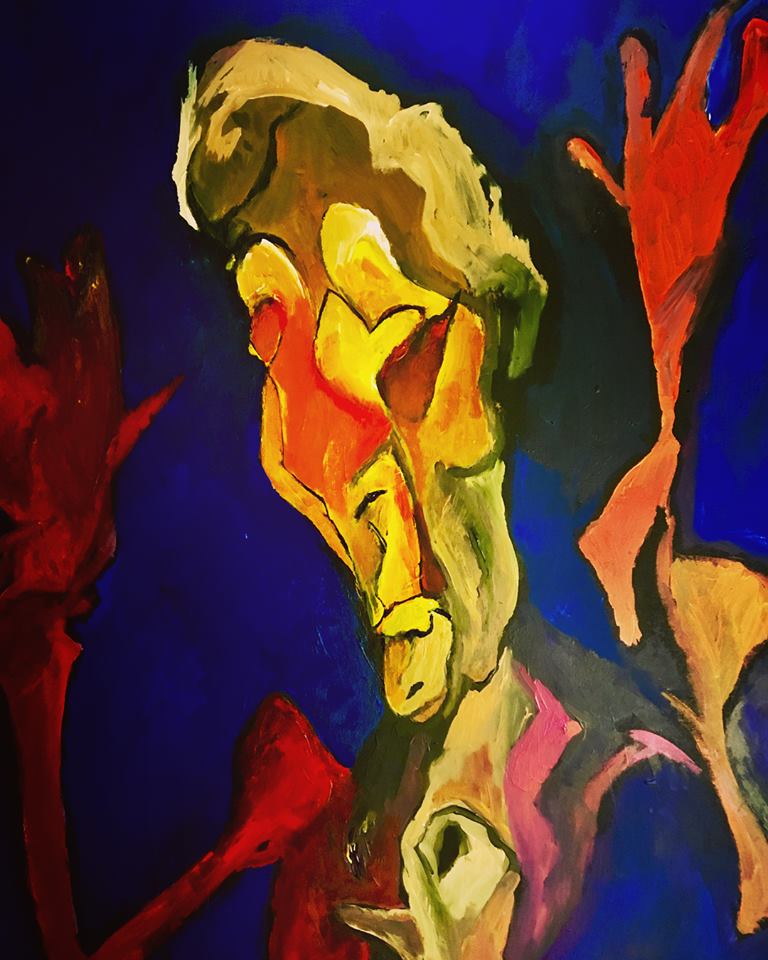 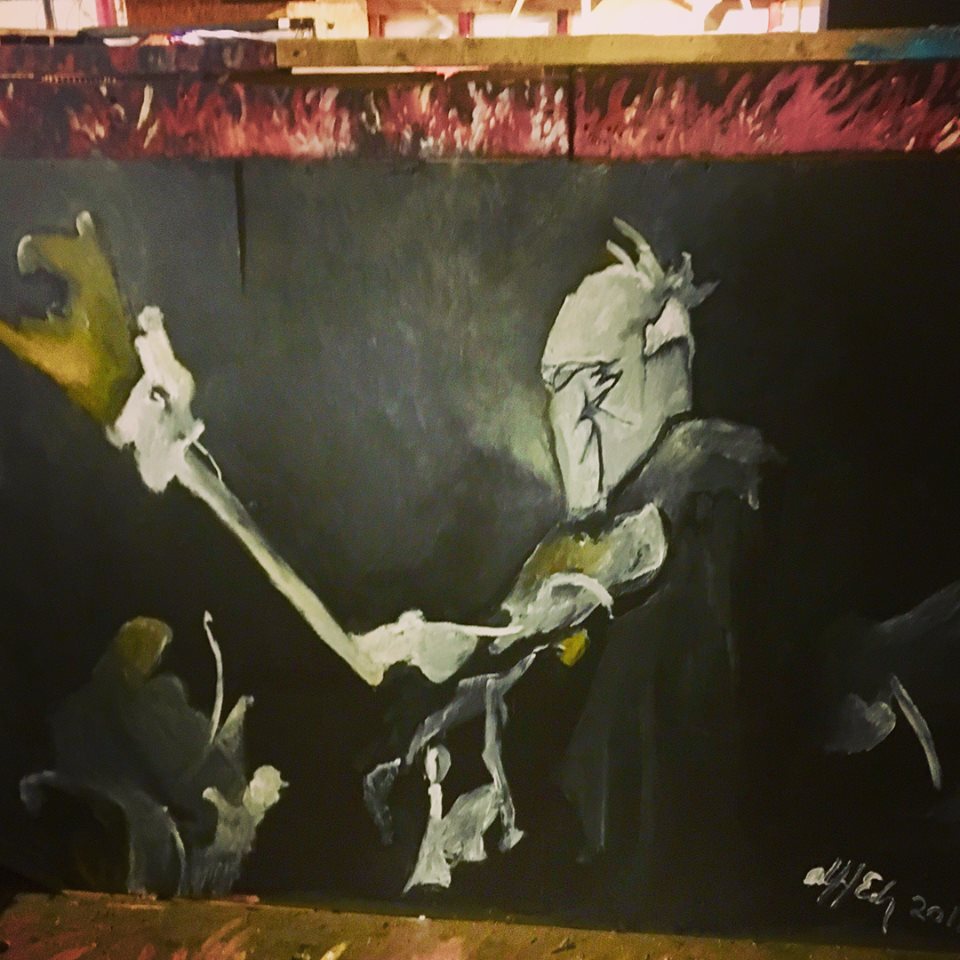 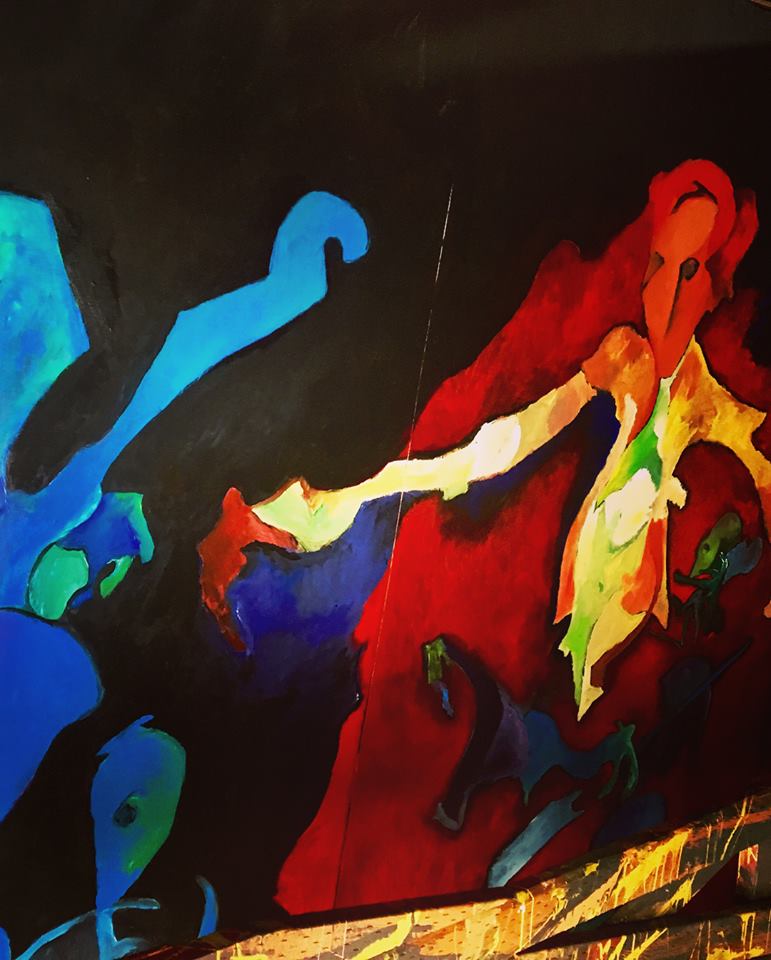 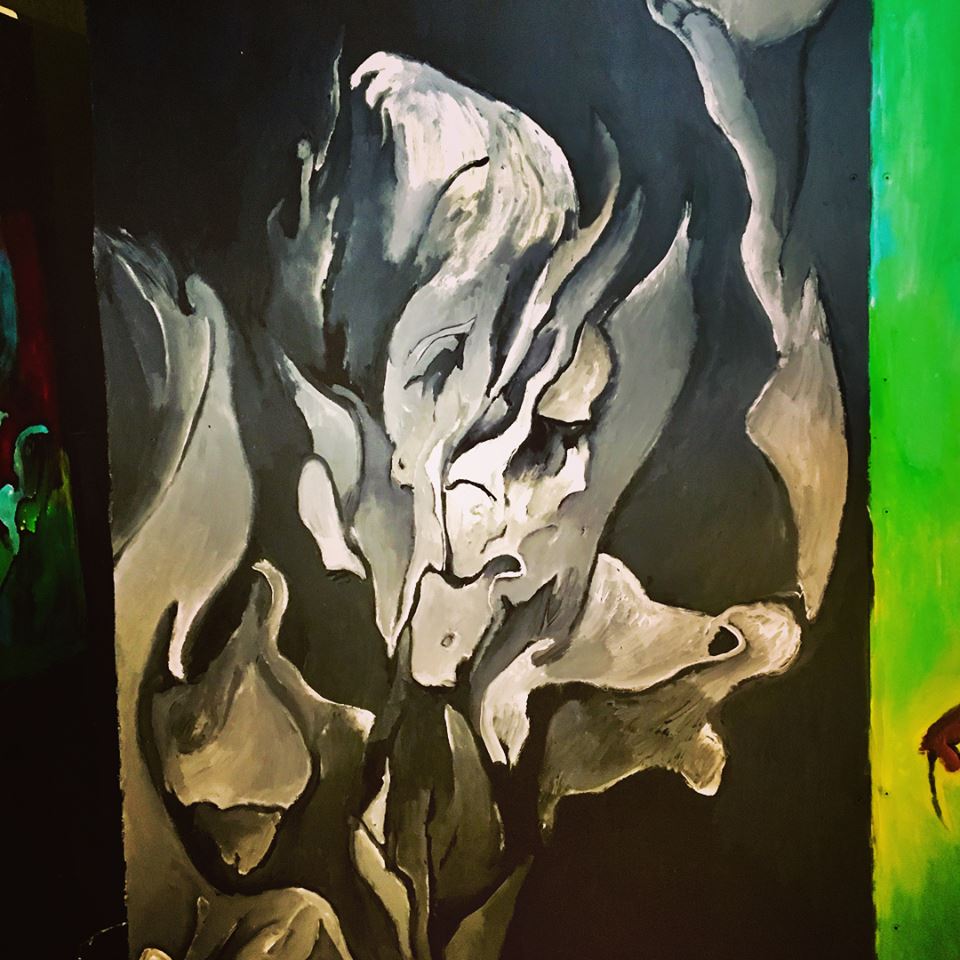 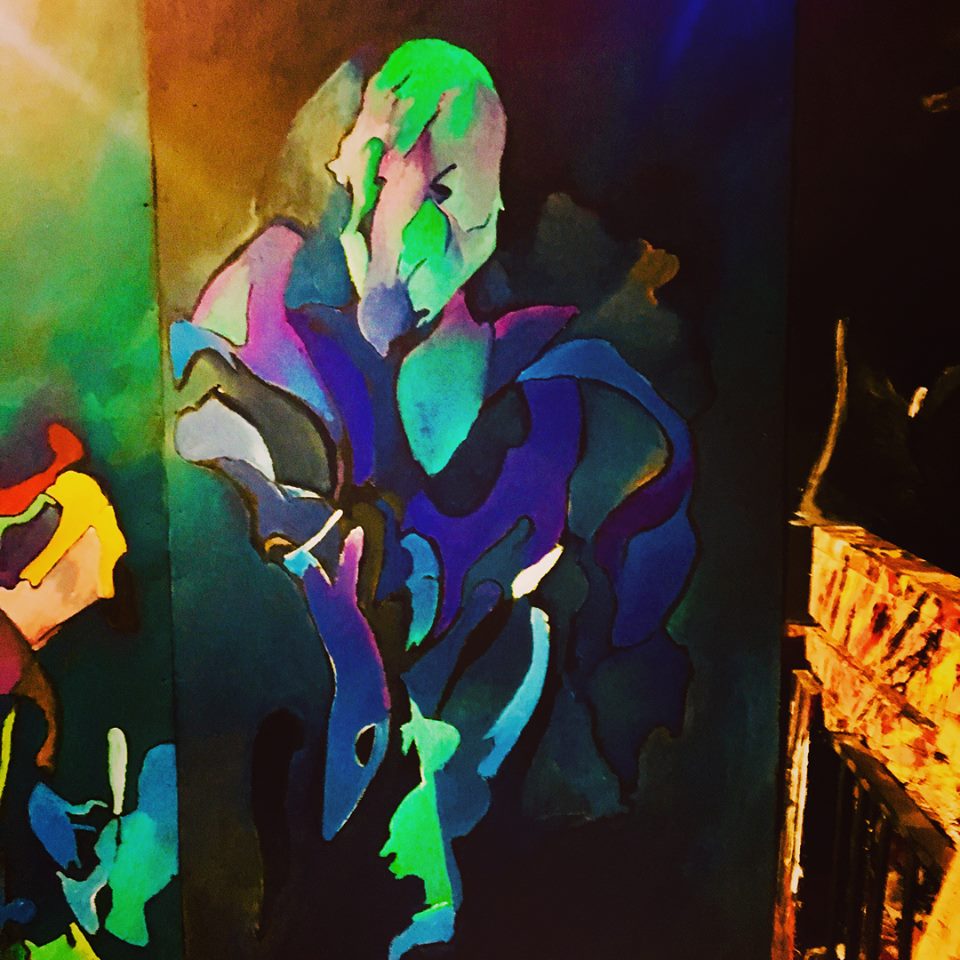 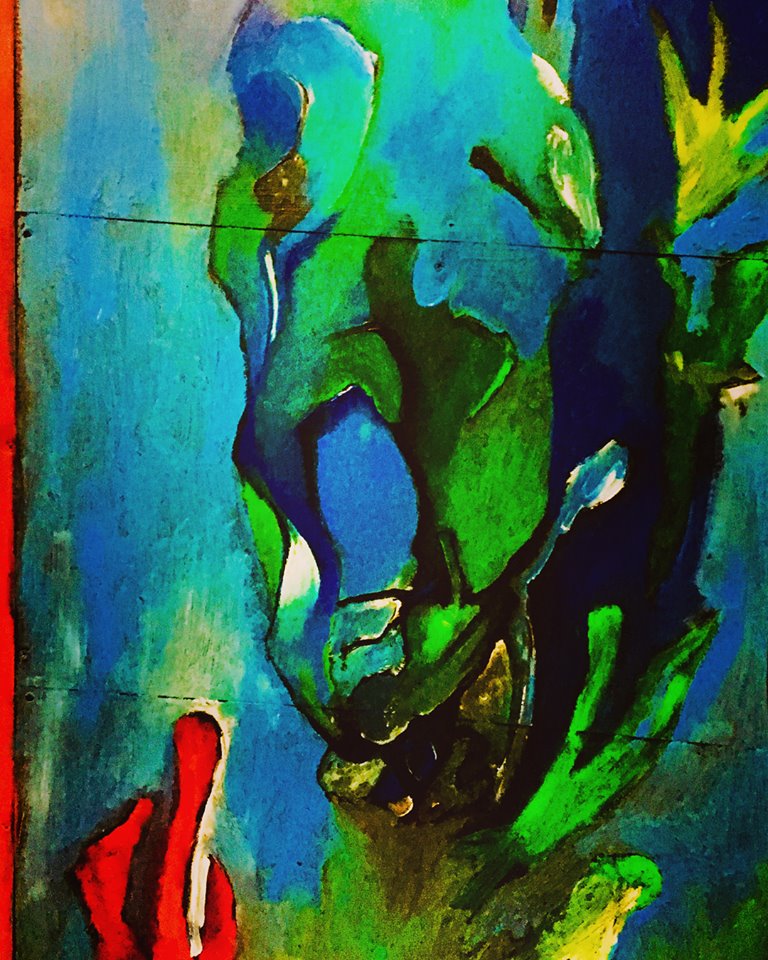 From 1999 to 2000, I painted a mural, in oils, for St. Vincent De Paul client food choice pantry in Indianapolis, having been commissioned by Carolyn Reifel, who was the director of that facility. It took nearly a year. The mural was a donation btw, and we followed that with an art auction. Numerous local and national artists donated their work(s) to the auction in an effort to raise funds for the pantry.  The mural spanned several walls, on  dry wall. I began the mural with images of two priests who were and are still considerable influences in my life; Fr. Justin Belitz O.F.M and Fr. Hilary Ottensmeyer O.S.B.

Fr. Hilary, who had introduced me to Fr. Justin, passed away a mere two weeks after completion of the mural in 2000. I was blessed by his being able to see the completed mural before he passed this temporary coil.

The above are some images and a Nuvo article I came across. One note about the article: It seems to indicate that the auction was not well attended. While we did not have the turn out we had hoped for, over the course of the evening it was indeed fairly well attended and we raised enough money to feed one hundred families for a year.

Tapping back into my thinking from twelve years ago, I entitled the mural “Modern Spirituality” from the mindset of a post Vatican II Catholicism and an ecumenical, inter-faith spirit.

Fr. Justin Belitz and Fr. Hilary Ottensemeyer are representative of that post Vatican II Spirituality. Their images graced several walls of the mural, as did images of Mother Teresa, Pope John XXIII, Our Lady, Gauatama Buddha, and scenes from a charismatic, protestant church service.