Tales from the Crypt (1972, directed by Freddie Francis and written by Milton Subotsky) is the first of two anthologies directly adapted from Amicus’ spiritual inspiration, EC Comics. 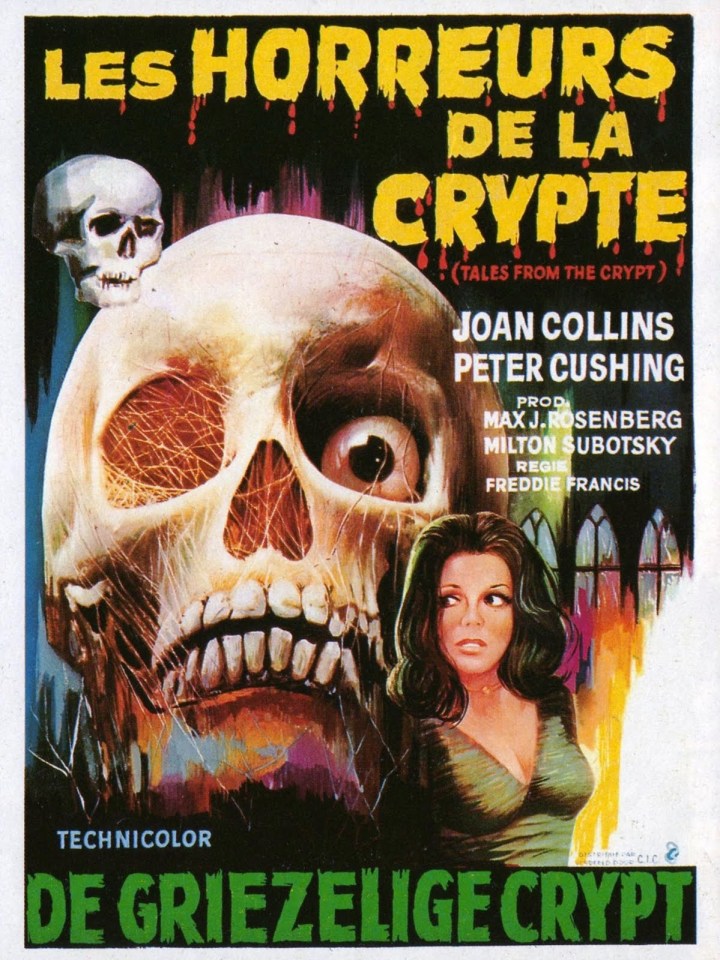 A group of five explorers encounter a crypt keeper (no, not that one, but rather  Ralph Richardson as a hammy monk) in an underground cavern. Each are shown the fate that awaits them. 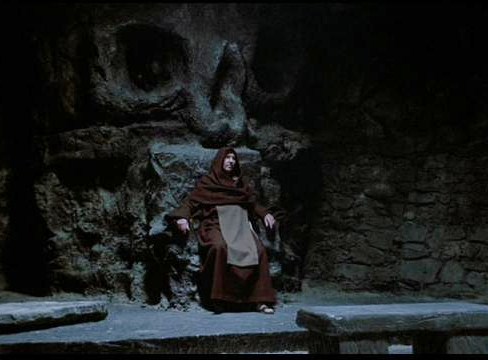 “And All Through the House” taps into Francis’ best qualities, making for an excellent opening segment. While her daughter is sleeping fitfully upstairs waiting for Saint Nicholas to arrive on Christmas Eve, Joan Collins is smashing a poker over her husband’s skull so she can collect his insurance money.

Meanwhile, an inmate has escaped from a nearby asylum, dressed as Santa Claus, and someone is going to open the door. Collins is, naturally, perfectly cast as a bitch from hell in the guise of a sex bomb.

The dialogue is pared down to bare minimum, making this a visual segment, alight in Christmas colors and blood, and choreographed to holiday music. It’s the original Silent Night, Deadly Night.

“Reflection Of Death” is the weakest link here, about an adulterer (Ian Hendry) who leaves his wife and kids and suffers the consequences when his car crashes. Its twist ending is disappointingly inevitable, but Francis (barely) holds our attention with some innovative POV perspectives.

“Poetic Justice” features a superb, moving performance from Peter Cushing as Grimsdyke. He’s one of those despicable poor people: you know the ones who are always looking for free stuff, health insurance, and government handouts, just like the ones Jesus used to kick in the ass. Although a little senile, he’s kindhearted, loved by the neighborhood children, and communicates with his deceased wife (who is poignantly represented by a portrait of Cushing’s actual late wife). He’s also hated by his neighbors, especially the greedy, uptight James Elliott (Robin Phillips), who drives Grimsdyke to suicide and… this may be the first and only film of a zombie with an elegiac heart, forced to rip out the heartless. Cushing channels his grief to craft what may be his finest character acting.

“Wish You Were Here” is a pallid reworking of “The Monkey’s Paw,” and delivers a “moral lesson” about being careful what you ask the genie for and how you ask it. Neither Richard Greene (as a zombie) nor Barbara Murray can salvage it.

“Blind Alleys” features Patrick Magee delivering a strong performance as a blind nursing home resident revolting against dictatorial director Nigel Patrick, who is so adept at patriarchal evil that we can’t wait for his comeuppance, which comes in a wham bang finale.

Although all of the Amicus anthologies had been profitable, Tales from the Crypt was their biggest box office hit (no doubt in part due to the built-in fanbase of EC Comics), so much so that instead of waiting a few years, the studio immediately went into production of…