An eclectic study of cinema should include the oeuvre of Mario Bava. He was overlooked by serious critics for decades. It was genre fans who kept whispering Bava’s name until it reached an echo and reverberated in critical circles. Called The Father of Italian Giallo Cinema, he influenced the likes of Dario Argento, Lucio Fulci, and Quentin Tarantino (among others). Predictably, Bava’s fan base is given to religious zeal, but his body of work merits immersion in spite of his fanatical cult.

It should come as no surprise that Mario Bava’s original ambition was to become a painter. The son of sculptor and cinematographer Eugenio Bava, Mario found painting a less-than-profitable life goal and followed his father’s footsteps. Landing a job in Mussolini’s film factory, Bava’s apprentice work included lensing numerous films, beginning in 1939. It wasn’t until 1957 that Bava (uncredited) co-directed his first feature with Riccardo Freda: Lust of the Vampire (I Vampiri). 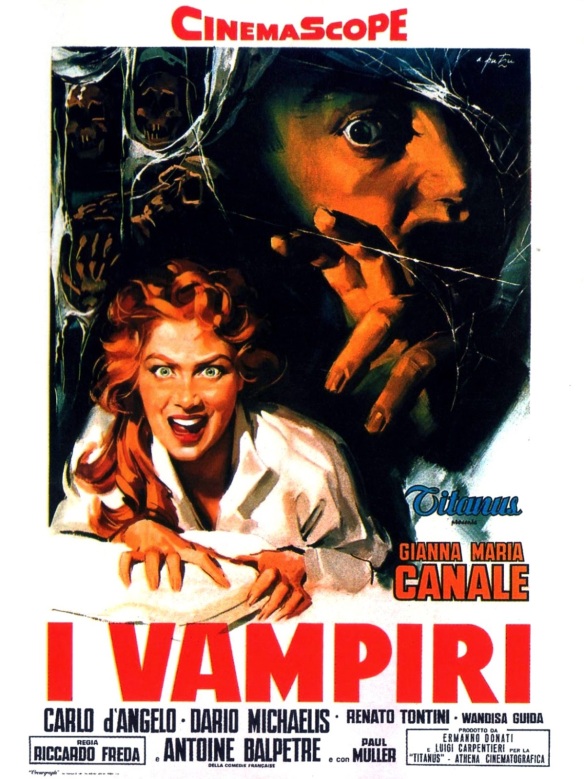 Although neither a great horror film nor a great film, Lust of the Vampire (not to be confused with the later Hammer film, which makes this one look like a masterpiece) is historically important for being the first Italian horror film. There are no vampires to speak of. The victims are the result of surgical horrors, and there’s little doubt that this film was a considerable influence on Georges Franjou’s Eyes Without A Face. Although crisply paced in its 78 minute running time, it’s saddled with dull, verbose characters. Lust of the Vampire teeters toward full-blown Goth cinema, but it also has scenes that hearken back to the mad scientist films of the 1940s; one has to look twice to make sure we’re not witnessing Boris Karloff and Lionel Atwill up to no good in their labs. Visually, it has wonderful set pieces and almost surreal matte-work standing in for Paris. A portentous spiraling stairwell, shadow-doused laboratories, decaying beds, skulls falling to the floor, nooses inexplicably dangling from the ceiling, a mist-laden forest, an ornamental tomb façade, secret chambers, and beautiful women injected with serum transforming into withered drama queens all add up to an evocative early Italian horror. Gianna Maria Canale has the standout performance as Giselle du Grand, smoking cigarettes in front of mirrors. There’s a lot of debate as to how much Bava directed. The film has elements that could be attributed to the styles of both artists. Although Bava is clearly the superior director, Freda (who co-wrote the script) went on to make the effective Terror of Dr. Hitchcock (1962) and it’s sequel The Ghost(1963), both with Barbara Steele. Freda walked out mid-production (for unclear reasons), leaving cinematographer Bava to finish the directorial duties for the remaining shooting schedule. Reportedly, the film was heavily censored by Italian “moralists,” which resulted in scant showings and rendered it a financial loss. Image Entertainment released a superlative DVD of I Vampiri, but it’s currently out of print.

Freda and Bava re-teamed as co-directors for 1959’s Caltiki, the Immortal Monster, which lays claim to being one of the earliest Italian science fiction films (Bava had served as a cinematographer for the very first Italian sci-fi, The Day The Sky Exploded, in 1958 and, according to some sources, co-directed it as well).

Apparently inspired by The Blob(1958), Caltiki far surpasses its source material (which isn’t hard to do). Set in Mexico City, the opening narration gives a brief synopsis of the ancient Mayan civilization, the mystery of its demise, and warns of an evil Mayan deity, known as Caltiki, the Immortal Monster. The opening is unabashed Bava: an archeologist runs, terrified, through an eerily lit jungle as a volcano erupts in the distance. He makes it to his campsite and leads the group back to the Mayan ruins he had stumbled upon. Finding a long-lost temple, the archeologists succumb to avarice, which leads to the unearthing of Caltiki; a Blob of a god who melts away skin and mental faculties. The FX are grisly for the time period, but shock value always dates, and it’s the Bava touches (excellent matte work and cinematography) that still seem fresh. Although well-paced, the writing is a pastiche filled with cardboard characters.

Bava co-directed 1959 The Giant of Marathon with Jacques Tourneur (!), which would be a typical Steve Reeves sword and sandal opus, were it not for Bava’s camera work on some of the elaborate (and bloody) battle scenes (including an underwater confrontation). Of course, it has lots of cleavage—from both sexes. It’s hokey as hell, and while it hardly represents the directing craftsmanship of Tourneur, it does highlight Bava’s superb camera work.

With the box office success of Marathon, Bava was finally given his own film to direct solo, and the result was Black Sunday. This horror classic remains Bava’s most famous film and is covered here in greater detail.