The iris of Ingmar Bergman‘s Cries and Whispers (1972) is a red deathbed of intense and frightening passion unequaled in the whole of cinema. As the filmmaker himself indicated, Cries and Whispers is a film predominantly told by color. I first encountered Cries and Whispers in the early 1980s and it lingered: an unforgettable, altering experience. The only thing I can compare it to is the first time I stood before one of Pablo Picasso’s rose period paintings of a maternal subject. It stirs you in a way that makes you feel simultaneously alive and small, and glad to be small before an authentic artist whose mastery is so expressively humane as to be hypnotic and humbling. As filtered through the abdominal lensing of Sven Nykvist, Cries and Whispers imparts a vision of infinite beauty. 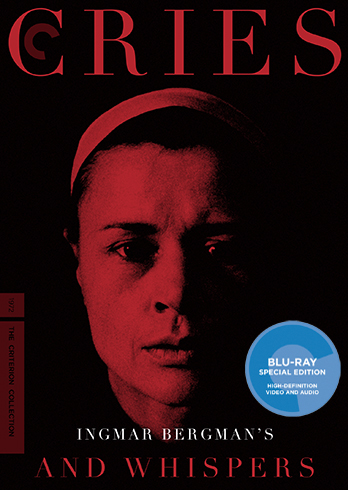 This is a female world, taking place over a period of two days in the life of four women. Yes, it is also about the dying process and death, but accompanied by resurrection and endowment.

At her English manor, the 40-ish, matronly Agnes (Harriet Andersson) is dying, and this is not a stylish, incandescent death. She is in unspeakable agony amidst her kitsch surroundings. Watching this film again recently, it gripped me personally, having spent two days with my father dying of the cancer that brutally and unmercifully took away his life; quickly, but not quickly enough. And that’s why Cries and Whispers is intimately affecting.

Surrounding Agnes are her sisters, Karin (Ingrid Thulin) and Maria (Liv Ullmann), along with her loyal peasant servant, Anna (Kari Sylvan), who maternally responds to Agnes’ needs. She cradles Agnes and attempts to comfort her. Yet, this is also a film about pain; like a late Edvard Munch painting of feverish icy dreams. As a motherly figure, Anna cannot ease Agnes’ suffering. Like Anna’s biological daughter, Agnes will die.

The sexual symbology is as vivid as those various shades of (red). Agnes, never knowing intimacy (white) is dying of ovarian cancer. Maria’s adulteries drove her husband to suicide. Karin performed a bloody self-mutilation in revenge against her husband. All this segues into the pain of distance, of touching and withdrawing from touch; neither Maria nor Karin can look upon Agnes as she gasps for life. Familial emotional distance parallels the impotence of religious comfort (black). The cleric, there to give extreme unction, utters a prayer that betrays his faithlessness and cluelessness, because before him is the Pieta to which he is blind. Agnes attempts repeatedly to vomit in a basin, but it is to no avail. She parallels the Corpus Christi, cradled by Anna’s Madonna: the sole beacon of faith and the sole embrace who draws her lifeless charge to dry breasts. Yet, Anna gifts a renewal from cancer of the womb. 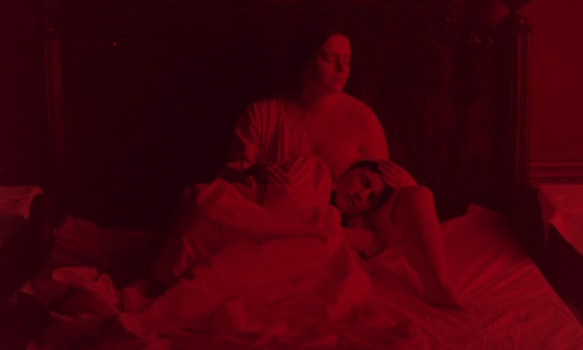 Although faithless herself, Agnes receives absolution, and we hear her alive again in the startling finale. Her voice rises from her journal, and we see the sisters together again in a paradisaical setting: “I wanted to hold the moment fast, and thought, Come what may, this is happiness. I cannot wish for anything better. Now, for a few minutes, I can experience perfection.”

Throughout Ingmar Bergman‘s “Silence of God” trilogy, the divine voice becomes increasingly faint, until the vaguely concluding The Silence (1963), which is the world of a dead God. Whether or not The Silence is related to Through a Glass Darkly or Winter Light is debatable. Bergman himself never referred to the films as being concretely connected. It was later film enthusiasts (and home video marketing) who alternately lumped them together (not altogether incorrectly). 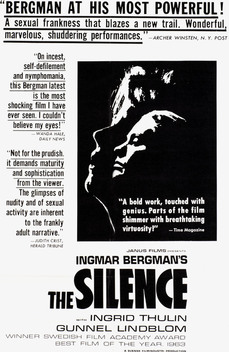 Silence‘s anti-theology theology is prominent in the first lines, when ten-year old Johan (Jorgen Lindstorm) points to a sign in a train compartment and asks his aunt Ester (Ingrid Thulin): “What does this mean?” Her answer is elusive—“I don’t know”—despite the fact that she is a translator. Johan is the son of Anna (Gunnel Lindblom), who sweats sensuality in the stifling heat of the train ride. This is in sharp contrast to the ill Ester. There is tension between the sisters, but we don’t know what birthed it or why it exists, even in the midst of Ester’s dying. Questions are asked for which no answers are given. “Tell me,” Anna asks Ester, “When father died, you said you didn’t want to go on living. So why are you still around?” The closest explanation Anna gives for her contempt for Ester is “Everything has to have desperate meaning for you,” which is telling, as no desperate meaning is given—not even the reason for the opening and closing train trips.

Additionally, there is an ambiguous incestuous relationship between the sisters. Anna taunts Ester with a lie about a sexual encounter, told as if flaunting infidelity. Yet, then she offers: “It just so happens that I was lying.” However, later, an actual sexual encounter is presented, and again Ester is taunted. She asks: ‘What have I done to deserve this?” “Nothing,” Anna answers.

Torn between his reserved aunt and emotionally charged mother is Johan. He is much present. He bathes Anna and hovers over Ester’s death bed. Yet, what is his purpose in the narrative? He wanders the hotel having encounters, from a waiter to a group of dwarves (?); all of which are presented, then abandoned. He serves as a voyeur to Ester’s boozing, cigarette smoking, and reading, and then to Anna’s sexuality. He’s like a series of loosely connected, masturbatory vignettes; a kind of divine figure, and we’re never certain that he exists, even though the film is channeled through him.

Aesthetically, this psychodrama is the most surreal of the trilogy, but there’s precision in its clarity and absurdity. Only a self-assured director could pull it off. Bergman does. 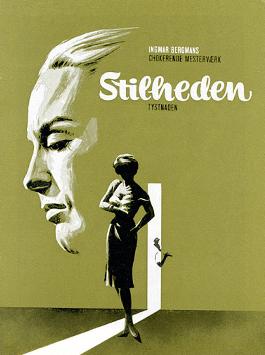