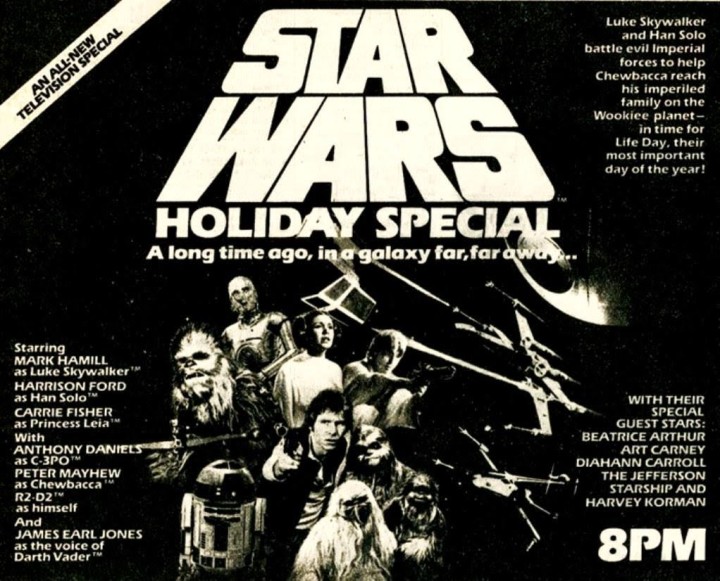 With the release of Star Wars: The Last Jedi (directed by Rian Johnson), it appears that Saint Nicholas has appeased a considerable sector of movie goers in 2017, except for the formula-craving fanatics who were preferring something akin to the pedestrian Rogue One. Johnson’s The Last Jedi, in declining to subscribe to expectations of franchise assembly line lovers, has refreshingly provoked butthurt nostalgists, and revealed what a lot of people already knew: the wrongheadedness of fandom, seen at its silliest and most cult-like in petitions to remove the film from “the canon” and Twitter threats cast at the director.

Of course, the jolly old elf has delivered us a few genuine clunkers over the last seventeen hundred years, among the most notorious being the 1978 “Star Wars Holiday Special” (directed by Steve Binder, best known for the 1968 ‘Elvis Comeback Special”). It’s a made-for-television abomination that George Lucas and company have desperately tried to keep buried, but like bed bugs at night—the damn thing just wouldn’t go away. It’s a good thing too; ’tis the perfect present for infantile palettes. Since its release, “The Star Wars Holiday Special” keeps cropping up in bootleg copies. The late Carrie Fisher even attempted to deny its existence and dismissed it as an urban legend, which only fanned the flames of demand. Despite her protestations, there she is, along with many of the original cast.

END_OF_DOCUMENT_TOKEN_TO_BE_REPLACED

Star Wars: The Force Awakens (2015) is everything George Lucas’ Star Wars prequels promised to be, but fell short of. Director J. J. Abrams finds the pulse that somehow evaded creator Lucas himself: the appeal of Star Wars is not found in Luke Skywalker. Rather, it’s heart is the space age swashbuckler, Han Solo. There is probably nothing duller than the zeal of a religious convert. The prequels convinced us of that by honing in on the Luke-ian brand of mysticism. At its best, Star Wars is more soap opera than opera, but someone forgot to tell Lucas that, and he approached his second trilogy with the seriousness of “Parsifal” (Wagner’s very long take on the King Arthur legend). Without a Han Solo-type to offset all that pseudo-religious mumbo jumbo, crash landings were inevitable. There were enough stand out moments in Episodes I-III to retain the loyalty of an audience who hoped in vain that Lucas would improve; although, for some, Revenge of the Sith (2005) was a payoff.