“Hitch your goose pimples to The Horrible Dr. Hichcock … and away you’ll go, screaming your head off! The good doctor is more than a little strange. He’s a lot loony, and he gets more so with every cute corpse he chops up and every beautiful bride he boxes in. Scary ghosts, black cats, secret doors. What more do you want? But there is more, even more horrible hanky panky than you can imagine in The Horrible Dr. Hichcock. In blood red, ghost green turned blue, and gold fright color.” “Welcome to the mad, mad world of The Awful Dr. Orloff, … END_OF_DOCUMENT_TOKEN_TO_BE_REPLACED

We Westerners hate and resist having our hypocrisy exposed. We get that trait honestly and through tradition, having inherited it from both our Puritan forefathers and Mother England. Both sides of the political and ideological spectrum sow vilification when someone, especially an insider, turns the lens on our own hypocrisy. Thatis true horror; and when an artist does so in film, purportedly the most accessible of mediums, the backlash can be catastrophic. Case in point: Michael Powell’s Peeping Tom (1960). Released the same year as Psycho, Peeping Tom, which is not as overtly violent as Alfered Hitchocks classic, nevertheless opened to furiously scathing reviews from American and British critics: “It is the sickest and filthiest film I can remember seeing” (The Spectator). “The only satisfactory way to dispose of Peeping Tom would be to shovel it up and flush it down the nearest sewer. Even then, the stench would remain” (Derek Hill, writing in The Tribune). Audiences reacted with even more hostility, and it took the French to set the record straight a few years later when Peeping Tom was received there to widespread acclaim and enthusiasm.

Peeping Tom committed an unforgivable sin in lensing the hypocritical voyeurism of both filmmakers and film goers (that Powell condemned even himself in the film did not earn him a pardon). Before 1960, Powell’s career was notable, extensive, and esteemed, which included numerous wartime and post-war collaborations with Emeric Pressburger: 1940’s The Thief of Bagdad, 49th Parallel, The Life and Death of Colonel Blimp, A Canterbury Tale, Stairway To Heaven, Black Narcissus, The Red Shoes, Hour Of Glory, to 1951’s The Tales Of Hoffman. Backlash to Peeping Tomwas cataclysmic, resulting in Powell being permanently blacklisted by both British and American film industries. He was reduced to working (sporadically) for television and producing only three feature films over the next twenty years. That work included a television treatment of Bela Bartok’s opera “BlueBeard’s Castle” in 1963 and 1969’s bitter, semi-autobiographical Age of Consent.

END_OF_DOCUMENT_TOKEN_TO_BE_REPLACED

Black Sunday (1960), AKA Mask of Satan, marked Mario Bava’s directorial debut after twenty years as a cinematographer and uncredited assistant director. This Gothic fairy tale, (loosely) inspired by Nikolai Gogol’s short story The Vij (faithfully adapted as Viy), proved the ideal launch for a director who began life as a painter and son of a cinematographer. Additionally, Black Sunday was the first true starring vehicle for Barbara Steele, making her the first (and, to date, the only) authentic female horror icon. Although both Bava and Steele had long careers following this, neither would ever make as good a film.

Bava’s painterly credentials serve his cinematography well: the forests, crypts, and castles are drenched in lush black and white. Mists, cobwebs, and rotting trees, filtered through Bava’s lens, compose a sensuous ruin. Setting a pattern that he would follow for the rest of his career, Bava’s visual storytelling is far more innovative than is the narrative, which is solid, but routine and simplistic enough to have spawned a plethora of imitators. Contemporary audiences will likely find the story less appealing than 1960 audiences did, in part due to its many offspring, and in part due to its its status as a homage to the Universal Horror classics. Black Sunday is put over with such distinctive vigor that few will be concerned by its familiarity. END_OF_DOCUMENT_TOKEN_TO_BE_REPLACED 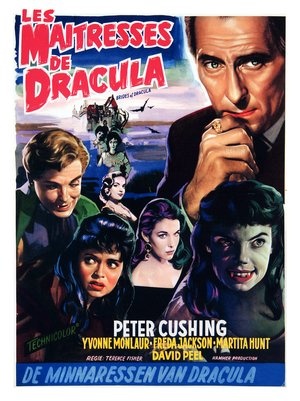 There is a recurring scene, albeit with slight variations,  in Terence Fisher’s trilogy of vampire films—Horror of Dracula (1958), Brides of Dracula (1960), and Dracula, Prince of Darkness (1966)—in which a wise and devout man releases a vampire from the pains of immortal existence. In the Horror of Dracula, Van Helsing releases Lucy, much to the relief of her brother Arthur.  Arthur smiles as he sees the beauty of innocence restored to his sister.   In Prince, Fr. Sandor releases Helen from the curse, as her brother-in-law, Charles, smiles upon witnessing the peace that finally envelops the troubled Helen.   In Brides of Dracula, Van Helsing, introduced as a doctor of philosophy and theology, releases vampire Baroness Meinster (Martita Hunt), at her own request.  After being staked, the Baroness shows a touch of a smile. END_OF_DOCUMENT_TOKEN_TO_BE_REPLACED

The posthumous classification of Bud Abbott and Lou Costello erroneously places them on a level with Laurel & Hardy or The Marx Brothers. However, few, if any, of the Abbott and Costello films withstand the test of time. Their initial rendezvous with a trio of Universal monsters retains some dated charm, but little of it comes from the comedy team. Abbot and Costello Meet Frankenstein (1948) is essentially a vehicle for Bela Lugosi`s Dracula parody and Lenore Aubert’s vamp. The Monster (Glenn Strange) has little to do, and Lon Chaney Jr. seems mightily uncomfortable with the surrounding juvenile antics. Even worse is Bud Westmore’s unimaginative assembly line makeup, which reduces Lugosi’s Count to baby powder and black lipstick and Lon Chaney Jr’s Larry Talbot to a rubbery lycanthrope.

La casa del terror (1960) is a south of the border imitation of Abbott and Costello Meet Frankenstein, along with about a half dozen other films, including King Kong (1933). German Valdes (aka Tin Tan) is Casimiro and, just like in A & C Meet Frankie, he is doing some work in a house of wax horrors, which currently has a real mummy display. Below the exhibit, the Professor (Yerye Beirut) is deep in mad scientist experiments (just like Boris Karloff in his Columbia movies or Lugosi at Monogram). None too surprising, the Professor has an assistant who helps his boss steal bodies and blood. When bodies are not to be found, the two extract fluids from Casimiro, which renders our hero lethargic (at least Lou Costello kept his energy level up). Narratively, having your protagonist sleep through half of the film does not seem like a sound idea. Casimiro’s gal Paquita (Yolanda Varela) doesn’t think so either. After all, she is working a full time job and beau here is one lazy sot! Perhaps the all too repeated shots of Casimiro counting sheep are not necessarily a bad device after all because when he does wake up, he breaks into comedic patter which actually makes Lou Costello look funny again. Valdes elicits more groans than laughs and he even engages in a song and dance number with Valera. YES, IT’S A MUSICAL TOO! Valera does not have to work hard at making Valdes’ musical talents look pedestrian. END_OF_DOCUMENT_TOKEN_TO_BE_REPLACED