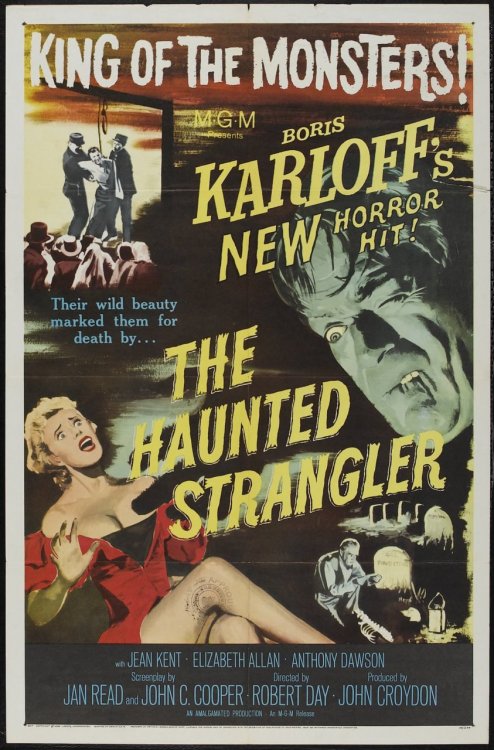 In 1958, producer Richard Gordon offered Boris Karloff a two-picture deal with director Robert Day. The dual productions, The Haunted Strangler and Corridors of Blood, would be A (or A-) budget productions, providing the actor a starring role and a salary to match. Karloff jumped at the offer. It had been twelve years since his last star-quality vehicle, the Val Lewton-produced Bedlam (directed by  Mark Robson). Since then, Karloff had been stuck in character parts (1951’s The Strange Door, 1952’s The Black Castle), playing opposite Abbott and Costello (1949’s Abbott and Costello Meet the Killer), or crap (1954’s The Island Monster and 1957’s Voodoo Island). He had fared better in television (as one of the few big screen stars of the time who had no qualms jumping to the small screen).

The Haunted Strangler is often assessed as the lesser of the two Day/Karloff films, with the actor at his hammiest since 1934’s The Lost Patrol (directed by John Ford and featuring Karloff’s worst performance). Much of the film’s considerable budget went into expensive sets and into securing its lead actor, which unfortunately short-shifted the makeup department: Karloff’s Hyde-like transformation is reduced to the actor tilting his head, mussing up hair, twisting his hand into a claw, and biting lower lip. It is distracting as hell, and critics have been divided on assessing his performance as a whole. Another oft-cited critique is the predictable storyline. In its defense, classic horror fans usually rely on the overused virtues of atmosphere. There are also lurid elements of exploitation (champagne-soaked cleavage,  Busby Berkeley-inspired can-can crotch shots, gruesome murders of women, floggings, bedlam abuses, broken glass to the face, etc) to keep up the interest.

END_OF_DOCUMENT_TOKEN_TO_BE_REPLACED

Only Orson Welles could produce a masterpiece out of a film starring Charlton Heston as a Mexican. Of course, the story of Welles’ rise and fall is practically legendary. At 26, he made that greatest of American films, Citizen Kane (1941), which took on newspaper magnate William Randolph Hearst in a thinly disguised biopic. Welles’ was already at work on his second film, The Magnificent Ambersons(1942) when the backlash from Kane sent RKO into a panic. Fearing another flop, studio executives took Ambersons away from the young filmmaker, gave it a happy ending, and recut it. The result was a truncated masterpiece, which should have been the equal of Welles’ first film. Welles’ was practically … END_OF_DOCUMENT_TOKEN_TO_BE_REPLACED

Writer Dalton Trumbo was one of the infamous Hollywood 10, that list of 10 Hollywood screenwriters whose political leanings got them blacklisted, jailed and kicked out of a guild they helped create. Hollywood did to them what the Germans did the “degenerate artists” twenty years before. Trumbo was probably the best of these writers and wrote a mind boggling number of excellent scripts, from his bathtub, as he smoked through 6 packs of cigarettes with his parrot on his shoulder, cheering him on. Only such an eccentric original could have fashioned Terror in a Texas Town (1958). Team Trumbo with B-movie maestro Joseph “Wagon Wheel” H. Lewis and a cast of idiosyncratic character actors and you get a peach of movie such as this.

Trumbo wasn’t the only victim of the HUAC (House Un-American Activities Committee) associated with this film. Actors Ned Young and Sterling Hayden were also called before the committee. Young was also a screenwriter. Jailhouse Rock(1957), The Defiant Ones(1958), Inherit the Wind(1960), and The Train (1964) are among his credits, most of which he wrote under pseudonyms. Young refused to cooperate with the HUAC and was blacklisted as well. Hayden caved into the committee and gave them what they wanted, which cost him much in the long run. All this has given Terror in a Texas Town a cult status as a quirky reaction to the HUAC. The reputation is well-deserved.