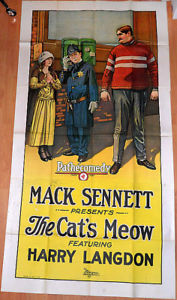 Charlie Chaplin said he “only felt threatened by Harry Langdon.” Samuel Becket wanted Langdon to act in his experimental film, but had to use Buster Keaton after Langdon’s early death. James Agee, Kevin Brownlow, Walter Kerr, Robert Youngson, Harold Lloyd and Mack Sennett were among those who sang high praises for Langdon’s art.

Langdon’s characterization expressed the most pronounced silence of the era’s clowns. This is why, despite his fans’ claims (seen on the documentary included on “Lost and Found: The Harry Langdon Collection”), sound proved completely disastrous for him. Langdon’s persona was only suited to the abstract plane that silent cinema offered.

END_OF_DOCUMENT_TOKEN_TO_BE_REPLACED

Buster Keaton‘s Seven Chances (1925) features the greatest chase scene in silent cinema. It is a typically no-holds barred, Keatonesque climax. The film also highlights Keaton’s major flaw: his inability to rise above the racism of his society. This is a flaw that cannot be ignored; it factors into our moral and aesthetic assessment of the artist. The transgressions are brief here, but blatant and repeated. Surprisingly, the frequent debates pitting Chaplin against Keaton rarely consider this factor. Or perhaps it is not so surprising. On just about every list imaginable, D.W. Griffith ranks near the top of all-time great directors, despite the fact … END_OF_DOCUMENT_TOKEN_TO_BE_REPLACED

Buster Keaton further explored his fascination with the west in his feature Go West (1925). Keaton had previously parodied the westerns of William S. Hart in Frozen North (1922) and Go West is a further development of that exploration. Go West, however, is more influenced by Charlie Chaplin than by Hart; it has qualities which have to come to be termed as “Chaplinesque”, albeit filtered through “Keatonesque” sensibilities. It is said to have been Keaton’s personal favorite among his features, enough that he took solo directorial credit, which was rare for him. Go West is the romantic (and odd) story of a cowhand drifter and his cow, with a girl in the very … END_OF_DOCUMENT_TOKEN_TO_BE_REPLACED

Robert Wiene’s 1924  film, The Hands of Orlac is the first of several film adaptations of Maurice Renard’s story of a concert pianist who hands are amputated and replaced with the hands of a murderer.  Of the remakes, the most notable is unquestionably Karl Freund’s 1935 Mad Lovewith an all star 30′s cast of Peter Lorre, Colin Clive, Francis Drake, and Ted Healy.  Freund’s cinematographer, Gregg Toland, also filmed Citizen Kane (1940) and critic Pauline Kael famously noted the considerable visual influence Freund’s film had on Welles.  Peter Lorre also starred yet another version of the story, The Beast with Five Fingers (1946) which allegedly was (anonymously) written by Luis Buñuel (doubtful) and Curt … END_OF_DOCUMENT_TOKEN_TO_BE_REPLACED

He Who Gets Slapped (1924) is part of the 2011 Warner Archive Lon Chaney collection, and in this film Chaney gives one of his most natural, assured performances—in no small part due to director Victor Sjostrom,  who also directed Chaney, with Norma Shearer, in the following year’s Tower Of  Lies (unfortunately, yet another lost film).  Victor Sjostrom is something of an icon.  He was a favorite director of stars Greta Garbo and Lillian Gish, and his masterpiece,The Phantom Carriage (1921), was a considerable influence on Ingmar Bergman.  After the coming of sound Sjostrom retired from directing to return to his first love of acting, but he still served as mentor … END_OF_DOCUMENT_TOKEN_TO_BE_REPLACED

The Monster (1925) is part of  the extensive Warner Archive Collection 2011 releases.  This film, directed by Roland V. West and starring Lon Chaney, goes a considerable length to prove the adage that “there is nothing new under the sun.”  Essentially, The Monster is the precursor for the tongue-in-cheek old-dark-house-with-malevolent-horror-star-as-host movie.  Considerably later,Vincent Price and William Castle visited The Monster‘s familiar territory in the House on Haunted Hill (1959), a film that has become the stereotypical example of the genre. Director Roland V. West revisited The Monster territory again in the following year’s hit, The Batand, yet again with sound in The Bat Whispers (1930) (for which he is most remembered—well, he may … END_OF_DOCUMENT_TOKEN_TO_BE_REPLACED

The Criterion Collection’s remastered The Gold Rush (1925) is undoubtedly the Charlie Chaplin release of 2012. For years, the prevailing critical consensus was that Gold Rush was Chaplin’s feature film masterpiece. However, a newer generation of critics have since argued that honor should go instead to City Lights (1931). The Gold Rush receives criticism for its episodic structure; however, all of Chaplin’s features, including City Lights, are episodic to a degree. This is not necessarily a bad thing, making that a moot critique. The Criterion Collection release features the 1925 original, along with the 1942 re-edit that omitted the intertitles in favor of narration (by Chaplin) and economically trimmed down of some … END_OF_DOCUMENT_TOKEN_TO_BE_REPLACED

Tod Browning‘s frequent collaborator Waldemar Young wrote the screenplay for The
Mystic from Browning’s story, and it is clearly part their family of work
together which includes The Unholy Three (1925), The Blackbird1926), The
Show 1927), The Unknown (1927), London After Midnight 1927), West
of Zanzibar (1928), and Where East is East  (1929). The early knife-throwing act
seen here could be a blueprint for the same act in The Unknown. The
Mystic (1925) opens in a Hungarian gypsy carnival. The main attraction of
the carnival is “The Mystic,” Zara (Aileen Pringle). Zara is part of a trio,
which includes Poppa Zazarack (Mitchell Lewis) and Zara’s lover Anton (Robert
Ober). Of course, Zara’s clairvoyant act is all illusion and Browning, as
usual, lets his audience in on the trickery almost from the outset.

Conman Michale Nash (Conway Tearle) approaches the trio with a proposal to
take their act to America, where they can bilk naive, rich Manhattanites out of
their fortunes. The New Yorkers make Zara’s seances a hit, although not all of
the natives are so gullible, and the police are secretly investigating the
scam. To complicate matters, Nash puts the moves on Zara, and Anton is pushed
aside. Love does funny things, and soon Nash develops a conscience. He becomes
reluctant to swindle a young heiress. The ever-jealous Zara believes Nash must
want her for himself; but Nash simply wants to reform and make a better, honest
life for Zara. Their relationship is reminiscent of the one between Priscilla
Dean and Wheeler Oakman in Browning’s Outside The Law 1920), as are
the familiar Browning themes of reformation and unpunished crimes.

END_OF_DOCUMENT_TOKEN_TO_BE_REPLACED

In 2011 Warner Brothers has finally released a series of Lon Chaney films on DVD. Of these, the 1925 Unholy Three, directed by Tod Browning, is of considerable interest. The Tod Browning/Lon Chaney collaborations, The Unknown (1927) and the photo still reconstruction of the legendary, lost London After Midnight (1927) were released  a few years ago on a box set highlighting the actor. Before that, Kino previously released the first two films Browning made with Chaney, The Wicked Darling (1919) and Outside the Law (1920). Their The Big City (1928)  also seems to be forever lost, which leaves four neglected films; Where East is East (1929), West of Zanzibar (1928), The Road to Mandalay (1926 in truncated and badly deteriorated form), and The BlackBird (1926).  Hopefully, the release of The Unholy Three is a sign that the studio will release the remaining films of  the strangest collaboration between director and actor in cinema history. 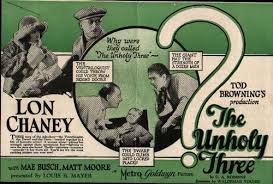 Among the new Lon Chaney DVD releases is the 1930 sound remake of The Unholy Three with Jack Conway directing Chaney and a mostly different cast. The only interest with the latter film is the novelty of hearing Chaney’s voice.  As in the silent film, the actor took on various disguises, this time allowing 1930 audiences to potentially envision the famed “Man of a Thousand Faces” as, additionally,  the “Man of a Thousand Voices.”  It was not to be. Chaney died shortly after filming and the resulting one and only film to feature the actor’s voice does not bear that potential out.   Chaney, dying of throat cancer, is horse throughout the film. To make matters worse, actor Harry Earles was far more magnetic and compelling in the silent film art form.His thick, German accented voice in the sound remake is an epic distraction.