Bowery at Midnight (1942), directed by Wallace Fox, is a surprisingly dour crime melodrama, with a dash of horror (no doubt mandated by Lugosi‘s casting). It borrows heavily from another Lugosi vehicle, Dark Eyes of London (1939), although the earlier movie was from an Edgar Wallace story. Bowery At Midnight is comparatively muddled. As in Dark Eyes, Lugosi again sort of plays dual roles, and does some actual acting. The explanation of why his professor character needs a second identity (he uses a soup kitchen as a front to recruit gang members) is nonsensical, however, as is his need to keep zombies in the basement (?!?) Despite its muddled narrative, this, along with Black Dragons, may be the strangest of the Monogram Nine. It has pacing issues, but Lugosi’s performance and the ending, which is still jolting even today, almost make up for the film’s numerous flaws. It has quite a cult reputation, which is perhaps why fans have a trio of options to purchase superior editions from Roan, Troma, or the Retromedia Blu-Ray edition.

Those who think Bela Lugosi reached the nadir of dignity working with Ed Wood Jr. may want to check him out with glued-on whiskers, hunched over, grunting like a monkey, and scratching his arm pit in 1943’s The Ape Man. It’s directed by William “One Shot” Beaudine who got his name because—you guessed it—he almost never did a second take. The plot rips off an earlier Monogram property, 1940’s The Ape (with Boris Karloff). That one at least had a decent central performance, despite its ludicrous plot. Ape Man, however, may be Lugosi’s most humiliating hour, with the actor looking more like an Amish preacher than an ape man, whining about his condition as he scrunches in a corner, needing spinal fluid. It’s poorly lit and, despite its obvious intent to be a parody, its dreadfully dull. It’s so bad that the white-bread heroes (Wallace Ford and Louise Curry) are actually a relief from the tedium. If they, and the film’s strained humor, are enough to interest you, it’s in the public domain, so there’s YouTube or some inexpensive DVD editions (none of which are remastered).

https://ws-na.amazon-adsystem.com/widgets/q?ServiceVersion=20070822&OneJS=1&Operation=GetAdHtml&MarketPlace=US&source=ss&ref=as_ss_li_til&ad_type=product_link&tracking_id=366weirmovi-20&language=en_US&marketplace=amazon&region=US&placement=B00004WG7M&asins=B00004WG7M&linkId=1e3fa9fafbfb0ae9c7039f6cf860bf64&show_border=false&link_opens_in_new_window=trueGhosts on the Loose (1943, directed by Beaudine) is Lugosi’s second—and thankfully final—team-up with the Bowery Boys. As in The Ape Man, the film is poorly lit. Beaudine seems to have stuck the camera in the middle of room, yelled “action,” and left for lunch. The (very) minimal charm and energy of Spooks Run Wild is completely absent here, and Lugosi has nothing to do. He was lucky. Ava Gardner (of all people) embarrasses herself far more in this utterly dismal excrement. This is easily the worst of the lot, something even the most forgiving defenders of the Monogram Nine unanimously agree on. The Roan Group did what they could with the DVD. 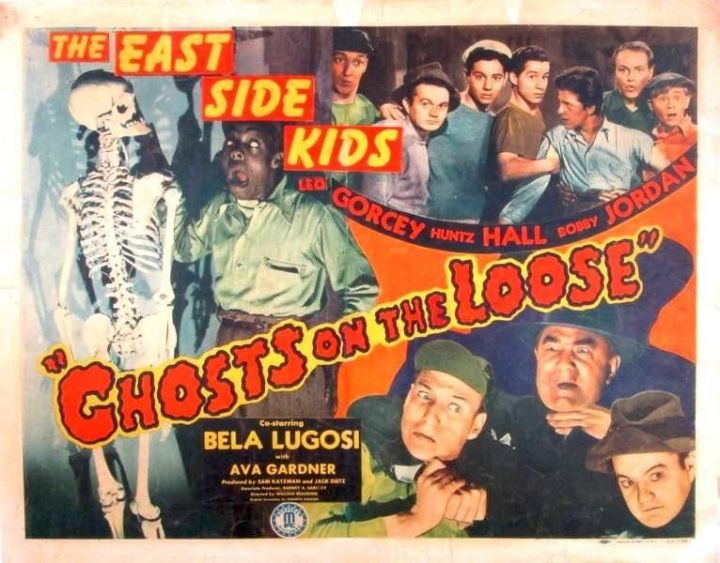 https://ws-na.amazon-adsystem.com/widgets/q?ServiceVersion=20070822&OneJS=1&Operation=GetAdHtml&MarketPlace=US&source=ss&ref=as_ss_li_til&ad_type=product_link&tracking_id=366weirmovi-20&language=en_US&marketplace=amazon&region=US&placement=B016BSRZES&asins=B016BSRZES&linkId=389aa71f1758abefdccd93379500af72&show_border=false&link_opens_in_new_window=trueBy contrast, Voodoo Man (1944, again directed by Beaudine) is a hoot, with a trio of horror stars in Lugosi, George Zucco, and John Carradine. Girls are disappearing from Zucco’s gas station. Yes, you read that right. Carradine is the imbecile abductor working for Dr. Lugosi, whose wife has been a zombie for 22 years. His scientific skills having failed him, Lugosi becomes a Voodoo Man, abducting pretty girls in an effort to transfer their souls into his wife. Darn it, none of the girls have worked so far. Yes, its a ludicrous reworking of The Corpse Vanishes, only this time we have a horror writer (Todd Andrews) whose bride-to-be gets abducted. A clearly stoned Carradine beats a drum, Lugosi and Zucco sport wacky robes, and Andrews wonders if the shenanigans would make a good movie starring Bela Lugosi. Its tongue firmly in cheek, Voodoo Man sizzles in its ridiculousness. Lugosi is good here, leading a colorful cast who seem to be enjoying themselves. It’s contagious. We should be grateful to Olive Films for not subscribing to the film’s reputation as bad cinema, because they remaster it like it’s a neglected Orson Welles masterpiece. This is my personal favorite of the Nine.

https://ws-na.amazon-adsystem.com/widgets/q?ServiceVersion=20070822&OneJS=1&Operation=GetAdHtml&MarketPlace=US&source=ac&ref=tf_til&ad_type=product_link&tracking_id=366weirmovi-20&marketplace=amazon&region=US&placement=B075TQRV8Z&asins=B075TQRV8Z&linkId=7d8aed7e9440ac7b85069bd52a794a3d&show_border=false&link_opens_in_new_window=true&price_color=333333&title_color=0066c0&bg_color=ffffffReturn of the Ape Man (1944, directed by Phil Rosen) is not a sequel to The Ape Man. According to the credits, it also stars Lugosi, Zucco, and Carradine, but Zucco became ill and was replaced by Frank Moran. Lugosi and Carradine thaw out a Neanderthal  man and want to give him a brain transplant. Lugosi intends to use a wino, but things do not go right, and Carradine is toast. The result is a murdering caveman who plays the piano. Oh, and he hates blow torches, too. Lugosi echoes the film in being goofy and entertaining as hell. Some, probably people who used to pull the wings off butterflies, cite this as the worst of the Nine. Ignore them. Olive films did. My advice: buy the Blu-Ray of this and Voodoo Man and throw one hell of a bad movie party.