The Mysterious Mr. Wong (1934) was one of the first of those Z-Grade chillers. It was made for Monogram studios, directed by William Nigh, and produced by George Yohalem. It has a wretched reputation as embarrassingly racist, cheap pulp, with Lugosi as a Chinese villain with a Hungarian accent. Clocking in at barely an hour, it still manages to be poorly paced, with long stretches of dullness. It’s halfway over before Lugosi even dons the menacing Fu Manchu attitude and silk robe, torturing the hell out of the white heroes, including the obnoxious wisecracking Wallace Ford. Although we desperately hope that Lugosi will get to slaughter Ford, it’s the 1930s, and we’re going to be disappointed. Still, Lugosi delivers in a hammily animated performance and Lotus Long, in a criminally small role, almost steals every scene she’s in. It’s been remastered for DVD by the esteemed Roan Group and released on Blu-ray by Retromedia. The Mysterious Mr. Wong reportedly made a good profit for the studio; enough for Monogram producer Sam Katzman to remember, and offer a nine-picture deal to a down-on-his luck Lugosi in 1941.

“The Monogram Nine,” as the series has come to be known, is the stuff of infamy. They are perhaps “topped” only by Lugosi’s later work with Ed Wood, Jr.—although we could argue that the Monogram opuses are still better than Lugosi’s entire1950s output. Alas, as dreadful as they all are, none of the Nine approach the zany nadir of the Wood trilogy. Even bad movie lovers, coming to these movies for the first time, may be disappointed after sampling such delightful morsels as Glen or Glenda(1953). With one very slight exception, the direction in all of the Monogram Nine could be said to be on autopilot, with Lugosi merely being told to be Lugosi. But, nobody does Bela Lugosi better than Bela Lugosi. While he doesn’t rank among the world’s great actors, Lugosi had charisma aplenty, and that he delivers in spades, never condescending to the material (a crime of which Karloff could sometimes be guilty). That must count for something, because quite a few of these lesser Lugosis have been remastered and released on Blu-Ray.

http://ws-na.amazon-adsystem.com/widgets/q?ServiceVersion=20070822&OneJS=1&Operation=GetAdHtml&MarketPlace=US&source=ss&ref=as_ss_li_til&ad_type=product_link&tracking_id=366weirmovi-20&language=en_US&marketplace=amazon&region=US&placement=B01MS740XT&asins=B01MS740XT&linkId=2316bbc695e3b412e1c31dce016c947b&show_border=false&link_opens_in_new_window=trueThe one well-directed exception is the first of the Monogram Nine: The Invisible Ghost (1941), directed byJoseph H. Lewis. Lewis has a cult following similar to that of Edgar G. Ulmer; he was stuck primarily with cheapie projects, and yet managed to instill  considerable craft into them. Lewis is best know for My Name is Julia Ross (1945), the noir Gun Crazy (1950), his cinematic swan song, Terror in a Texas Town (1958), and a pair of above average Randolph Scott westerns. The Invisible Ghost features Lewis’ typical stylish direction: expressive lighting, tracking shots, unorthodox camera angles, etc. This easily makes it the best directed of the Monogram Nine, and it looks fabulous in Kino’s HD Blu-ray transfer. The script, however, is utterly pedestrian. There is no invisible ghost. Instead, there’s the believed-to-be-dead adulterous wife of Lugosi’s Dr. Kessler. Mrs. Kessler is in fact quite alive, appearing occasionally at the window to send Lugosi into a trance-like homicidal frenzy. Lewis milks extreme closeups of the murderous Lugosi to craft an aptly sinister milieu. Lugosi is in full Lugosi mode, but even he’s practically upstaged by the startling non-stereotypical, intelligent performance of African American actor Clarence Muse as the butler. If you can get past the astounding absurdity of its plot (and the annoying meddlesome heroes), the beauty of the Kino edition makes for a divertingly hokey hour.

Spooks Run Wild (1941, directed by Phil Rosen) features the East Side Kids vs. Lugosi as the “Monster Killer.” Only, he’s not. He’s just a stage magician and a red herring. The East Side Kids were also known as the Dead End Kids and the Bowery Bows. They were led primarily by Leo Gorcey and Huntz Hall and were popular for about a decade. It’s hard to see why. Their schtick is embarrassingly obvious and frequently racist, with resident African American Sammy Morris as the butt of their jokes (i.e. he gets bug-eyed and spooked over his own shadow). Spooks Run Wild is a tiresome play on the old dark house genre with thunderstorms, skeletons in the closet, spooky candles, and tripping-over-shoelaces double takes. Lugosi, not having much to do, is a caricature here, and sleepwalks right through it. Worse, it’s dreadfully dull. The best thing that can be said about it is that it’s better than the follow-up (to be covered in part 2).

http://ws-na.amazon-adsystem.com/widgets/q?ServiceVersion=20070822&OneJS=1&Operation=GetAdHtml&MarketPlace=US&source=ss&ref=as_ss_li_til&ad_type=product_link&tracking_id=366weirmovi-20&language=en_US&marketplace=amazon&region=US&placement=B0002T7YXA&asins=B0002T7YXA&linkId=7117ed644ecb26bde4ce739ea3ac7b06&show_border=false&link_opens_in_new_window=trueBlack Dragons (1942, directed by William Nigh) is Monogram’s contribution to the war effort ,and of course they do it in their typically cheap style. Lugosi is again in dual roles and gives a good, animated performance as a Nazi hypnotist killing off the Japanese spies who betrayed him. Nigh takes note, giving the horror icon plenty of sinister eye closeups. The story is paper-thin and it takes too long to get moving, but once it does, it moves at a good clip. Its cheapness is evident, using stock footage, which weirdly includes Rudolph Valentino‘s funeral. We almost forgive its too-many-flaws-to-count, as this is an utterly bizarre entry which goes for the jugular with a shock finale. As wartime propaganda, its heart is in the right (if idiosyncratic) place. Future Lone Ranger Clayton Moore has a small part. Go for the Roan Group release. 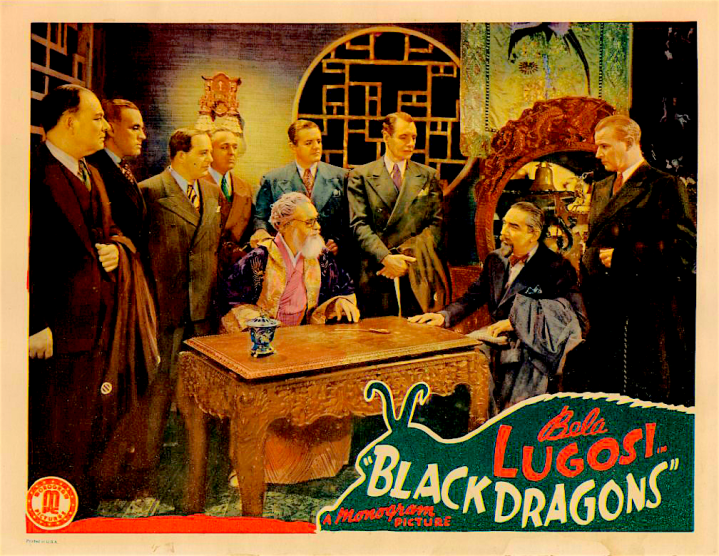 http://ws-na.amazon-adsystem.com/widgets/q?ServiceVersion=20070822&OneJS=1&Operation=GetAdHtml&MarketPlace=US&source=ss&ref=as_ss_li_til&ad_type=product_link&tracking_id=366weirmovi-20&language=en_US&marketplace=amazon&region=US&placement=B06XVYVH2X&asins=B06XVYVH2X&linkId=bd733c3bb824b310ddd7c1ec20c66250&show_border=false&link_opens_in_new_window=trueThe Corpse Vanishes (1942, directed by Wallace Fox) was featured on Mystery Science Theater 3000, which should be an indication that it’s dreadful and preposterous enough to actually be fun. Brides are dying at the altar after smelling an orchid. Could that be a clue? All their corpses were stolen by sinister types in a hearse. Could that be another clue? Not to fear, the resident Lois Lane-styled journalist (Luana Walters) is on the case, and she thinks that that leering mortuary guy’s got something to do with it. Lugosi’s got a sick bitchy wife at home—a countess (Elizabeth Russell, from Cat People)—and she needs virgin brides to make her feel better (hey, it’s 1942). Husband and wife both sleep in coffins, which is thankfully never explained, and have a trio of loyal, but inept henchmen: an old lady and her two sons (a dwarf and a hulking idiot). A thankless Lugosi beats on the boys, and he’s gonna get it back good. Lugosi again plays his stock mad doctor character and there’s nothing special about his performance. Although it’s shoddy, cheap cinematic junk food, it zips along outlandishly enough to make it the most enjoyably lighthearted of the Monogram Nine. It would make a great double feature with Lugosi’s Devil Bat (1940, made for PRC). As with the Mysterious Mr Wong, The Corpse Vanishes has been released by both Roan (DVD) and Retromedia (Blu-ray).