Part one is here:

There are parallel potential hostile takeovers, but the second is akin to a sketch of something that will be colored in later.

The first and more prominent attempt at a coup involves a walking personification of white male privilege attempting to oust Cat from her own company.

Winn, Olsen, Kara, and Lucy Lane join forces to protect Cat from her potential usurper and there’s a bit of cold-war type of counterinsurgency that’s bubblegum fun. Olsen has a shining 007-like moment when sabotaging by Mr. White Male Privilege. Almost caught, our intrepid CATCO photo journalist slithers his way out of that scenario with all the charm of a GQ Sneaky Snake.

Meanwhile, Aunt Astra (Laura Benanti) and hubby Non (Chris Vance) attempt to hack Earth and there’s some gladiatorial combat in the sky afoot, but as DEO Green Beret Alex (take that John Wayne) observes; Kara’s not up to par. The emerald training session, where Alex proves to be an artisan in combative encounters, renders the Kryptonian tug-of-war as comparatively tame. Of course, the key ingredient is Chyler Leigh as Alex.

However, this episode ultimately belongs to Benoist and Flockhart in their respective roles, which enjoy edifying development here. Family secrets from both ladies are revealed and those revelations inspire them towards shared intimacy that’s heroic. This climaxes in the big reveal, which takes place after the threatening crisis has been subverted. Benoist excels with such hushed vulnerability that the scene is her best since “Human for a day.”

For exposing the morally bankrupt Trump Toon mindset of winning and the hypocrisy of white male privilege, “Hostile Takeover” earns … 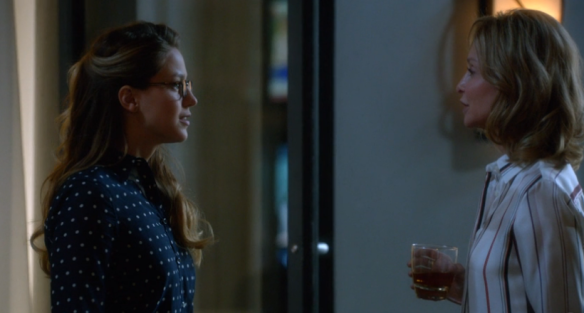 “Blood Bonds” picks up where “Hostile Takeover” left off; in a rousing battle between Kara and Non. However, this outing becomes narratively cluttered and although enjoyable, the direction is off-kilter in kinetic pacing to accommodate multifarious bullet points.

There’s an additional misstep in the writing when it segues into handicapping Astra with sentimentality. Bennati is too commanding a presence in the role(s) to be potentially diminished. Likewise, Maxwell Lord is proving to be an underwhelming adversary when he holds back after capturing Olsen in a bit of photo espionage.

Olsen and Winn are two characters who thus far are lacking the level of complex development on a par with Kara, Cat, Alex, and Henshaw. Here, the interplay between Olsen and Winn refreshingly moves past Supergirl pals, but it’s still filler.

There’s also disappointment in the back-peddling of Cat’s discovery from the previous episode. The secret identity troupe can wear thin and it’s hardly conceivable that the smartest person at CATCO is so quickly convinced that she erred while Olsen and Winn are in the know. That aside, Cat’s relating to Kara and the big discovery is whimsically prismatic and there’s fun to be had in seeing Cat humbled. Henshaw’s aiding the ruse works wonderfully even if we’re not convinced it was necessary. Taking a cue from the “Adventures of Superman,” it’s a kick to see Supergirl and Kara side-by-side.

As with the source material, J’onn J’onzz aka Martian Manhunter is proving to be the enigmatic green “illegal” with a heart of fiery gold. Harewood is drawing out the character in a gradually compelling way and although his divulging to Kara comes sooner than expected, it’s also welcome.

The strength of this episode is the fleshing out of Kara’s authentic need for life at CATCO. Benoist adds considerably to the outsider quality of her character, especially when things go south. Per the norm, Benoist nails it; continuing to add versatility and meaty dimension to a pulp hero.

For guts in tackling status quo biases across the board, “Blood Bonds” earns one exploding Trump Toon head. 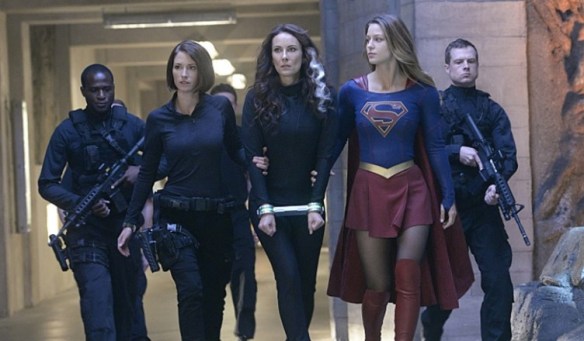 “Childish Things” is a strong example of why this series appeals to millennials and that’s a  good thing. Like Rod Serling, the writers of “Supergirl” use genre symbology to drive home points of social justice (which, of course is the POLITICAL red flag for Trump Toons craving timid battles and car chases). The optimistic Danvers sisters try to assure J’onn J’onzz that bigotry has gone the way of the dinosaur. He knows better and will be proven right soon. Yes, the big green “illegal” martian symbolizes our xenophobia. How dare they? Enough of this PC shit and let’s MAGA by returning to an era that most Trump Toons dIdn’t live through. That might be said and good, except the McCarthy years were only good for upperclass conservative male WASPS while”The Twilight Zone,” “The Adventures of Superman,” High Noon, and many other cinematic dramas were indeed critical and tackling the status quo sixty years ago. So too, does “Supergirl” which will make this series relevant long after it’s initial run. That’s why it’s cult following is escalating slowly but surely past the likes of “Arrow” and “Flash.”

Henshaw gets talked into a bit of derring-do in spying on Maxwell Lord. Better yet, In Manhunter person, he joins Kara for an up, up and away sprint through the clouds. Alex channels her inner Mata Hari when slipping into her little black ninja dress (who needs Lois Lane?), but the day’s annoyances are nothing pizza and Game of Thrones won’t cure in a charming vignette. There’s also a bit of the Olsen/Lucy Lane continuum, for those who are interested.

Primarily, this is an overdue episode on Winn and, oh, Charlie Brown has scars.The writers have finally tapped Winn’s quirky potential and begin with his (less interesting) daddy; Winslow Schott (Henry Czerny) escaping from prison to take revenge on the entrepreneur who stole his toy designs.

Enter Toyman, who was once reportedly a nice guy but wound up a mass murderer. Winn, finally moving beyond merely being a Kara crush, fears that he might wind up like the daddy he hates.

While that narrative element may not win any awards for originality, the themes of unrequited love, emotional intelligence and self-reflection are well-handled. While the villain doesn’t have any power per se, he does however have a killer yo-yo.  If the series stays true to its source material, junior is going to be a chip off the old block and Winn may very well prove to be the crowning glory of Supergirl villains.

Strange Visitor From Another Planet

With Winn now banished to the friend zone and the Olsen/Lane duo off doing their thing, Kara gets a potential romance with Cat’s son; Adam (Blake Jenner, who was briefly married to Benoist). Frankly, it’s too soon and not very compelling. The Barry and Iris saga on “The Flash” is the television superhero romance yardstick that “Supergirl” has yet to measure up to (although it’s Alex’ relationship in Season 2 that will nail it). However, we do get to see an extra dimension to Cat as paternal.

Still, it’s the strange visitor we’re here to see and his name is J’onn J’onzz. As the last episode focused on Winn, here the focus is primarily Henshaw and he’s developing into a character of interest on par with Kara and Alex.

Now, here we’ll award series-hating Trump Toons their own little special wall … because the plot of a political drawing up an anti-alien bill is…. well pretty familiar right now with brown shirt shouts of build that wall (although this episode actually aired 5 months before Oompa Loompa was elected by his Godless Oily Pussy-grabber base and 10 months before the Murican electoral college handed him keys to the gold-plated, red velvet kingdom).

As far as sci-fi action goes, this episode knocks it out the ballpark like an Igor Stravinsky drum. The animated flashback of Martian mayhem and White Martians VS Green Martians is startling Television. Harewood clearly relishes his role and Benoist is smart enough to share the spotlight because while Supergirl may not have an ongoing antagonist fully worthy of her yet, with J’onn J’onzz she now has an alien peer whose development is both welcome and full of surprises. 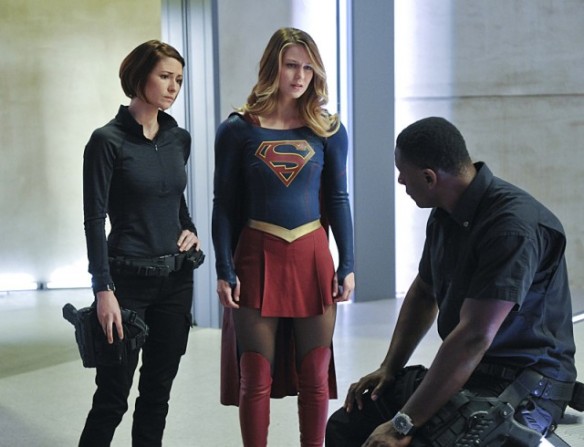 Bizarro is one of Superman’s better villains. Here, she (Hope Lauren) is adapted into a Supergirl doppelgänger as created by Maxwell Lord. Unfortunately, the reason for Lord’s hatred of Supergirl is something of a blown gasket. However, Alex revels in a hard-driven scene opposite Max, body-slamming him into a desk before the DEO takes him into custody.

In the midst of all this, Kara drops Adam to keep him safe, but it’s doubtful that anyone apart from his on-screen mother will miss him.

That leaves us with Bizarro herself. She begins as an effect ( i.e. shooting fire in opposition to Kara’s breath thingy), but being of Supergirl, Bizarro mantles Kara’s desire and goes after Olsen. DNA proving to be a tricky thing, the doppelgänger can’t muster up enough detachment or anger to obliterate him.

Bizarro seeks forgiveness as she’s placed in a coma with a sympathetic Kara by her side and Benoist, as expected, owns the scene. She is that damned good. There’s a parallel here that deserves attention because while Lauren is easily the best Bizarro to date, Benoist is, this quick into her first season, giving serious competition to predecessors as the most accomplished portrayal of a Kryptonian survivor.

There’s not much in this episode to offend even the most putrefied Trump Toon. Still, it deserves one Trump-a-spazzing at the very lest for Alex kicking privileged white male ass. 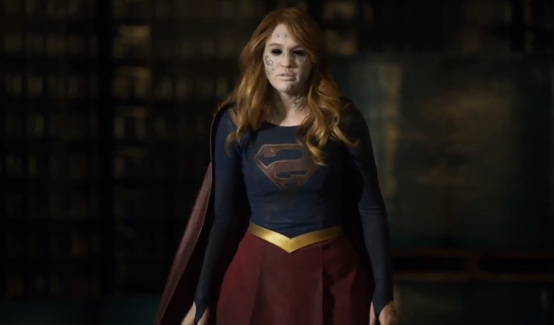 For The Girl Who Has Everything

“For the Girl who has everything” opens with a horror film-like premise of a monster dropping from the ceiling to attack Kara. It’s a Black Mercy (a tentacled parasite thingy akin to something out of John Carpenter’s The Thing), sent by Non, that attaches to its victim and sends them to a mental wonderland. Non’s motive is to incapacitate Kara, paving way for the Myriad Project (AKA Invasion), although what that entails is still vague.

Kara wakes up on Krypton and the longer she’s there, the more life on earth fades from memory. The plot is loosely based off an Alan Moore-penned Superman comic. Unlike lone wolfs Batman and Superman, Supergirl depends on her extended community. It’s blood family who has put her in this predicament and it takes super girl Alex to save the day with the help of Maxwell Lord (temporarily released from his DEO holding cell) and Astra. Lending a helping hand, Henshaw again has to put on Kara drag to maintain the semblance of CATCO normalcy. As expected, Cat proves to be a more formidable irritation than a world of white martians.

Again, the writing serves up scrambled plot threads, but Benoist navigates through all that  and makes it her showcase. Once free of alternate reality, Supergirl sets out to kick Kryptonian thug ass. With Henshaw and Alex joining the fight, the episode ends with a jaw-dropping shocker that includes the death of a major character and a Martian mantling a kind of martyrdom. 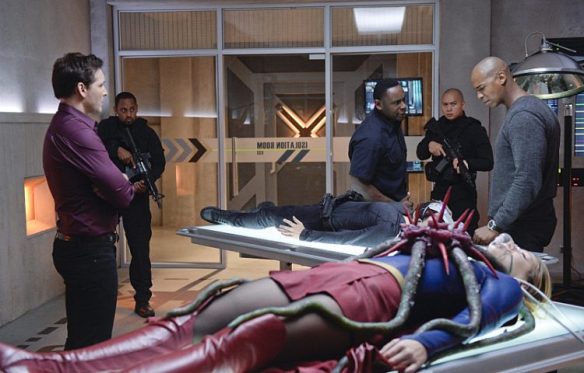