Like Ed Wood, Jr. before him, Ron Ormond had a brief, inspired period of lunacy, best seen in his two Christian scare masterstrokes: If Footman Tire You, What Will Horses Do? (1971) and The Burning Hell (1974). After these, he lost his demented mojo. While 1976’s The Grim Reaper has much to recommend it (within a certain mindset), an element of fatigue has set in. The first and most obvious sign is the absence of Rev. Estus Pirkle (he and Ormond had a falling out over money—imagine that!), and as unfathomable as it may be, that stoic nutcase is immediately missed. The second major flaw is Ormond’s futile attempt at a linear narrative, proving he didn’t quite grasp the fact that the appeal of his previous two films was as crowning examples of evangelical naive surrealism.

One thing that The Grim Reaper does accomplish is fleshing out, on celluloid at least, the Baptist maxim “you’re goin’ to hay-ull.” One can always tell a Baptist because that’s their favorite catchphrase, and they haven’t grown tired of it yet.

Worse, Eddie races cars! Now, the film doesn’t go into the semantics of “what if a race car driver is saved?” My Pentecostal aunt found herself in that same undesired predicament with one of her brood, but since Pentecostals don’t believe in “once saved, always saved,” I guess her boy wasn’t saved, even if he claimed to be. While the appeal of watching cars driving around a circle is a tad perplexing and the idea of racing is foolhardy, one might be hard pressed to locate the sin in it. 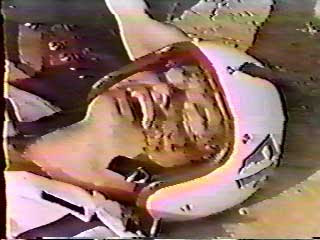 Still, Eddie isn’t saved. Tim attempts a literal last second death conversion by pleading with Eddie to recite the sinner’s prayer before succumbing to injuries from a wreck. Stupidly, Eddie doesn’t accept Jesus as his lord and personal savior. Now, Eddie’s gonna fry, but good. Such half-baked theology lacks a bit of spiritual common sense. The Ormond hypothesis follows Baptist reasoning (?!) pretty closely. According to them, if a serial killer gets saved before he dies, he goes to heaven (an example is Jeffrey Dahmer, who some actually claimed was saved in this manner). However, if his victims didn’t get the chance to say the sinner’s prayer and died immediately (as we assume some did), then they have go to Hell. Shit outta luck, dude—it’s a “the rules are the rules” kinda thing, as the Baptist preacher tells Eddie’s mum and dad. Sorry, folks, I can’t say he’s in heaven at the funeral because he’s burning in Hell now (as if dying in a fiery death wasn’t punishment enough). Yes, these are adults who actually believe this. 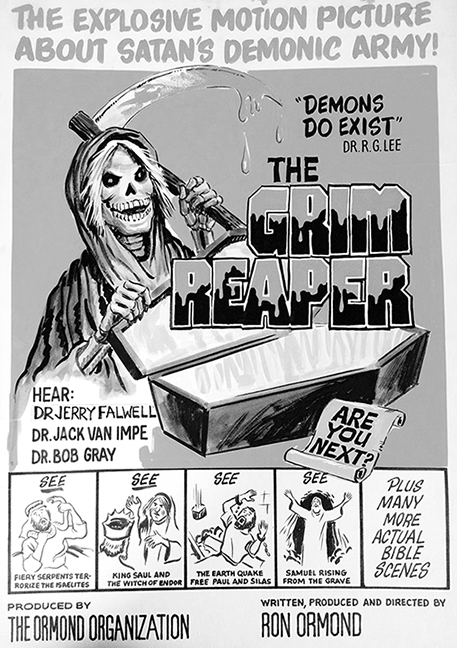 Vern, none too happy because the preacher said his boy is in Hell, goes to a spiritualist. Tim warns daddy that spiritualism is of the occult, nothing more than demon worship. After being grilled by Tim, the spiritualist confirms this by admitting he doesn’t believe the Bible is the inspired word of God Almighty! Adding to all this high-faultin’ drama is a spectral visit from Eddie in Hell. Mama is traumatized. What are mom and dad to do now? Go to a series of preachers, of course. One of the clerics says “Gawd” a lot and catapults the viewer into a cardboard biblical flashback, with white bread Baptists playing Jews Paul and Silas. A young Jerry Falwell, somewhere between his second and third chin phase, makes a cameo; he’s a dullard, as usual. Flashback #2 involves more white Jews and the Witch of Endor (played by Ormond’s wife, June). Her melting-face mask is a tad ill-fitting, as are the boys’ beards. With this low of a budget, glue must have been a rare commodity. The third biblical flashback is a weird one about Moses (or Baptist Santa—take your pick) and a killer snake that dispatches rebellious Jews off one-by-one. They get bit, they scream, they die horribly.  It’s shot from bizarre angles and seems to be veering from the narrative (there’s a vague attempt to connect it to a point in a sermon). Even better is a vision of Vern burning in hell (bring on the orange syrup), befriended (sort of) by a demon in pancake makeup with a weird thingamajig on his head who introduces various occupants of Hades, including a Bela Lugosi-as-Dracula lookalike, a pillar of salt (Lot’s wife), and Judas, who drops silver coins for all eternity only to have them bounce back into his hand. Wow, is right. Apparently, Ormond achieved the Hellish effects by burning a pile of rubber tires. Regardless, the ill-fitting vignettes are far more entertaining than the yawn-inducing narrative. Does dad get saved? If that’s important to you, you can probably find it on YouTube, along with the final released Pirkle/Ormond collaboration: The Believer’s Heaven (1977). 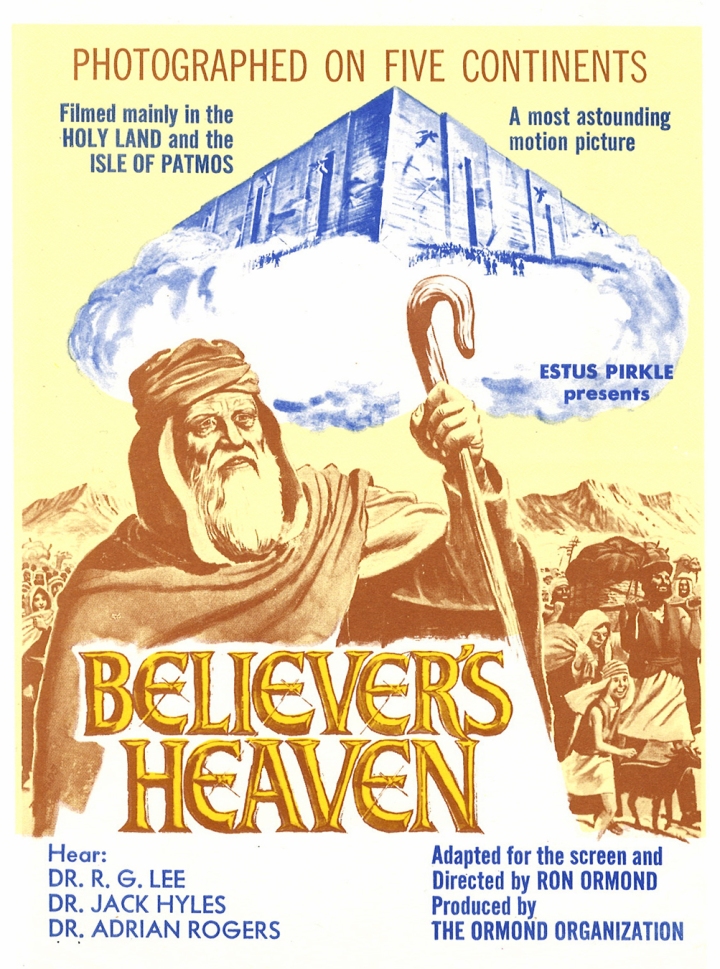 The Believer’s Heaven is a short-short, but with Pirkle back, Ormond crams a lot into its meager three minute run time (Dr. Robert G. Lee even makes it back, for about two seconds). It’s not so much a scare film as propaganda, but Pirkle’s pretty animated when he talks about New York City, which he mentions a lot, with clear contempt. On the bright side, he informs us that God’s New Jerusalem is gonna be bigger than man’s Big Apple. “Does this excite you?” Not as much as seeing some old broad turned young again in heaven and after cheap visual and sound effects (that go “bleep”). She even gets a Jesus bump. God likes Baptist fashion, apparently. The big man himself makes a cameo, but he’s kind of frail, with most of his weight going into a really long white beard.

All the white people wearing fast food crowns in the sky look bored, despite the birds that won’t quit singing in palm trees. It proves David Byrne‘s proclamation that heaven is a place where nothing ever happens. Can’t have that, so we gotta get back down to Earth, where we meet the crippled dwarf Evelyn Talbert. Yes, a dwarf in a Baptist church! God is good indeed, despite the fact that little Evelyn has had a lot of pain in life. She can’t walk, but one day she will! And to prove it, little Evelyn breaks into the song, “One of These Days.”  As animated as she is, one expects her to leap from her wheelchair, but no miracles today—Evelyn stays put.

“Now, if Jesus came back today, where would you be? If you died in an earthquake, where would you go? This could be God’s last call to you!” Ah, that’s the scare part, which makes little sense after the last two and half minutes, but why quibble?

*A REPRINT FROM 366 WEIRD MOVIES
http://366weirdmovies.com/ron-ormonds-christian-scare-double-feature-the-grim-reaper-1976-and-the-believers-heaven-1977/