A few months back, a co-worker sent me a meme of Homer Simpson mimicking Donald Trump mimicking a handicapped reporter under the heading: “Look Marge… I’m a Christian.” If one associates Christianity with brain dead right-wing WASPs, then the only better symbol than a Homer parody would be walking caricature Kirk Cameron. In addition to his roll-on-the-floor Left Behind rapture series, Cameron, in 2014, prefiguring Trump and his Trumptards, took it upon himself to “Save Christmas” and ‘Murica from all those War-on-Christmas “Happy Holiday” and “Season’s Greetings” coffee cups (with no snowflakes, dammit).

Like all of Cameron’s movies, Saving Christmas was universally panned, which prompted the Christian entrepreneur (smelling a potential box office loss for his booming franchise) to panic. He called on “the real people” (as opposed to the sub-human critics) to give him a thumbs up: “Help me storm the gates of Rotten Tomatoes,” he wrote, “all of you who love Saving Christmas – go rate it at Rotten Tomatoes right now and send the message to all the critics that WE decide what movies we want our families to see.” Kirk’s endeavor promptly backfired. Even the “real people” ripped it to pieces, which of course Cameron blamed on liberal atheists, no doubt paid off by George Soros. Now, before we dismiss this as yet another easy target: lest we forget ‘Murica elected Cameron’s triple-chinned, mentally-challenged, pedophile-conspiracy kook, silver-spoon fed billionaire, and CINO (“Christian-in-Name-Only”) prophet to the highest office of the land in 2016.Saving Christmas is is a lump of stocking coal that ‘Murica has reaped.

The irony of Saving Christmas is that it’s the most dumbed-down, offensive, holiday killing, morally bankrupt Christmas movie ever produced, especially if one subscribes to the precepts taught by one Jesus of Nazareth. It actually embraces and endorses avarice and gluttony, and takes to task wimps who dare suggest that giving money to charity or the less fortunate is more Christ-like than spending money on oneself (apparently, the filmmakers never read the Lazarus and the Rich Man parable). Cameron’s movie, directed by co-star and fellow disgusting human being Darren Doane, does a Linus in reverse, proclaiming how good and Christian materialism actually is because, ya know, Jesus doesn’t really want peace on earth to men of good will, he wants us to to gorge on the day we celebrate his birthday. (Cameron’s head-scratching thesis insists that holiday materialism is good because God, taking over Christmas, became material). Having the chutzpah to proclaim that his masterpiece puts Christ back in Christmas, Cameron opens his opus with a jaw-droppingly garish Christmas party that is only missing Jan Crouch.

Saving Christmas quickly becomes a dull Fascistic screed, but at least Cameron is being true to the narcissistic, self-righteous indignation that has plagued his professed religion for the last 500 years (the Reformation began in 1517). Claiming that his interpretation of the celebration is the interpretation of the celebration, his targets are fellow evangelicals who don’t see eye-to-eye with him, as opposed to the non-Christmas celebrating Jews, atheists, and Muslims (oh, my!) Of course, Cameron doesn’t really want to obliterate the liberal PC war on his holiday, because that would put a serious dent into the heaps of money he makes fanning the flame of paranoia.

Having no plot, half of the movie takes place in a car with Cameron dryly spewing his apologetics of greed (the buttery slaughtered pig in the holiday spread can be both Herod’s infant victims and baby Jesus in a manger, Christmas tress represent the cross, and Hobby Lobby decorations recall Eden), which catapults us to laughably amateurish macabre, slow-mo “biblical flashbacks” (and an almost surreal reenactment of Saint Nicholas ass-whuppin’ an atheist) that remind one a bit of the film discussed below. 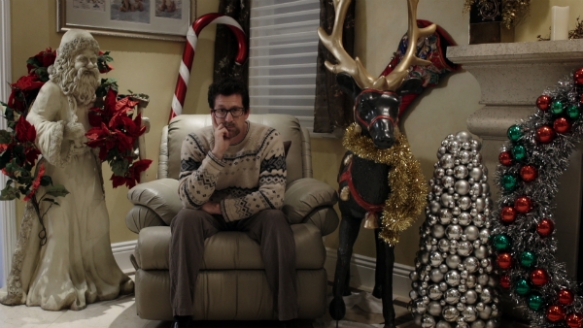 Apart from atrocious acting, the most laughable vignette is an attempt to be hip with a pseudo hip-hop number, which features Cameron doing the “worm” (don’t ask, but you may actually ask “where’s Carman when you need him?’)

It’s also one of the few laughs, because much of this unfathomably inept film consists of perfunctory hot chocolate lectures (from an empty cup), put over with all the self-satisfying smugness of youth pastors everywhere (and lotza filling, including bloopers and endless credits) to fill out its scant yet epic 80 minute run time.

Amidst all the sanctimonious sermonizing, Saving Christmas does have a couple of zingers: “Santa has the exact same letters as Satan.” “This is a complete hijacking! This is a hijacking! High-handed, hijacking handedness-jacking! It’s like a car-jacking of our religion,” Christian (Doane) assures Kirk (Cameron). It ends with a gluttonous finale with all the rich fat cats stuffing their faces as self-knighted prophet Cameron takes center stage, morbidly grinning from ear-to-ear, to announce: “It’s time to feast.”  This is a movie tailor-made for blatantly nonsensical hypocrites that require serious penance, and for that, we’ll cast Cameron and company into…

The Burning Hell (1974), a Christian scare movie forced upon us in our youth (in hopes to get us saved). I still recall the ugly vanilla wall they projected it onto in mother dear’s church. On some it worked, but—bragging rights here—although it scared the bejeezus  out of me ( I was ten), it didn’t scare me enough for the glory walk, which was far more threatening. Seeing it again years later proved to be quite a hoot. It was directed by Tennessee (where else?) Z-movie hack Ron Ormond, who quite possibly made the worst film of all time (despite serious competition from Ed Wood, Harold P. Warren, Phil Tucker,  Vic Savage, Coleman Francis, and Al Adamson) with the 1953 atrocity Mesa of Lost Women. Somewhere along the way (according to the PR), Ormond “got saved” after surviving a plane crash and transitioned from Lash La Rue whip-wielding westerns (1952’s The Black Lash) and exploitation titillation (1968’s Monster and the Stripper) to Christsploitation. Being the huckster he was, Ormond found his next target audience; evangelicals being the gullible lot they are, he made a small fortune. The Burning Hell is Ormond’s second film based on the kooky preachings of Rev. Estus W. Pirkle (you can’t make up a name like that). With Pirkle, Ormond found his quintessential collaborator. Their first endeavor was the mind-boggling apocalyptic commie scare masterpiece, If Footman Tire You, What Will Horses Do? (1971). They also made The Grim Reaper (1976) and The Believer’s Heaven (all coming soon to 366 Weird Moves!) 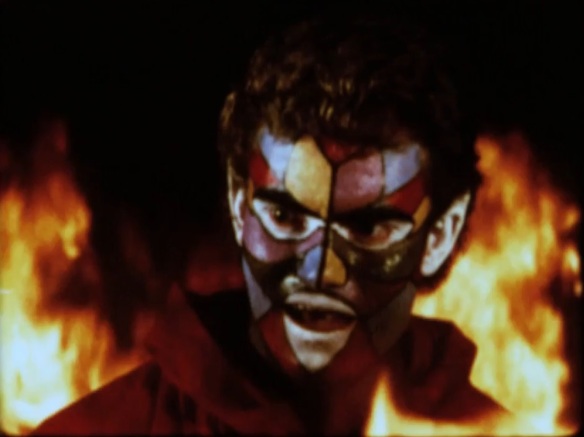 The Burning Hell opens with a jailbait girl chorus singing “Hell awaits you.” The film has the same inbred, backwoods congregation from Footman, and although this second Ormond/Pirkle opus with loooong dull stretches of Southern Baptist preacher Dr. (Doctor of what? Slurred speech?) Robert G. Lee (of course) sermonizing to the zombie flock doesn’t quite maintain the same level of inspiration, it was freaky enough to inspire plenty of resoundingly successful altar calls. Basically, Pirkle tells us (repeatedly) that Hell is real and it’s going to suck bad for unsaved trash. Ken and Tim (the latter played by Ormond’s son…Tim), being groovy hippie-types, don’t buy it, because they go to one of those libtard churches that preach that “God is love” shit. Of course, we know the God of  “truth, not tolerance” is gonna show em’, but good. Ken, while driving his motorcycle, is decapitated in a gruesome ketchup-on-the-pavement wreck. The poor dude wakes up in Hell and, whattayaknow, Pirkle is right—it sucks, bad. Tim to the altar, please.

Now, before we go to “Hay-ull” we are inundated with biblical reenactments of lily white hayseeds playing Middle Eastern types, adorned in pressed robes and department store Santa beards, hobnobbing in the desert. One of them is supposed to be Moses, but Chuck Heston doesn’t have to worry about the competition.

Now, “Hay-ull” is exactly what Rev. Pirkle told us it would be: there’s lotza pancake makeup demons (with plastic vampire teeth) and wonder bread types a-crying and a-screaming as they burn forever and ever and ever and ever (while covered in really thick orange syrup). Undoubtedly, the money shot of Hades is the worms—yes worms, folks, and shots of tormenting worms coming out of sinners mouths, noses, and ears. The sight of wiggling worms got mother dear’s preacher so worked up that, after the film was over, he went into a tirade about his favorite target- gays, screaming “there’ll be maggots for the faggots in hell.” With 20/20 hindsight, that’s kind of amusing, since said preacher turned out to be a Roy Moore type. The Burning Hell is a kind of live action Chick Tract/ Kabuki theater for Protestant fundamentalists. It made piles of cash, despite never playing in theaters (it’s only an hour). It was booked in every sawdust-on-the-floor backwoods wooden pew church throughout the South and Midwest for a decade. I don’t think it has ever been released on home video, but it’s quite possibly in the public domain now, and you can easily find it on YouTube. Bring the potato chips (BBQ, of course) for a perfect, moronic double feature with Kirk Cameron’s Saving Christmas. 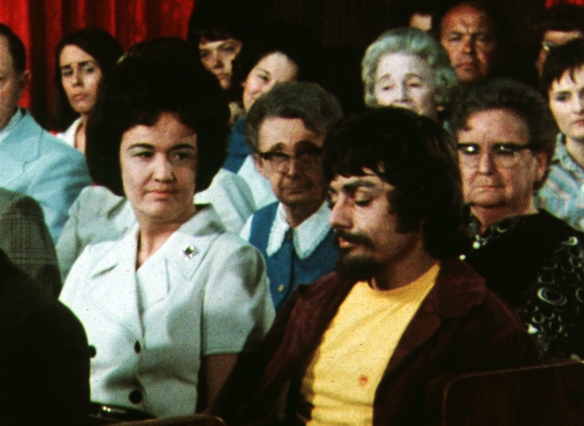