“The most exciting feature of the year! Lady in a Cage… and Olivia de Havilland is in it! A lady in a cage, locked in her own madhouse of insane intruders, powerless to stop the psychopathic horror that hems her in. Olivia de Havilland helpless before the rage of such characters as the Wino, half-crazed with his own destroying sin… the Hustler, a blousy has-been—the most amazing role Ann Southern has ever played… the Muscler, lusting for the last wild thrill of killing… the Weirdo, a blonde psycho driven to tempt, to taunt, to destroy… the Wildo, frenzied by a woman’s body or the razor edge of a sharp, glittering knife. They’re all in Lady in a Cage, the picture that is not for the weak; and perhaps, not even for the strong! If you cringe at violence, scream at fear, faint at horror—Lady in a Cage may not be for you. But if you can take the screen’s hyper-dramatic excitement—don’t miss it! Olivia de Havilland is shocking the screen as the Lady in a Cage.”

Horror Castle (AKA The Virgin of Nuremberg, directed by Antonio Margheriti) is one of the first Italian Gothic films shot in color. It was successful enough to green-light a followup the next year: Castle of Blood, starring Barbara Steele. Having coaxed the genre into two of its earliest, most popular color productions, Margheriti should be better known; but ultimately he’s merely a competent craftsman instead of an inspirational original, and the move to color inevitably proved an aesthetic step back (although financially beneficial) for the genre. Still, Horror Castle is a reasonably effective entry. The color, like the surreal lounge score by Riz Ortolani, is paradoxically both ill-fitting and striking. Margheriti’s sensual color palette echoes the auburn quality of minor Italian cult starlet Rossana Podesta and he compositionally caresses her into the macabre surroundings. 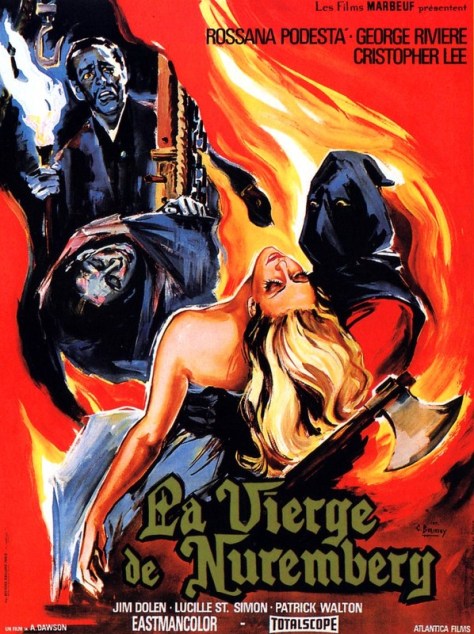 Storywise, Horror Castle is hardly earth-shaking. Newlywed Mary (Podesta) has some horrific visions within the ancestral German castle of husband Max (Georges Riviera), who resorts to the standard “you must be tired from the trip” response. Her visions include a victim of an iron maiden and a sadistic crimson executioner prone to punish sins with surprisingly gruesome methods (one involving a rat). She runs, falls, faints, and recovers in bed, to Max’s condescending “it must have been a horrible nightmare.” Marguerite mantles Mario Bava with gusto in a chase-through-the-garden scene and milks all he can from the fascistic color scheme. 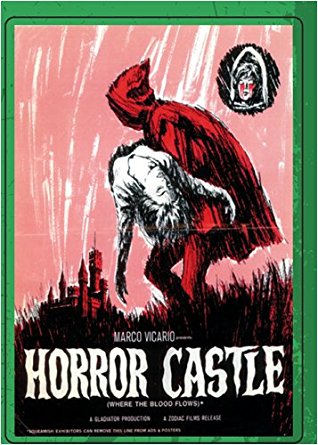 Max has a couple of apparently sinister servants in Erich (a poorly dubbed, but memorable Christopher Lee, in a supporting role) and Martha (Laura Nucci), but themes of Nazism and the Valkyries provide an unexpected contemporary, pathos-laden twist, and red herrings as well.

Despite its flaws, Horror Castle is stylish and animated; possibly Margheriti’s best work, aided by an off-the-scale fiery finale.

“Our tempting, tasty french fries go with everything. Come and get ’em. They are hot, they are delicious.”

“Hello young lovers—whoever you are—we’re glad the LOVE BUG caught up with you! But… we must insist that you do not allow his bite to effect your conduct while this theater. Public demonstrations of affection will not be tolerated here. ‘Nuff said? Thanks, the Manager.”

“Attention Night Owls… Here comes a BIG DUSK TO DAWN SHOW! You’ll see 6 Full-length features packed with action ‘n fun. All different. BRING THE GANG! COME OUT EARLY! Stay as late as you can. You’ll have a ball! Don’t miss the Big DUSK TO DAWN SHOW!” 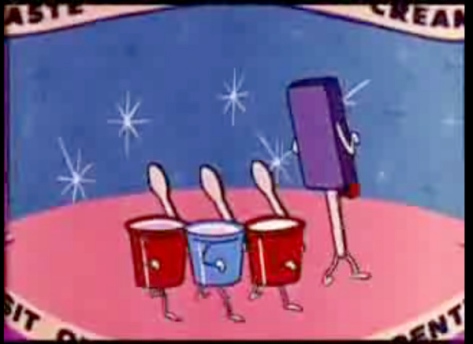 “There are words men live by. Words of strength, of wisdom, of peace. We urge you to find the spiritual comfort and guidance  we all so greatly need. Attend your place of worship regularly.”

It’s usually not a good sign when a film has three credited co-directors (Warren Kiefer, Herbert Wise, and Michael Reeves). Castle of the Living Deadalso had a trio of writers (Keifer, Reeves, and Fede Arnaud) and an international cast speaking three languages. No one was able to reign in the project.

Living Dead is known for another memorable Christopher Lee performance, for the debut of  Donald Sutherland (in a trio of roles), and for a well-executed climax written and directed by Reeves, whose work so impressed producers that he was later tapped to direct future cult favorites The She Beast (1966), The Sorcerers (1967), and The Conqueror Worm (1968) before his untimely overdose. It’s hampered most by its poverty-level budget, but despite everything it manages to project an original personality.

A group of circus performers happen upon the castle of Count Drago (Lee) who has a hobby of mummifying four-legged critters. Of course, it’s not long before he moves on to the two-legged variety, supplied by the theatrical troupe.

Numerous scenes are nonsensical, having little to do with the unfolding plot. Naturally, those include vignettes displaying various three-ring circus acts with a scene-stealing dwarf (Ennio Antonelli). Caked in opaque white makeup and black mascara, Lee gives an otherworldly, German Expressionist-styled performance, and thankfully dubs his own voice this time. Other standout performances include Gaia Germani as Laura, whose beauty Drago seeks to “preserve forever,” Mirko Valentin (who had a small part in Horror Castle) as the count’s sadistic, bug-eyed assistant, Luciano Pigozzi as Dart, and Sutherland (with Sutherland). 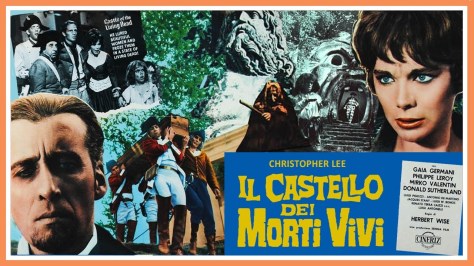 Cinematographer Aldo Tonti (who had previously worked with Fellini) manages wonders with a meager allowance and casts the film in stylishly detached, icy bleakness.

Languidly paced, which is both an asset and a hindrance, the kinetically bizarre finale is pure Reeves. 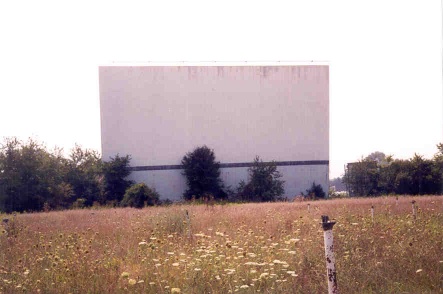 “That you for your patronage. Please drive carefully.”

This review, including the drive-in bumpers, refers to the double-feature available from Sinister Cinema.