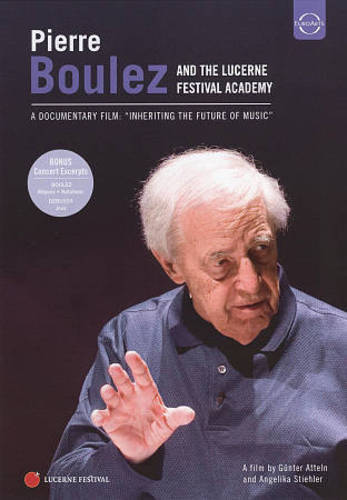 This two hour plus dvd of the 85 year old Boulez at the Lucerne Festival Academy is well filled. Documentary footage of master classes, rehearsals and spoken intros from Boulez are mixed with performance footage of Debussy’s cubist “Jeux,” Boulez’ own “Notations,” and “Repons,” (we desperately need a film of the full performance) Stravinsky’s “Rite,” Stockhausen’s ‘Gruppen,” and a student composition. This serves as an excellent primary introduction to Boulez the teacher and Boulez the communicator. He clearly and rightfully has the intense respect of his students, whom he (sometimes humorously) interacts with, giving lie to the silly myth that he is merely a stuffed-shirt academic. The students at Lucerne are, indeed, inheriting a lifetime’s worth of aesthetic dedication.

The filmmakers follow Boulez’ cue, structuring the film itself with commendable lucidity and professional visuals. It helps tremendously that the Lucerne summer festival provides beautiful location footage. Although Boulez remains an ambiguous personality, he is devoted to what he loves and, in his advanced years, he remains remarkably active in order to ensure the survival of contemporary music. Only the most jaded viewer will be unimpressed. Equally valuable is some of Boulez’ recollections on peers such as Bruno Maderna.

A delightful and valuable example of music on film that is not only an apt homage to an unquestionably great composer, conductor, and teacher, but also a homage to the younger musicians following the lead of the veteran avant-gardist. Boulez seems in no hurry to slow down and we can only hope that he will have many active years ahead of him.