1971 began with one of the most stylish horror films ever produced:  The Abominable Dr. Phibes, a near-perfect collaboration between director Robert Feust and star Vincent Price. Al Adamson produced a “masterpiece” of a very different kind with Dracula vs. Frankenstein, featuring the most (unintentionally) frightening performance of poor Lon Chaney Jr’s career and the most hilariously inept portrayal ever of the Transylvanian vampire count (by “Zandor Vorkov”). Director Eddie Romero and “star” John Ashley teamed up for bothBeast of Blood and Beast of the Yellow Night, which may be as unimaginative as they sound, but would make a worthwhile, howling triple feature with Adamson’s opus.

Jean Rollin was still gifting the world lesbian vampires with Caged Virgins (AKA Requiem For A Vampire) and The Shiver Of The Vampires. Following suit were Stephanie Rothman with The Velvet Vampire, Ray Austin’s The Virgin Witch (starring twins Anne and Vicki Michelle), and Jess Franco with the bluntly titled Vampyros Lesbos and She Killed In Ecstasy, both starring the tragically short-lived cult figure Soledad Miranda. Not to be outdone, Hammer Studios contributed to the thriving same-sex bloodsucker subgenera with Ingrid Pitt as a “Calgon Take Me Away” Countess Dracula (directed by Peter Sasdy), and with Lust for a Vampire (directed by Jimmy Sangster and starring Yutte Stensgaard). Neither of these were as explicit as they promised and probably should have been. Considerably better was another Hammer opus with identical siblings (Playboy playmates Mary and Madeleine Collinson): Twins of Evil, stylishly directed by John Hough and featuring a superb authoritarian performance by Peter Cushing. 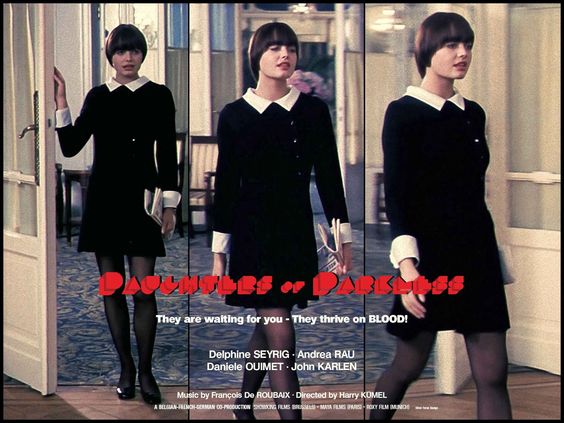 However, it was Harry Kumel’s Belgian Daughters of Darkness, starring Delphine Seyrig and Danielle Ouimet, that made the biggest impact, becoming an international cult hit that is still referenced today. Of course, hetero bloodsuckers were not be left out and had their moment under the sequel moon in The Return of Count Yorga (directed by Bob Kelljan and starring Robert Quarry), which failed to repeat its predecessor’s success. Night of Dark Shadows by Dan Curtis improved on the previous years effort, despite an absent Jonathan Frid. Oddly, it was the Japanese who were perhaps most suited to Transylvanian folklore in 1971 with Lake of Dracula(directed by Michio Yamamoto). 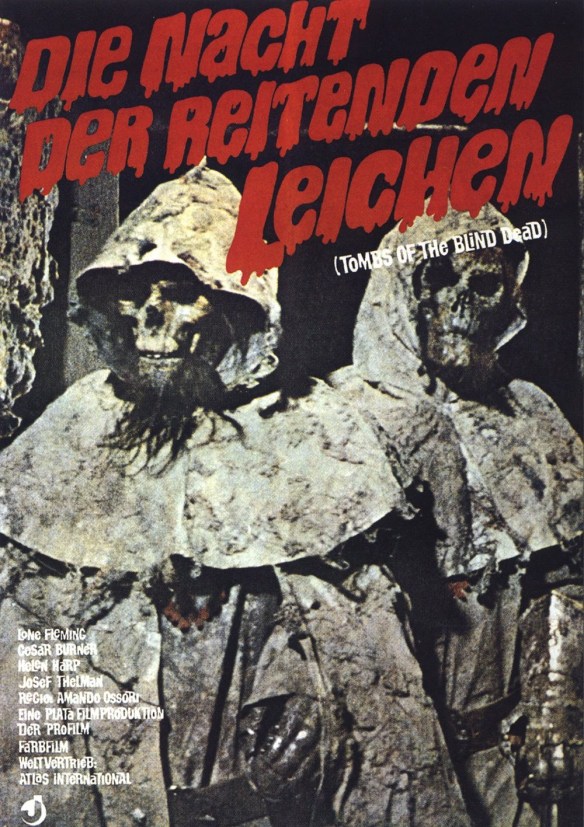 Amando de Osario charted unexpected territory with his zombie monks in Tombs of the Blind Dead, the first of his Blind Dead series (he had previously made the unrelated vampire opus, Fangs Of The Living Dead, in 1968). Although short on actual plot, it’s arguably Osorio’s finest moment. Scenes of the blackened, dead Templars rising from their graves (resurrected by Satan) and mounting horses (juxtaposed to Anton Abril’s highly effective, eerily faint score) to ride into the slaughter (filmed in slow motion) are spine tingling. 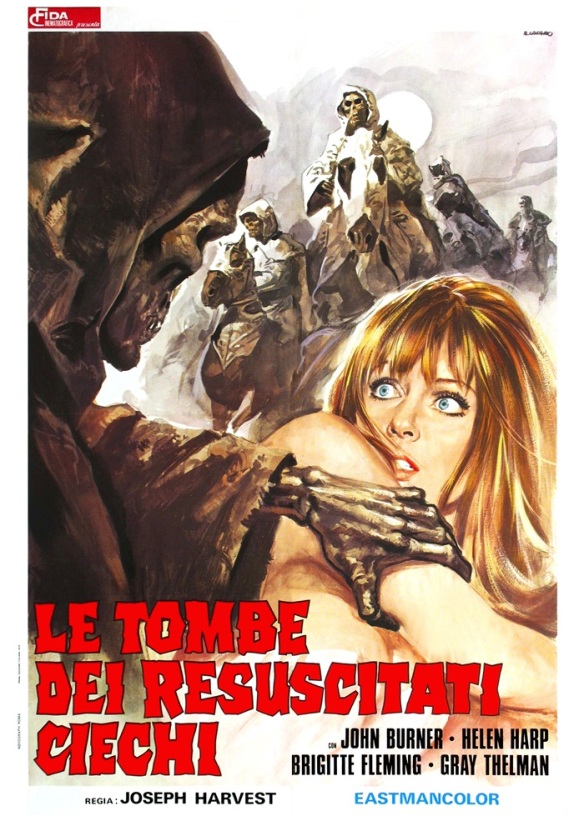 These are zombies of a different sort who raise their swords to slash at victims, before draining their blood. Scenes of the Spanish Inquisition, failed crusades, misogynistic torture of women, and lesbianism are surprisingly low-key, and often poetically surreal. Although Osorio’s influences (including Mario Bava’s color palette) are in full evidence, his is a strongly original film, almost painterly. Decaying abbeys and a potential victim standing motionless to avoid the army of blind marauders evoke a sense of dread. Even a massacre on a train is artfully restrained. 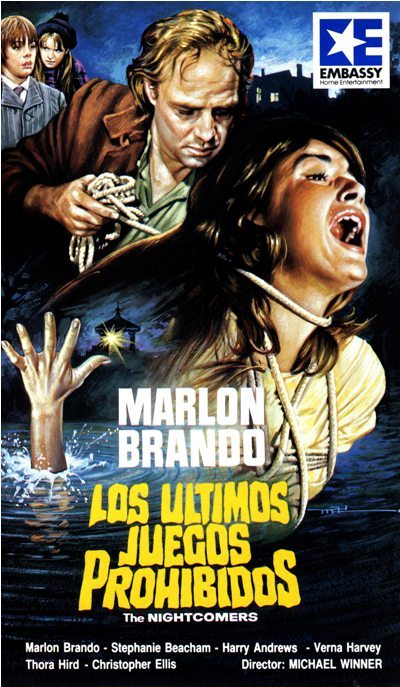 Michael Winner presented a literal-minded prequel to Harry James’ “Turn Of The Screw” with The Nightcomers, starring a sadistic Marlon Brando who still managed to prove the best actor of his generation despite the foolish Irish accent forced upon him. Co-star Stephanie Beacham gave as good as she received, but they failed to liven a hopelessly dour film. Gordon Hessler couldn’t give new life to Murders in the Rue Morgue, either, and Ted Hooker received no originality awards for Crucible of Terror, which rehashed the mad-sculptor-using-dead-models plot. Lightning didn’t strike twice for Creatures the World Forgot when Dan Chaffey and Hammer plagiarized Dan Chaffey and Hammer. Astoundingly, they seemed to have forgotten that Raquel Welch in a loincloth was a major selling point of their previous One Million Years B.C (1966). Seth Holt died prematurely shortly before completing Blood from the Mummy’s Tomb.  Although the fourth in Hammer’s mummy series, it was stylishly directed with the ever reliable Andrew Keir and an alluring, but probably miscast, Valerie Leon. Robert Louise Stevenson aptly had dual representation in 1971 (albeit with variations) in I, Monster starring Christopher Lee and Peter Cushing (directed by Steven Weeks) and Dr. Jekyll and Sister Hyde, which found Roy Ward Baker with stars Ralph Bates and Martine Beswicke succumbing to tongue-in-cheek fun. Amicus and Robert Bloch also struck box office gold with their anthology, The House That Dripped Blood, starring Lee, Cushing, and Pitt.

Old Nick seemed on the verge of a major comeback with The Devil’s Nightmare (directed by Jean Brismée), The Devil’s Widow (directed by Roddy McDowell), Feast Of Satan (José María Elorrieta), and Brotherhood of Satan (directed by Bernard McEveety and starring Strother Martin!). David E. Durston gave Satanism a rabies-themed spin in the cult hit I Drink Your Blood, but Lucifer would have to wait a couple of years for a certified box office hit worthy of his reputation.

Peter Sasdy and Hammer went a slightly different route with Hands of the Ripper, which could as well have been titled “Daughter of the Ripper.” Boris Karloff’s last released film was the Jack Hill/Juan Ibanez hybrid Isle of the Snake People. Having died two year previous, Boris was spared any embarrassment. No such luck for the cast and crew of The Incredible 2-Headed Transplant (directed by Anthony Lanza) whose only consolation might have been everyone forgetting about it after the following year’s The Thing With Two Heads (1972). Although not quite as classic as its title, Let’s Scare Jessica to Death, directed by John Hancock and starring Zohra Lampert, is creepy enough to warrant its cult status.

Rather than following trends,  Mario Bava was yet again laying down groundwork for lesser hands to follow with the early slasher Twitch Of The Death Nerve. The Italian giallo genre, also given life by Bava, was still going strong with Iguana with the Tongue of Fire (directed by Riccardo Freda), Black Belly of the Tarantula (Paolo Cavara), the overrated The Night Evelyn Came out of the Grave (Emilio P. Miraglia) and Dario Argento’s Cat O’ Nine Tales, starring the underrated James Franciscus and Karl Malden. 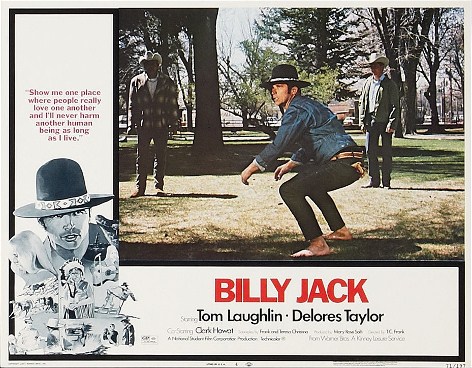 A delightfully strange artifact of its time is Tom Laughlin’s Billy Jack, about an ass-kicking Native American progressive. We could really, really use right one of those right now, so much so that Billy Jack‘s scheduled for an article of its own later this year.

Another oddball hybrid genre film and 70s artifact is Werewolves on Wheels (directed by Michel Levesque, who had previously served as an art director for Russ Meyer), but it’s not quite what its title seems to indicate. Satanic monks figure here, and they drug members of the Devil’s Advocates biker gang kidnap one of the gang’s girlfriends, hoping to present her as a bride for Satan. The cycle gang, most of whom were in fact played by actual bikers, set out to rescue their missing comrade. The Black Mass is is surprisingly atmospheric and is clearly influenced by the plethora of Satanic themed films of the period. It isn’t until well after the midway mark that we seen an actual werewolf (very Paul Naschy-like) and the attack scenes are off-camera. Despite the title, marketing, and sex scenes, this is a solid “B,” which  tries to be as much an arthouse as exploitation. Well-shot and edited, its likely to disappoint bad film lovers looking for something especially wretched. 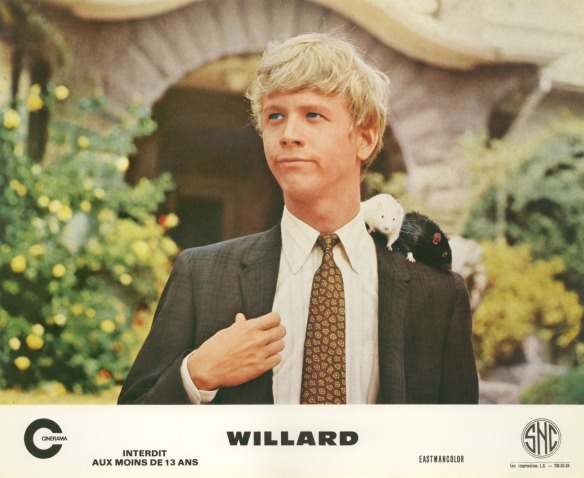 Willard (directed by Daniel Mann), about a misfit and his rat, was a surprising critical and box office success, inspiring a legion of killer animal films, including its vastly inferior sequel, Ben (1973). Willard was later remade in 2003 by Glen Morgan starring Crispin Glover, but that effort became more an unintentional parody. Oddly, the original was produced by Bing Crosby’s production company and starred Bruce Davison, Sondra Locke, and Elsa Lanchester. Davison is perfectly cast, bringing a natural, introverted quality to Willard Stiles (predictably, Glover was too weird-on-the-sleeve). Although the role made Davison’s reputation, he’s so damned good, one wonders why he didn’t become a major star. Cheated of his inheritance by a mean business man (Ernest Borgnine), Willard, who is kind of like a basement dwelling Dr. Doolittle, uses his pet rat Ben (and Ben’s considerable offspring) to exact revenge. The rest of the cast shines: Elsa Lanchester as a demanding mother, Borgnine, and Sondra Locke as the girlfriend Joan. However, it’s Ben and his rodent army who naturally steal the show, and even Willard himself is going to learn a lesson about making his rodent jealous. It’s not The Birds (1963), but it’s quite good in its own right. Although Mann is credited as director, the real behind the scenes geniuses were the rat trainers who did wonders with an army of rodents—and without CGI, even.