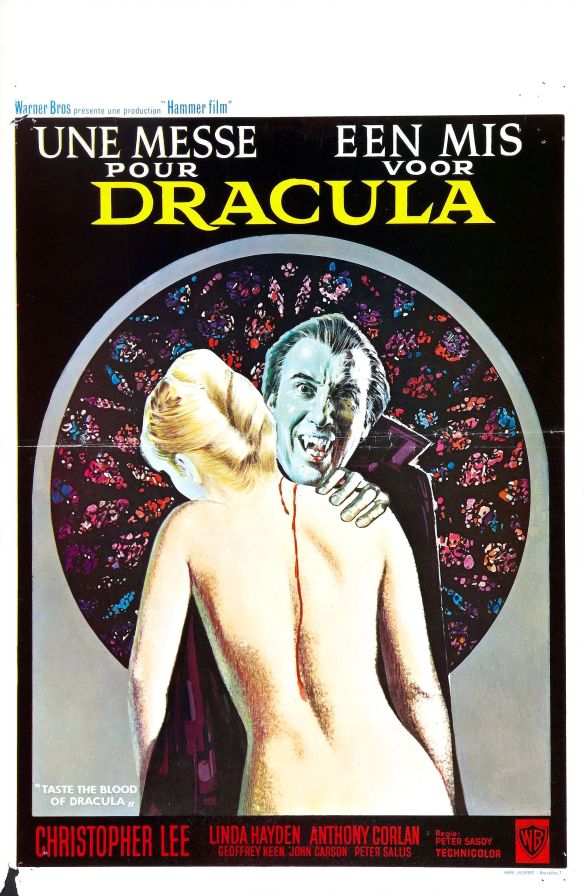 The 1970s were probably the most prolific decade in production of exploitation and horror films. The decade started off with Gordon Hessler’s mediocre Cry of the Banshee, co-starring Vincent Price and Diana Rigg. Daniel Haller’s adaptation of The Dunwich Horror was also surprisingly uneven, despite its well-received source material. Hammer Studios was still in full throttle, although its output increasingly met with mixed reviews and decreasing box office. Peter Sasdy’s Taste the Blood of Dracula was considered by many to be the last decent Hammer take on the infamous Count. Roy Ward Baker’s The Scars of Dracula was universally panned by critics. Scars‘ star Christopher Lee then made a stab at the character for a different studio in Jess Franco’s [1] Count Dracula, which co-starred  Klaus Kinski and Herbert Lom. Noticeably shot on a lower budget, Franco’s Draculawas deemed a faithful adaptation of the novel, but a noble misfire. Franco and Lee also teamed up for The Bloody Judge, which was a second-rate rehash of Michael Reeves’ final film, Witchfinder General. 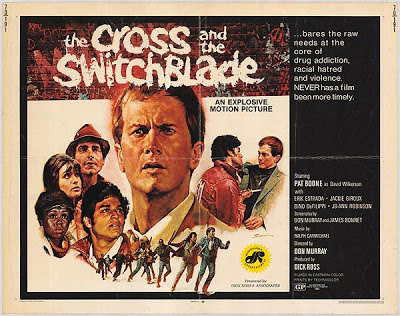 Michael Armstrong’s Mark of the Devil, starring Herbert Lom and Udo Kier, was another offshoot of the late Mr. Reeves’ swan song, with the addition of graphic torture, and it’s reputation as one of the most revolting grindhouse films ever made still holds strong nearly a half century later. Piers Haggard’s Blood on Satan’s Claw was the third Witchfinder General copycat in one year. It disappeared quickly (rightfully so). At the opposite end of the spectrum is the camp-fest fundamentalist Christian exploitation Cross and the Switchblade, which aptly cast the whitest white man who ever lived—Pat Boone—as Hoosier Pentecostal preacher David Wilkerson, going to the ghetto to convert gang member Nicky Cruz (Erik Estrada). It was such a hit with the fundie circuit that they even produced a cross-promotional comic book that was littered throughout church pews to take home and keep “if you got saved.” 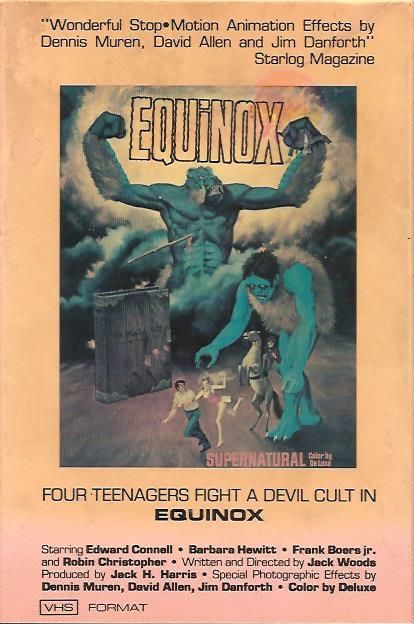 The primary influence on Sam Raimi’s The Evil Dead (1981), the microbudget horror Equinox has a substantial cult following, enough to receive the Criterion Collection treatment. Equinox is a holy grail for lovers of  backyard filmmaking, and is almost as famous for its making of narrative. The story began with three teenagers, David Allen, Dennis Muren, and Mark McGee, who got together and made a monster movie. Discovering the likes of Willis O’Brien and Ray Harryhausen through the pages of Forrest J. Ackerman’s influential “Famous Monsters Of Filmland,” aspiring stop-animation animator Allen placed a personal ad in a 1962 issue of FM, inviting lovers of King Kong to correspond. Muren, whose monster memorabilia collection had been featured in an earlier article of the magazine, was the first to respond, followed by McGee. Shortly after that initial introduction, the three were meeting regularly for screenings and discussions of creature features and experimenting with 16 MM shorts. In 1965 Muren received money from his grandfather to make Equinox.

Influenced primarily by Jacques Tourneur’s Curse of the Demon (1957), the film also pays homage to Don Siegel’s Invasion of the Body Snatchers (1956), Robert Gordon’s It Came from Beneath the Sea (1955), and Don Chaffey’s Jason and the Argonauts (1963). The cast includes Muren’s grandfather as a hermit who is trampled on by Allen’s stop-motion demon, the Taurus. Ackerman has a voice cameo via a tape recorder playing in the hospital. Pulp fantasy author Fritz Leiber (once an apprentice to H.P. Lovecraft) plays Professor Waterman, who is in possession of a medieval book, which contains a gateway to another dimension called the Equinox. The movie begins on a picnic when David (Edward Connell) and Susan (Barbara Hewitt) discover Waterman’s book and unintentionally summon forth a demon.

There are two versions of Equinox. In the original, the narrative is ambiguous and really just an excuse to unleash stop-motion monsters (courtesy Allen and Jim Danforth). In the second version, Jack Woods, credited as a co-director with McGee and Muren, over-explains everything to the point of tedium. Although neither cut is a long-lost masterpiece, the original, pre-tampering version is definitely superior. But it’s the winning extras in the Criterion Collection disc that are the highlight, spinning a narrative of fan love for the genre, paid homage by commentary from the surviving principals.

Equinox has some “American dream” success stories: Muren went on to become an Oscar-winning visual effects artist for Industrial Light and Magic, and worked on Willy Wonka And The Chocolate Factory, Flesh Gordon, the original Star Wars trilogy, Close Encounters of the Third Kind, the television series “Battlestar Galactica,” E.T., The Abyss, Ghostbusters II, Terminator 2, Jurassic Park,  A.I., Hulk, War of the Worlds, and Star Wars: The Force Awakens, among many others. David Allen also had a successful career, working on Flesh Gordon, The Howling, Q, The Hunger, Young Sherlock Holmes, Ghostbusters II, Willow, Puppetmaster, and Honey I Shrunk The Kids, before dying prematurely in 1999. McGee had a career in B-movies, and Woods went on to work in sound.

Elsewhere in 1970, Veronica Lake embarrassed herself by cloning Hitler in Brad F. Grinter’s howler Flesh Feast, which proved to be the actress’ final film. Massimo Dallamano transported Oscar Wilde’s protagonist to the swinging Sixties in The Secret of Dorian Gray—possibly a weird enough film to be a contender on this site. This was Dallamano’s third interesting film in three years, the first two being 1968’s underrated A Black Veil for Lisa (often classified as giallo), followed the next year by The Devil in the Flesh.  Best known for writing and lensing the Sergio Leone westerns starring Clint Eastwood, Dallamano got a relative late start directing and only made a few more films before dying prematurely in 1976, the victim of a car accident.  Andy Milligan attempted a mod “Sweeney Todd” with Bloodthirsty Butchers, which is primarily of interest to diehard fans of the director (yes, these exist). 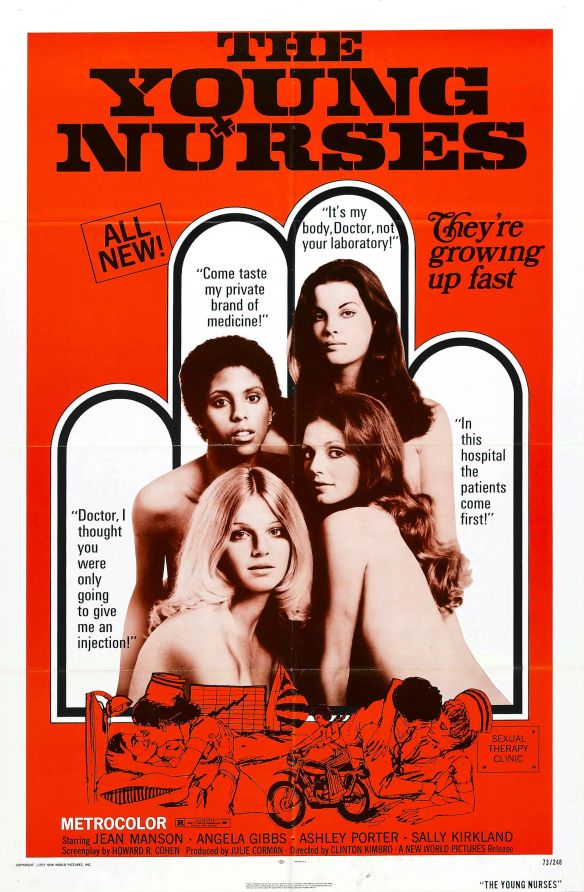 1970 was also the year Roger Corman broke away from AIP, started his own production company with New World Pictures, and debuted Student Nurses, which was marketed as a “nursesploitation” for the drive-in market. However, as written and directed by Stephanie Rothmans, it was more of a soap opera with a minimal amount of nurses showing their bedside manner. Regardless, it became something of a cult film, spawning the path for countless imitators, directed by men who, naturally, were more apt to focus their cameras on female cleavage. Of course Russ Meyer never had any qualms to begin with, as he again proved in 1970s Beyond The Valley Of The Dolls. 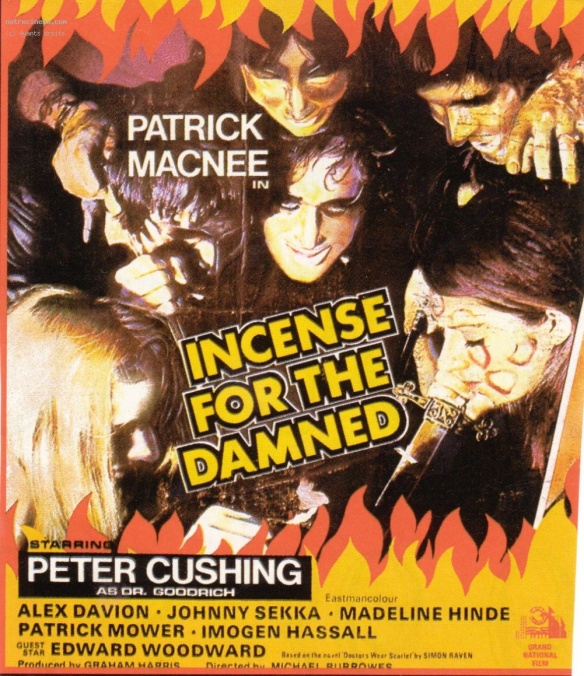 Hammer Studios did the Baron’s monster a truly bad turn with The Horror of Frankenstein, directed by Jimmy Sangster and starring Ralph Bates (stepping in for Peter Cushing), Veronica Carlson, and Kate O’Mara. Cushing appeared elsewhere, albeit briefly, in Incense for the Damned. This was another noble misfire, through no fault of director Robert Hartford-Davis, who disowned it after Titan International  tampered with the film and slapped on a traditional vampiric ending, which nonsensically contradicted the movie’s initial premise of vampirism as a psychosexual disorder. The excellent work by Cushing, Edward Woodward, and Patrick Macnee couldn’t save what turned into a confusing mess thanks to interfering executives. George Romero later perfected Incense‘s original concept in Martin (1978), which is often cited as a masterpiece of its kind. 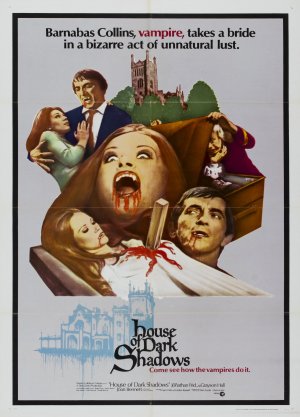 Dan Curtis took his cult TV vampire soap opera to the big screen with House of Dark Shadows. Although Jonathan Frid naturally shone as Barnabas Collins, it was basically a condensed retelling of the series, with Curtis showing little sense of adapting to the demands of cinema. 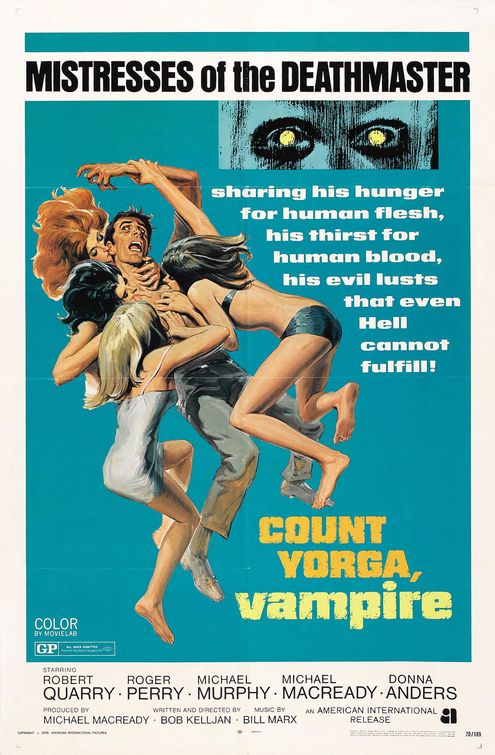 Sensing its Dracula series was getting stale, Hammer took a side route with a different bloodsucker in Count Yorga, Vampire, directed by Bob Kelljan and starring Robert Quarry. It was successful enough to warrant a sequel the following year.

The 1970 horror genre may be most remembered for the beginning of an epic tidal wave of lesbian vampire films. Of course, Jean Rollin had already been at it, and contributed The Nude Vampire this year. The Blood Rose (directed by Claude Mulot) was a critically well-received entry, dubiously dubbed as “the first sex-horror film.”Despite it’s cult status, it’s almost nonexistent in the home video market after briefly appearing on DVD.

It was Hammer, however, who found the lesbian goldmine with Roy Ward Baker’s The Vampire Lovers, co-starring Ingrid Pitt and Peter Cushing. It was the first of the studio’s “Karnstein Trilogy.” Despite mixed reviews, its box office was immense, and it gave a new, albeit brief, wind to a studio that had recently been floundering. Of course, it’s really soft-core sexploitation with teeth, supplied by scream queen Ingrid Pitt (who became an icon for the studio, despite the brevity of her reign). 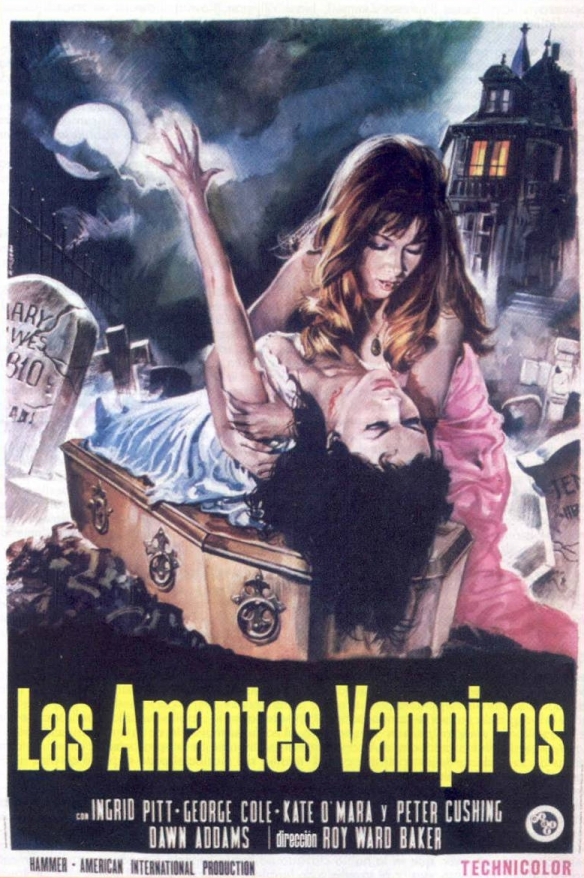 Carmilla (Pitt, adopting the name of the heroine from Sheridan Le Fanu’s 1872 novella), the house guest of General Spielsdorf (Cushing, formidable as usual), puts the bite on his niece’s cleavage and vanishes. At another stop, she puts the same bite on Emma (Madeline Smith) and transforms the victim’s home into a landscape of chaos, leading to a finale of doomed love. Sympathetic and passionately erotic, the husky-voiced Polish Pitt is perfectly cast as the dark femme fatale—but it was her hourglass figure and willingness to strip down and engage in same sex hanky panky that made her a Gothic sex symbol. She followed this one with Countess Dracula (1971), the Amicus anthology House That Dripped Blood (1971), and The Wicker Man (1973).

We end the year with an embarrassing swan song for actress Joan Crawford: Trog (directed by Freddie Francis), which has a reputation as a camp classic. It’s doubtful that it would be remembered at all without Crawford as Doc Brockton, who discovers a missing link in a cave. See Doc feed Trog rubber lizards, “hypo-gun” him, and civilize the beast by playing catch and listening to Mozart, before a villainous landlord (Michael Gough) interferes and unleashes the poor rubber-masked mini-Kong Trog on the neighborhood. Indeed, ’twas beauty killed the beast. Produced by Herman Cohen (I Was a Teenage Werewolf and Konga), Trog feels like his film, as opposed to anything done by Francis—who somehow managed to survive the mess. Taking her role seriously, Crawford is a hoot and supplies the film with its entertainment value, making it a perfect double feature with Mommie Dearest(1981).