Although Peter Cushing passed this mortal coil in 1994, he made a recent, posthumous appearance—albeit a digital one—in what is probably his most famous non-Hammer role as Grand Moff Tarkin in Star Wars: Rogue One. His debut film performance was, aptly enough, for Universal horror icon James Whale in Man in the Iron Mask(1939), but it wasn’t until Terence Fisher’s 1957’s Curse Of Frankenstein for Hammer Studios that Cushing secured his iconic niche. Unlike the Universal Frankenstein series, Fisher focused on the doctor himself, as opposed to the monster. With his frosty blue eyes, silver-tongued elocution, and gaunt frame, bringing a fervent athleticism to his early performances, Cushing was ideally cast. 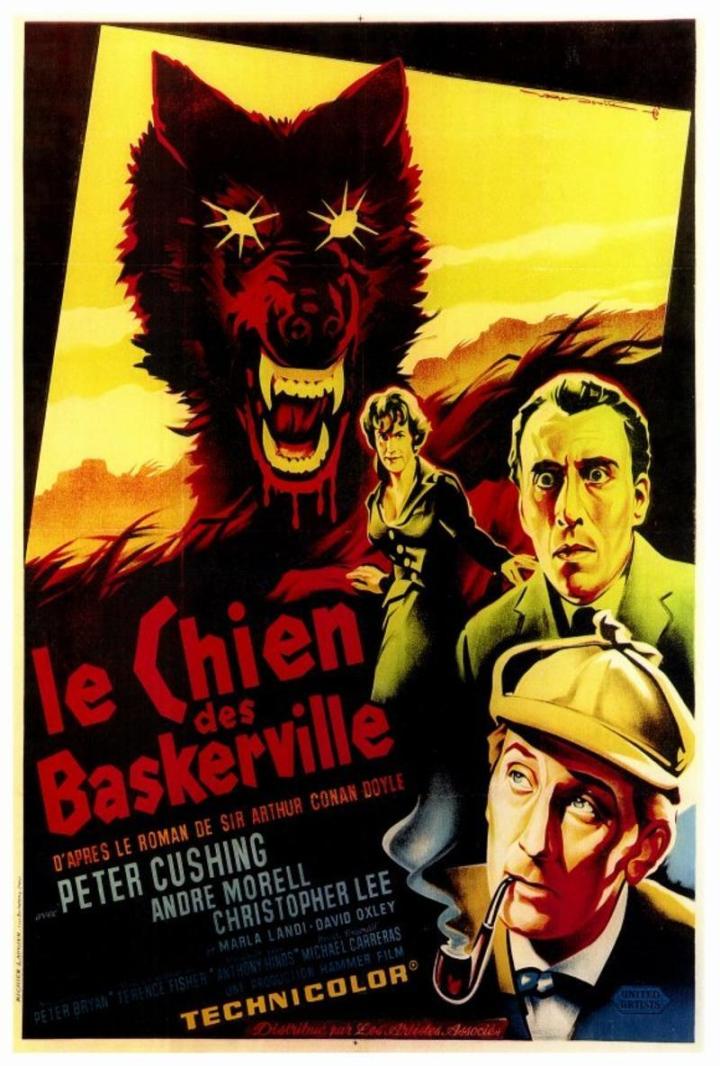 Echoing John Huston’s brilliant deduction that Humphrey Bogart’s villainous screen qualities could be transposed to that of a protagonist in The Maltese Falcon, Terence Fisher next cast Cushing as the quintessential Van Helsing in Horror Of Dracula (1958). These dual roles, Frankenstein and Van Helsing, cemented Cushing as a horror genre star. It was typecasting that kept his services in demand, and for which he was grateful. 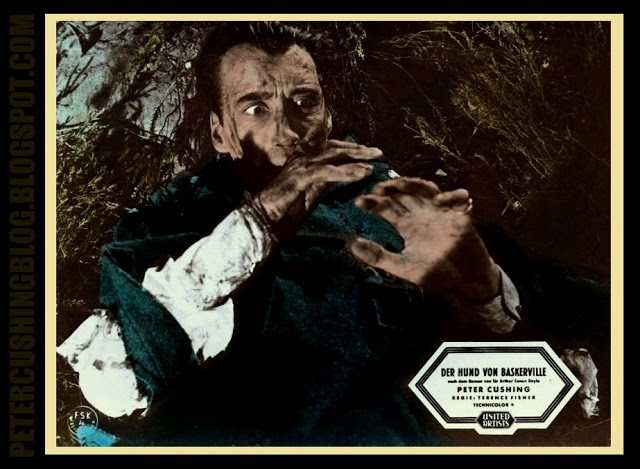 He also made an excellent Sherlock Holmes in Fisher’s 1959 version of The Hound of the Baskervilles, again cast opposite Lee. It’s possibly the best screen adaptation of Sir Arthur Conan Doyle’s famous novel, and one of Hammer studio’s finest hours. Cushing brings an irreproachable, authentically physical fire-and-ice quality to the role. The film is relatively faithful to the novel, which will surprise those expecting Fisher to transform it into a horror opus—although it has his trademark red-blooded pacing and brooding atmosphere. Lee, as Sir Henry, may not be as exquisitely cast, but brings flair to the character. Someone must have forgotten to tell Fisher, Cushing, cinematographer Jack Asher, set designer Bernard Robinson, and composer James Bernard that this was an overly familiar story, because they approach it with a refreshing sense of discovery. Lee recalls his genuine affection for his late co-star in an interview included on the DVD. Unlike their Universal Horror predecessors Boris Karloff and Bela Lugosi, Cushing and Lee became best of friends. Co-starring opposite each other in twenty-four films, their chemistry was undeniable, and although they did substantial solo work, their names are practically synonymous.

Cushing was cast as the infamous Dr. Knox for Britain’s Shepparton Studio in Flesh And The Fiends(1960, written and directed by John Gilling). Similar to his Victor Frankenstein, Cushing’s Knox is obsessed by his work. His is an icy, stern, brash, one-eyed doctor, but not without a degree of introspective sympathy, in sharp contrast to the deplorable Burke and Hare (as portrayed here by George Rose and Donald Pleasance). As with many “mad doctor” films, Knox is driven to immoral extremes by a medically regressive climate. The cast, which includes an early performance by Billie Whitelaw (best known as the literal nanny-from-hell in The Omen), is uniformly excellent. The production values surpass even the early Hammer entries; surprisingly, it’s also far more risqué. Gilling’s direction is assured,with an eye for detail, particularly (and admirably) gutter detail. Not so much horror as history, it’s a seriously underrated gem featuring a striking performance from Cushing.

The Skull (1965, directed by Freddie Francis and written by Milton Subotsky from a story by Robert Bloch) is low-key hokum from Hammer’s rival, Amicus. Christopher Lee has a guest supporting role and, like Cushing, is in fine form. The extended prologue, about the robbery of the Marquis de Sade’s skull, is virtually silent and effectively filmed. Years later, the skull comes into the possession of demonologist Christopher Maitland (Cushing) after briefly being owned by Matthew Phillips (Lee). Predictably, the skull is possessed, driving the initially skeptical Maitland to despair and insanity before murdering Phillips. While directed with period flair, the psychedelic scenes of a floating skull are as preposterous as the film’s premise, which is not helped by Subotsky’s padding out of Bloch’s short story. Working against a problematic script, the film is entertainingly effective, due primarily to Lee’s atypical role, Cushing’s spirited performance, blue direction, lurking cinematography, and an almost surreal dream sequence (not in the script and improvised by Francis). 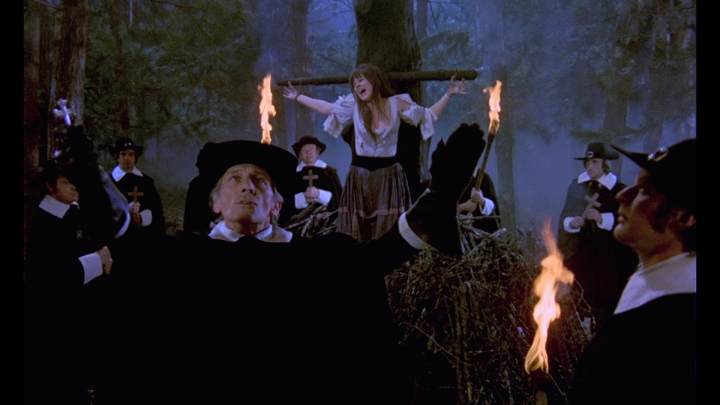 1971’s Twins of Evil (directed by John Hough and written by Tudor Gates) was Hammer’s final and the best of its “Carmilla” trilogy. After the death of their parents, the Gelhorn twins, Freida and Maria (Madeline and Mary Collinson) move to the village of Karnstein to live with their fanatical, witch hunting uncle Gustav Weil (Cushing). Understandably unhappy living with a fundamentalist kook, Freida Gelhorn (the naughtier of the twins), sneaks out of her new home, heading straight to the purported den of sin: the castle of Count Karnstein (Damien Thomas). Unaware that the count has recently joined the undead, Freida’s destiny is a foregone conclusion. Despite nudity, which is to be expected (given that the Collinson twins were Playboy’s first sibling centerfolds) and lesbian vampires, Twins Of Evil is commendably reserved. The first film completed after the death of his wife, Helen (from which he never recovered), Cushing’s sense of personal tragedy poignantly attaches itself to his performance.Having aged considerably , the actor is downright skeletal in appearance, frighteningly authoritarian, and pierces the film. Hough’s direction is enthusiastically stylish and the script, though flawed, is interesting in that, apart from Maria, the remaining characters are largely unsympathetic. The puritan villagers are an ignorant lot-hypocritical and as evil as the count they hate. 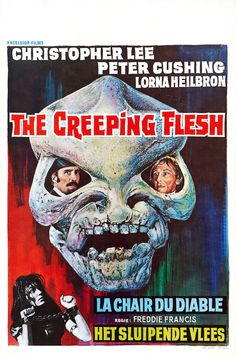 Creeping Flesh (1973, directed by Freddie Francis, written by Jonathan Rumbled and Peter Spenceley) is another underrated film deserving of broader recognition. With a Hammer director and a cast of Cushing and Lee, the writers intentionally craft a script that feels as if produced for that studio from the decade before. Victorian doctor Emmanuel Hilden (Cushing) arrives in London from New Guinea with a skeleton of a giant, primitive man that predates the Neanderthal. The skeleton differs from its descendants in possessing a far larger brain capacity, which Emmanuel believes could revolutionize academic theories of evolution. The discovery further exasperates the preexisting jealousy of Emmanuel’s psychiatrist brother (and  bitter rival) James (Lee).  A secret exists between the two brothers; James is the sadistic administrator of the asylum where Emmanuel’s wife is committed. Having lied to his daughter, Penelope (Lorna Heilbron), telling her that her mother is dead, Emmanuel has opened himself up to James’ blackmail and a mad scientist vs. mad scientist scenario.

When Emmanuel begins washing the skeleton down, flesh regenerates on its finger, which he severs and places in a jar.  Swollen, pink, bleeding, and detached from the rest of its body, the finger—by no coincidence—takes on a phallic appearance. After examining the creature’s blood, Emmanuel deduces that it is evil. Evil is a disease, evil is an essence, and the blood of evil can be used to counteract evil. Meanwhile, Penelope has discovered the truth about her mother and is going insane herself, which leads Emmanuel to inoculate her with the creature’s blood. Soon, she became a sex crazed fiend wearing a low-cut crimson dress. The ancient evil is unleashed as a hooded, creeping flesh figure before one brother gets the upper hand. The appearance of the monster is belated, with the primary focus being on sibling rivalry.

The narrative is silly, convoluted Gothic, but its stylish direction and  gripping acting sell it. Cushing’s frailty embodies the character with obsession giving way to decaying desperation. Lee brings a forceful arrogance to his role as the psychiatrist whose ambition is to minimize his brother’s accomplishment. Heilbron also excels as the virginal Victorian daughter who transforms into an oversexed looney tune. Unfortunately, as a throwback to the previous decade, the film did not do well at the box office, but has since become a cult favorite with a superior Cushing/Lee teaming. 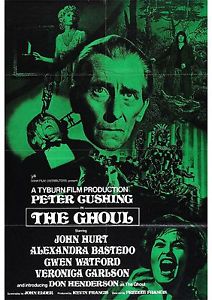 1975 brought The Ghoul (directed by Freddie Francis and written by Anthony Hinds) starring Cushing, the recently departed John Hurt, and Veronica Carlson. In contrast to the overwritten The Creeping Flesh, The Ghoul has a thin, underdeveloped script. Fortunately, the film is briskly paced with another superb performance from Cushing. After her motorcar breaks down, Daphne (Carlson) tries to find her way through fog-shrouded moors, stumbles upon the old dark house of former clergyman Lawrence (Cushing), and is whisked away by Lawrence’s groundkeeper Tom (a sleazy John Hurt). Unknown to her, Tom procures victims for his employer’s cannibalistic son, the ghoul of the title (Don Henderson).

The ghoul’s cannibalism is never explained, nor is the preoccupation with Indian religious ceremonies. Francis’ cinematography is exemplary as usual, but his overall direction is languid. Still, Cushing’s raw, melancholic performance elevates this tenaciously grim film.

Cushing’s last starring role in a theatrical feature was At the Earth’s Core (1976). After this, his roles were confined to supporting ones, which included his Grand Moff Tarkin for Star Wars. Aptly enough, he also appeared (albeit briefly) in a cult film that same year: Shock Waves, which is about Nazi zombies. It’s not as gruesome or exploitative as it sounds. Rather, it’s a sleeper with John Carradine and Cushing bringing character to the film. Cushing graduated from that appearance to being an actual (ex-) Nazi in the first-rate “The Silent Scream” episode of the short-lived series “Hammer’s House Of Horrors.” Cushing’s last co-starring role with Lee (along with Vincent Price and John Carradine) was House of Long Shadows. Unfortunately, it’s a pedestrian effort with no surprises. In his next-to-last role, Cushing resurrected his detective in the 1984 TV movie “Sherlock Holmes and the Mask of Death.” Again, he gives dignity to the role, although the film itself cannot hold a light to Hound Of The Baskervilles. Still,it aptly brought him nearly full circle. 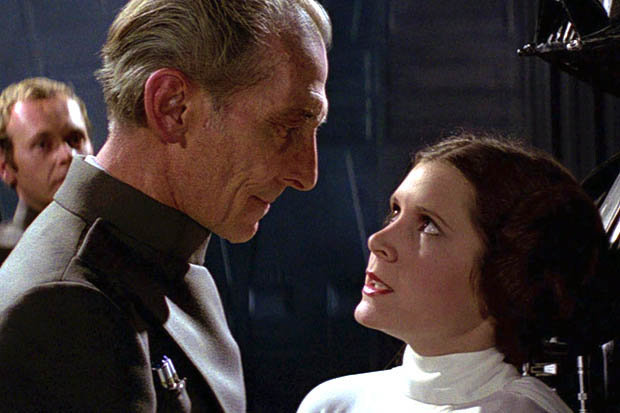