We start our 1967 genre survey with a considerable amount of barrel-bottom scraping with two of Herschell Gordon Lewis‘ most execrable efforts: The Gruesome Twosome and Something Weird. He also made the somewhat better A Taste of Blood the same year. With a bigger budget and longer running time (118 minutes), Lewis referred to Blood as his “Gone With The Wind” masterpiece.  Actually, it’s modeled more after Roger Corman than Victor Fleming. Lacking the excess of Lewis’ previous films and featuring a “classic” monster in Dracula, it’s mostly seen as a noble misfire by Lewis’ cult.

Elsewhere in 1967, Larry Buchanan, a director on par with the likes of Lewis, William Beaudine, Ed Wood, or Phil Tucker, produced a pair of jaw-dropping bombs in Mars Needs Women and Creature of Destruction. Jean Yarbrough, who had previously helmed such masterpieces as The Devil Bat (1940), directed Basil Rathbone, Joi Lansing, John Carradine and Lon Chaney, Jr. in Hillbillies in a Haunted House. Rathbone died shortly after filming and was spared embarrassment from a film so wretched that it’s virtually unwatchable. His surviving co-stars and director weren’t as fortunate. Nazis-on-ice figure prominently in Herbert Leader’s The Frozen Dead, which at least has some unintentional humor going for it. Joan Crawford went Beserk for director Jim O’Connell. The film’s a paltry effort, but Joan is a humdinger channeling her inner Mommie Dearest.

A blind Boris Karloff got whupped by Viveca Lindfors in Cauldron Of Blood, but the on-his-last-leg genre icon fared considerably better in Michael Reeves’ excellent cult classic, The Sorcerers. Harald Reini did Christopher Lee few favors when directing the actor for The Torture Chamber of Dr. Sadism. John Gilling likewise missed the mark in Hammer’s The Mummy’s Shroud. Away from Hammer Studios, Terence Fisher was out of his element in his final sci-fi opus[1] , Island of the Burning Damned, starring Lee and Peter Cushing. By his own admission, Fisher had no enthusiasm for science fiction and went back to his Hammer Horror niche later in 1967 with Frankenstein Created Woman.

Fisher favorite Peter Cushing made a sharp departure from his typical acerbic-but-classy screen persona by dipping into pure sleaze for Corruption (directed by Robert Hartford-Davis). Although most sources give the release date as 1968, it’s also listed as a 1967 production. Most likely it’s the later date, but since we have that year already filled up, we’ll cheat a tad in placing it here. A sordid hybrid of The Corpse Vanishes (1942) and Eyes Without A Face (1960), Corruption can be summed up by the Blu-ray cover art image of a middle-aged Cushing taking a knife to the throat of a scantily clad buxom blonde. He plays surgeon Sir John Rowan, engaged to fashion model Lynn Nolan (Sue Lloyd). An accident (caused by Rowan) leaves Lynn disfigured. After conventional skin-grafting plastic surgery fails, Sir John resorts to slightly unorthodox methods to restore her back to potential trophy wife status, which involves medical and Egyptian mumbo jumbo along with removing the pituitary gland of a corpse. The treatment works, but only temporarily. Soon, Lynn is back to being an ugly duckling. So what does Sir John have up his sleeve? Fresher specimens, which can only be supplied via a murder spree. This being 60s swinging London, there is a ready supply of hot female victims with raging pituitaries.

Lloyd steps into the role that Luana Walters filled in The Corpse Vanishes and Cushing replaces Lugosi. It goes without saying that the Hammer thespian’s work far surpasses the Hungarian vampire’s. That might not be much of a compliment, since Lugosi was, with few exceptions, one of the horror genre’s worst actors. Cushing himself seemed to have a love-hate relationship with the film, having described it as excessively sick. His belated embarrassment aside, Cushing is superb in this atypical role. While a natural for the character’s reserved side, among the flower-power generation Cushing is the proverbial fish-out of water, which benefits the characterization. The actor excels when transforming into a batshit looney toon, even wiping the blood of one victim on her exposed breast, before one of the most outlandish finales ever committed to celluloid. Aside from Cushing, Kate O’Mara, as the sister-in-law-to-be, gives a serviceable performance, but Lloyd fails to convince in her underwritten part. Working against flat direction, an out-of-place jazz score and an unenthusiastic cast, it’s entirely Cushing’s film. It’s no Eyes Without a Face, but after being unreleased for years, Grindhouse Pictures gives it the Criterionesque treatment it deserves, with the extreme closeups of a sweaty, bug-eyed Cushing doing the dirty, popping in a glorious 60s wash. Both the (slightly longer and more risqué) international and American versions are included, along with alternate scenes, interviews, the shooting script, audio commentary, and the misogynistic trailer, which declares: “This is not a woman’s picture. No woman will go home alone after seeing Corruption. Therefore, no woman will be admitted alone to see this super shocker.” 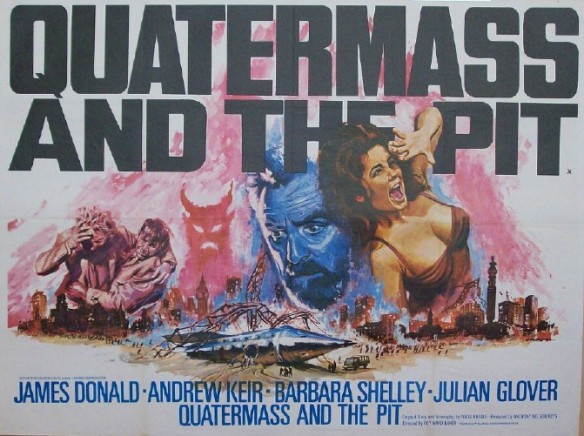 Hammer released one of their most ambitious and justifiably famous productions with Quatermass and the Pit (AKA Five Million Years To Earth). Directed by studio staple Roy Ward Baker, this is the belated third in Hammer’s trilogy[2] of Professor Quatermass stories, as written by Nigel Kneale. Originally, the Quatermass trilogy were shown as teleplays. Hammer bought the rights to Neale’s stories and produced the first two with director Val Guest (who also scripted) and Brian Donlevy in the title role. With the success of Curse of Frankenstein (1957) and The Horror of Dracula (1958), Hammer’s focus shifted to its horror canon, leaving the third and final Quatermass to sit on the proverbial back burner for eight years. The wait helped. With Kneale himself doing the screenplay adaptation, this is the best of the trilogy. Andrew Keir  takes on the title role here and is cast opposite his Dracula, Prince Of Darkness co-star Barbara Shelley. Released the same year as Kubrick’s 2001: A Space Odyssey, some touted it as an antidote to its competitor.

A London Subway excavation uncovers what is initially believed to be a WWII Nazi rocket. However, its contents include fossils of a five million year old humanoid and insect-like creatures. Authorities call in the expert advice of Professor Quatermass. Working with Dr. Roney (top-billed James Donald, known for Lust for Life and Bridge on the River Kwai) and Barbara Judd (Shelley), Quatermass concludes that the fossils are remains of Martians who once visited the earth. Theories abound, and soon Quartermass and company are at odds with officials. An outbreak of supernatural phenomenon coincides with the opening of the rocket, and escalates as the narrative unfolds. Mass hysteria, genetic mutations and demonic possession are the results of a psychic energy (in the form of a horned devil) unleashed by the excavation crew, which leads to a sacrificial fiery finale.

Keir is better suited to the role of Quatermass than was Donlevy, giving a much more authoritative and subdued interpretation. Shelley is, as usual, commendably earthy. Baker’s direction is too logical when it should have been imaginative, but he ably handles the material and keeps the pacing fluid, even through the scenes of obligatory genre gibberish. Throughout, Neale’s writing is strong in balancing characterization and dramatic action.

Roman Polanski spoofed Hammer’s horror output in the cult movie The Fearless Vampire Killers (AKA Pardon Me, But Your Teeth Are in My Neck), which co-starred himself and Sharon Tate, whom he met during the making of this film and married shortly after. Against Polanski’s wishes, distributor MGM excised twenty minutes of footage, re-dubbed numerous voices, and slapped on an animated sequence for the opening, inspiring the director to disown the film. It was mercilessly savaged upon its release but has since earned a considerable (and defensive) cult following. However, even its most impassioned fans admit that The Fearless Vampire Killers is not comparable to Polanski’s the superior works which immediately preceded (Repulsion) and followed (Rosemary’s Baby) it. Fortunately, Polanski’s edit was restored when the movie was released to home video, and it is a superior version, stamped with the director’s personality and sensibilities. 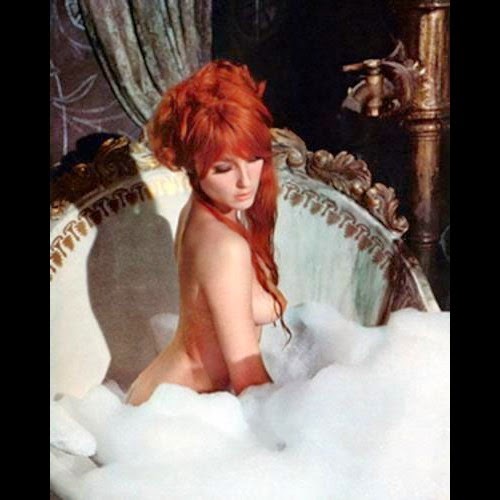 Polanski stars as Alfred, the dim-witted assistant to Professor Abronsius (Jack MacGowran). Together, they travel to Transylvania in hopes of finding an authentic vampire. At an inn, they met the owner, his wife, and daughter Sarah (Tate). That night, Count Krolock (Ferdy Mayne) takes a bite out of Sara, while she’s enjoying a Calgon bath, and whisks her away. Love-stricken Alfred wants to rescue her, which leads them to the count’s Gothic castle and a grand ball finale.

There are number of jokes that are an obvious homage to Hammer, including a gay, blond bloodsucker who is clearly patterned after David Peel from Brides of Dracula, a Jewish vampire who rolls his eyes at the obligatory cross, a hunchback, and, of course a buxom maid in a low-cut top. Shot (by Douglas Slocombe) in the Italian Alps, the film is gorgeous, and Polanski was astute in casting himself. His chemistry with MacGowran is a plus, as is the casting of Mayne, who gives his role a sleek menace. The whole cast is above par and it’s well-shot and cleverly written with idiosyncratic characterizations and slapstick interludes. Vampire Killers‘ subsequent cult status was well-earned.