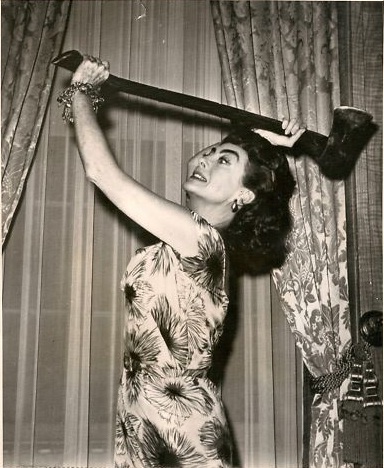 1964 was nearly as productive a year for the cinematic horror genre as 1963 was. Coming from the barrel bottom was Jerry Warren’s improvement on 1960’s La Casa del Terror, Face of The Screaming Werewolf, starring (sort of) Lon Chaney, Jr. and Yerye Beirut (who later co-starred with Boris Karloff in a string of Mexican films co-produced by Jack Hill). Chaney was probably less embarrassed (although doubtfully any less sober) working for Hammer director Don Sharp in the well-received Witchcraft. Fellow Hammer veterans Freddie Francis and Peter Cushing collaborated on the actor’s only non- Terence Fisher directed Frankenstein opus, The Evil of Frankenstein, which initially received poor reviews, but has since been reassessed in a more positive light (in some quarters). Without a star actor (or competent director) Hammer’s The Curse Of The Mummy’s Tomb (Dir. Michael Carreras) was as limp as its title character. However, the dynamic trio of Cushing, Christopher Lee, and Barbara Shelley did their best work (despite a silly-looking title creature), as usual, for Terence Fisher in The Gorgon. Lee didn’t fair as winningly in the Warren Kiefer/Luciano Ricci co-directed Castle Of The Living Dead, despite having closing scenes directed by an uncredited Michael Reeves. Lee moved from a castle to a mere crypt in Crypt Of the Vampire (directed by Camilio Mastrocinque), which was as narratively pedestrian as its title,despite undeniable atmosphere. The icon of Italian Gothic cinema Barbara Steele (and the last living of the classic horror stars) was also at home in a castle setting in Castle Of Blood (Co-Directed by Antonio Margheriti and Sergio Corbucci) and teamed again with Magheriti in The Long Hair Of Death, which we will be covering soon in a Steele triple feature. The final two Poe films from Roger Corman and Vincent Price, Masque Of The Red Death and Tomb Of Ligeia were  among their best received, although the latter features yet another ingratiatingly whiny, flowery performance from its  star. Rounding out a busy year, Price starred in The Last Man On Earth (Co-directed by Ubaldo Ramona and Sidney Salkow),  the first of several big screen adaptations of Richard Matheson’s “I am Legend,”none of which astoundingly could get right. 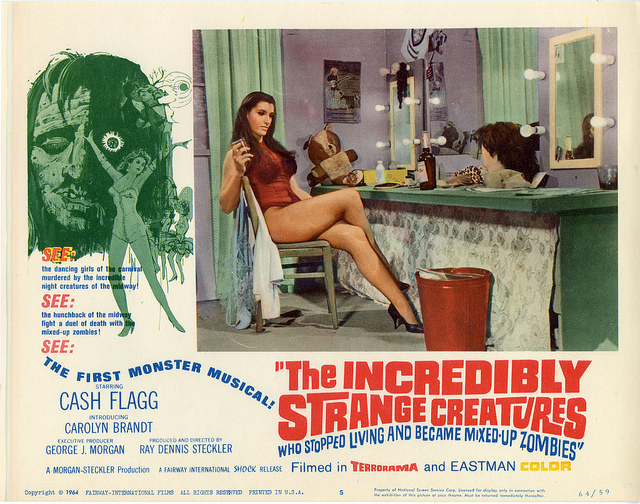 Blood and Black Lace predictably became yet another cult film from Mario Bava, but even he could not compete with the legendary Kwaidan (directed by Masaki Kobayashi), which puts most Western horror anthologies to shame. Down several notches is Del Tenney, who has an inexplicable cult reputation, but as both I Eat Your Skin and The Horrors Of Party Beach prove, that status is undeserved for such a dullard. Spiraling downward, ever downward we come to Ray Dennis Steckler’s biggest budgeted film, The Incredibly Strange Creatures Who Stopped Living And Became Mixed-Up Zombies, which is more famous for its title than the film itself. There’s a reason for that; It also commits the cardinal sin of being hopelessly dull. It doesn’t have zombies per se, but victims of the carnival fortune teller, Madame Estrella who throws acid in people’s faces, turning them into “monsters.” Despite bad sound, obnoxious acting (including Steckler himself under the pseudonym Cash Flagg) and execrable “rock and roll” numbers that have nothing to do with the plot, it’s sort of decently shot-in color- by Vilmos Zsigmond (Close Encounters Of The Third Kind-1977), but even the lensing is guilty of “incredibly slow and pointless shots of carnival rides,” which would perhaps be a better title. 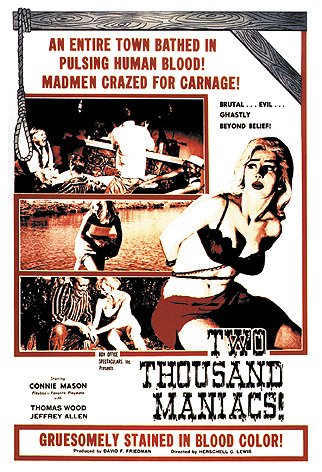 Of course, Herschell Gordon Lewis is often credited as producing the first American Gore Film, but that honor (by default) probably should be reserved for Jack Curtis who actually made The Flesh Eaters in 1962, but it was not released until 1964. Still, Lewis can alway be counted on to blatantly ignore the engraved rules of filmmaking and does so again with his musical torture porn: 2000 Maniacs, which opens with those lovable confederate flag waving racists engaging in a banjo duet. As per the norm, Lewis’ film is set around elaborately cheap splatter pieces, which come gifted with atrocious acting. The rednecks find plenty of victims, including a poor chap who gets thrown into a spiked barrel and rolled down a hill. Naturally, the Paradise Valley locals prefer to slaughter women, whom they lure into traps with fake detour signs. Cats are strangled and human arms are roasted on a spit. All the butchery is part of a belated community revenge for having lost the Civil War, but fails to answer why white trash tend to hate kitty cats. 2000 Maniacs is often counted as being among Lewis’ best work, such as it is. 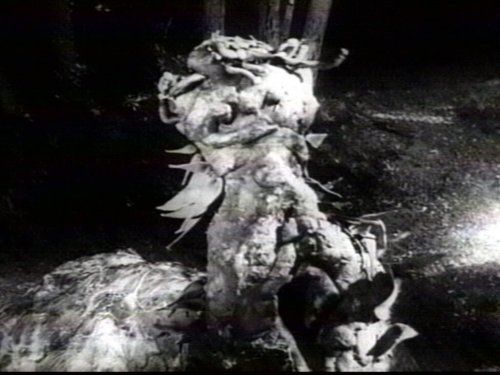 High on everyone’s list of most inept movies ever made is The Creeping Terror, directed by the notorious Art Nelson (under the alias Vic Savage ) whose only movie this was before drinking himself to death at the age of 41 in 1975. Hustler, peddler of child pornography, violent womanizer, and drug pusher are all bullet points on Nelson’s resume. True to his modus operandi, Nelson swindled his investors to produce a movie that’s so godawful, its notoriety has reached legendary status and even inspired a film about the production: The Creep Behind The Camera (Dir.  Pete Schuermann, 2014). Maddeningly, this condescending “dramatized documentary” is a mediocre affair, squandering a compelling “you can’t make this shit up,” story. Still, if all this isn’t impressive enough credentials for The Creeping Terror, add to that it was written by the one and only Robert Silliphant, who also penned The Incredibly Strange Creatures Who Stopped Living And Became Mixed-Up Zombies. The Creeping Terror can rank with Glen Or Glenda (1953), Robot Monster (1953), Mesa Of Lost Women (1953), The Beast Of Yucca Flats (1961), Monster A Go-Go(1965), Manos: The Hands Of Fate (1966), and Dracula Vs. Frankenstein(1971) as the weirdest pile of dung heaps ever committed to celluloid. Nelson cast himself in the lead role of Sheriff Martin Gordon, opposite his current off-screen underaged bride, Shannon O’ Neil as on-screen wifey Brett Gordon . After losing most of the soundtrack, Nelson (under additional alias Larry Burrell) ineptly narrates the entire film, droning endlessly about the emotional state of characters (who show no emotion), giving away plot points before they happen, and explaining what we just saw: “The Sergeant, a shaken man, returned babbling about what had happened. Realizing the full danger of the situation, decided he had only one means left to stop the monster: Grenades. Now Bradford made a drastic move. Acting on his superior authority, he forbade Caldwell to destroy the creature. The Colonel, more concerned with saving human lives than advancing science, told Bradford to go to hell.” 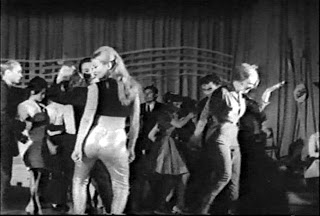 The alien monster looks something akin to an oversized shag carpet (with sewed-on strings of foam) draped over a couple of (clearly inebriated) college students crawling on their knees. This man-eating plant alien moves so slow that victims are forced to stand still, waiting for it to devour them. Once the creeping terror finally gets within striking distance, those poor unfortunate souls literally have to climb up into it.  A picnicker attempts to fight the creeping thingamajig off with a guitar. Unfortunately, the poor chap’s fighting skills are as nonexistent as his musical one and he doesn’t even get to finish his picnic basket. “The monster next appeared at Lover’s Lane,” the narrator informs us, “anyone who witnessed that catastrophe and survived would never go there again!” 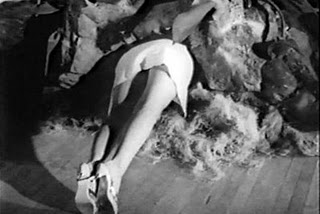 Actually, there’s a pair of monsters and one of them makes its way into a dance hall, filled with white folk who can’t dance. Inexplicably, the sight of the alien invader prompts one patron to punch another patron in the face while a woman, after getting pushed down , briefly exposes her breast, covers herself, and hides behind another actor for the rest of the scene. The scene is so hilarious, it borders on ingenious. 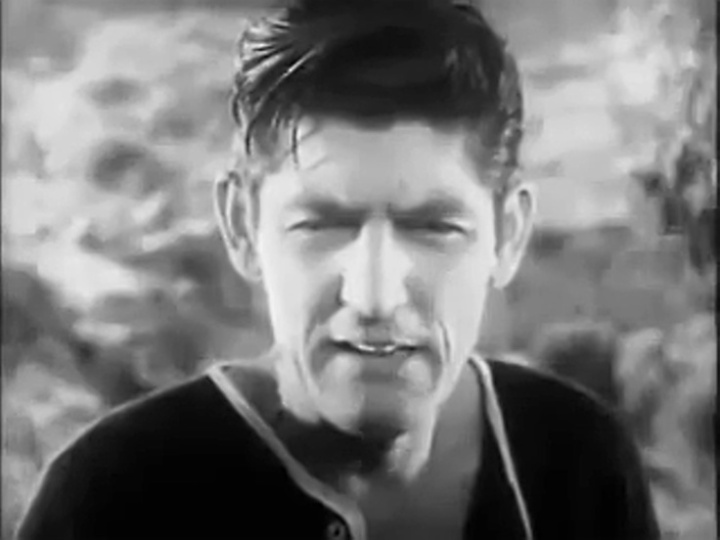 Adding to this mass of carpeted confusion is a domestic vignette. Martin and Brett are tonguing in the kitchen as poor, lonely deputy Barney sits on the couch, waiting. “Barney, you should try marriage,” says Martin, trying to teach his deputy to be a man, “it would do wonders for you.”  With the rest of the audio lost, the narrator takes over: “Barney and Martin had been bachelor buddies for years, but now that Martin was settling down to marriage, they were slowly drifting apart. Barney, naturally, was still dating all the girls in town, and he couldn’t understand why Brett and Martin didn’t pal around with him more than they did. He couldn’t comprehend that married life brought with it not only new problems and duties, but the necessary togetherness of husband and wife as well. Despite Brett’s most tactful considerations, such as inviting him over to dinner quite often, Barney was growing resentful of her, or at least she felt that he was. Since time began this change in relationships probably happened to all buddies in similar circumstances. Life has its way of making boys grow up, and with marriage, Martin’s time had come.” 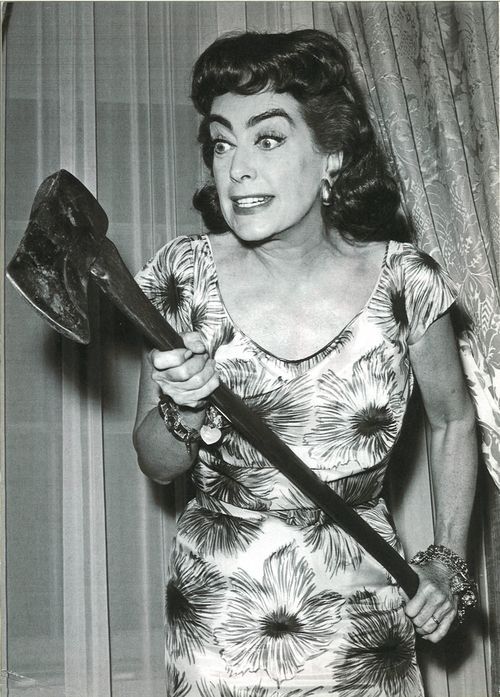 Joan Crawford, who, by this point, was more man than any man, teamed with The King of Horror Hyperbole, William Castle for Straight-Jacket, a film about Lizzie Bordon as a modern day looney tune. Castle had also made The Night Walker with another classic queen, Barbara Stanwyck earlier in the year. Despite it being Stanwyck’s last film role (she continued working television for nearly thirty more years), it cannot compete with the sheer audacity of Straight-Jacket. Penned by Robert Bloch, this is another variation of both his own Psycho (1960) and Whatever Happened To Baby Jane(1962) and Castle’s direction is comparable to the lurid cardboard axes he gave away at the premiere. However, it is Mommy Dearest herself who lifts this pulp parody with melodramatically intense acting that can only be described as uncannily brazen. George Kennedy also gives a good performance as a boorish handyman, but he really can’t compete with a sixty-year-old dame, in shoulder pads, putting the move on twenty-year-old studs.  What the hell do you have to whine about, Christina?  Maternal martyr Joan has suffered enough, goddammit!  Now, take this bitch-time for a postnatal abortion! 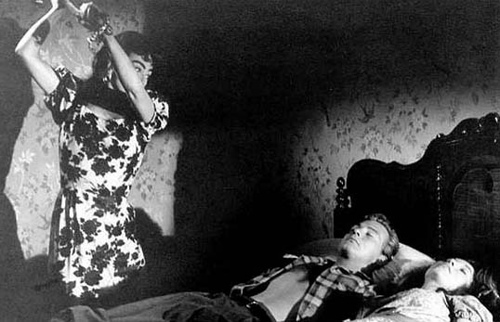 One thought on “1964 EXPLOITATION TRIPLE FEATURE: THE INCREDIBLY STRANGE CREATURES WHO STOPPED LIVING AND BECAME MIXED-UP ZOMBIES, 2000 MANIACS, AND THE CREEPING TERROR (WITH BONUS: STRAIGHT-JACKET )”