“All the scenes you will see in this film are true and are taken only from life. If often they are shocking, it is only because there are many shocking things in this world.” 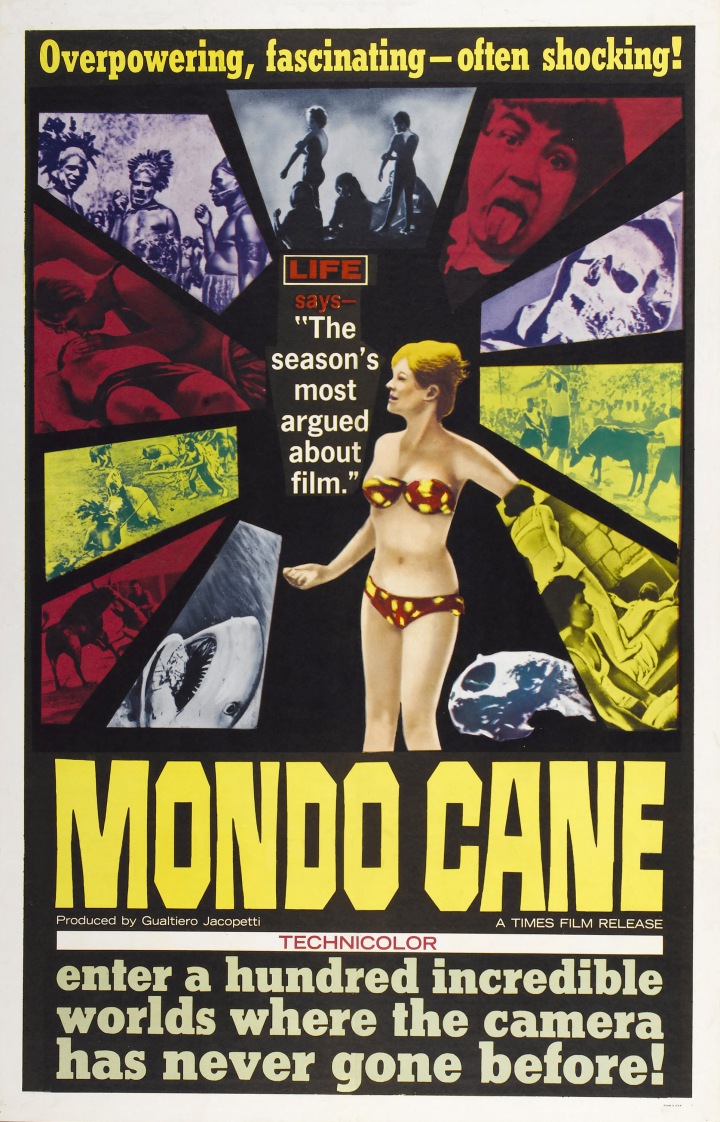 Thus, Mondo Cane not only introduced America to the mondo name and genre, it also was the first shockumentary to play in cinemas internationally, unsettling both critics and audiences who had never seen anything like it. It became a grandfather to countless pseudo-sequels and imitations, including the infamous Faces of Death, and for that reason alone Mondo Cane is of historical importance to bizarre cinema aficionados. Although dated and outdone by its successors, Mondo Cane retains its power to provoke—and that is the sole purpose of this film, which further renders it an original in every way.

Although Mondo Cane has been accused of having a xenophobic perspective, its hard to make that point when the filmmakers (Paolo Cavara, Franco Prosperi , and Guiltiero Jacopetti) consistently contrast primitive and western customs through condescending narration. It’s really a series of mostly unrelated film clips. Food is the theme most explored: from Asians eating dog, to rattle snake entrails in the marketplace, to pigs beaten to death in New Guinea, to civilized diners devouring ants in a posh restaurant.

A scene of a sea turtle slowly dying on a radioactive beach is beautifully harrowing and juxtaposed against the extended, revolting spectacle of a bull goring a man to death. While recommending the film to anyone with suicidal tendencies probably would not be a good idea, Mondo Cane is not without some humor, seen in its pet cemetery vignette, and in the contrast of savage native women being fattened to become the bride of a chieftain with Western women rolling their fat away on the floor. Very well-shot and surprisingly endowed with a sterling score (by Nino Oliviero), Mondo Cane is cinema at its most bi-polar and nihilistic. How nihilistic is it? It’s the only film I know of that will inspire the viewer to pity a man-eating shark.

Eegah often makes top ten worst movies of all time lists for a very good reason: it is one of the most wretched movies imaginable. This is another sadomasochistic endurance test from the Arch Hall Sr./ Arch Hall Jr. team, which justifiably landed a showing on Mystery Science Theater 3000. That exposure has made Eegah Hall’s most famous film, such as it is. This low budget effort was clearly trying to ride the teen monster fad that began with I Was A Teenage Werewolf (1957) and, impossible as it may seem, Eegah was actually something of a hit for its producers.

Hall Jr mantles his typical pouty, coiffed protagonist teen persona as Tom, the gas station attendant. Predictably, his performance is ingratiating fodder for bad film enthusiasts (he did get one good role in 1963’s The Sadist, which was not directed by daddy).

Tom’s girlfriend Roxy (thirty-something Marilyn Manning playing a teen) stops by the station to invite Tom to see her in her new bathing suit. Wow! Tom is excited and can’t wait to get off work. Roxy laughs and heads for the desert only to to be stopped by the caveman Eegah (Richard Kiel, best known as ‘Jaws’ in the James Bond films). Eegah is intrigued with the screaming girl—kinda like Kong took to Fay Wray and the Creature from the Black Lagoon took to Julie Adams. After escaping Eegah’s club, Roxy races home to tell Tom and Dad. Tom’s skeptical, but Dad says: “Hey, it’s possible cuz there’s giants in da bible” (!?!) Dad himself gets abducted by Eegah and taken to a cave. OK, now that we have that out of the way, we can be treated to two songs by Hall: “Valerie” and “Vicky.”  Who is Valerie? Who is Vicky? Why doesn’t Tom sing a song about Roxy? Where did Eegah come from? How did he wind up in 1962? These are questions the answers to which the world may never know.

Roxy becomes the next kidnap victim of Eegah and gets reunited with daddy in the cave. See Roxy shave her dad. See Eegah perplexed. See Tom hop in his dune buggy. See Tom drive in the desert. See Roxy shave Eegah. See Tom hopping mad cuz the caveman kidnapped his gal pal and her dad. See Eegah take things too far with Roxy. See Roxy flash some shoulder. See Roxy kinda liking the manhandling. See Dad and Tom save Roxy, whether she wants saving or not. See Eegah crash a swinging pool party. No, the airplanes didn’t get him, it was beauty killed the beast. Grab a hanky to go with those nachos.

Next up, we get to see Ray Dennis Steckler try his hand at directing Arch inWild Guitar (Daddy Hall wrote and produced). Steckler acts in this as well, playing the part of the henchman Steak, so named because… he only eats steak! Steckler’s acting is as compellingly atrocious as his directing. He’s not really very threatening, and neither is Hall, who plays a rock and roller with a cycle. A Z-grade rip off of King Creole (1958), Hall’s swinging pelvis is tame enough to make Pat Boone look like an authentic rebel. His thespian skills are almost as incompetent. Coupled with Steckler and Hall Sr. lording over the poor kid, who never wanted a career in show business anyway, the result has potential to be a hoot—if you can actually stay awake through it. 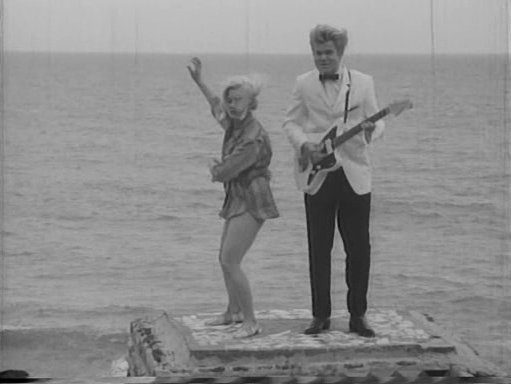