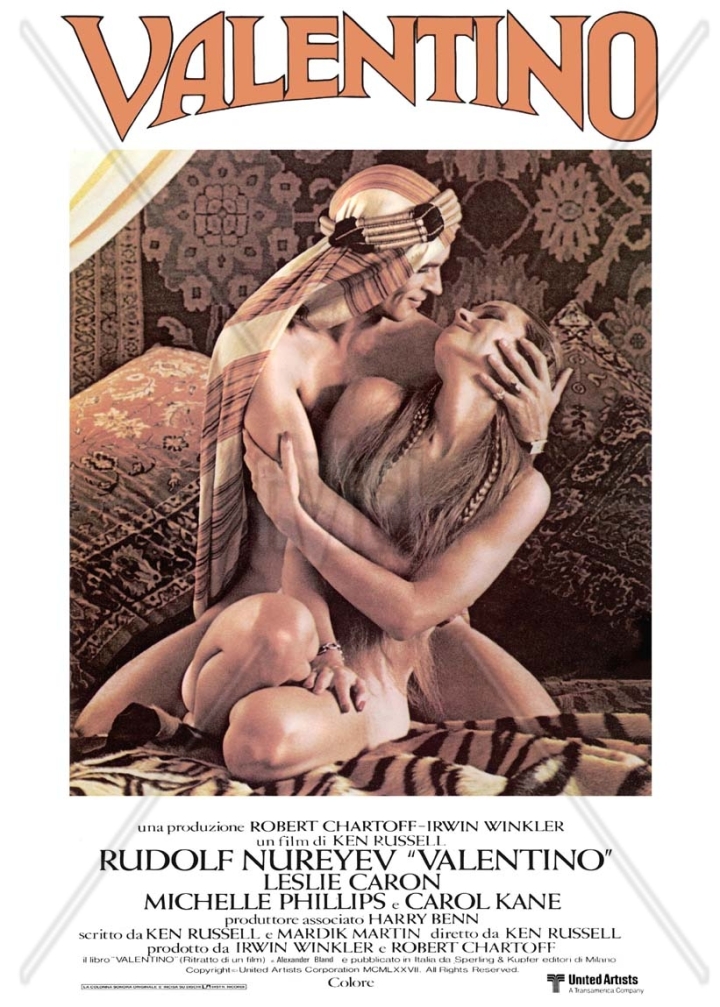 Of all the star-worshiping that went on during silent cinema, it is perhaps the obsession with Rudolph Valentino that is most mystifying today. When he died prematurely, at the age of 31, numerous fans were so distraught as to commit suicide. His funeral was besieged by thousands, and a legend was born when a mysterious lady in black began annually placing funeral wreaths on his tomb for decades to come. Valentino had such an impact on pop culture that everyone from Bela Lugosi to Elvis Presley were influenced by him. 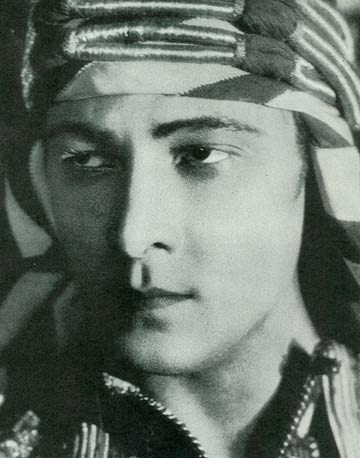 Yet today, there are relatively few Valentino film festivals or revivals, and when his films are seen (rarely), they will inevitably prove disappointments. Valentino never made a great film. In fact, most of them are dreadful. (In his defense, he didn’t make very many). Of course, someone will inevitably make the tiresome 21st century claim that this is true of most movies from the silent era, despite the fact that there are plenty of films from that period that have good writing, performances, direction and hold up even better than many films of the Fifties and later. We could attempt to produce examples of stellar acting in lesser films, however, this does not work with Valentino. Although his charisma scorches, his acting is extreme in its use of silent film cliches, mechanical and bizarrely exaggerated to the degree that it elicits amusement today as opposed to the near orgasmic reaction of his contemporaneous fans. Undeniably eroticized, his screen persona was also amoral; he was a rapist. Otherworldly, he doesn’t even seem human, which is perhaps why he is primarily known by name alone. It’s doubtful if many today would even recognize his image.

Sometimes, the reason for stardom is more for a colorful biography than an actual body of work (e.g. Tallulah Bankhead), but this isn’t necessarily the case with Valentino. His biographers contradict each other with bullet point details, which is to be expected since the star’s press kit was largely fiction. What we do know is that he was born in Italy and immigrated to the United States in 1913 looking for employment. Some reports have him working as a male prostitute, but that is widely disputed as well. He bussed tables and briefly found work as a taxi driver, which is how he met actor Norman Kerry, who convinced Valentino to try a career in the new cinema business. Valentino became an “overnight”star with 1921’s Four Horsemen of the Apocalypse (although he had been doing small parts as exotic heavies in film for seven years), became a superstar with The Sheik later that same year, and became part of Hollywood folklore by dying shortly after attending the premier of The Son of the Sheik  (possibly his best film) in 1926. Undoubtedly, an early death was Valentino’s best career move, cementing his iconic status for at least a few decades. James Dean, who was nowhere near as interesting as Marlon Brando or Montgomery Clift (he blatantly aped  both of his idols’ acting styles), took Valentino’s route to fame by premature death. Dean’s 1950s mythology seems to still resonate, at least in terms of merchandising revenue, which is odd—at least Valentino had originality. Valentino’s biggest rival, the forgotten John Gilbert, had the misfortune to live until 1936, well into the sound era, which destroyed him and his reputation. Likewise, with Valentino’s histrionic acting and from the evidence of a few sound recordings which reveal an impenetrable accent, it is almost certain that his stardom also would not have survived sound. 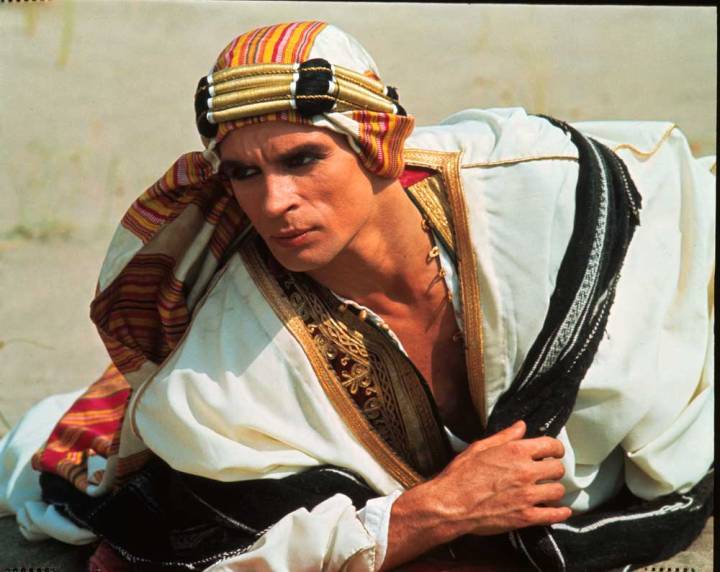 There was an early scandal with an heiress whose husband had Valentino arrested for “alienating” his wife’s affections, but the evidence was flimsy and charges thrown out. Valentino himself was married twice. His first wife was a lesbian and the marriage never consummated. With his second wife (whom he married twice) he was reportedly a henpecked but overly-jealous husband, at least until he divorced her again. Thus, his off-screen life was sharply at odds with his screen persona, although Valentino did seem to possess a sense of self-depreciating wit about all of it.

A few decades after his death, biographers began claiming that Valentino was gay. In his notorious “ Hollywood Babylon”

Ken Russell created a reputation for making obsessive, idiosyncratic biopics of artistic geniuses ( Gustav Mahler, Franz Liszt, Pyotr Tchaikovsky, Henri Gaudier-Brzeska). Of course, Russell being Russell, he delights in arguing and puncturing that genius moniker. Still, his 1977 Valentino was a bit of a curiosity (Russell himself called the film his biggest career mistake). By this time, Valentino’s reputation had fallen, and almost no one was counting him among the acting greats. Actually, few ever did. Even period critics predominantly dismissed his thespian skills.  Russell focuses on a life contrasted with the mythological image, on the pedestrian genius of celebrity adulation, on the spirit of the 1920s, and on a (possibly) fictionalized fight, all predictably filtered through his sensibility of baroque excess. The resulting film is a curiosity—neither a complete success nor failure, but one that revels in the director’s penchant for bad taste, which may be apt in this case.

Russell (loosely) bases his film on a novel, as opposed to actual biography. For the starring role, the director made an odd casting choice in dancer Rudolph Nureyev, who looks nothing like Valentino and is no actor. It’s a gamble that almost pays off with Nureyev’s winning congeniality.

Valentino opens on the frenzy following the star’s death. Female fans form a mindless, grief-stricken mob crashing through the window of the funeral home where Rudolph Valentino lies in state. It is with this mob that Russell errs badly, using it as a broad misogynistic stroke to largely paint the entire female cast as witless, navel-gazing characters. That choice decimates a film with considerable potential.

Valentino’s “story” (actually, Russell’s fantasy, which is to be expected) is told in flashback via Hollywood screenwriter and producer June Mathis (Felicity Kendal) who discovered the actor (she cast him in Four Horsemen of the Apocalypse).

Following Valentino’s humble beginnings in Italy and New York, Russell throws in a rumble with the mob, which sends him packing to L.A. The vignette is highly fictionalized and finds the director out of his stylistic element. Valentino then makes his living dancing in nightclubs (naturally, with Nureyev in the starring role) until another fight, this time with Fatty Arbuckle (William Hootkins in a distractingly bad performance), leads him into the arms of his first wife Jean (Carol Kane). Bad performance aside, the encounter with Arbuckle is awash in Russell’s delightful deformities.

Both Kane and Kendal are good in limited roles, as is Leslie Caron in her portrayal of actress Alla Nazimova. Unfortunately, Russell, in reckless and two-dimensional direction, completely misses (or ignores) Nazimova’s mercurial charisma and reduces her to a publicity-seeking succubus. Still, Caron’s humorous personality is piercing, and the scene in which she melodramatically faints over Valentino’s flowered coffin is visually orgasmic.

Unlike Caron, Michelle Phillips aids and abets Russell in her dreadful portrayal of Valentino’s second wife, Natacha Rambova, who was a brilliant Art Nouveau designer. Russell and Phillips paint her in offensively shrill camp colors as a narcissistic cartoon.

Still, neither Russell nor Valentino can be so summarily dismissed. There is much to recommend it, including its primary theme of an immigrant star fatally at odds with American homophobia and ethnocentricity. Although Russell attempts to establish Valentino’s homosexuality when casting the gay Nureyev dancing with Nijinsky (Anthony Dowell), we’re never entirely convinced. We could blame Nureyev for failing to evoke Valentino (as many critics did), but that’s a fallacious distraction. Nureyev owns his performance and almost alone validates the film. Rather, the fault lies with Russell (who also co-wrote), and that could be because his source material lacks credentials. The chemistry between star and director is found in the recreation of the famous tango scene from Four Horsemen of the Apocalypse. Nureyev’s choreography coupled with Steve Cooper’s set design is lusciously filmed, making one wish Russell and Nureyev could have worked together more often. Following this is a harrowing, almost phantasmagoric Felliniesque scene in which the effeminate Valentino, jailed for bigamy, is sadistically taunted by a brute of guard and drunken cellmates and made to urinate on himself. This is the first of a pair of bookend scenes. The second is a fight between Valentino and a professional boxer, which takes place after a dull, macho journalist labeled the star a “pink powder puff.” The fight actually took place, and the boxer was chosen to be the aged writer’s “champion,” in hopes of besting Valentino. It didn’t happen. According to the one biography of the actor that I have read, the fight ended with Valentino knocking his opponent out rather quickly. He wins in Russell’s version as well, but it’s a hard won fight, which in the end killed Valentino, rupturing his ulcer. According to the biography that I am familiar with[1], Valentino died of peritonitis, which he developed from surgery on a perforated ulcer, unconnected to the fight. Russell’s decision, whether fact or fiction, is to make a martyr of Valentino, and it’s consistent with a theme that both edifies its subject and condemns the judgmental hypocrisy of American culture and its erroneous mores.

Its flaws aside, Valentino looks sumptuous in its recent Blu-ray release with Russell’s various shades of magenta popping and lingering long after the film. The gorgeous costumes and detailed set pieces with elaborate Deco motifs are also highlighted well and the film has never looked better.

Among the extras are a poignant reminiscence with a chain-smoking Orson Welles waxing nostalgic about the Valentino mystique, audio commentary from historian Tim Lucas, trailers from both Valentino and Russell films, and footage of Valentino’s funeral procession, which gives a good indication of the cultural impact Valentino had on his era.

If Russell’s daring film had been made fifteen years earlier, when the Valentino legend was still wet, it probably would have been a hit. Instead, it was one of many box office flops that eventually put an end to the director’s financial backing. Since then it has predictably earned a cult following, even if it is not the best place to start with Russell’s oeuvre.