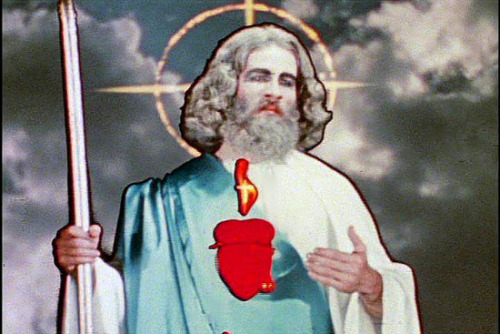 During one of my incognito Sacred Heart Catholic Church field trips with my Aunt Greta, visiting from the Arizona desert, I received a mild scolding—albeit not from immediate family, who would have flipped out had they known my father’s sister had smuggled me into one of those Catholic churches. Rather, it was from Greta herself, who corrected my venial sin: in being transfixed by the statues of the Infant of Prague (a toddler Jesus in drag), Our Lady of Sorrows (Mother Mary with seven knives jabbed into her chest), and Teresa of Avila (she of Lorenzo Bernini’s orgasmic ecstasy), I made the mistake of saying: “It’s cool that your church has such weird imagery, worships women, and you don’t have to worship Jesus.” Greta very quickly and sternly pointed out to me: “We do worship Jesus, and we don’t worship Mary or Teresa. We venerate them.” In hindsight, and putting aside that I was in my teens that was probably the first time I became vaguely conscious of a latent (although denied by some) connection between feminism and blue-collar Catholic Surrealism. 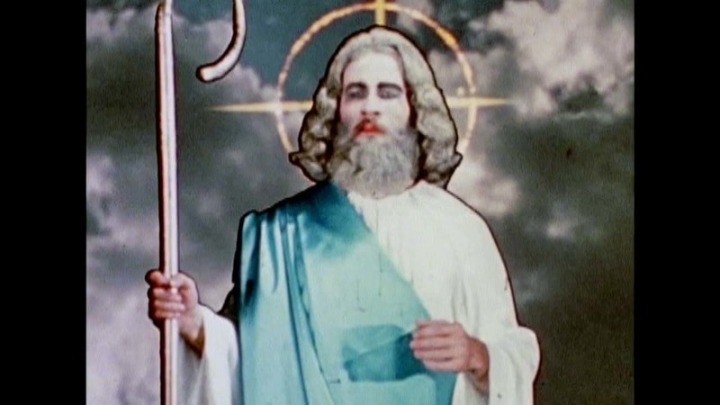 The films of Daina Krumins have these qualities, and more. As with most Krumins followers, I was introduced to her via The Divine Miracle (1972). I can’t recall where I first saw it, but it was in the late seventies, and Aunt Greta’s parish icons immediately called to mind Krumins’s film. Another weird image that I had cemented at the time, mixing my mythologies, was from a TV documentary about the suicide of George “Adventures of Superman” Reeves, in which the narrator described the late actor’s devoutly Catholic mother going to the crime scene and placing holy cards of saints on all the blood stains and bullet holes in the room (the narration was accompanied by eccentric flashing images of devotional postcards). The reason I reference the latter is that there’s something of a holy cards-on-bloodstains texture to Krumins’ work. 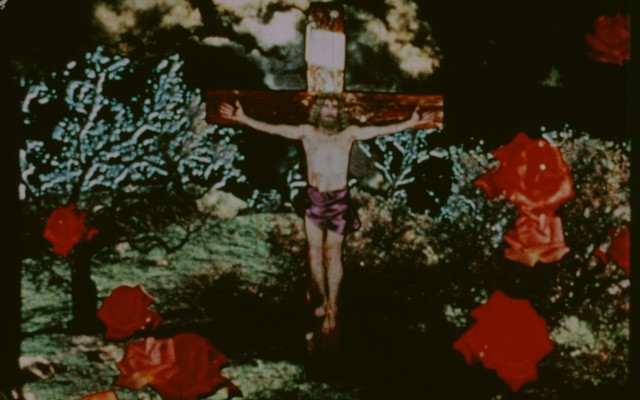 Krumins was born in 1947 in a Munich refugee camp. Her family immigrated to the U.S.A. Like her mother, Krumins suffers from Asperger’s syndrome. Fortunately, her father, who was an accomplished photographer, and her uncle, a Latvian painter, encouraged her early creative eccentricities, which included collecting metal shavings, wax teeth, snakes in formaldehyde, jellyfish, and crabs. Ignoring her teachers’ advice to be more social and pursue a normal life, Krumins received her BFA at the NYU Film School, followed by an MFA from the California Institute of the Arts, and found employment as a rotoscoper with Lookout Mountain Films. Images from her art and film can be viewed on the filmmaker’s website). 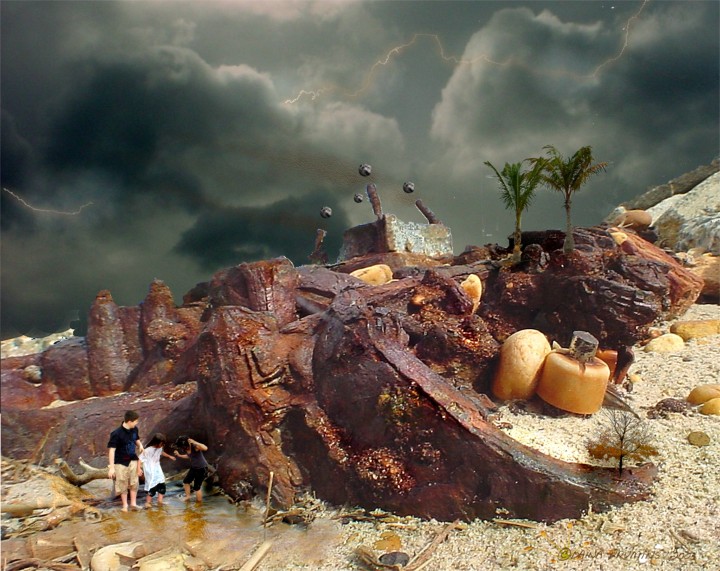 Krumins is a New Jersey resident and has been described as a “homegrown Surrealist.” That description suggests something coming from the earth, which is apt. Krumins refers to her film, photographs, woodwork, and sculpture as preoccupations with textures. To date, she has completed a total of four  films,spending anywhere from nine to seventeen years working on each. 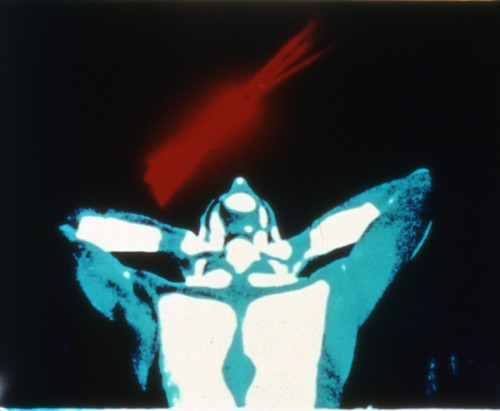 The Divine Miracle, which runs approximately six minutes, was the film that made her reputation, winning a total of thirteen awards including first place at the Ann Arbor Film Festival and the Silver Hugo Award at the Chicago International Film Festival. The Divine Miraclewas shown on PBS and frequently made the rounds of art museums. 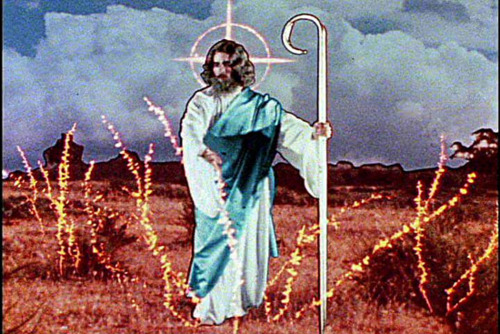 In some quarters, The Divine Miracle, with its embrace of surreal kitsch, was erroneously assessed as a parody of Christianity. Krumins, raised Lutheran, disagrees, saying that she believed in all the fantasy world miracles from Sunday school. 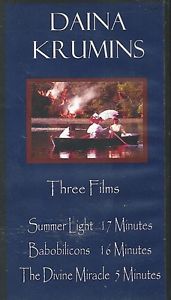 For those accustomed to youthful portrayals of Christ (i.e. Jeffrey “I was a teenage Jesus” Hunter in 1961’s King of Kings) John Tyler’s stiff, gray-bearded Christ might prove disconcerting, but the portrayal is in step with 1927’s silent King of Kings, which featured H.B. Warner in his mid-fifties, with the charisma of a cardboard-cutout messiah. It’s also in step with the late, overtly religious work of Salvador Dali, which many critics dismiss as kitsch. Actually, apart from his work in the medium of film and still photography, Dalí’s late, semi-orthodox work is his best, its kitsch quality rendering it even more authentically surreal. Krumins, being a more substantial Surrealist than Dali, takes that surreal quality further, crowning her middle-aged savior with a Gustav Klimt-like golden halo and literally outlining him with bold, thick, opaque lines, as if he just stepped out of a hole-in-the-wall Catholic shop coloring book. 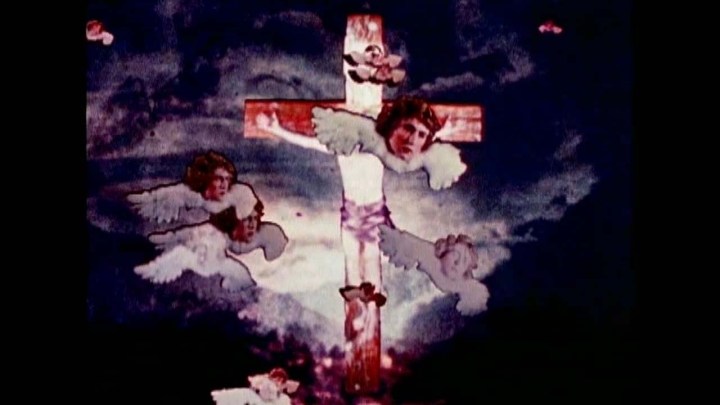 Tyler’s Jesus has the most bizarre sycophant disciples ever committed to celluloid: mop-topped bodiless cherubs (just a head and wings, all played by Scott Martin) who encircle their master like horseflies buzzing round a field cow (which, come to think of it, is sacrificially befitting). Jesus’ martyrdom on the cross is followed by an ascension, which looks like a Georges Melies’ Trip To The Moon (1902). In roughly six minutes, Krumins says, and gets right, what other filmmakers have failed to accomplish in three-plus hours. Her film is honest about the idiosyncratic tenets of Christian mythology and, ironically enough, this most Catholic of all films was made by an American Protestant.

The Divine Miracle served as Krumins masters’s thesis, took two years to produce, and was made entirely in a studio utilizing her skills in rotoscoping and optical printing. It is a Last Supper smorgasbord of pre-video age film techniques, including hand-painted fire and ice colors straight off an El Greco canvas or out of an Our Lady Of Guadalupe mass. Rhys Chatham’s expressive score perfectly compliments the visuals.

A decade passed before Krumins’ presented her next film, Babobilicons (1982), although in the interim she did land a job painting auras around Obi-Wan Kenobi’s head for The Empire Strikes Back. Like its predecessor, Babobilicon is a painstaking labor of fierce originality.

Even after seeing The Divine Miracle, one is hopelessly unprepared for Babobilicons. Like the best work of Charley Bowers, Babobiliconsis a time-lapsed mix of live-action photography and animation. Even Bowers, with his Model T Ford hatching from eggs, seems comparatively bourgeoisie and tame. Babobilicons began its life with Krumins growing slime molds from Quaker Oats and importing 10,000 ladybugs (from a pest control company) into her home. No, I’m not kidding.

Twice the length of The Divine Miracle, Babobiliconsis a hyper-erotic tour-de-force of ominously militant coffee pots with lobster claws dauntlessly marching through Krumins’s basement amidst flowering, phallic mushrooms (filmed by her mother), creepy crawly bugs, a feminine messiah walking on water, and ceramic fish relentlessly jumping through ethereal waves. Smartly shunning any kind of logic, Krumins’ scares the hell out of us without explaining what we fear, where it came from, or what its purpose is. Krumins worked on Babobilicons for 9 years to overwhelm and drain us for 13 minutes with “aspie” humor, inundating us with wall sockets and paint peeling (playing off all those jokes about experimental film).

After the birth of her neurotypical son, Krumins spent 17 years on her next film, Summer Light (2001). In her statement about the 18-minute film, described as a “Victorian Fantasy” (with headless antlers jumping out of lakes and a pyromaniac toddler), Krumins writes:

“My main preoccupation as an artist, and to some extent as a person, has always been based on texture. Texture is such a small consideration for most people, to say that my visual world-view is based on a relationship with textures is almost like saying that the most important thing about a piece of writing is the number of punctuation marks. It seems silly.

And yet, I believe it as a valid a way of looking at the world as any other way. But I wonder why repetitions have so much meaning for me. One possibility that has occurred to me is that perhaps my mind is more primitive in some ways, and that my obsessions and fixations have something to do with evolution. How to explain? OK. If a bird flies between two blueberry bushes and one bush has lots of berries and one has only a few berries, how does it know where to go? The same with a monkey looking at banana trees, or perhaps even a billionaire considering his various bank accounts.

Summer Light comes from my texture-driven, non-neurotypical way of finding delight and meaning. It’s not verbal meaning, All I say in words is that it does, in fact, have meaning. In a way, it is my world.”

Summer Light made the festival rounds, winning the Silver Award at the Big Muddy Film Festival.

Another decade passed. Krumins explained her period of inactivity as “creative time rooted in blah time.” 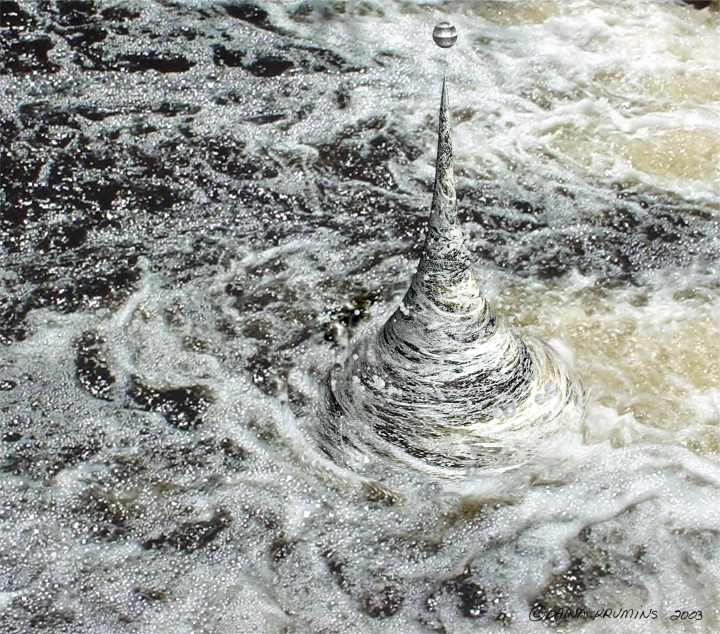 In 2011, she fulfilled her ambition to make a feature crime film with Glass. It is available to view, in 8 parts, on her YouTube channel. Krumins describes it as:

My personal premise was that for me, the actually linear plot line for anything is kind of boring. I really don’t care who done it or whatever. Also, Alfred Hitchcock invented something called a McGuffin and Glass is one huge McGuffin. It has a story line that gets increasing illogical and goes nowhere, just as a McGuffin should.

Like many artists, I don’t know why I do what I do. From the time I first started making films, I’ve wanted to make a feature film but there had been insurmountable problems. I could not afford to make a feature-length film in 16mm, much less in 35mm. Also, as a woman, and not only a woman, but a woman with Asperger’s, I could not network my way into any sort of social position where I could convince other people to finance a feature film. I read Uta Frith’s Autism and Asperger’s Syndrome, and began to understand that I could only make a film from my own point of view and that most people would not find the film acceptable.

But then . . . digital filmmaking arrived and, as we all know, it is practically FREE. The people who helped me make the film knew about my Asperger’s, particularly from a book I helped write called Women From Another Planet? The actors were especially helpful; while I was setting up the lights and camera, they would sit down and rewrite the dialog. They understood that although my savant-level visual ability can be trusted, my ability to write dialog is dubious at best. Also they were not put off by my eccentricity and if I said something peculiar they would just let it slide. Wonderful!

The Divine Miracle, Babobilicons, and Summer Light can be purchased on a single DVD through Canyon Cinema or by emailing Krumins (email available on her website), but she does ask interested parties to write “ASPIE CREATIVITY” in the subject line so she does not mistake it for spam.

Glass is also available for purchase on a separate DVD from Canyon Cinema.