Barry Mahon is another 366 weird movie saint awaiting canonization.  His directing breakthrough was with the Errol Flynn fiasco Cuban Rebel Girls (1959), which is essential bad film viewing. For another eleven years, Mahon made one godawful film after another until someone wised up and quit funding this hack (he died in 1999, never making another film after 1970). He was something of a Zach Snyder for his time, although no one was stupid enough to give Mahon millions of dollars. 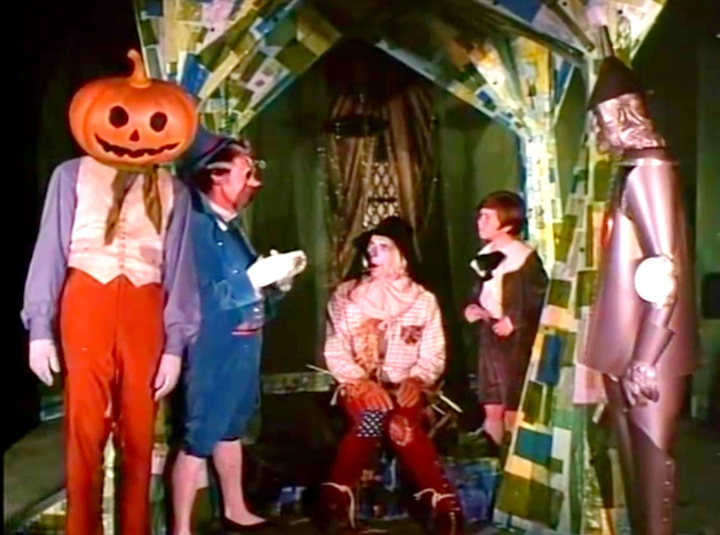 Most of Mahon’s films were  Z-grade nudies (International Smorgas-Broad, The Adventures of Busty Brown, Fanny Hill Meets Dr. Erotico), but there are a few execrable standouts, with The Wonderful Land Of Oz (1969) and Thumbellina (bundled into 1972’s certified weird Santa And The Ice Cream Bunny) being among the most memorable.

Literally looking like garage filmmaking, The Wonderful Land of Oz opens with a warbled song and introduces us to hanging sheets, Glinda (still annoying, regardless of who plays her), a papier-mâché purple cow with blinking eyes, and badly costumed characters, including the Wogglebug: a man with antenna, bug eyes, and a walrus mustache. 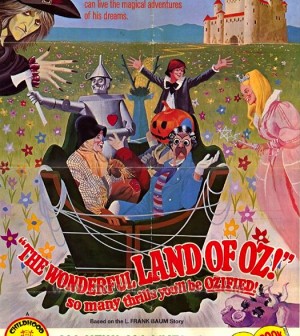 The Tin Man and Scarecrow are obligatory characters, but Pumpkinhead has replaced the Cowardly Lion. Someone forgot to give him a microphone under that oversized head because we can barely hear him. It hardy matters, because he seems to be struggling with his lines. His fellow cast members, who frequently talk to themselves, are no help, mumbling their cues as they move lethargically, seemingly having overdosed on tranquilizers.

Tip (Channy Mahon, Barry’s rugrat) replaces Dorothy. Tip is loaded with dull angst over his evil stepmother, the Wicked Witch Mombi ( played by someone named Ziska). She makes the boy go to bed on time, and when he attempts to rebel against such parental sadism, she vows to turn him into a statue. Comatose slapstick and phlegmatic sing-a-longs are visually accompanied by a cardboard fence (which we keep expecting to fall over) and half a gallon of straw on the soundstage floor to represent a stable. Tip flees with the aid of Pumpkinhead, who is brought to sort-of life via magic powder. The two run afoul of an obnoxious high school band (is there any other kind?) headed by teenaged brat General Jinjur. Tip and Pumpkinhead manage to make it to Emerald City (it’s a short walk around the garage), but rather than encountering a wizard behind the curtain, Tip gets magically transformed into a girl (he doesn’t put up much of protest) by Glinda, who confirms what we have always known: she is more Dolores Umbridge (the real villain of Harry Potter) than goodwitch (although she is called a fairy here). That sickening, bloated pink dress and K-Mart tiara fools no one. After that suburban porn reject Glinda forces a sex change on poor Tip, she does an exit stage left, cruelly depriving us yet again of the chance to see her die a horrible death.

The Wonderful Land of Oz is mind-numbing in its wretchedness. To think that kiddie cinema patrons actually had to shell out a dime to sit through this smacks of a prime example of yesteryear’s cruelties. 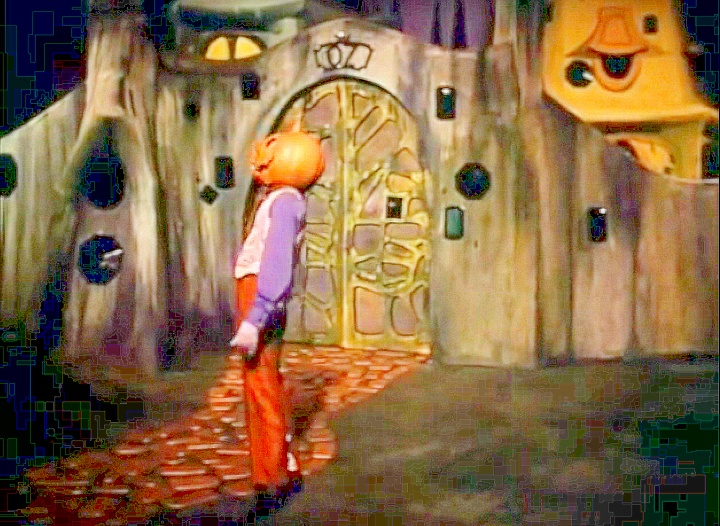 The Beast That Killed Women (1965) features a guy in a blue rubber gorilla suit terrorizing women in a nudist colony, which means lots of nudity, some bad 60s music, even worse dancing, and one actual kill. I just saved you an hour.