Forget Batman, Pee-wee is back.

Exclusively for Netflix, Pee-wee Herman (Paul Reubens) returns with his first feature in 28 years. Pee-wee’s Big Holiday (2016) could be (and has been in some quarters) dismissed as “Pee-wee’s Next Big Adventure.” Is it as original as that Tim Burton-helmed Pee-wee’s Big Adventure (1985)? No, but it’s a welcome return. Actually, Pee-wee has weathered pop culture better than Burton, who lost his mojo in the 90s.

There are a few pleasant surprises here, such as not-so-subtle homage to Russ Meyer‘s Faster, Pussycat! Kill! Kill! (1965). Still, mostly Reubens plays it safe, giving us exactly what we expect of him.

Pee-wee Herman comes from a very small cinematic tradition of the “creepy man-child,” which Harry Langdon introduced in the silent era. Primarily under the direction of Harry Edwards and Frank Capra, Langdon initially kept his character’s more disturbingly childlike qualities in check. However, eager to expand that characterization, Langdon eventually let loose—which quickly destroyed his career, even if the results were artistically satisfying. 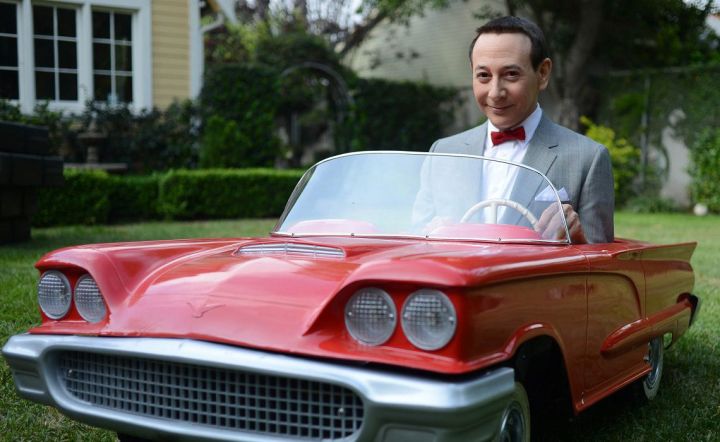 Stan Laurel, very much influenced by Langdon, learned from his mentor’s populist misstep and kept the baby-face half of Laurel and Hardy forever innocent. Jacques Tati, also influenced by Langdon, had more freedom with a European audience. In 1979, Steve Martin introduced his take on the naughty child. However, after a few experiments that unfortunately failed at the American box office, Martin took the safer route of growing up, which eventually rendered his body of work both disappointing and inconsequential. Reuben’s Pee-wee Herman character first emerged around the same time as Martin’s. After Burton and Rubens produced the masterpiece Pee-wee’s Big Adevnture, 1988’s Big Top Pee Wee  was a disaster. This flop hardly mattered due to Reuben’s award winning “Pee-wee’s Playhouse” TV show (which earned 15 Emmys in 5 years). Reubens was undoubtedly the most original small screen personality since Ernie Kovacs.

Of course, we all know about Pee-wee’s rapid rise and fall, and television has been all the more bankrupt since its departure in 1991. That is not to say there is not good or even imaginative TV programming, but there is little with the aesthetic quality of Reubens[1].

At 63 years old, Reubens had his face digitally enhanced for Big Holiday, in order to retain that child-like mask (Mary Pickford did not have 21st century technology and had to give up on her little girl lost act at the age of 34). Still, although treading narrative familiar ground, Reubens retains the character’s edge in this belated return. There is even a latent same-sex attraction undercurrent between Pee-wee and Joe Manganiello (it’s so latent, kids will not be privy to it).

Pee-Wee is still very much a fixture in a surreal suburbia—as usual, he is the only one who realizes just how off-kilter the ‘burbs are—when he meets Joe. Sharing a love for root beer barrel candy, Joe and Pee-wee hit it off. Joe, soon to have a birthday party in New York, invites Pee-wee, encouraging the suburban Peter Pan to step outside of his G.O.P. mecca of Fairville and “live a little.” Reubens is savvy enough to poke fun of the retreaded plot: “I don’t want to go anywhere or try anything new.” He could be Fairville’s poster child for Donald Trump’s desire to “Make ‘Murica Grate Again,”  (AKA, let’s return to the oppressive past), except that Pee-wee does have a tad bit of the eternal bad boy Reubens under his skin. Of course Pee-wee heads to the Big Apple, embarking on his next big adventure as if 1985 was just a few days ago. 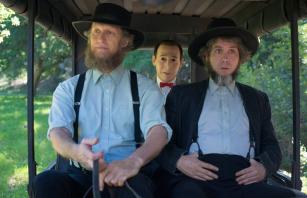 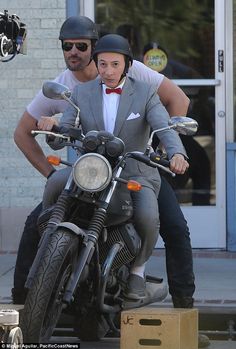 Between a hexagon of biker outlaw udders (Alia Shawkat, as one of the trio, shines and has genuine chemistry with her co-star) and nine man-meat craving farm girls who have used a tad too much butter on the grits, Pee-wee makes it clear that he is not interested in the fairer sex “that way.” With all those pheromones, Pee-wee runs for New York cover and Joe’s ripped, saving arms. Of course, there are some mildly weird diversions along the way that never get quite phantasmagorical enough. A traveling snake oil salesman who literally takes hitchhiking Pee-Wee to a snake farm, a Chitty Chitty Bang Bang flying car (occupied by Diane Sallinger[2]), an Amish village of balloon deflators ( an amusingly extended gag), and an odd musical number all add up to subdued eccentricity, but never on the natural scales of David Lynch or the late Tim Burton.

Still, Pee-wee’s Big Holiday is a charmer that may lead to Reuben’s reviving the character and taking him into more innovative terrain.