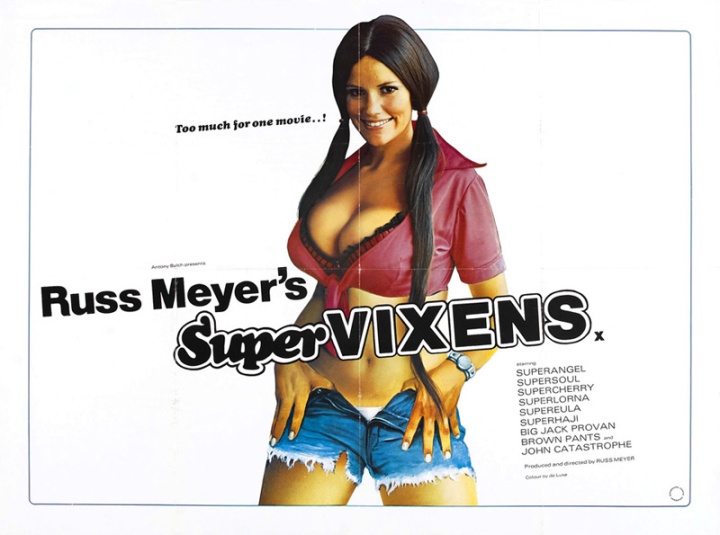 Russ Meyer had seemingly put low budget independent film permanently behind him when he made Beyond the Valley of the Dolls(1970, co-written with (Roger Ebert) and The Seven Minutes (1971) for super-studio 20th Century Fox. The first film made an unprecedented nine million dollars, but the latter was a commercial and critical failure. The axiom “you are only as big as your last film” held true, and Meyer was back on an independent path with the Caribbean-filmed period drama Black Snake (1973). Unfortunately, that was also a commercial failure. Some advocated it as an attempted change-of-pace for Meyer, but many felt the director had lost his footing. 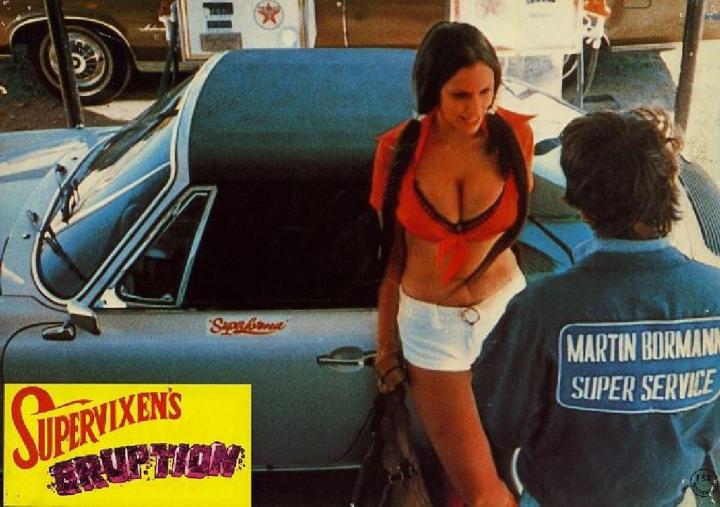 Supervixens (1975) marked a return to Meyer’s zanier sexploitation style. It also finds him trying to catch up with his earlier self and with the indie school he influenced, which had already surpassed Meyer in its sex and violence quotas. Fortunately, he succeeded, and Supervixens‘ unexpected financial success (especially for an independent film) paved a path for the larger budgets of Up!(1976) and Beneath the Valley of the Ultra-Vixens(1979; his second and final collaboration with Ebert as co-writer). 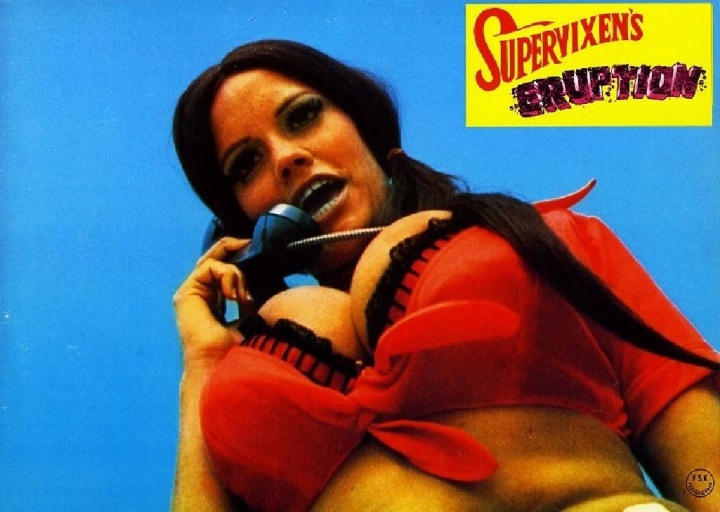 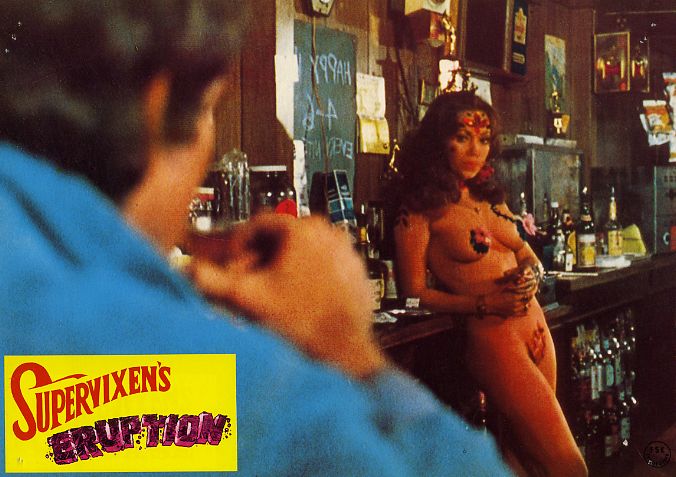 Clint’s drowns his sorrows with bartender Super Haji (Haji). While the cat’s away, Super Angel plays with not-so-super Harry. Alas, Harry is no Dirk Diggler, and after she mocks his libido, he sadistically beats, stabs, stomps, strangles, drowns and electrocutes her in the most violent scene from any Meyer film (it is disconcertingly brutal, even by contemporary standards), before burning down the house for real. 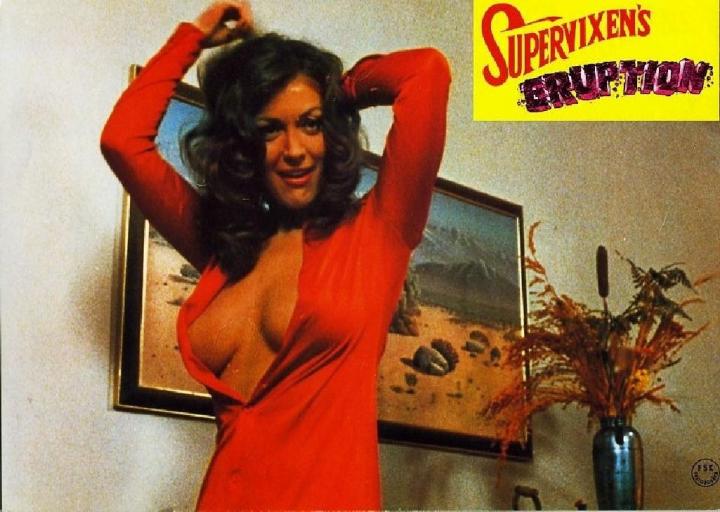 After turning down Haji’s “come hither” advances, Clint’s alibi goes bonkers, making him the most likely suspect in his wife’s murder. Clint hits the road in a Chuck Jones-styled desert rendition of a Homerian odyssey. He hitches a ride with swinging couple Cal (John Lazar) and Super Cherry (Colleen Brennan). Poor unfortunate soul Clint is a magnet to super-sized udders, and after turning down ménage a trois action with the duo, he gets beaten up, robbed, and dumped in the desert. 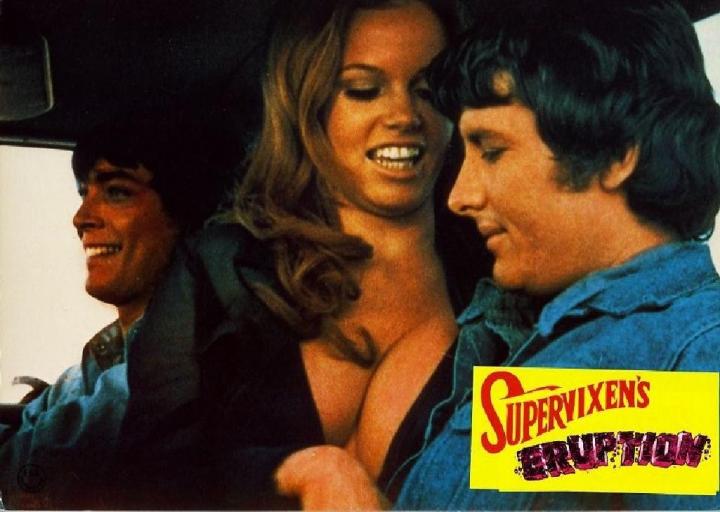 A good Samaritan picks Clint up and takes him home to his new mail-order bride: Super Soul (Uschi Digard), who also tries to rape our hero. Soul is persistent and runs round the farm naked an awful lot, but again, Clint resists temptation, and barely escapes a flying pitchfork. 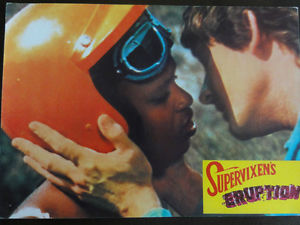 Clint’s next stop is at a motel, whose proprietor has an amorous daughter in Super Eulah (Deborah McGuire). Another attempted seduction leads to another exit stage left through the sand dunes in a scene akin to an X-rated comic book version of a Road Runner chase. 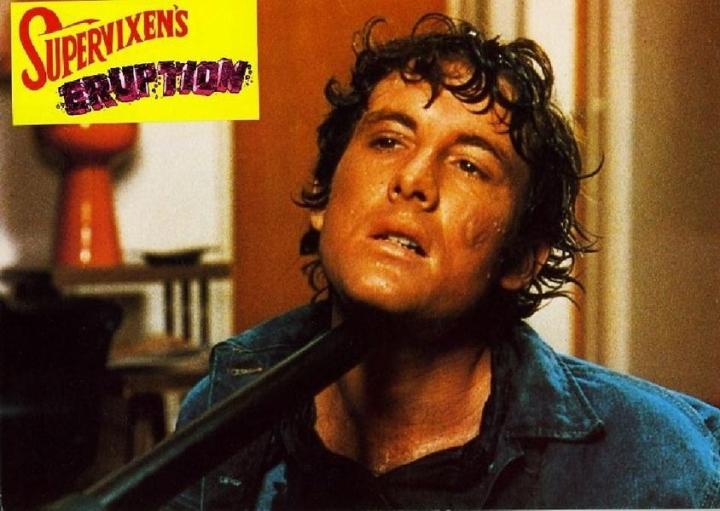 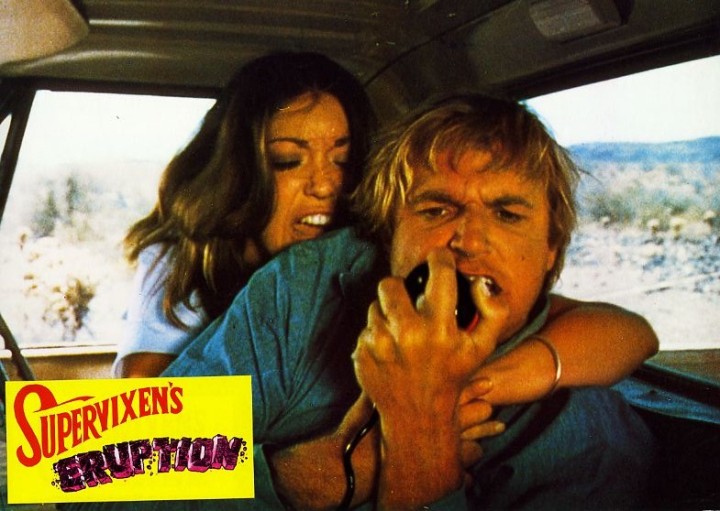 Harry comes to spoil the lovers’ bliss, bringing out his whole arsenal, direct from Acme. Like a certain coyote named Wile E., Harry has bought some defective weaponry and blows himself up. For any viewer that may doubt Meyer’s conscientious homage to Looney Tunes, the director even includes a “beep, beep,” coming from nowhere in the desert as our villain gets blown to smithereens. Topping that is Super Vixen, perched naked atop a phallic rock, shouting “that’s all folks!” like Porky (thankfully) never did. 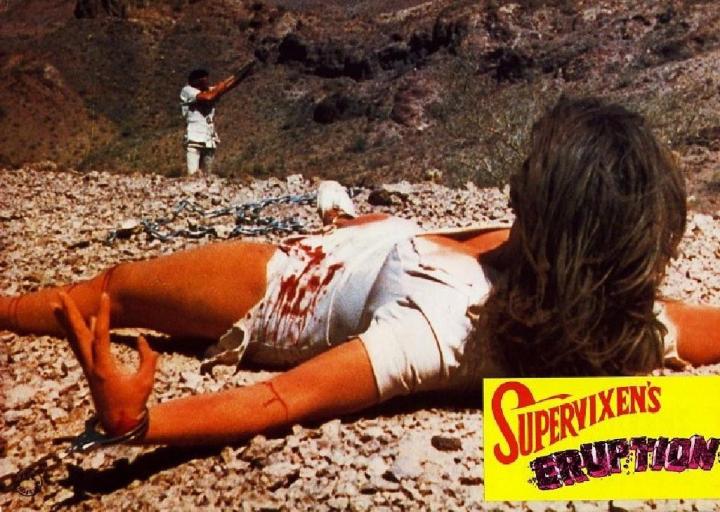 Indeed, Supervixens is a Russ Meyer ramped up spectacle of surreal caricatures paying homage to… Russ Meyer. The best approach is to chew slowly and digest. 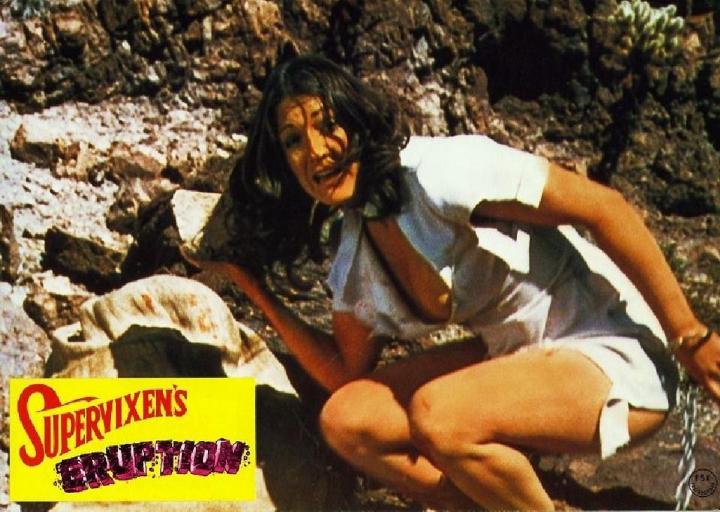