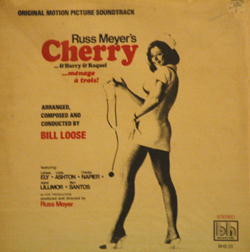 Russ Meyer’s Cherry, Harry, And Raquel (1970) is a film that achieves a sense of hyper-surrealism through kinetic editing alone. Actually, it may be one of the most bizarrely edited films in the whole of cinema. It opens with scrolling text: a strange preamble about the First Amendment and how constipated religious right wackos are a threat to Freedom of Speech, juxtaposed against images of nudie cuties bouncing up and down on a bed.  Naturally, the imagery is intentionally provocative, and there is no doubt that some 1970 evangelical heads exploded when this played the drive-in circuit. Of course, it doesn’t take much to bring out the Pat Robertsons or Donald Trumps, be it boobs or red coffee cups, but Meyer was not about to risk being inoffensive. He not only filled the screen with bouncing udders, but also threw in a “pickle shot” courtesy of actor Charles Napier (in his first Meyer film; from here until 1975 the two collaborated in Beyond the Valley of the Dolls, The Seven Minutes, and Supervixens). Although Napier’s full frontal nudity in Cherry, Harry, and Raquel was brief, it was enough to to earn the movie an “X” certification.

Beyond the hyperbole is an authentically eccentric film that moves like quicksilver. Cherry, Harry & Raquel officially opens with an even more bizarre narration, warning about the evils of potheads and marijuana coming up from Mexico (cue shots of the border patrol and of Uschi Digard, as the goddess Soul, tanning on a yacht). The buxom blonde prostitute Raquel (Larissa Ely) is in the desert, cavorting with a dark-haired man. In case we don’t get it, there are numerous shots of a phallic shaped rock. As she is atop her lover, he grabs her breasts, which sharply cuts to an extreme close-up of Harry (Napier) shuffling a deck of cards in a poker game. The gamblers are interrupted by a knock coming from the door. The messenger informs Harry that “the old man” wants him. However, old man Franklin (Frank Bolger) is busy being orally serviced by Raquel (a strategically placed chalice blocks the view, inviting us to imagine what she is doing between the geezer’s legs). The intercuts are switchblade-like, potentially inducing viewer whiplash. Franklin fares worse because his orgasm is interrupted by Harry come-a-knockin’.

Harry’s ex-biz partner Apache (John Milo) is muscling in on their monopoly drug racket. Franklin gives Harry the order to waste Apache. Harry takes Raquel with him, which of course leads to sex in the desert, and nobody films makin’ whoopee like Meyers: close-ups of white boots tappin’ the pedal to the metal, phallic rocks, naked girls atop a police car, Soul, wearing only an Indian feather bonnet, embracing more phallic rocks, spinning red sirens, and even a sliver of lezbo action. Don’t expect it to make narrative sense. Just kick back and revel as Meyer’s scissors sculpt his softcore ode to Tex Avery. The only thing missing is a lecherous howlin’ wolf (or, perhaps not).

Harry drops off Raquel, picks up deputy Enrique (Bert Santos) and together the two of them head back to the desert after Apache. After a shoot-out, Harry hooks up with buxom nurse babe Cherry (Linda Ashton), has sex with her, drives her out into the desert and transforms her into a sand castle! As Harry digs out Cherry’s vital parts, the two go at it again. Cue quick cuts of Soul: see Soul exercise in the buff. See Soul shower. See Soul run on a train naked. See Soul mate with a rock penis. See Soul eat celery in her birthday suit. See Soul in the desert, sitting naked atop her car as Harry changes her flat tire. See Soul as a nude telephone operator in the middle of nowhere. The desert lovemaking is one of the most authentically strange vignettes this side of Harry Langdon or Doris Wishman. 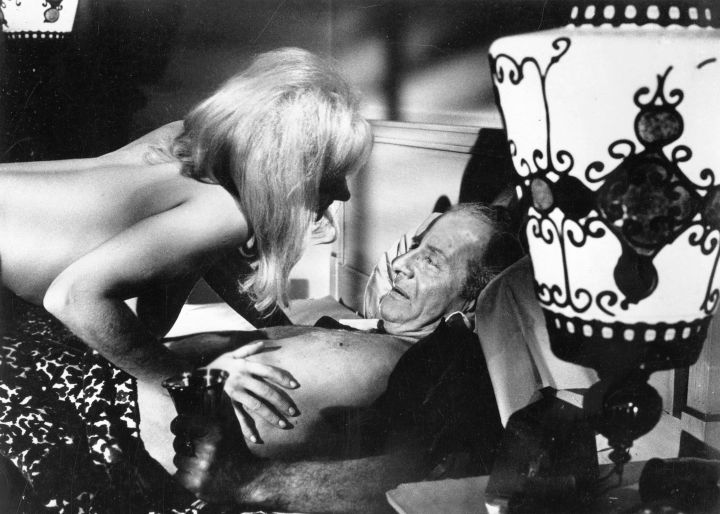 Recovering from that montage, the story proceeds to Cherry giving Franklin a sponge bath, but once again the poor old fella just can’t find completion. He calls Harry: “Send Raquel over for a session. Oh, and kill Enrique too. He knows too much.” Meanwhile, Enrique has sex with Raquel and decides to keep the dope for himself. Raquel snuggles up to Franklin, only to find someone has murdered him in his hospital bed.

As luck would have it, Apache is still alive and kills Enrique, saving Harry the effort. Raquel and Cherry finally consummate their affair while Apache and Harry blow each other apart. Boys will be boys. Girls will be girls.

The narrator returns, assuring there is a lesson in all of this and it has something to do with Soul (and the evils of pot). Of course, no one is going to give a damn about the lesson. If ever a movie was tailor made to go with an entire bag of pizza rolls, Cherry, Harry and Raquel would be it.