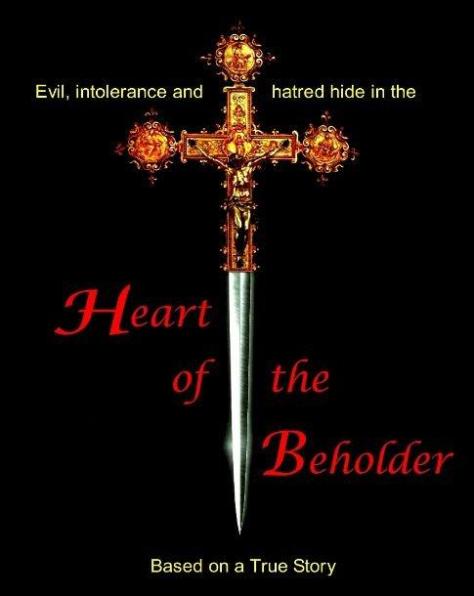 In 2005, Ken Tipton made a labor of love, an indie film called Heart of the Beholder, regarding the true story of the initial video release of Last Temptation of Christ and the effects it has on a family who owned a small video chain in St. Louis, Missouri during the 1980s.

The CFD, Citizens for Decency, arrived when the owners of the chain chose to carry  Martin Scorsese’s controversial film.  These God-loving red, white and blue, flag- waving Americans came out in droves to harass, bully and literally threaten their employees, family, business and life.

These are the same Americans who undoubtedly burned Dixie Chick albums when that group criticized God’s ambassador here on earth, little George W, and are the same Americans who still visit the Heart of the Beholder website telling Mr. Tipton and company that they are going to  hell while undoubtedly pleasuring themselves at the thought of the filmmakers frying for all eternity. Heart of the Beholder is a damned important, desperately needed film. 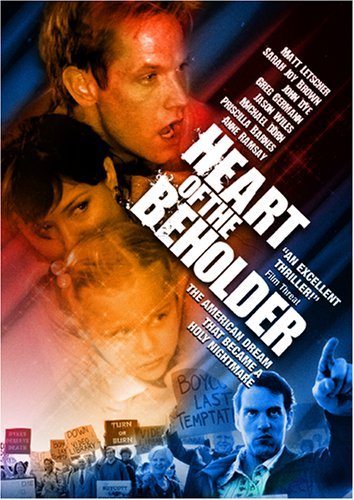 Although Heart of the Beholder received positive reviews and even won some festival awards, predictably, no distributor would touch it.  One would surely think that the making of the film would have brought in some support, perhaps from Temptation‘s producers, Scorsese, etc.  However, even in matters of something this vital, money talks.

Anyone who thinks the religious right is a radical fringe element, not be taken seriously, is naively mistaken.  The religious right, consciously or sub- consciously, still instills fear of commercial backlash.  During that same decade, an uptight fundamentalist minister from Indiana started a campaign to get Ralph Bakshi’s New Adventures of Mighty Mouse taken off the air and, amazingly, succeeded, despite being one of the most critically acclaimed and imaginative television programs of the last thirty years.

Not so ironically, a few years ago our moral majority made a box office bonanza off Mel Gibson’s Lethal Jesus porno flick, The Passion of the Christ, which was easily the most offensive film ever made on the subject.  Fundamentalist churches took their congregations, kids included, to local theaters, by the busload, to see Mel’s torture Jesus fest. Even family oriented Wal-Mart stocked their shelves full of this titillation for fundies.  Its Anti- Semitic tone is frighteningly blatant and for all those who defended the film against well deserved criticism, Mel’s arrest and tirade a few years later requires a resounding: “I told you so.”  Christendom’s comfortable marriage with Anti-Semitism constitutes one of the great, tragic absurdities and is far reaching: i.e., the series of Jesus cartoons being hawked by Christian television station a few years ago that depicted  the most white Anglo-Saxon Jesus ever depicted being persecuted by large, hook-nose adversaries.

The Last Temptation of Christ is a flawed, brilliant film that attempts to probe the meaning and implication of the subject.  Only Pasolini’s Gospel According to St. Matthew contained a comparable breath of spirit (however, since it was made for about 75 cents, it did not inspire a far-ranging, provocative reaction.  The irony here being that it still takes money, stars, and corporate sponsorship for any kind of recognition, even the provocative kind).

Last Temptation is a daring, faithful adaptation of the 1951 Nikos Kazantzakis novel.  Its most prominent flaw lies in the casting of Willem Dafoe as a bland Nazarine.  Many critics of the period singled out Harvey Keitel’s Bronx accent Judas, but it is hardly as disconcerting as an unconvincing, uncharismatic prophet.

Two smaller performances stand out: the vastly underrated Barbara Hershey as Magdalene and the hypnotically subdued Pontius Pilate of David Bowie (who is also criminally underrated as an actor). 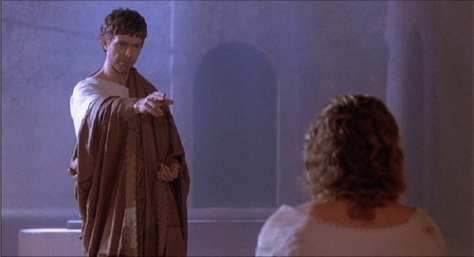 Peter Gabriel delivers a perfect score for this searing, soul-searching film. The Last Temptation of Christ is a film that, like its subject, aptly seeks.  The hypocritical controversy that surrounded it and persecuted its supporters, so vividly depicted in Heart of the Beholder, sadly validates that, for the last 1700 years, persecution of Christians has come mostly from within, not from non-Christians.  Aggressive fundamentalist Christians are the quintessential example of the much picked upon geeks who got picked on in high school by the football jocks, only to become the bullies themselves in college.

Much more information about Heart of the Beholder, including numerous film clips with director’s commentary, can be be found at the film’s website:http://www.beholder.com. Watch it with The Last Temptation of Christ and give a toast to the late Jerry Falwell, the late Jim Jones, Kim Davis, Josh Duggar, Mike Huckabee, Ted Cruz, Joseph McCarthy, Charles Coughlin, Anita Bryant, Donald Wildmon, Mel Gibson, Fred Phelps, or countless other shining examples of Christendom.