Something Weird Video offers up two of the most obscure, absurd, sexually depraved white trash soapers in this 1965 double feature. 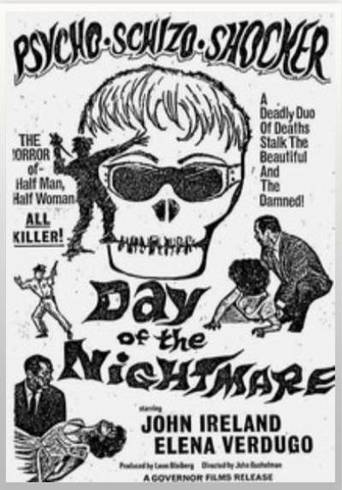 Day of the Nightmare was directed by John A. Bushelman. Bushelman’s directorial credits are few, but he was a prolific editor of low budget cult trash. Cat Women on the Moon (1953), Frankenstein 1970 (1953, starring Karloff), the Sinister Cinema favorite Tormented (1960), and Village of the Giants(1965) are among his (ahem) “notable classics.”

Familiar B-actor John Ireland (who had an off-screen reputation rivaling Errol Flynn‘s) virtually sleepwalks his way through what amounts to a supporting detective role, despite receiving star billing. That leaves the rest of the acting chores to unknowns who, with one exception, are not up to the job. The direction and lighting is as bland and anonymous as the acting and the title, which is unfortunate because, despite lethargic execution, Day of the Nightmare teeters on the edge of having real sensationalist potential by mid 60’s film standards.

The plot is related to William Castle‘s more atmospheric Homicidal (1961). Jonathan Crane (Cliff Fields) is an artist with a few loose screws. He is married to Barbara (Beverly Bain, in her sole screen credit). Poor Barb is a much put-upon wife, and Bain is the only actor able to overcome Bushelman’s static direction.  She invests enough into her character to create an interesting portrayal which, alas, does not salvage the film.
Crane cries (embarrassingly) at his psychiatrist office, Crane has a drag persona, Crane likes to watch lesbos get it on, and Crane has an S & M fetish. The film opens with our hero lashing an unattractive model on her buttocks.  Cliff Fields’ turn as a queen has to be one of worst drag performances ever burned into celluloid. He sports sunglasses at night, a crumpled raincoat and a lopsided dishwater blond wig (he looks a bit like an uncanny precursor to Michael Caine’s transvestite psycho killer in 1980’s Dressed To Kill). 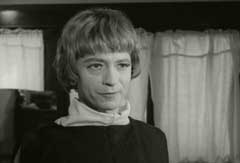 Crane lets loose at the shrink, whimpering about Mommy & the whip! ” Oh mommy whip me!” Crane was traumatized as lad, er, lass, watching mommy bull strangers so eventually he… murdered his pappy. Field’s couch-side wallowing is a lesson in execrable acting. Poor fellow. The script does not try to hide Crane’s “other side” in the slightest. We know his shameful secret from the get go. So, the juicy dialogue is, thankfully, not at all distracted with feeble attempts at suspense. For all the fun that might have been had in the script (which throws in a blindfold swingers’ party and a fun-house mirror freak-out for good measure) Day of the Nightmare is squandered by a director not in on the writer’s jokes. Too bad.

Scream of the Butterfly fares considerably better. Eber Lobato directed from a script by Alan J. Smith and Howard Veidt (who co-directed without credit). The crisp black & white cinematography is courtesy of Ray Dennis Steckler (Incredibly Strange Creatures Who Stopped Living And Became Mixed-Up Zombies), and Steckler does admirably creative work here (perhaps he should have solely stuck to cinematography).

Nelida Lobato (the director’s wife) stars. Although Nelida made a few films before her tragic early death from breast cancer (at 47), in her native Argentina she was better known as a prominent dancer with dynamic sex appeal (she appeared at the prestigious Champs Elysees, the Lido de Paris, and played Roxi in the Buenos Aires version of “Chicago”).

Lobato plays the nymphomaniac Maria, and her reputation as a spirited performer is on full display. She is helped considerably by a lush jazz score, tightly paced script and  enthusiastic direction. The scream of the the film’s butterfly is heard at the very opening, and the remainder of the film treats us to a flashback, which moves like quicksilver.

Our femme fatale Miss Slutzy-Wutzy Maria is prone to fast living and dancing, followed by Calgon nights and bedding down any man willing to satisfy her epic cravings. She weds Paul (William Turner) a bland businessman (Turner certainly makes him bland). On her wedding night, Maria understandably becomes bored with new hubby and finds young, ripped stud David (Nick Novarro, Turner’s top competition in the awful acting department). But David has a secret. Maria is not the only cheater on hand. David is cheating on his lover, Christian (none other than the film’s writer, Alan J. Smith). Smith clearly relishes his role and invests it with biting precision. The film is somewhat frank in dealing with a gay male relationship, which had to have been shocking for its time.
Smith must have been a Montgomery Clift fan, because there are clever homages to Place in the Sun (1951) andFrom Here to Eternity (1953), but Scream of the Butterfly ups the erotic ante, with Nelida making Deborah Kerr look like a Victorian schoolmarm.

This is a sordid gem of sex-ploiter noir that is hampered primarily by the dreadful acting of Turner and Novarro and an ill-fitting pseudo-Freudian conclusion (which is the part written by Veidt). Still, even the conclusion continues the delightfully mean-spirited, drenched in cynicism banter.

Scream of the Butterfly disappeared quickly, and that is unfortunate. However, Something Weird Video has put on its best Mighty Mouse cape to save yet another oddity from oblivion.  This one is deserving.