Rev. Donald Wildmon is, thankfully a dinosaur, a dying breed of self-appointed “moral crusader” bullies who blasphemously oppresses in the name of a peasant Jew who hung out with hookers and derelicts, talked a theology of love, understanding, and peace, and was brutally butchered by Wildmon’s own type some two thousand years ago.  Wildmon bullies in the name of this Jew to masquerade his own ignorance.  Each year that passes it becomes increasingly apparent that the world will be better off when he and his type are extinct. 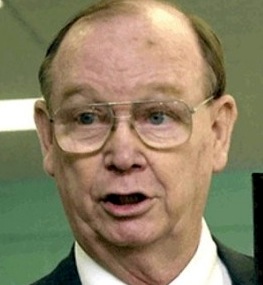 In 1988, Rev. Wildmon saw an episode of Ralph Bakshi’s “The New Adventures of Mighty Mouse.”  The show was imaginative, colorful, and witty.  Wildmon’s Methodist toupee did a double take and he screamed “The Devil” when he saw something he could not understand, let alone appreciate.  (Specifically, Wildmon saw Mighty Mouse happily sniffing a crushed flower, and presumed the scene promoted cocaine use).  So Wildmon cocked up his triple chin and let out a Tarzan styled yell to his fellow Neo-Nazi thugs.  Wildmon and the brown shirts started their march, taking it all the way to the faceless sponsors of “Mighty Mouse.”  It’s not surprising that Wildmon bedded with money to attack an imaginative kids show.  After all, that peasant Jew was killed because he messed with the money system.

So Wildmon and his silly cult bedded with the Pharisees and killed Bakshi’s child.  This was one of many offenses they perpetrated.  I am sure the good Reverend has several trophies on that triple chinned ego of his mantle.  With too few exceptions, “Mighty Mouse” was one of the last times in which television has shown any inclination for imagination, creativity and style.  In its place we have reality TV and trash TV that dumb down to the lowest common denominator.  Thank you, Rev.Wildmon, for your gift.  Yes, there might be a few clever television programs among the dreck, some worthwhile dramas, but aesthetically ground-breaking television, especially aesthetically ground-breaking children’s television, damn near died away when Bakshi’s “Mighty Mouse ” went the way of Lenny Bernstein’s “Young People’s Concerts.” 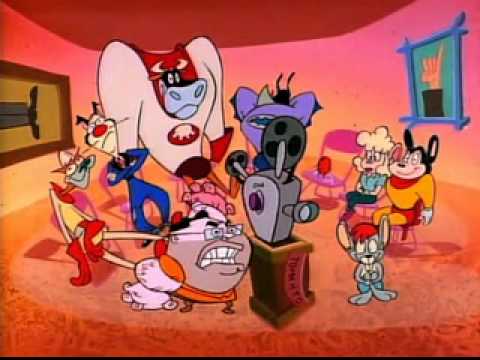 But, that is not the end of the story, Now, finally, “Mighty Mouse” has re-emerged onto a DVD collection to save the day.  Hopefully, Wildmon and his worthless kin, who serve no purpose in life except as societal cancer, will go crawl into a hole and die away.  The rest of us can celebrate the resurrection of our fearless mouse.

Now, “The New Adventures of Mighty Mouse” is, admittedly, a somewhat mixed bag, even if it did undoubtedly influence shows such as “Ren & Stimpy” and “The Simpsons.” Many of the “Mighty Mouse” episodes still retain that irreverent, off-beat style, but some are downright lame.  Most of the weaker episodes feature MM’s annoying Jimmy Olsen-like sidekick, Scrappy.  The best of the Scrappy episodes is “Scrap-Happy”, which is not saying much because, at best, it is a mediocre satire on Disney’s Pinocchio. There are a surprising number of creatively lazy episodes, which are little more than music video compilations.  The first episode is “Night on Bald Pate” which begins spoofing Mussorgsky, Fantasia and Max Fleischer.  It sounds better than it actually is.  The first masterpiece is “Night of the Bat-Bat.”  This is an absolute send-up and an even more contemporary, potent antidote to the ultra-noir caped crusader to which we have now grown accustomed to over the last few years.  “Night of the Bat-Bat” is the first of many satires which will include references to the Fleischer brothers Superman cartoons, Slvador Dali, vintage Looney Tunes,  TerryToons, Tom and Jerry, Tex Avery, Chuck Jones, Crosby and Hope, “The Chipmunks,” “Star Trek” episodes, Vincent Price, Peter Lorre,Woody Allen, and DC Comics, to name a scant few.  McCarthyism, couch potatoes, and unimaginative television executives are big targets, served up with grand Bakshi absurdism.  In this episode Bat-Bat and his sidekick the Bug Wonder tackle The Cow (George C. Scott from Dr. Strangelove in all but name only).  Bat-Bat himself is a loving tribute to the true blue Adam West Batman, and Mighty Mouse comes off as a big lug, not for the first or last time. 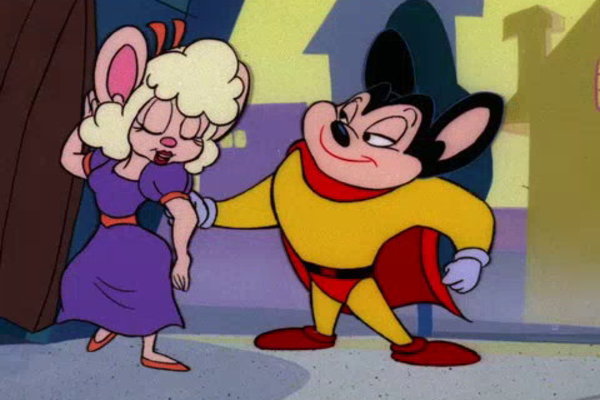 “Mouse From Another House” and “Catastrophe Cat” play off of the “Adventures of Superman” favorite episodes “Superman on Earth” and “Panic in the Sky”, but neither episode really flies. “The Littlest Tramp” is the episode that got the show sacked.  It is a clever send-up of Virginia Cherrill’s flower girl from City Lights with a dash of “Porky in Wackyland.”  Seen today, the “offending scene” of MM and the flower simply registers a WTF? disbelief; the scene simply continues in its Chaplineque fantasy. 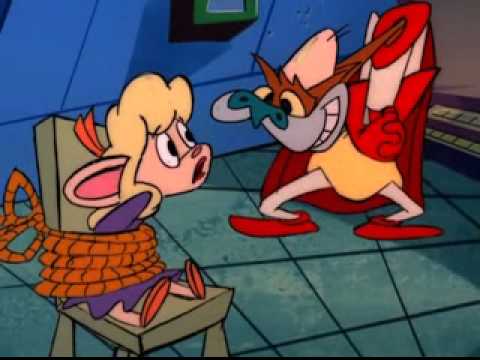 You can never retire a good villain, so The Cow returns in a delightful spoof of the Justice League of America called ‘The League of Super-Rodents”.  “See You in the Funny Papers” is a mile a minute merciless satire in which Dick Tracy-like villains and an out of control fat Elvis balloon wreck havoc in a Macy’s Day parade done up Roy Lichenstein style.

It was in its second and final season that The New Adventures of Mighty Mouse hit its creative stride.  In “Day of the Mice” a washed-up grotesque Mighty Mouse does battle with a giant Pee Wee Herman.  He tells Pee Wee, “I have waited a whole season to do this” (Pee Wee’s Playhouse came on right before MM) and then saves the day in a Jimmy Stewart Mr. Smith Goes to Washington climax.

In “Mighty’s  Wedlock Whimsy,” Mighty and Pearl marry (in a dream) thanks to two cupids (named Gandy Goose and Sourpuss), who uncannily resemble Mr. Kidd and Mr. Wint from Diamonds are Forever.Suburban hell follows and MM mutates into Jackie Gleason fromThe Honeymooners.  “Anatomy of a Milquetoast” brilliantly satirizes both Perry Mason and the first season’s weaker Scrappy episodes.  MM becomes victim to a remote control couch potato in the brilliant “Don’t Touch that Dial.”  Here, our hero gets thrown into a series of non-stop misadventures with The Flintstones, The Jetsons, Scooby Do, Rocky and Bullwinkle with Ed Sullivan, Sylvester Stallone and Marlon Brando thrown into good measure.  The second season of The New Adventures of Mighty Mouse really does not falter at all,which makes it even more tragic that its life was cut short by Wildmon and his band of thug stormtroopers. God bless America.

A quite good documentary can be found on disc three.  It’s been twenty two years since The New Adventures of Mighty Mousehas seen the light of day, but it’s hard to keep a good hero down.  After all, sometimes the good guys do win.