William Shatner’s Star Trek V: The Final Frontier (1989) has been called the “Plan 9 of Star Trek.” There is no denying that it is awful, but it is more like the misfit Yukon Cornelius of Trekdom. It is not quite as bad as Star Trek III: The Search For Spock (1984), and to say that Star Trek IV: The Voyage Home (1986) is ludicrously overrated is a given, especially when the best performances are by two anonymous trash collectors. William Shatner, perhaps feeling envious of Leonard Nimoy’s directorial “successes,” insisted on his turn at bat. Rather than keeping the franchise in the experienced, imaginative hands of director Nichols Meyer ,who had written and directed Star Trek II: The Wrath of Kahn (1982), Paramount and producer Harve Bennett foolishly handed the asylum keys to lunatic stars who had no experience in big budgeted space oaters apart from acting.

The Star Trek movies justifiably receive much criticism, but pound for pound, they are no worse than the Star Wars franchise. A couple of the Trek entries (the ones directed by Meyer), while hardly great moviemaking, are actually better than almost all of George Lucas’ productions (the exception that proves the rule being The Empire Strikes Back,which was directed not by Lucas, but Irvin Kershner).

Nimoy’s directorial style was as lethargic as a Vulcan, even in the light, humorous Voyage Home. The strengths in that film are the parts written by Meyer, which are not difficult to pick out. Nimoy’s Spock had about as much charisma as John Boy Walton, and the idea of ham-fisted Shanter directing at least presented a potential tonic to all that academic Vulcan piety. In some ways, Shatner’s opus lives up to that potential, but unlike Captain Kirk, the director/actor displayed a lack of confidence and his famous counterpart’s balls.

Shanter’s original story had the geriatric crew actually meeting God, who, it turned out was Old Nick himself, and the lot of them are literally thrown into hell. The sheer outrageousness of the idea is replete with wonderfully pretentious possibilities. However, both Gene Roddenberry and Harve Bennett were outraged, and informed the newbie director that in no way could the interracial spacemen meet the deity or go to hell. Foolishly, Shatner buckled and devised a cop-out solution. Worse, Paramount wanted good old boy humor injected into the proceedings, in hopes to match the box office success of the previous entry. Shanter agreed to hand over script duties and Final Frontier was assigned to hack writer David Loughery, who turned a bad, original idea that might have been worthy of Plan 9 comparisons into a generic plot designed for old, farting men.

Laurence Luckenbill was cast as Spock’s renegade half-brother, Sybok. Shanter had described Sybok as something akin to a televangelist. That was lost in the translation because, as scripted by Loughery, the character is more of a New Age guru. Luckinbill does have charisma, more than most Trek villains, but it’s a misplaced charisma. Even that could have been tapped, but Loughery fails to do anything with it. Apparently, the writer had no actual exposure to either right-wing religious kooks or cartoonish, leftist New Agers. While that is fortunate for Loughery, it turns out to be a bummer for the audience.

Shatner’s compromised plot does have more in the way of narrative than those by Nimoy, who essentially molded his two entries around the ensemble. The Final Frontier has a refreshing dusty look and costuming along with a good line from DeForrest Kelley’s Bones. In the middle of an infamously wretched campfire song, the three principals are roasting marshmallows. Spock doesn’t “get” the lyrics of “row, row, row your boat” and the ever-crass Doctor grumbles: “God, I liked him better before he died.”  The under appreciated Kelley, as usual, turns out to be the most entertaining cast member.

Even worse than the gas station humor, mountain climbing, or Spock in jet boots is the sight of Shatner, sticking out his chest for the camera, wearing his “Go Climb A Rock” message tee for all to see. The only thing missing is a wad of gum. This scene alone more than justifies a Commander Taggart. 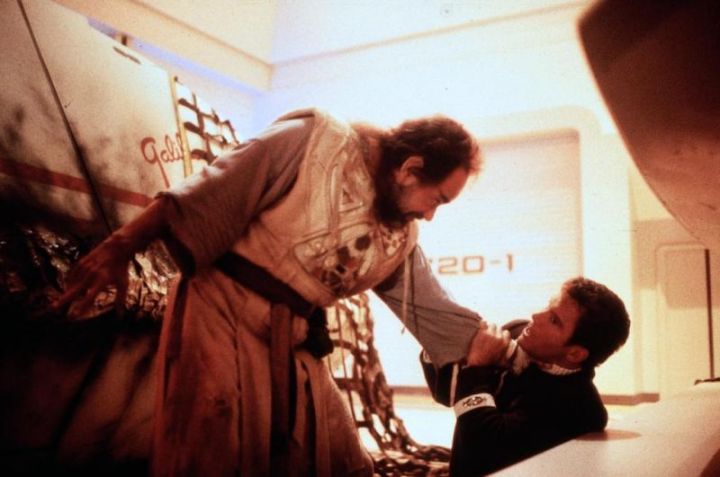 Shatner and Loughery introduce a trio of characters and then inexplicably dump them. A bored Klingon and his buxom babe, Uhura’s moonlit striptease, Scotty’s sudden lust for Uhura while eating potato chips, agnostic theology at its most cornball, a Heaven planet with unforgivably cheap FX, and a fuzzy group hug finale solicit well-earned groans, even more so twenty-five years later. However, despite the PC interracial cast, occasional sexism, barbershop-styled backslapping, a lot of bad acting, and the fanatical following, it is easy to succumb to the charm of the original cast (far more so than the Next Generation, whose feature movies were even worse).

Executive producer Gene Roddenberry dismissed The Final Frontier as an apocryphal Trek entry. His original, commendably simple concept for Star Trek was “Wagon Train To The Stars.” Somewhere along the way, Roddenberry and his Trekkers mantled delusions of grandeur and began treating his starry oater as holy writ. Roddenberry essentially became a kind of Scientologist parody, who predictably reacted like a shrieking vampire to Shatner’s own take on western religious fables. Although one cannot recommend Star Trek V, it  serves its essential purpose as a campy, unintentional diversion from all that sanctimonious sci-fi mythology. That part, Shatner nailed.