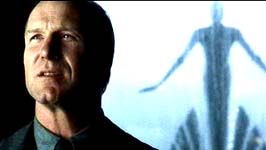 Once or twice a decade comes a film that polarizes audiences, particularly of the American variety. This is not surprising given that few Westerners, spoon-fed on undemanding aesthetics, even know how to watch film. Recent examples of divisive cinema include Noah and Birdman from 2014. Both appeared to be genre films of sorts. 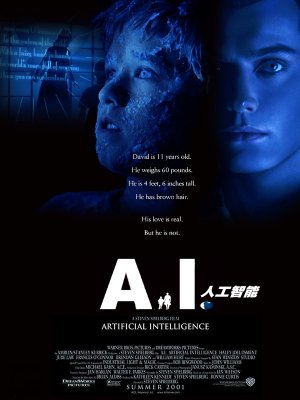 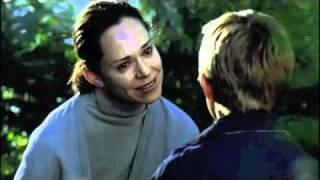 The audiences going to Noah jumped off the church bus, expecting to see the cinematic equivalent of a Velcro bible lesson with rosy-cheeked prophet loading friendly snakes into his wooden yacht, capped off by a “Love American Style” rainbow. Instead, they were pounded by Aronofsky’s brass knuckles of mythological and theological diversity, with a Creator who actually cared about his planet. The result was widespread provocation.

Birdman was a sort of belated, near perfect follow-up to Batman Returns (1992) (never mind that it was a bird instead of a flying rodent). Michael Keaton’s Bruce Wayne was off-kilter as his alter ego, and the hyperkinetic actor was tailor made for this iconic role, revealing slivers of a manic-depressive personality as he played ringmaster in a freak show carnival. Birdman takes that development further, exposing the actor behind the actor behind the suit. Audiences, desiring more blockbuster mayhem, were treated to something far more idiosyncratic and original. By and large, they responded like a hostile bull charging to a flag of artsy-fartsy red. 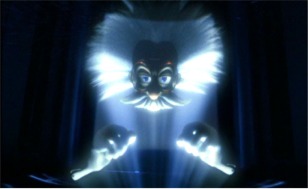 Of course, both the Bible and comic books have scores of zealous adherents, particularly when it comes to cinematic treatments of the objects of their adulation. Science fictions fanatics are made of similar stuff. When Ridley Scott‘s Prometheus was released in 2012, the Alien fans were deeply offended by the lack of a guy in an H.R. Giger gorilla suit. In place of mugging Ritz Brothers and Bill Paxton was the beautifully enigmatic pro-choice seeker Noomi Rapace. Too original for bourgeoisie creampuffs, Prometheus stole the fiery expectations of the sci fi formula. Genre disciples screamed blasphemy and branded Scott as Judas.

Eleven years before Prometheus, there was the Steven Spielberg/Stanley Kubrick hybrid A.I., which was, perhaps, saddled with more preconceived notions and baggage than any film of the last half century. 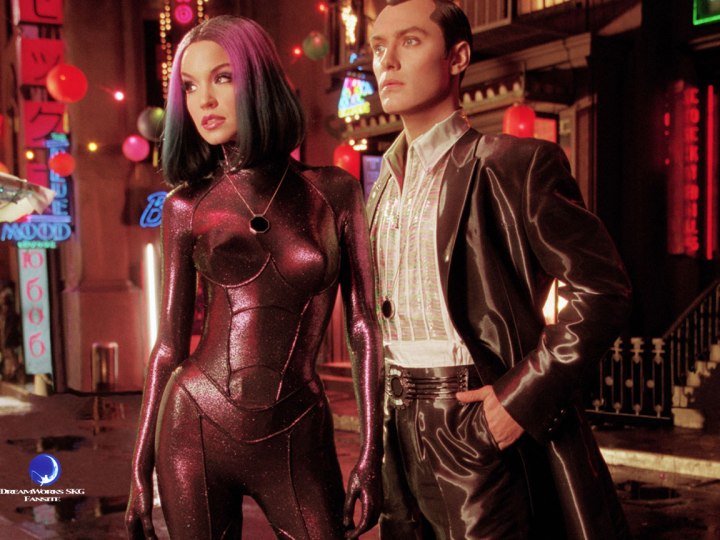 The introductory obstacle was the Spielberg proselytizers, who hoped for heart-tugging family fare about a cute plush toy. Knowing that A.I. had been attached to the late Kubrick, Spielberg’s sycophants probably had the most misgivings. 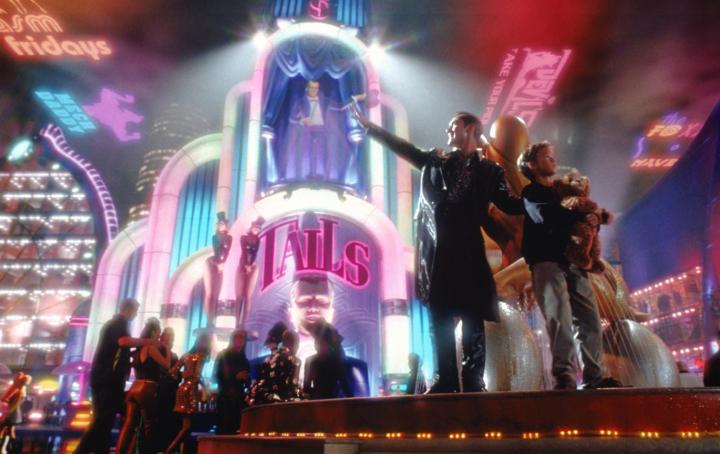 The second obstacle came from the church of Kubrick. Now that Stanley was dead, he was, of course, canonized. In that parish of holy auteurs, there was much weeping and gnashing of teeth among the parishioners. That populist antichrist, Spielberg, was notfit to kiss the master’s relics, let alone helm this unfinished project. Despite the fact that Kubrick himself wanted Mr. E.T. to direct, the Kubruckians knew that the result was going to be high cholesterol.

The final, and no less considerable obstacle was found in the uneasy bipartisanship of Science Fiction and Disney communities. The story, they were told, was a sci-fi version of “Pinocchio.” The former hoped against hope that the man who once collaborated with the omnipotent George Lucas could transform any hint of 2001-style weirdness into Jedi magic. The latter erected their bronze statues of the little wooden boy and his conscience while praying Walt’s Liturgy of the Hours throughout pre-production. In the dark night of the soul they got a glimmer of hope in the form of Robin Williams being cast as the voice of Dr. Know: “After all, look what Mork did for Aladdin.”

Fortunately, Spielberg disappointed everyone and made what was possibly his best, most driven, and inspired work in twenty years. Channeling Kubrick seemed to reignite Spielberg. He followed A.I.with two superior films in 2002: Minority Report and Catch Me If You Can.

Fresh off the success of The Sixth Sense (1999), Haley Joel Osment was cast as the mecha David. In “The Hidden God: Film and Faith,” Stan Brakhage attributes much of the success of A.I. to the child actor: “Osment, the Mozart of living screen actors, trained himself to never move his head before he’d move his eyes first, to always take the exact same steps around any corner, and yet to retain some full measure of himself as being very normally a little boy. Without his great art of acting at center, the film’s themes would be completely unrecognizable.”

Jude Law‘s postmodern performance channels elements of  Chaplin and Astaire, coming out as his own Gigolo Joe.  He is uncannily mesmerizing, and when he gets nonchalantly whisked away by apocalyptic birds of prey we are authentically moved (for the first time in a long time from a director who had mastered sentimental manipulation). 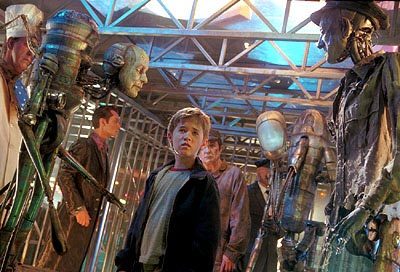 When A.I. finally premiered, it was the Kubrick-as-God faction which cried foul first and loudest, accusing Spielberg of producing a sentimentalized Apocrypha. The finale, which still inspires derision, was typical Spielbergian bathos. The complaints stem from an ill-informed, lazy reading of content. The character, as created by Carlo Collodi, was originally shorn of a maternal figure. The Spielberg/Kubrick hybrid remedies that with a seething, schizoid Oedipal relationship. The image of Bambi torn from his mother, seared into American pop culture consciousness for half a century, is inverted, repeatedly. We are plummeted into a heartrending abyss when Momma Monica (Frances O’Connor) abandons our robo-gamin to the dangers of the big bad cruel world’s flesh fairs (lorded over by a shrewd Brendan Gleeson, as a monster-truck priest who assures his redneck parish, “we are only demolishing artificiality”). Spielberg, who takes sole credit for the screenplay (acknowledging his mentor as an “inspirational source”), catapults David into a seemingly futile, millennium-long effort to climb back into Monica’s womb. Rendered voyeurs to an unattainable Oedipal complex, the audience is equally exasperated. 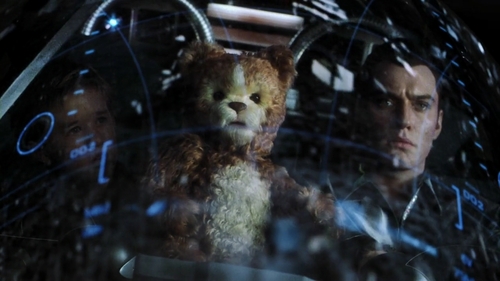 William Hurt is the Gepetto figure, Dr. Hobby, and despite his own past tragedy of a dead child, his is a barren paternity. When challenged by an associate’s question regarding the responsibility of paternal love, Hobby responds: “Didn’t God create Adam to love him??” Of course, we know how that turned out, and can relate to David’s rejection of such frigid divinity.

David’s perseverance reaches Mahlerian proportions and, once resuscitated, he winds up in bed with mommy.  The film’s opening shot of a symbolic, maternal ocean cues us to the epic fairy tale  about to unfold: “A symphony, like the world, must contain everything.”

Having previously had a real live boy (Jake Thomas, as the Sleeping Not-So-Beautiful Martin), now in a frozen coma, Monica’s maternal tragedies repeat their patterns, with a blurred parallel between the broken Cain and Abel of pragmatic humanity and artificial intelligence. O’Connor’s remarkable performance breaches all the devastating transitions with failure intact.

The faith of artifice supplants the impatient faith of humanity. As Brakhage writes: ”Time must stretch, within the fiction, to thousands of years. It must do so (as an equation) to counterbalance (thus make sense of) the single day in which the child can reconcile with his originally abandoning mother. The final element needed is Time, the time in which a thinking-machine (in the form of a little boy) can exercise insurmountable Faith.” 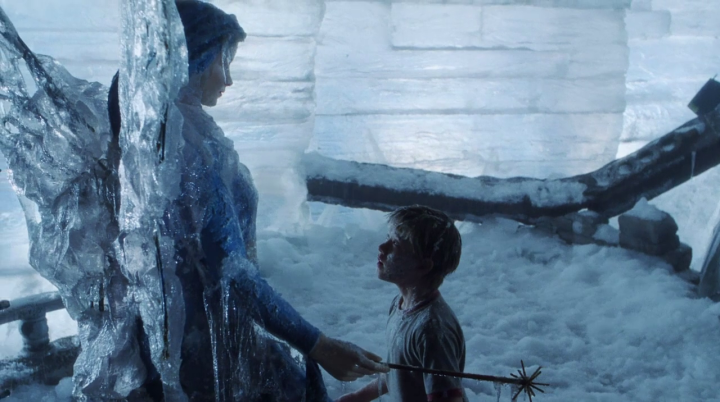 The narrator (Ben Kingsley, mantling a pedagogical Kubrick) feeds the illusion of David to the audience, even after we have been informed, by artificial life, that resurrection is futile in its inevitably fleeting state: “That was the everlasting moment he had been waiting for. And the moment had passed, for Monica was sound asleep. More than merely asleep. Should he shake her she would never rouse. So David went to sleep too. And for the first time in his life, he went to that place where dreams are born.” 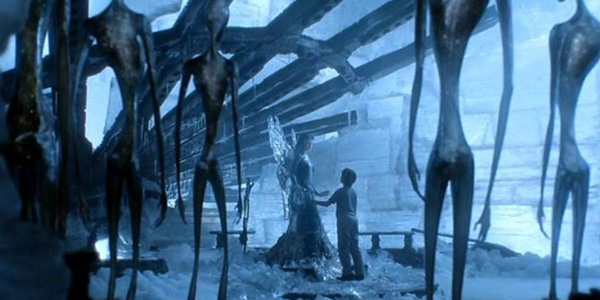 With a 100 million dollar budget, Spielberg produces the quintessential Hollywood movie, which breaks the tinseled formula. As Brakhage writes: “Kubrick could not find the solution to A.I. in himself.” Like Monica, Kubrick abandoned his child, but by burying his filmmaker’s ego, he gifted Spielberg’s ambition.

E.T., Close Encounters of the Third Kind, and 2001 all inform A.I., but those nostalgic influences are merely twin beds sharing the same bedroom of sibling rivalry. E.T. has devolved into a Jiminy Teddy who, despite protestations, is merely a toy. “The Blue Fairy,” staring aquatically, hears no prayer. Dr. Know is no genie and grants no wish. David, with programmed innocence, succumbs to no mandated character arc. He perseveres in synthetic faith and his dismissive “to hell with reality” is rewarded with an embalmed wet dream.