While tame by 21st century standards, the best of the pre-code productions (1929-1934) flauntingly mocked the increasing threats of industry censorship and yet, for all those displays of sex and sin, still managed to stylishly outclass thirty years of (mostly) bland “moral majority approved” films that followed. It is, perhaps, not surprising that these films, caught in the tail pipe of Victorianism and under the Poe-like eye of the Catholic Legion of Decency, were also more authentically provocative and aesthetically conscientious than the bulk of the “opened floodgate” post-Code productions that began in the 1960s. Somehow, that stressful studio climate inspired filmmakers to produce movies that were very much enshrined in the amber of their specific time and place,  yet also transcend many of the films immediately following.

Red-Headed Woman (1932) is one of the sauciest examples from that all-too brief period. It helps considerably that it stars Jean Harlow, the quintessential pre-Code sex symbol. Harlow has often been referred to as the Marilyn Monroe of the 1930s. (Monroe idolized Harlow and even considered playing her predecessor in a biopic, but changed her mind after reading the script. Monroe reportedly quipped: “I hope they don’t do that to me after I’m gone.”) Actually, Harlow was more talented and interesting than that later icon. After numerous roles in features and short films (including a memorable bit in Laurel and Hardy‘s Double Whoopee), Harlow became an “overnight sensation” with 1930’s pre-Code Hell’s Angels (dir. Howard Hughes) and 1931’sThe Public Enemy (dir. William Wellman). Having been dubbed “the Platinum Blonde” and “the Blonde Bombshell,” Harlow dyes her trademark tresses here to play a carrot-topped succubus.

With a screenplay written by Anita Loos and F. Scott Fitzgerald (based on Kate Brush’s “Wicked Lady”), and competently (if not altogether imaginatively) directed by Jack Conway, the strength of Red-Headed Woman lies in the writing and acting (the ladies seem to get it more than their male director).

Harlow is Lil, an unflinching mantis who ferociously devours her prey without even pausing once at the stop of moral consideration. Harlow imbues Lil with such intoxicating, nonchalant witchery that we initially root for her, regardless of how many Sunday School lessons we might have endured that strenuously warned us not to. It was this necromantic charm, combined with the film’s failure to punish its Eve, that partly inspired the moral outrage that accelerated strict enforcement of the Motion Pictures Production Code (the “Hays Code”) amere two years later.

Lil isn’t out for love (that is an alien concept to her), she is out for money. She purchases a see-through dress and sets her sights on William Legendre (Chester Morris), the boss’ son. That William is married to his pretty-as-porcelain childhood sweetheart Irene (the underrated Leila Hyams) hardly registers to Lil. Lil straps William’s candid photo to her garter and offers him casual sex. As dull as William is, he naturally cannot resist. Unsurprisingly, that casual sex comes with a mountain of fiery baggage, packed in Harlow’s petite frame.

Red-Headed Woman is the original Fatal Attraction, and our sympathies shift from Lil to Irene, although we are at a loss to understand why losing the traitorous William would be such a blow. Hyams, who also starred in two other 1932 Pre-Coders—Freaks and Island Of Lost Souls—gains our support through sheer personality. She could have easily lost it, as she seems the model of the girl-next-door suburbanite.

Adultery, frank sexuality, divorce, hedonism (prohibition be damned), and gold-digging are cherries on top of the icing on top of the cake. After William and Lil marry, she inhales several more species of the male sex. She spends much of the film as an erotically dressed hellfire harpy who likes her beatings and leaves the men in her life hopelessly, hysterically begging for release. Lil shows astounding chutzpah as she seeks societal acceptance and resents her tramp moniker; Harlow clearly has no sympathy for her character, nor does she ask that of us. Hers is an uninhibited, gutsy portrayal of a narcissistic schizoid who blatantly refuses to regard Karma’s rules; nor does the film itself, which proved shocking to 1932 audiences.

The phrase “three on a match, one will die soon,” is the relic of an old wives’ tale that proves diving board for Three On A Match (1932). The three in question are Ann Dvorak, Joan Blondell, and Bette Davis. It also stars that pre-Code favorite of suave sleaze, Warren William, although he really is not given much to do.

Upon its release, Three On A Match, unlike Red-Headed Woman, was critically panned (in contrast to the censors and public, said critics, by and large, seemed immune to moral judgments of the film industry). Since then, it has developed a small cult following. While hardly as memorable as Red-Headed Woman, Three On A Match boasts three-and-a-half performances that justify its cult status. Surprisingly, it is not Bette Davis or Williams who outshine the raw direction (Mervyn LeRoy) and ho-hum writing (Lucien Hubbard). Rather, it is the perennially underrated Dvorak and Blondell, with slimy Lyle Talbot and an even slimier, pre-icon Humphrey Bogart (in a small part) that steal the acting honors.

Mary (Blondell), Vivian (Dvorak), and Ruth (Davis) have a long, shared history. In 1919, Mary was the bad girl, given to smokin’ in the boys’ room. Tobacco and penises predictably sent Mary to an extended stint in reform school. In 1932, she is trying to make a dent in showbiz.

Vivian, stuck in a dull marriage to Robert (William), takes their intolerable urchin on a getaway cruise, only to run into old gal pal Mary, who introduces her chum to a new phallic flavor: Michael (Talbot). Michael introduces Vivian to sex, the devil’s powder, sex, prohibition juice, and more sex.

Bogie makes a brief appearance as a gangster, who has the heartless audacity to inform Vivian’s waif that Mama is preoccupied with snorting the white manna.

Aghast at having created a monster of Frankensteinian proportions, Mary sets out to right the tragedy of her wrongful influence. Vivian, once a staunch critic of Mary’s looseness and choices, unwittingly reduces herself to a model of self-righteous hypocrisy.

Davis, unhappily stuck in the capitalist machinery, barely registers. There is not much in the way of plot, and the film errs in dropping Blondell for a third of the narrative, although Dvorak is engrossing throughout. It moves at a breakneck clip, doesn’t arch an eyebrow at extramarital sex, disregards prohibition, practically convinces us that marriage is shorn of sanctity, and is filled-to-the rim with peek-a-boo lingerie, inflamed testosterone, and women who enjoy sex as much as their male counterparts.

According to Three On A Match, the old wives’ tale has a kernel of authenticity, which it milks with all the subtlety of pre-Code brass knuckles. Its themes and reticence to entirely subscribe to the reap/sow formula would have rendered it unapproved by the Breen office, a mere two years later. 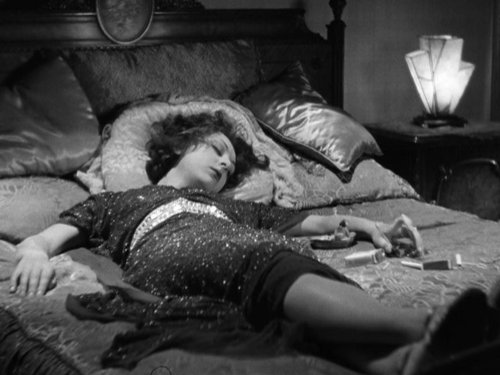