This odd hybrid could only have been produced in an era which gave no credence to genre labels.  Riders of the Whistling Skull is the kind of movie which is so delightfully in love with its period that one could easily imagine a true genre geek like Tarantino falling in love with it today.  Director Mack V. Wright is completely comfortable throwing horror, western, jungle, mystery and comic relief into a seamless mix.

The Three Mesquiteers (Bob Livingston, Ray Corrigan, and Max Terhune), for those not in the know, were the starring trio of a number of “B” westerns.  The well-photographed, well-paced Riders of the Whistling Skull is, by far, the best of these.  Pretty girl Betty Marsh (Mary Russell) is searching for her lost father, Professor Marsh (John Van Pelt), who, along with Professor Flaxton (C. Montague Shaw), has been kidnapped by a diabolical Indian cult.

Enter the Three Mesquiteers, who have found the injured Flaxton in the desert.  They take him to Miss Marsh.  Flaxton revives long enough to tell all that he and Professor Marsh found the lost city of Lukachukai (!) hidden deep in the region of the Whistling Skull Mountain.  Flaxton tells them of vast hidden treasures and of the unspeakable horrors of the ancient cult.  Before Flaxton can reveal the location of Lukachuka, the lights suddenly go out.  When the lights are turned back on Flaxton is discovered on the ground with a knife in his back.  Inscribed in the handle of the murder weapon is ancient Indian curse.  The mystery begins!

After a treasure map is discovered, The Mesquiteers join Betty and travel into dreaded taboo territory in order to find Professor Marsh and to uncover the identity of Flaxton’s murderer.  Shortly into the expedition, one member of the party is murdered, shot by an arrow inscribed with the same ancient Indian curse as the knife.  Another member of the party, Professor Fronc (George Godfrey) is kidnapped, tortured by Indians, and tied half naked to his horse, after being branded with the brand of the ancient Indian cult of Anastasia. 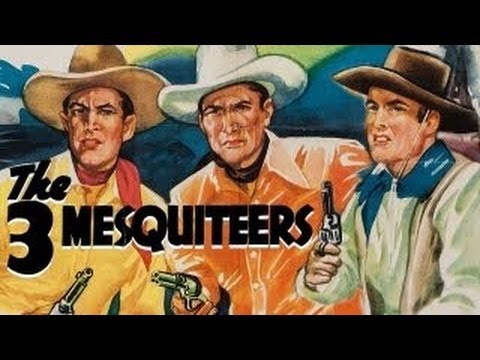 Silhouetted Indians atop Coachella Valley (atmospherically shot) attack the expedition with flaming arrows shot into the wagon, which of course, demands late 30’s, western-styled expert stunt work.  Betty goes missing in the ensuing chaos.  The Three Mesquiteers go out in search of her and find her in the middle of an ancient Indian cult ceremony.  Russell’s tight, white shirt competes with her equally tight slacks and the even tighter jeans of our three cowboy studs for inducing the most testosterone and smoldering sex appeal.  One halfway expects King Kong to come out of nowhere and seize the heroine from the clutches of the natives, but no such luck.  Never fear, because the Mesquiteers are old hands at heroically saving virginal heroines when danger looms.

When the expedition finds Whistling Skull, they stumble upon more killer natives, secret passage ways, living mummies, and Professor Marsh.  Corrigan wins the testosterone contest when he loses his shirt, bares his chest, fights off the cult, and saves pal Livingston.  The mystery is solved when the murderer is exposed.  Luckily, the Sheriff and his band have been following from afar.  They lend a hand in dealing with the murderer, defeating the natives, and surviving a terrible avalanche, all before the neatly wrapped last line of comedy relief.