Time to dust off this collection of B-Westerns from Sinister Cinema’s Sinister Six-Gun Collection.  The packaging is ultra-cool, starting off with those priceless trailers: 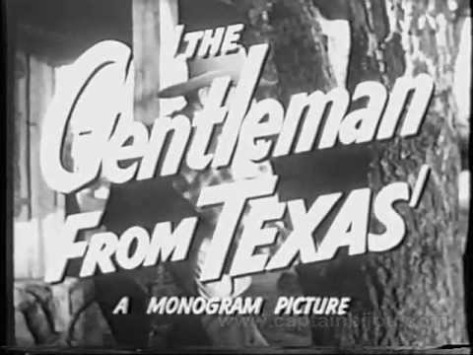 Trailer # 1: “Ride at Full Gallop into a Thundering Texas Romance to the rescue of a girl haunted by killers!  Johnny Mack Brown as the fist-flashing GENTLEMAN FROM TEXAS” blazes across the screen as Johnny shoots and punches his way across bar tables.  Add in beer bottles over the head, a pretty dame named Claudia Drake and the TrailsMen singing “Texas Jubilee” on banjos.   It’s a “Violent Drama of Valorous Love and Texan Vengeance” from Monogram Pictures. 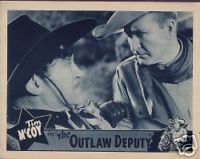 Trailer # 2 screams “It’s the Real McCoy” (as in Tim McCoy) “heading this way to tame the town that defied the law!”  More fisticuffs, six-guns blazing, horses, good guys in white hats, and fallen bad guys in black hats (who never bleed) are all promised.  “The Outlaw Deputy Tim McCoy made bad men check their guns while he checked up on romance!  Cow-Town became a mad-house of Thundering Action when the nerviest outlaw East of the Rockies turns OUTLAW DEPUTY!”  A Puritan Picture. 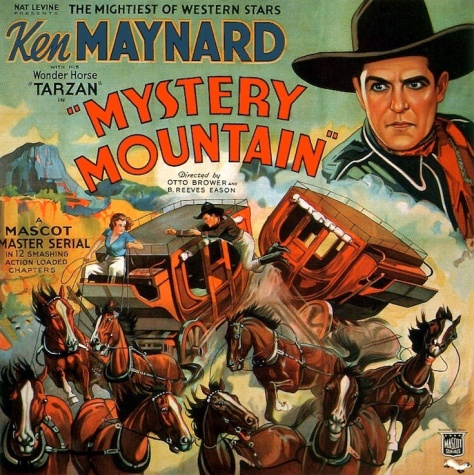 Trailer #3: ” Come Along Boys and Girls on a Thrilling Trip to MYSTERY MOUNTAIN where KEN MAYNARD the screen’s most popular Cowboy Actor and his famous horse TARZAN will ENTHRALL you!  will THRILL you!  will STARTLE you!  in their 1st SUPER SERIAL!  ACTION!  ROMANCE!  All the THRILLS of THE OLD WEST!  Don’t miss seeing Ken Maynard and his horse Tarzan in MASCOT’S MIGHTY EPIC  SERIAL MYSTERY MOUNTAIN! WATCH FOR IT!”  This one has all the elements of the previous two, but throws in locomotives and a star horse.

Time for the feature now, a SUPREME PICTURES CORPORATION starring JOHNNY MACK BROWN in COURAGEOUS AVENGER.  After heisting a bullion shipment some despicable thugs are hiding in the desert, kidnapping local drifters for slave labor for their mine!  Soon, hero agent Johnny enters, decked in ten-gallon white, white suit, white tie, beaming an All-American Football hero smile and dimpled square jaw (naturally, a few yeas later, that square jaw was a bit hard to see under an extra chin, which was still one less than the two extra ones that fellow cow-hero and middle-aged Ken Maynard acquired).  Johnny finds himself commissioned to round up bad guys who killed their latest gold heist victim with three silver bullets.  Shucks, Johnny was just getting ready to go on vacation too.  Duty calls especially when Johnny finds the victim was his girl’s brother and “we were chums too!”  Johnny embarks on the mystery and a quest for justice, western-style.

To complicate matters, the ring of bad guys is lead by none other than his girl’s evil step-dad.  It doesn’t take long for the obligatory desert fight between Johnny and the bad guy, rollicking between the rocks in ass-hugging tight jeans.  After some ass-kicking, Johnny infiltrates the ring, frees the slaves (a dose of grand guignol in that scene) , stops the next heist,  and after a couple of thrilling stunts, rounds up the baddies and literally rides off in the sunset with girl Helen Ericson (who is mere decor).

Courageous Avenger is a 16 mm print and so is as good as it can be (especially since it was probably shot for about $50.00).  There’s no soundtrack music to liven things (fairly common for 30’s B-Westerns), the sound itself seems to come and go, nor is it any great shakes, even for a period B-Western.  But, it is a helluva lot of fun in grand Sinister Cinema packaging and you can’t really go wrong with Brown (although he looked even better with Beth Marion at his side).

The B-Westerns never received much respect in their day, and certainly don’t now, but pass the big bucket of buttered  popcorn and give me this over Avatar any day. More to come.  Dedicated to Dad. 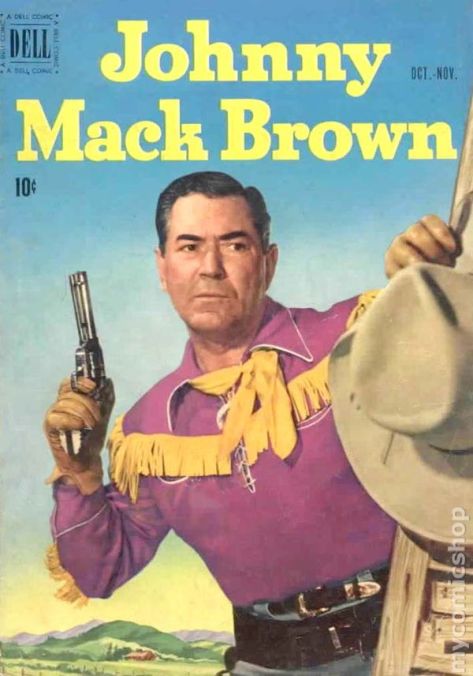