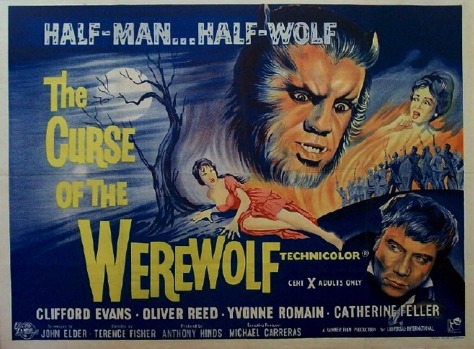 Terence Fisher never considered himself a “horror” filmmaker, and he clearly disliked the term.  While a number of Fisher’s film could be apt examples to drive home his point that he was more than a mere scare merchant, The Curse of the Werewolf(1961) will suffice quite nicely. This is a quite literary film, far better than either of Universal Studio’s versions of The Wolfman (1941 & 2010).

Fisher and writer Anthony Hinds (loosely adapting Guy Endor’s novel) weave a narrative tragedy through folklore, mythology, religious metaphor, and character revelation.  The symbols of class struggle ebb throughout the film, beginning in 18th century Catholic Spain.  A beggar is imprisoned in the dungeon by the powerful and callous Marques (Anthony Dawson).  Naturally, the beggar is forgotten about, cared for only by the jailer and his mute daughter.  Years later, after her father’s death,  the now grown servant girl (Yvonne Romain)  tends the beggar.  While cleaning the aged Marques’ room, Romain rejects her master’s sexual advances and is imprisoned in the very same dungeon occupied by the beggar.  After resisting the brutal, savage passions of the Marques, the  girl is raped by the crazed and dying beggar for whom she has cared these many years.  In retaliation, once released, she stabs and kills the cruel Marques, fleeing into the woods where she is found, face up in the river, by  Don Alfredo Corledo (Clifford Evans), an empathetic patriarchal figure. 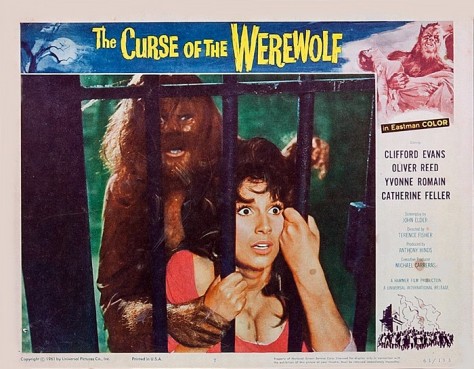 Corledo’s servant Teresa (Hira Talfrey, who seems more like a wife than a servant) notices that their new guest is with child and dreads the thought of the baby being born on Christmas, which, according to her tradition, is an affront to God.  Dec 25th arrives and the child, Leon,  is tragically born to a dead mother, who is  finally released from the misery of a peasant life.

In a reversal of the Christ child’s dedication at the temple,  the local priest baptizes Leon, soliciting a storm from the heavens.   Even the baptismal water reacts to the sanctifying of this  curse of birth. The water bubbles intensely and reflects the face of a gargoyle from above.  The motherly Teresa, the superstitious one, alone recognizes the sign, while the priest and Don Alfredo dismiss it.

Years later, the child Leon ventures out, tasting the sweet blood of a squirrel, killing lambs and goats.  By now Don Alfredo and the priest know that Leon suffers the curse of the werewolf and the priest warns that only love can relieve Leon from his affliction.  Surrogate parents Don Alfredo and Teresa supply that love to the boy, but as a man, Leon will need the true love of a woman, ala Beauty and the Beast, to harness the wolf.

Some reviewers have predictably commented that the first half ofCurse is slow, yet it is in the first half that the narrative is uniquely compelling.  The film unfolds like a literary fairy tale.  Once the narrative takes the obligatory horror route, in the last quarter, with a gray-furred, Henry Hull-looking lycanthrope, it feels a bit recycled, complete with the beast, atop a cathedral,  being chased by the torch carrying mob.

Still, Oliver Reed is superb as the adult Leon, registering torment far more convincingly than either  Lon Chaney, Jr. or Benicio Del Toro.  Hira Talfrey  and, especially, Clifford Evans are equally accomplished as Leon’s concerned guardians.  There are genuinely effective moments of tingling suspense, such as Leon’s cornering an unfortunate prisoner in a cell.  Leon’s virtuous fiancee is his potential salvation, but the animal side of Leon emerges once he ventures out from his sanctuary into a hedonistic society; after which there is, literally, hell to pay.

Curse of the Werewolf is a fine example of a director who utilized a genre for his own aesthetic expression, much the same way that Rod Serling utilized science fiction for his own expressionist gain.