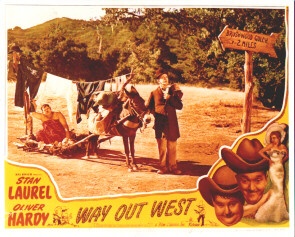 Stan Laurel and Oliver hardy were, without question, the most successful comedy team in Hollywood history. Not only were they artistically and financially successful but, unlike Abbot and Costello or Martin and Lewis, who pale in comparison, Stan and Ollie actually got along personally because they had a smart approach to their collaboration; for most of their career together they did not associate with each other off-screen.

Stan was certainly the creative end and stories abound about his dedication to his work (and neglect of his multiple wives). Stan often co-wrote the films, produced, co-directed and oversaw editing (usually uncredited). Indeed Stan and Ollie’s career together actually began with Stan directing Ollie in a number of shorts. For Stan Laurel, work was often from dusk til dawn. 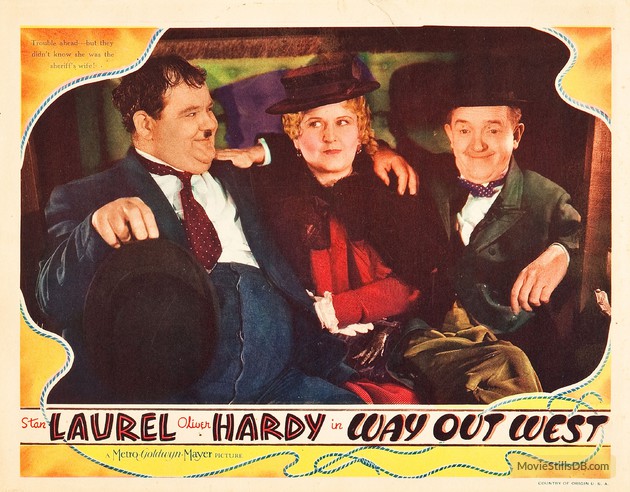 Oliver Hardy had a much different approach. For him, work was essential, but it was still a 9 to 5 job. Once the day was done, he bid Stan and crew good-bye and went home to play sports with family and friends. Ollie was perfectly content with Stan being the creative end and whenever he was asked a question regarding the film work he usually said, “Ask Stan.”

It was not until the last few years of their career that Stan and Ollie got to know each other on a cruise to England. Both lamented that they had not done it earlier, but they  knew the value of their partnership. Upon Ollie’s death, Stan suffered a nervous breakdown and vowed to retire from film. Despite many offers of work, Stan kept to that promise until his death eight years later. 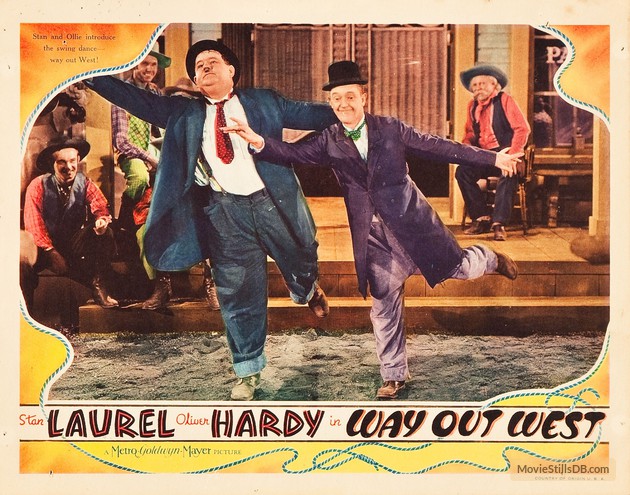 They both had solo careers before teaming up. Ollie’s early history was slightly more diverse than Stan’s. He had played the Tin Man in Larry Semon’s god-awful version of The Wizard of Oz (1925) and a loathsome western murderer/rapist in No Man’s Law (1927), but most of his roles were comedic. Stan’s solo career was almost entirely comedic, but, alone, neither of the two could not make a dent in already crowded field.

Harry Langdon and Vernon Dent were the closest thing to a male comedy team, but Langdon was too egotistical fo  a full-fledged partnership, and always saw to it that his name came first in the credits. Langdon was a bit of a prototype for Stan Laurel, and certainly influenced Stan’s development of the perennial man-child characterization; but, wisely, Stan learned from the lessons of Langdon’s career mistakes and jettisoned any hints of sexuality (audiences were, and still are, uncomfortable with the idea of a dark hued amorous man-child).  Laurel also holstered his ego, allowing Ollie equal billing.  Unlike Langdon, Laurel easily made the transition to sound.  Later, after Langdon’s fall from grace, Harry, who had influenced Laurel, now found himself being influenced and sought to establish himself and Dent as a comedy team, not unlike Laurel and Hardy, but by then Laurel and Hardy had the market and Harry’s efforts were quashed.   In 1939 Hal Roach Studios teamed Oliver Hardy with Langdon during a contractual dispute with Laurel.  Zenobia was a onetime only effort.  The teaming did not gel with audiences or critics.  Soon, Ollie and Stan were reunited, but Stan did employ Langdon as a co-writer in several ventures. 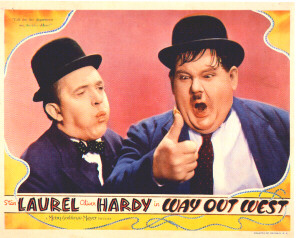 Ollie’s character is uniquely original.  He bears no resemblance at all to Vernon Dent.  Dent was a more diverse character actor, but failed to establish an ongoing screen identity.  Oliver Hardy was also an accomplished singer as can be seen in Way Out West (1937 Dir. James W. Horne) and a handful of hard to find recordings.

Stan Laurel was a big fan of westerns and even produced a series with Fred Scott as a singing cowboy.  The series lost a lot of money, but Stan only abandoned them after he could no longer afford to make them.  This love of the genre lead to Way Out West and, along with Sons of the Desert (1933), it is one of the duo’s best features.  The rest of Laurel and Hardy’s features simply did not measure up to these, and their shorts and the last features at 20th Century Fox were quite poor (Laurel had no creative control over them). 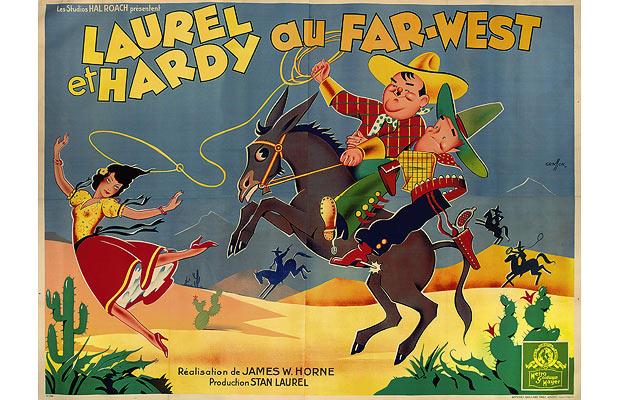 The plot of Way Out West is threadbare.  Stan and Ollie are on their way to Brushwood Gulch, a one-horse town, to deliver a deed to a gold mine to one Mary Roberts (Rosina Lawrence) from her deceased father.  Stan and Ollie have an unfortunate mishap in a creek and are forced to hitch a ride on a stagecoach.  Stan stops the stagecoach by imitating Claudette Colbert in It Happened One Night(1934), lifting his pant leg for the driver.  Once inside the coach, Ollie pesters a female passenger (Vivian Oakland): ” A lot of weather we’ve been having lately.” 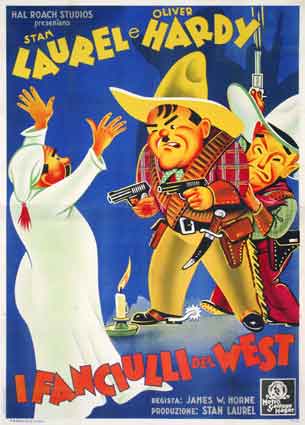 The passenger turns out to be the wife of the Sheriff (Stanley Fields) and, after she complains about the duo to her husband, he warns Stan and Ollie to be on the next stagecoach out of town.  Upon entering the saloon where Mary works, Stan and Ollie engage in a charming soft-shoe dance, accompanied by the Avalon Boys, who were a bit like the Sons of the Pioneers.

Bar owner Mickey Finn (James Finlayson, a Laurel and Hardy regular) tells Stan and Ollie that he is Mary’s guardian and will go fetch her.  The scheming Finn grabs saloon singer/partner Lola (Sharon Lynne) and passes her off as Mary to the boys.  Lola plays her part and tearfully asks if her Daddy is really dead. “We hope he is,” says Stan, “they buried him.”

Deed delivered, Finn tells his bartender to give the boys some champagne.  The boys break out into a song, “Tail of the Lonesome Pine.” and do it with such infectious enthusiasm that its classic status is justified. 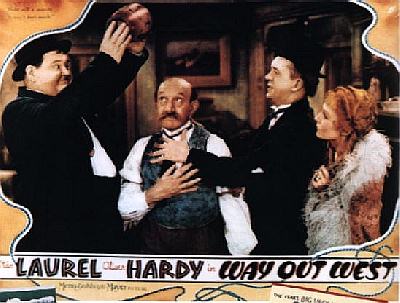 Stan and Ollie soon discover the ruse , attempt to get the deed back and are run out of town by Finn and the Sheriff.  The boys vow to get the deed to the real Mary and return by night to do so.  Of course, this development opens the door for the usual slapstick, which Stan and Ollie do with their normal finesse. 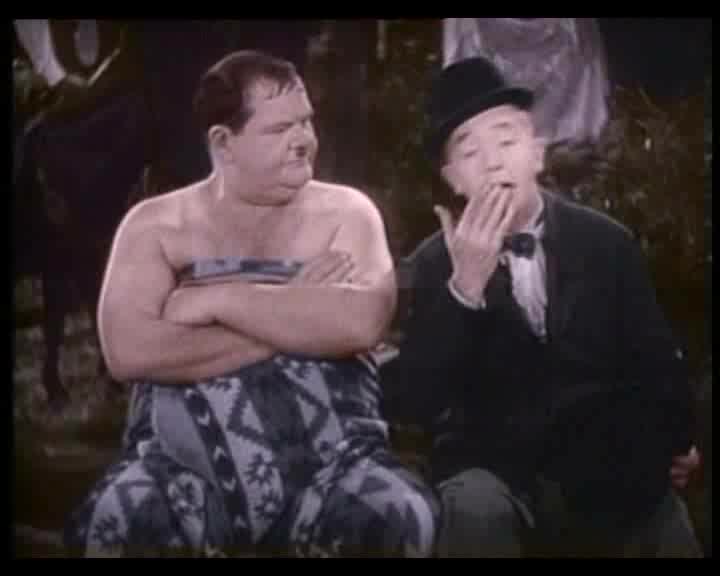 All ends happily with Mary and the boys heading south, singing “Dixie.”  It’s a great ending.  Unfortunately, it is also almost the last time Laurel and Hardy will approach greatness.  A few good features followed, but the less said about the last ten years, the better.  Laurel and Hardy became Hollywood icons and deservedly so. Way Out West is a great way to remember them and celebrate their art.