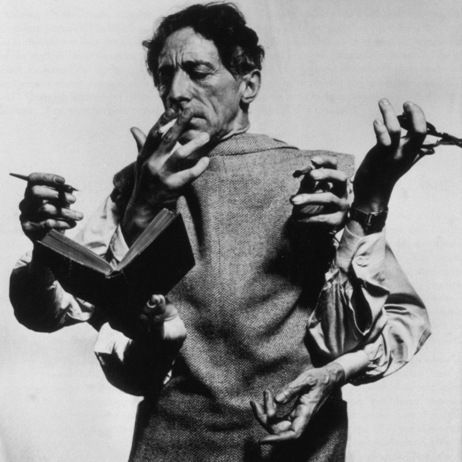 The late critic Leslie Halliwell wrote of Jean Cocteau’s Orpheus(1949): “It is the closest cinema has gotten to pure poetry.” The same might be said of Cocteau himself. Poet, painter, filmmaker, librettist, historian, stage designer, and playwright, Cocteau refused to be confined to the parameters of a single artistic medium. His circle of friends and collaborators included Pablo Picasso, Kenneth Anger, Serge de Diaghilev, Les Six, Igor Stravinsky, Marcel Proust, and Erik Satie. He was a dominating figure in virtually every “ism”, including Dadaism and Surrealism. Cocteau only made six movies, and insisted that he was merely an amateur who “dabbled” in the medium. Despite his self-proclaimed amateur status, four of those films are frequently hailed as masterpieces of cinema. These four have been collectively given the Criterion treatment. 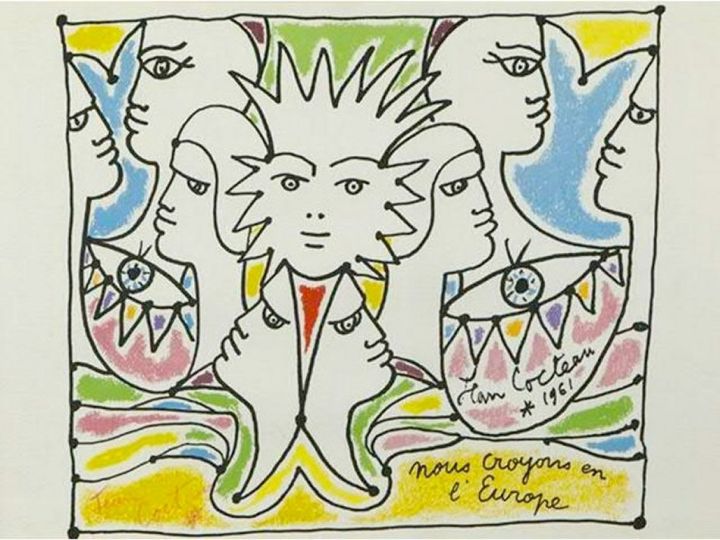 Blood of a Poet (1930) was Cocteau’s first film. It is often compared to Luis Bunuel‘s Un Chien Andalou (1928) and L’ Age d’ Or (Blood was, in  fact, financed by the same patron as L’ Age d’or). Yet, Blood of a Poet is its own film, having a texture unlike any before or since. It is, possibly, the weakest of the four on the Criterion set. Despite it’s stage bound milieu, it remains bewitching, startling, and memorable even after the passage of 80 years. It features absurdist mythology and is semi-autobiographical, told in four life episodes. The artist, searching for his muse, is martyr to his art. Cocteau narrates, surrealist Lee Miller plays a statue and Les Six member Georges Auric composed the music. Mirrors are passageways into an inner world, a theme Cocteau would perfect in Orpheus(1950). Budgetary limitations led to improvisation, which worked to the film’s advantage. Upon release, the film was attacked from different corners. Andre Breton and his Surrealist circle were aggressively hostile, obviously fearing a coup d’etat[1]. Coming on the heels of L’ Age d’or, the Catholic Church read an iconoclastic message into Blood, threatening the producer with excommunication, which resulted in a delayed release. In hindsight, this is surprising since the main thrust of the film, which comes through the multifariously interpreted imagery, mostly conveys the artist in the spiritual realm.

Cocteau was nearly sixty in 1946 when he made his first feature-length film, Beauty and the Beast (based on the children’s story by Madame Leprince de Beaumont). Inspired by Gustave Dore’s engravings and the naturalistic paintings of Johannes Vermeer, Beauty and the Beast is sensual, frighting and enchanting in the way only a childhood fantasy can be. It is more aesthetically assured than Blood of a Poet, greatly assisted by Henri Alekan’s exquisite black and white cinematography, Georges Auric’s enduring score, and Christian Berard’s production design, costume and makeup work. Disembodied hands light the way to the Beast’s elegant castle with candelabras. Animated statues convey amusement and dread. Mirrors, doors and jewelry are constant elements of Cocteau’s world. Cocteau and company play with the gifts of the medium, but it is more than a mere display of cinematic trickery. Everything serves the mythical narrative. Stark and magical compositions are the result of a highly collaborative work with unified purpose. According to Cocteau’s diaries, the collaboration was not as seamless as the film appears. Apparently there was much tension between the director and Alekan. Cocteau, knowing nothing about the camera, preferred flat, artistic compositions. Alekan resisted such an approach and pushed Cocteau to think in more classical cinematic language. 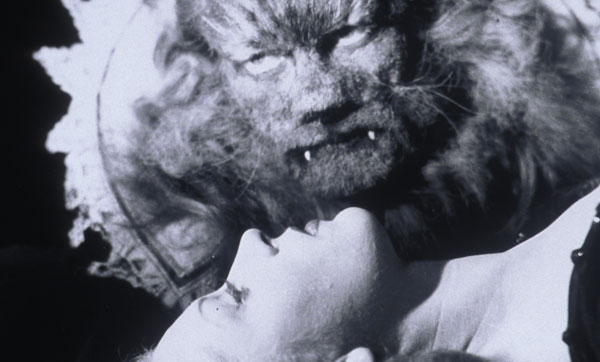 Jean Marais’ Beast acts almost entirely with his eyes (peering from behind lycanthrope-like makeup). He conveys pathos, wretchedness, latent savagery and erotic yearning in a tour-de-force performance. His Beast is threatening, and more compelling than the civilized Beast of the later Disney version. Josette Day, beautifully adorned in soft focus, is the maternal, poetic Belle, making for striking contrast with both the smoldering Beast and her bourgeoisie siblings. Some believe Beauty and The Beast to be Cocteau’s most perfect work, and the Criterion Collection treats it as such, with superb extras, including an interview with Marais filmed shortly before his death. For those so inclined the film can also be watched scored to Philip Glass’ pointless and banal operatic treatment. 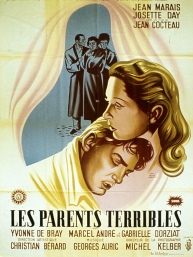 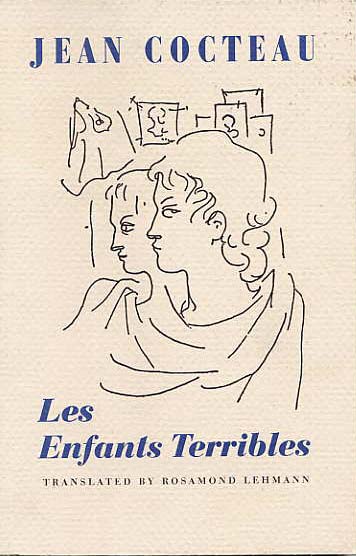 Cocteau collaborated with Jean-Pierre Melville for Les Enfants terribles. There has been impassioned debate since regarding who directed what. Based on Cocteau’s 1929 novel, the film is a curious amalgam of both artists. Visually, it has the movement of Melville (whose second feature this was). However, the dream-like narrative is, of course, entirely Cocteau. The casting of Cocteau’s lover (Edouard Dermithe) is a noticeable flaw (he can’t act), as is the unnecessary narration. Still, the film has a classic status. 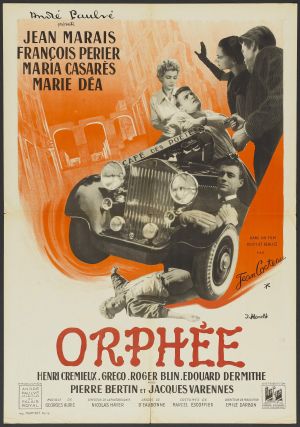 The magic of Orpheus (1950) lies in it’s sharply realized poetic, enigmatic narrative. Here Cocteau’s obsessive theme of autobiographical, fantasied myth finds its most fluid expression. Jean Marias is a contemporary Orphee.  The Greek legend here is a narcissistic poet in a trendy cafe during postwar France, neglectful of his naive wife Eurydice (Marie Dea). Death (Maria Casares) arrives on the scene, accompanied by her chauffeur and motorcyclist messengers.  Cocteau’s bold, innovative imagining of a very old tale as a idiosyncratic love triangle is, by turns, gritty, chic, iconographic, and iconoclastic. Casares’ ardent portrayal of the Grim Reaper Princess is cryptic, almost akin to free jazz. Cocteau uses simple effects in the style of Georges Melies to weave a complex story. Again, mirrors and gloves are passageways to the netherworld. Cocteau utilizes WWII ruins to craft an ethereal aura, critical of contemporary social ills. References range from French Resistance radio to rock-n-roll in its infancy. George Auric composed the score.

Testament of Orpheus (1960) was Cocteau’s last film, and is even announced by the artist as such. Cocteau is not above milking that fact when he informs us that he will be sad if we don’t like it. Naturally, this is not a sequel to Orpheus. Cocteau was too much the artist to succumb to anything like Hollywood’s pedestrian “let’s make the same film again” concept. Essentially, it is a self-portrait with the aged Cocteau, as an 18th century poet, lethargically ambling through his own mythology. Painter Pablo Picasso and actor Yul Brynner make cameos “not because they are famous, but because they are my friends.” Characters for Blood and Orpheus turn up as Cocteau “plays the buffoon” in his search for divine wisdom. Cocteau dips into his bag of tricks for this final installment into what others have labeled his Orpheus Trilogy. Though not the equal of his earlier film, it is a fitting swan song and, indeed, a testament to Cocteau’s body of work.

Included in the extras on the Testament disc is Cocteau’s amiable 16mm home movie, La Villa Santo Sospir (1952). It  a dreamy travelogue, honing in on the director’s villa, decorated by himself with a little help from Picasso. A few of Cocteau’s later works on canvases makes one pine to see more. 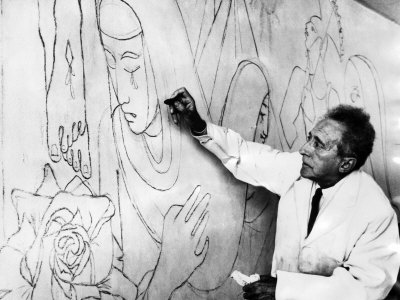 One thought on “THE FILMS OF JEAN COCTEAU”