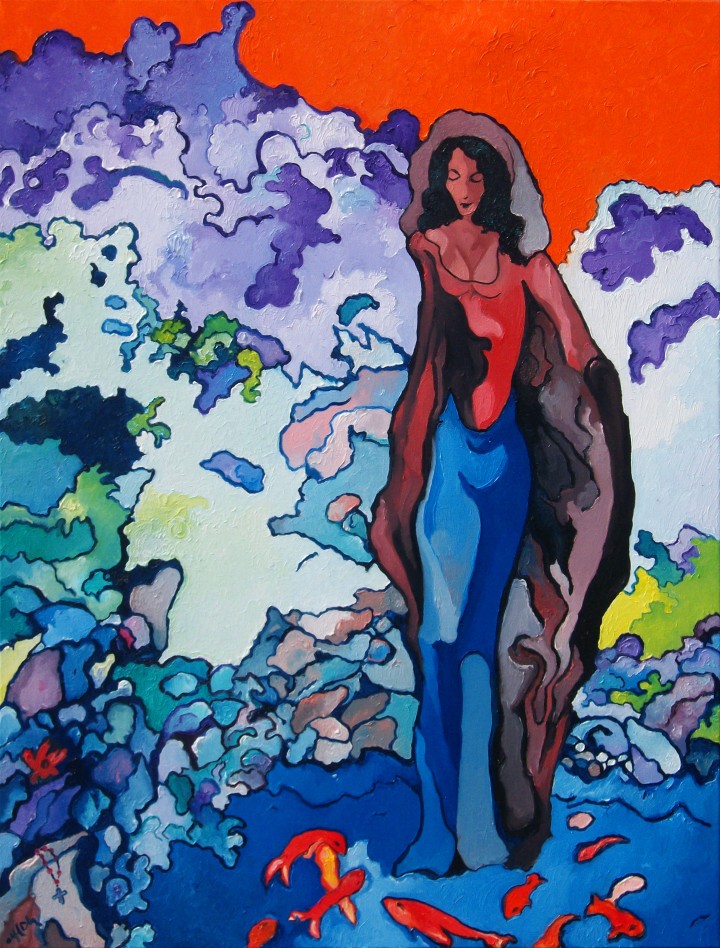 “Our Lady Of The Mermaids”©2011 is a 3 ft x 4 ft oil on canvas. Over the years, I have painted numerous Madonnas, born full grown from a painter’s brow, yet I feel it is this one alone, from 2011, in which my very personal tradition and theological tenets crystallized most lucidly. I have attempted, since then, to paint her again as I did here. Predictably, it has proven futile. Although, Our Lady wears a thousand different skin tones, a thousand names, and a thousand costumes, she stands uniquely untamed in this canvas. This is no Madonna, subjected to patriarchal erasure, no demure, chaste cabbage. Our Lady is imbued with wild sensuality, diaphanous compassion, and revolutionary divinity. She is our lush, boundlessly expansive sanctuary of fearless truth-telling; the fiery daughter of primal white goddesses and Sophianic Mother of the brown mermaids.

* Our Lady was chosen for the 2014 cover of Aurora Literary Magazine.

“Annihilation” is a 2014,  40 x 48 oil on canvas. It stems from Sufi meditation. “Christ casting the money changers out of the temple” is that figure’s moth to the flame moment. It is the only time we see the gospel figure losing his temper and it is this act, which gets him killed and inevitably transforms him. It is lack of love that Christ is responding to. Rather than the traditional depicted action narrative, usually attached to the subject, “Annihilation” is filtered through Le Pointe Vierge; the innermost secret heart. 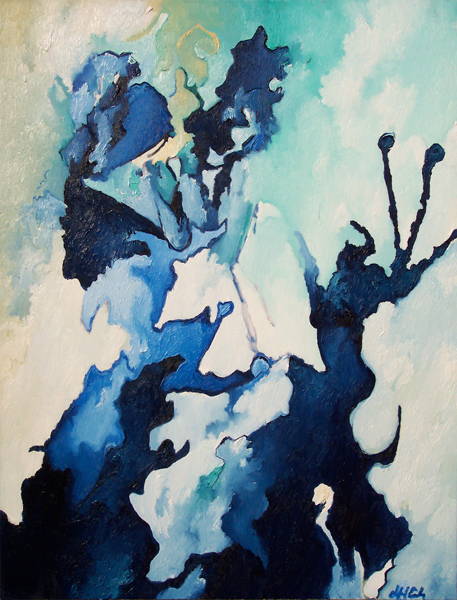 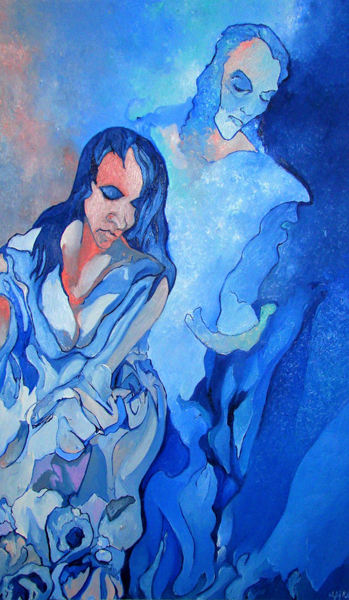 “Annunciation” is a 2011, 3 ft x 5 ft oil on canvas, painted while I was in grad school seminary. It is the prologue to the Magnificat. The Marian figure is young, ethnic, sensually caught up in her mystical hour, manifested through the celestial visitor. 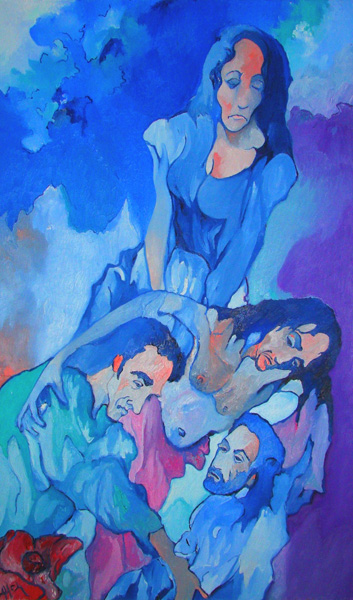 “Pieta” is one of numerous oil on canvases (3 ft x 5 ft) I have painted on the traditional subject. This interpretation is from 2011, and directly followed the above “Annunciation.” The same figure is aged approximately thirty years. Again, she is endowed in her Hour. Her Son, reduced to Corpus Christie, is being lifted to Her by John the beloved and Joseph of Arimathea.The author of the Beatitudes is clearly the son of the Magnificat’s author. In the gospel narrative, Christ cried out to His Father: “Why have you forsaken me?”  Father turned His face from Son. Yet, Mother faced Her son directly. As painful as it was, She did not look away. She did not forsake Him and wears a shirt of arrows for Him.

“Stations IV. Christ meets His Mother On The Way To The Cross” is a 2011 oil on canvas and on of six Station paintings. All are 5 ft x 5 ft. Again, I dispense of a narrative per se and channel the event through a purely emotional, almost musically mystical filter. This is a homage to the teachings of Fr. Justin Belitz.

“Barenboim conducts the Bruckner 7th” is a 2014, 3 ft x 4 ft oil on canvas. It is a reinterpretation from a sketch I made during a Chicago concert of that symphony, conducted by Daniel Barenboim in the 1990s. The 7th is the most personally mystical of Bruckner’s symphonic output. Barenboim is a pronounced romanticist and a visceral Brucknerian, shaping the composer’s intimate sanctuary.

“Pieta” is a 58 x 48 oil on canvas from 2014. Revisiting the subject, I concentrated on the relationship between the Madonna and Her slain Son in a celestial, communal setting. 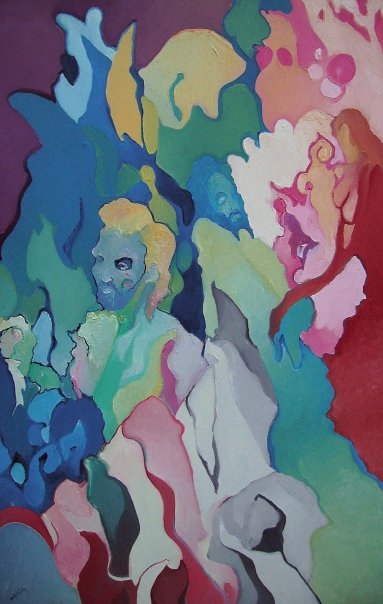 “Yellow Resurrection” is a 30 x 48 oil on canvas from 2008 and an entirely different variation of previous Pieta-like themes. My BlueMahler character serves as a narrator, composing an exotic interpretation of the Easter theme. 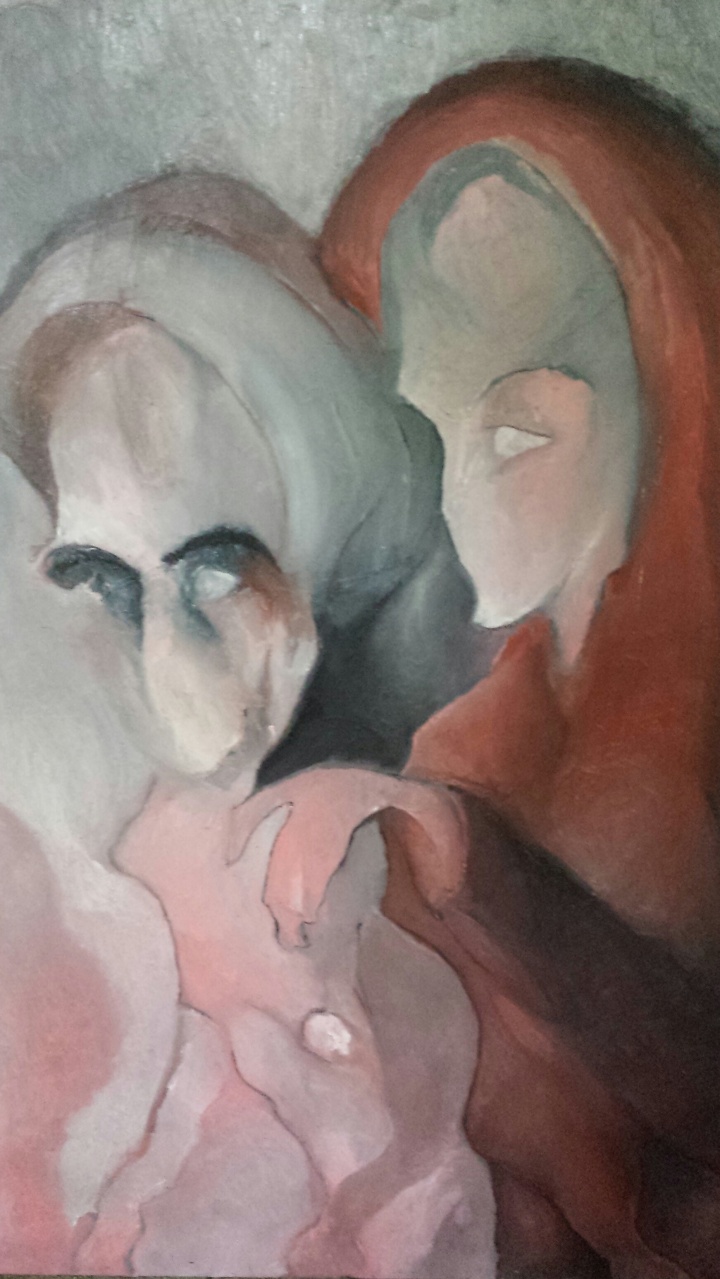 “Christ and the Woman at the Well” is a 2014, 3 ft x 4 ft oil on canvas. It is painted in monochromatic hues. No water well is depicted. I forgo a narrative in favor of an emotional interaction. Although Christ is recognized as prophet, He learns from her. She teaches him her humanity and it is a vulnerable sharing. 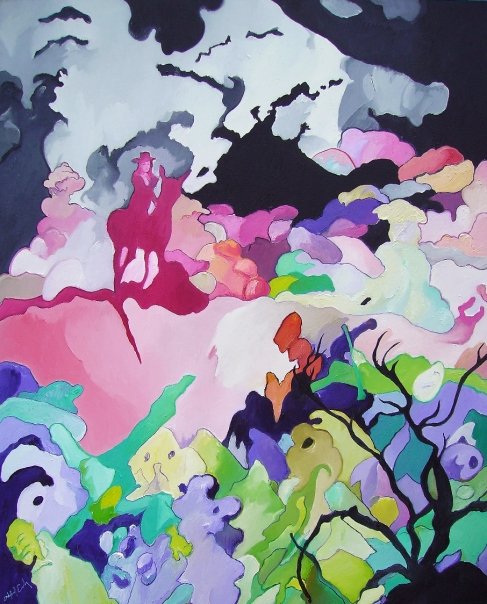 “Escape To A Mysterious Freedom” is one of several paintings inspired by my time in New Mexico. It is a 2007 oil on canvas and depicts a lone, female rider. It is a surreal variation of Gauguin’s Riders On The Beach. The woman is on a tension-filled promenade and the freedom which awaits her is an unknown one. I had read St. John of the Cross’ “Dark Night Of The Soul’ shortly before painting this and that certainly factored in.

“Prayer For A Perilous Descent” is a 45 x 60, 2007 oil on canvas and companion piece to the previous painting. A family is depicted: A mother and father, shielding their children, through a perilous descent while Holy Mother prays for their safety. 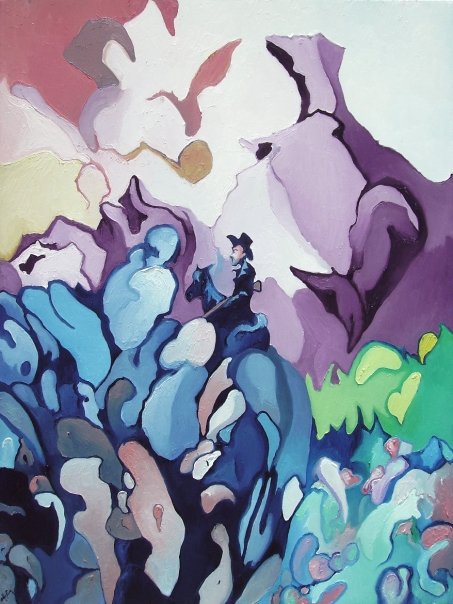 “Blue Fugue” is another 2007 companion to “Escape To A Mysterious Freedom”  and is 3 ft x 4 ft. St. John Of the Cross and Gauguin inform the painting’s theme and milieu. A lone, male figure rides into a terrain of infinite shadows.

“Passion of Perpetua and Felicity” is a  30 x 40, 2008 oil on canvas, taken from a gnostic text of martyrdom. It is a literal, narrative interpretation, but one saturated with paradoxical emotions, including divine eroticism.

“Married In the Faucet” is a 3 ft x 4 ft 2007 canvas, named after a line from a poem by John M. Bennett (who acted in two of my films. He was Satan in “Jesus and her Gospel of Yes” and George H. Bush in “W.”) The BlueMahler character is depicted in an unconsummated marriage. 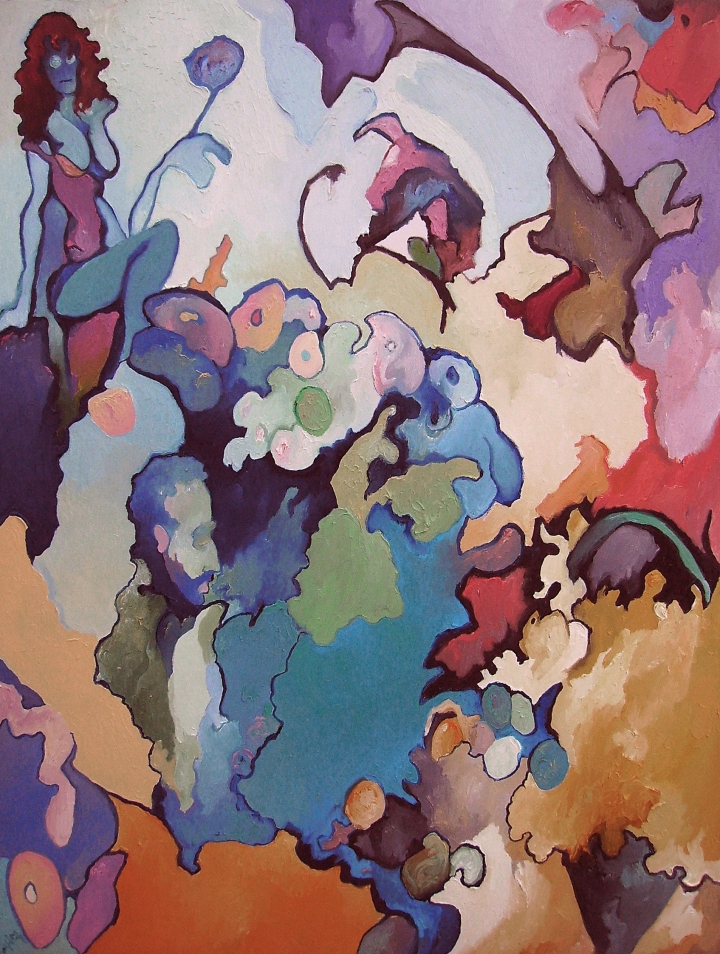 “Finger Paint Viscosity” is a 3 ft x 4 ft, 2007 oil on canvas, named after  Cheryl Townsend poem (Cheryl played Jesus in my “Jesus and her Gospel of Yes” film). BlueMahler conducts the non-narrative narrative (as he did in the film). Cheryl herself is depicted. Her form echoes the eroticism inherent in her words. There is an Alexander Scriabin-like insect quality to her sexed-up figure. * All paintings are for sale. For pricing, serious inquiries may contact us at: pinkfreudbluemahler@msn.com 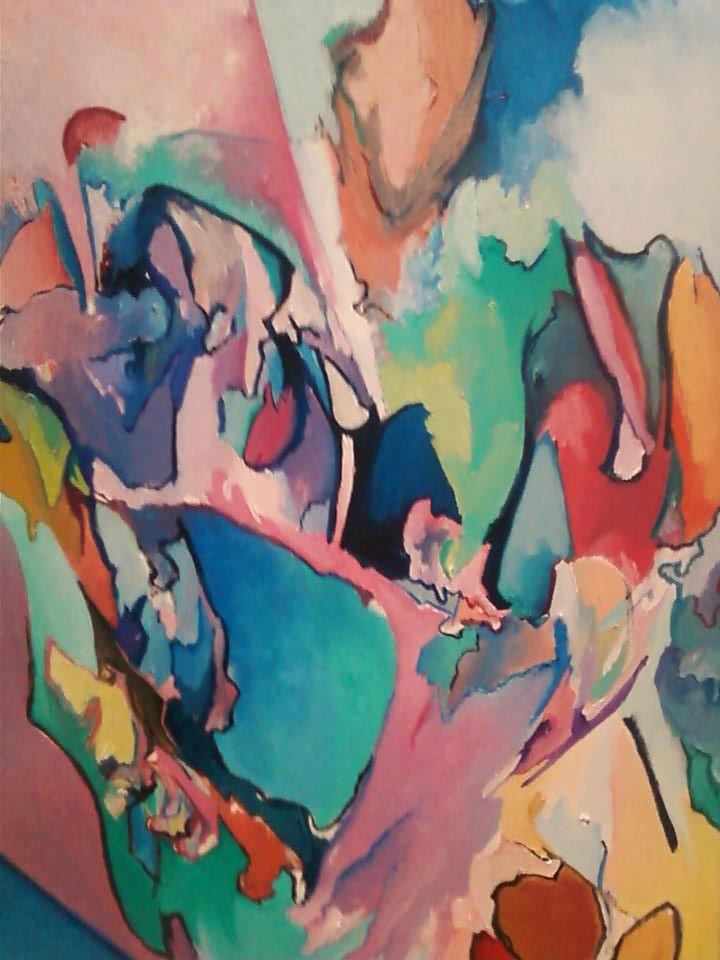 “Hay que caminar, soñando “is a 40 x 60, 2013 oil on canvas, named after a musical composition by Luigi Nono, translated (roughly) as “Wanderer, there is no destination, but you must travel the road.”

“Risonanze errant” (Resonances wandering) is a  x 33 x 52, oil on canvas from 2013, named after a musical composition by Luigi Nono. 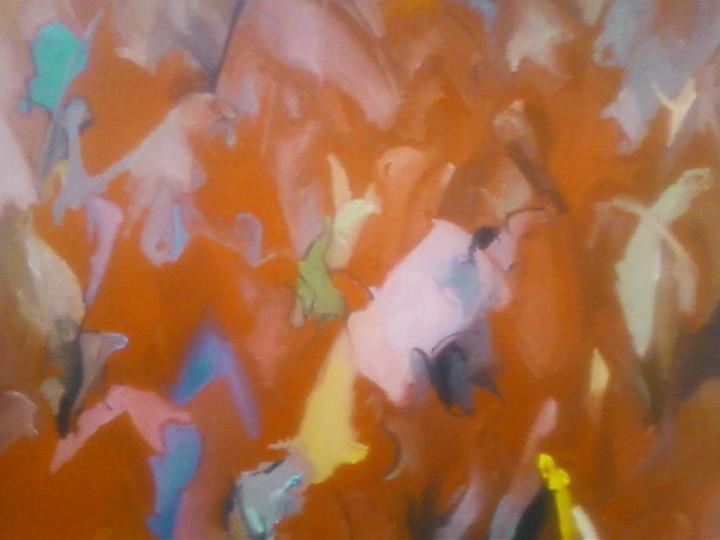 “Omaggio a Luigi Nono” is a 3 ft x 3 ft oil on canvas, and homage to Luigi Nono. 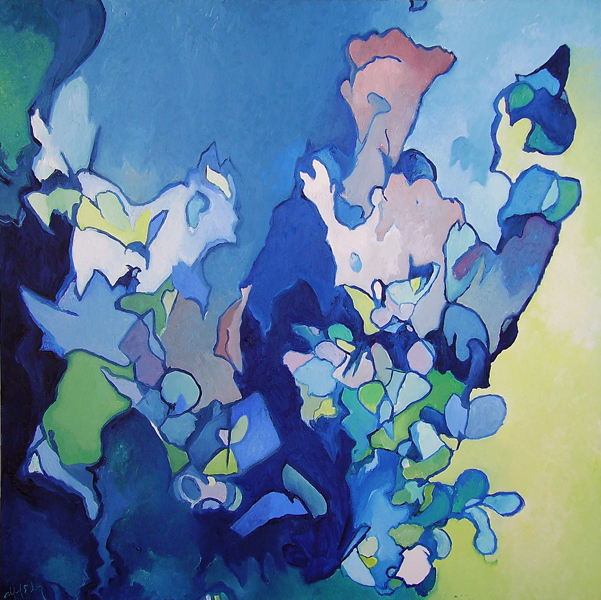 ** A portion of all sales will go to the Franciscan Hermitage.

One thought on “Alfred Eaker Paintings”