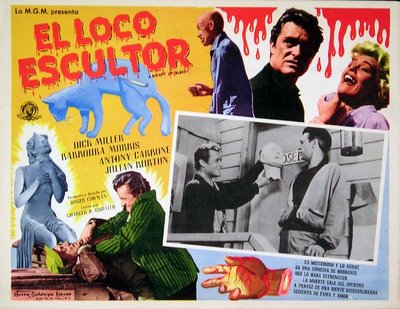 The Roger Corman cult favorite Bucket of Blood (1959) was ahead of its time, literally pioneering the phrase “supplemental feature.” Having finished A Bucket of Blood ahead of schedule, Corman fashioned his supplemental material in a second cult favorite feature, Little Shop of Horrors (1960), shot on an old Charlie Chaplin set.  As a producer, Corman’s oeuvre is, naturally, outrageously varied, from Z-grade potboilers to arthouse films. Corman’s output as a director was almost as varied, but the quality of his work took an improved turn with this film (with no small assistance from writer Charles B. Griffith, who also penned Shop). Corman’s directing career essentially ended with 1971′s Von Richthofen and Brown, although he returned nineteen years later  for Frankenstein Unbound (1990), which was mostly panned. Like the director himself, Frankenstein Unbound may be underrated; as underrated as some of Corman’s Poe films are overrated. 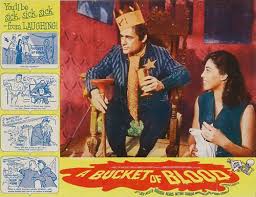 Producers Samuel Z. Arkoff and James Nicholson challenged Corman to break his own record of a six day shoot, quality be damned. Despite the five-day shoot, Bucket of Bloodremains one of Corman’s best efforts. It is essentially a reworking of House Of Wax (1953) transplanted to a beatnik coffee shop. Dick Miller (in his only starring role) plays the geek busboy Walter who wants to become as hip as the beatniks, poets, jazz musicians, and artists at the Yellow Door Cafe. Walter not only want to impress his customers, but also his unrequited love: hostess Carla (Barboura Morris). He gets his opportunity when he accidentally kills a cat, panics, and covers up the evidence in clay. He becomes an artistic sensation. Before you can say “Sweeney Todd,” Walter’s next masterpiece is of the two-legged mammalian variety. An irksome detective joins the list of victims turned masterpieces; and, naturally, Walter’s posthumous fame will supersede his homicidal proclivities.

Although Griffith’s humor is obvious and caters to two-dimensional stereotypes of artists and beatniks as insufferably pretentious, the movie wins due to admirable cynicism in the writing, combined with Corman’s staid directorial style and a cast with personality. Although Little Shop of Horrors is probably the better film, Bucket of Blood has earned its status as an authentically quirky cult film.  What may be Corman’s most ambitious “B” film was three years away: The Intruder (1962), a different type of horror altogether.