The films of Andre De Toth are slowly being paid their due recognition in the DVD market. As prolific and versatile as De Toth was there are, of course, hits and misses. While some of De Toth’s weaker films, such as The Stranger Wore a Gun (1953) and The Indian Fighter (1955), are readily available, other, far more notable works such as Ramrod (1947) and The Bounty Hunter (1954) still languish in obscurity. De Toth is best known for being the one-eyed director of the 3D House of Wax (1953), the noir classic Crime Wave (1954), and as one of the great Western revisionists of the 1950s (he wrote the story for 1950′s The Gunfighter).

Snow sets the extraordinarily bleak tone in Day of the Outlaw, even more than it did in De Toth’s previous Springfield Rifle (1952). Here, as is often the case in a De Toth film, an older hero is at the center of the story. Blaise (noir fan favorite Robert Ryan) and Dan (Nehemiah Persoff) are traveling to the aptly named town of Bitters. They are frostbitten and struggling to move through the thick snow drifts. Blaise whips his horse with determined intensity. The horse stumbles lethargically. Blaise, a rancher and gunfighter, is furious over the barbed wire fence that has been put up by farmer Hal Crane (Alan Marshal) and vows to kill Crane. A very tired Dan tells Blaise (in a hoarse voice), “A wire fence is a poor excuse to kill a man.” Blaise’s motive runs deeper. He has been having an affair with Crane’s wife Helen (Tina Louise).

The scene shifts from the seemingly endless snowy abyss to a claustrophobic saloon where, it seems, confrontation looms. First, Helen confronts Blaise. She tells him the affair is over and warns him not to harm her husband. Blaise promises nothing. Blaise then confronts Hal, provoking an inevitable showdown. Blaise represents the seasoned renegade spirit (a frequent De Toth theme) at odds with the arrival of civilization in the form of younger, weaker men (Hal and the farmers). 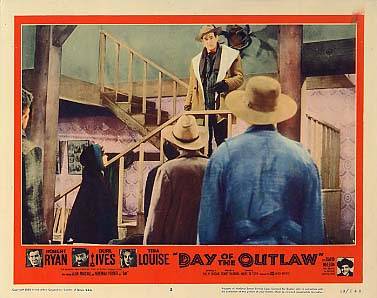 Despite Helen’s pleas, Blaise fully intends to kill Hal. She reprimands Blaise for his lack of mercy. “You won’t find mercy anywhere in Wyoming” he retorts. Bitter indeed. Blaise is about to leave Helen a widow and rid himself of an annoying farmer, but he is suddenly interrupted by a true threat in the form of outlaw Jack Bruhn (Burl Ives) and his gang. At this point, De Toth’s narrative takes a dramatic and refreshingly unexpected shift.

Bruhn, like Blaise, is a dying breed—literally dying, from a gunshot wound received in a recent bank robbery. Stark tension permeates Day of the Outlaw as Bruhn faces certain death while struggling to maintain control of his gang and the situation. The claustrophobia is a prison for both Bruhn and Blaise. They engage in a battle of wills while finding an uncomfortable identifying ground. Both men discover their own fallibility in the process and willingly take a contrarian, fatalistic course of action, which shifts the narrative to its bleak and cynical finale.

The final quarter of the film is replete with desolate symbolism. Insatiable greed is juxtaposed against Russel Harden’s sumptuous camera capturing the merciless, ominous landscape. Underneath the shifting terrain lies a steely goal of self-obliteration. 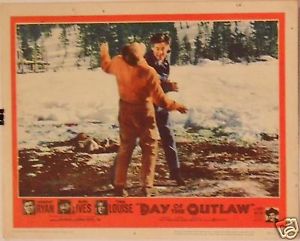 Day of the Outlaw stays with you long after the credits have faded, imprinting an indelible image of coarse whites. It may indeed be De Toth’s finest work, and that is saying quite a bit.