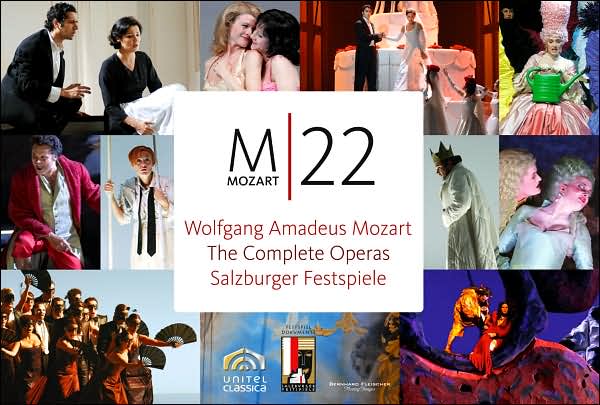 Director Joachim Schlomer undertook what may have been the most ambitious project of the entire M22 Salzburg Mozart Festival in 2006.  Over the course of three evenings, Schlomer presented Odysseys(Irrfahrten).  Schlomer begins the first evening of his odyssey with an early Mozart opera, La finta semplice. This is the starting point of a challenging journey with the composer, as filtered through Schlomer’s vision.

In 1769 the twelve year old Mozart composed his three-act opera buffa La finta semplice (The Pretend Simpleton) to a libretto by poet Marco Coltellini, which was in turn based off of Carlo Goldoni’s comedy.  It is one of the most appetizing of Mozart’s early operas.

Captain Fracasso and his sergeant Simone are stationed at the home of two wealthy, foolhardy brothers: Don Cassandro and Don Polidoro. Cassandro and Polidoro have a sister, Giacinta, with whom Fracasso is smitten.  Simone is chasing after the maid, Ninetta. Cassandro, a notorious misogynist, is continually at odds with his womanizing brother.  Fracasso’s sister, Rosina, arrives to help her brother and, with Ninetta’s assistance, Rosina attempts to seduce both Cassandro and Polidoro.  Rosina plays the part of a sexy simpleton, and she is quite successful with Cassandro.  After a night of much drinking, the brothers quarrel over Rosina (leading to a comic duel).  The quarreling is followed by dizzying amorous intrigue and romantic mix-ups.  The brothers are lead to believe that Giacanta has run off with Simone and taken the estate’s treasure with him.  Finally, Rosina, Giacanta and Ninetta end up with their chosen lovers. Only Polidoro walks away empty-handed, which leaves him happily single and unfettered. 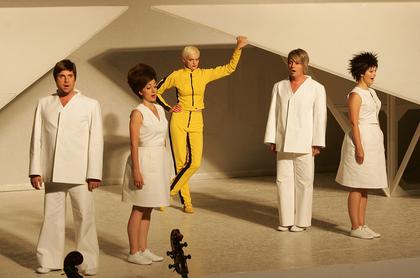 Schlomer’s trilogy, beginning with La finta semplice, is not an odyssey for the simpleton, or the timid Mozartean opera goer.  Refreshingly, his is a richly complex, adult odyssey, which encompasses determination, crisis, confusion and eventually, possible liberation.  In La finta semplice, Schlomer replaces the recitatives with German narration (the original, Italian arias are retained).  The result here is an extraordinary tightening of the lyrical and farcical experience.  The new dialogue is delivered by an additional character named Auctoritas, hypnotically played by actress Marianne Hamre (in a bright yellow body suit, which the actress wittily referred to as her ‘Kill Bill’ costume).  Hamre’s characterization embraces Brechtian concepts, acting out the narration and interacting with the opera’s characters.  With the exception of Hamre, the sets and costumes, designed by Jens Kilian, are minimalistic and devoid of color: bridal whites.  Malin Hartelius, as Rosina, commands the triangular stage.  Another addition, “Dark Rosina” (played by Anna Tenta), is a mute appendage who amusingly, and hauntingly, choreographs Rosina’s movements, until Rosina frees herself.  The Act II love duet between Rosina and Cassandro (Josef Wagner) is capped by an off-the-meter amorous dance.  Schlomer, a notable choreographer and dancer himself, intelligently directs Hartelius: she sings one thing, but dances another, acting out the Rosina underneath the simpleton facade.  The duel between the brothers becomes a battle of animated weapons.  It is so unexpected and surreal that you half expect Yosemite Sam and Bugs Bunny to show up.  Silvia Moi (Ninetta), Jeremy Ovanden (Fracasso), Matthisas Klink (Polidoro, who, in this version, does get a girl—the narrator Hamre), Marina Comparato and Mijenko Turk make up the rest of a cast with vibrant personality (how about red bras and body paint to off-set the virginal white?).  Michael Hofstetter conducts the Camerata Salzburg as if he and his orchestra get the joke. 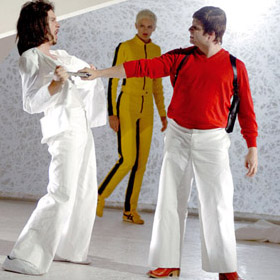 Abendempfindung (Evening Sensation) is the second evening of Odysseys. This is not an opera at all, but a pasticcio of Mozart arias, music (including works for glass harmonica), and letters.  The legendary soprano Ann Murray plays “the Singer,” the first of three allegorical characters that represent the artist Mozart at a dissatisfied stage in his life (culled from depressing letters he wrote while in Salzburg).  More than that, the three symbolize the life struggles of artists in the world.  Marianne Hamre is the second representation (“the Actress”) and Graham Smith the third (“the Dancer”).

Murray’s delivery of the Abendempfindung aria is sensitive and blue.  Perched on a suitcase, she contemplates suicide as a way to change trajectory.  She is dependent on others and longs for complete freedom, which does not come with financial security.  This meditative theme is continued by the actress and dancer.  The three principals, each through their unique artistic expression, convey a wistful defiance in the onslaught of challenges.  Ethereal, digital imagery is hauntingly utilized to echo their fractured plight.  Hamre’s radiant dive in a pool strikes a gossamer note.  Rather than a concise narrative, Abendemfindung draws the viewer into strangely intimate visuals and emotive fragmentation.

The third evening, titled Rex tremendus, combines two unfinished Mozart operas–Lo Sposo deluso (The Disappointed Bridegroom) and L’ Oca del Cairo (The Cairo Goose)—together with movements from the unfinished “Requiem.”  Mozart scholar Erik Smith gave the first prepared performance of the unfinished operas several years ago.  InBridegroom, Bocconio Papparelli plans to marry the considerably younger Eugenia, whom he has never met.  Boccino’s confidant is the misogynist Pulcherio.  Pulcherio realizes that Eugenia is actually in love with her former lover, the Tuscan officer, Don Asdrubale.  Pulcherio has sympathy for Eugenia, and he too falls in love with Bocconio.  Boccino’s vain niece, Bettina, is competing for the love of Asdrubale.  Metilda (a singer) and Gervasio (Eugenia’s tutor) are also thrown into the chaotic mix of confused romance.

The Cairo Goose tells the story of Celidora and Lavina.  The women have been imprisoned by Don Pippo.  Pippo has ambitions to marry Lavina, but she is in love with Calandrino.  Celidora is the chosen bride for Count Lionetto, but she is in love with Biondello.  Calandrino is flirting with the maid, Aureeta,which arouses the jealousy of Auretta’s lover, Chicchibio.  Biondello rescues Celidora and Lavina and, together, they escape to the garden.  At this point the opera ends without the appearance of a goose.

Schlomer and cast embrace the fragmentary nature of the works, and treat Rex tremendus as Mozartean performance art.  The cast from the first two evenings return. Again, Hamre is the M.C.  Murray dissipates as she is enclosed in the glass space of melancholic reflections.  Here, geese do briefly appear, like relics being taken to a faraway temple.  Aimlessness and confusion abound, but Hamre, having taken everything in, seems to be moving towards something.  The evening fades as Hamre emerges, dressed in a new, virtuous white.  Although she has, in part, come to symbolize the composer, it is she that we feel have come closest to knowing.  She lights a cigarette.  She is inexplicably moved in the sanctuary of the Requiem’s lacrimosa.  Of course,this sanctuary is temporary, but it will suffice.  This simple ending gives comforting flesh to the Requiem, far more than the plethora of edified iconography normally associated with the composer’s final work.  Thankfully, Schlomer and ensemble remove Mozart from his pedestal, and feel as if they are replacing the opera house with the intimacy of an concert performed in our own house, swimming pool, cafe, or a little art gallery.

Predictably, Schlomer’s vision has critics, one of whom pointedly complained that Murray’s skirt was too short for opera.  The scope of Irrfahrten never gets in the way of personality. There is nothing so predictable as an obvious, pedestrian “lesson” to be had here.  Rather, this is penetrating communion.  I wanted it to go on.  Joy in repetition.  That is something, I think.