Here are two operas composed by a fifteen- year- old Mozart. He composed the first, the dramatic serenade Il sogno di Scipione (The Dream of Scipione), for his patron the Archbishop Colloredo (with whom he later had a famous falling out with).  The music is set to Pietro Metastasio’s allegorical libretto.  The Roman commander Scopione must choose between Fortune (the goddess of earthly pleasure) and Constancy (the goddess of moral virtue).  Unable to make up his mind, Scipione presses questions in a series of existential passages.  He discovers he is in the temple of heaven.  He moves from the Elysian Fields to Elysium, where he meets the spirits of his father, Aemillius, and grandfather, Pubilius.  They advise him that duty is above all and diligence will be rewarded with beautiful dwellings.  Skeptical of mere luck, Scipione chooses the virtue of Constancy and invokes Fortune’s wrath, manifested in a great storm.  Scopione endures the elements but awakens to find the test was a dream.  Licenza praises Scopione for his steadfastness.

Director Michael Sturminger, Blagoj Nacoski as Scipione, Louise Friba as Constancy and Bernarda Bobro as Fortune flesh out the composer’s conflicting priorities in a Bunuel-esque reverie. With Mozart’s later Giovanni, familiarity breeds contempt.  Scipione is Giovanni’s alter ego.  He finds refuge and passion within Constancy’s joy in repetition.  Constancy, coming off, at first, as a June Cleaver type, even has children here, yet she, like Buñuel’s suburban Severine, is also erotically unhinged.

Here, Friba sings Constancy’s amazingly difficult aria, “Biancheggia in mar scoglio,” while simulating a graphic sex act with Nacoski’s enchanted Scipione pinned to the bridal bed.  It is the kitten Constancy who wins Scipione.  Alas, Bobor’s voluptuous Fortune doesn’t stand a chance; she materializes as the living embodiment of “hell hath no fury like a woman scorned.”

The opulent set designs of Renate Martin and Andreas Donhauser enhance Sturminger’s phantasmagoric cosmos where heaven is a swank hotel. Pubilius ‘aria sung from a casket and Aemillius’sage advices sung while playing golf with a miniature earth are among the quirky touches in this production.   The spirited conducting by the young Robin Ticciati compliments the actors and Sturminger’s direction.  Normally, at least on record, this dramatic serenade is a painfully dull affair (the Peter Schrier, Lucia Popp performance is a wonderful exception to the rule).  The M22 team makes what is normally dismissed as lesser, early Mozart into one of the zippier and stronger efforts of the Salzburg project.  As good as the rest of the cast and company are, however, it is the firebrand Fribo who leaves all the other good efforts in the dust.  She is a remarkably gifted singer and performer who convinces us that Scipione’s choice is an excellent one.  If only she had been sent Giovanni’s way.  She easily could have pacified that formidable beast behind her white picket fence.

Ascanio in Alba (libretto by the satirical poet Giuseppe Parini) is a classical celebration of marriage, set in pastoral, mythical Alba.  Ascanio, the son of Venus and Aenus, is engaged to the nymph Silvia and is destined to rule.  For the proceeding four years Cupid, in Ascanio’s form, has courted Silvia in her dreams.  The time has come for Ascanio to meet Silvia, but Venus has a condition: he cannot not reveal his true identity to the nymph.  This is Venus’ test of Silvia’s virtue.  Fauno, ruler of the Alban shepherds, acts as Silvia’s chaperon and implores Ascanio to honor Silvia’s modesty.  The priest Aceste attempts to assure Silvia that the man in her dreams is the very same Ascanio to whom she is engaged.  Silvia meets Ascanio and believes she recognizes him as the man of her dreams, but Fauno, under Venus’ instructions, convinces Silvia that she is mistaken.  Saddened, Silvia becomes listless and gravely ill in her distress.  She announces she will never love anyone other than the Ascanio of her dreams.  When Ascanio approaches her, she flees him.  Silvia’s virtue is confirmed ,and Aceste  assures her that her trials are at an end.  Venus, surrounded by clouds, descends by chariot and unites the two lovers.  As Aceste binds the lovers, and proclaims his own fidelity to Venus, the matriarchal goddess departs, leaving Ascanio and Silvia to prosper.

“Mozart is lucky he’s dead” wrote one critic when reviewing David Hermann’s M22 staging of Ascanio in Alba.  The reviews for this have been universally dreadful.  Ascanio in Alba is one of Mozart’s most richly inventive and sublime early operas.  Most disappointingly, however, Hermann’s production is neither, and the scathing reviews are dead on.

Although Adam Fischer’s conducting of Mozart’s music is lucid, the Italian secco recitatives are disconcertingly replaced by monotonously tepid narration (supplied by two narrators).  Christoff Hetzer’s set design required 3d glasses for the premiere audience, which is a telling sign for what comes off like a first year art school student production that reduces transcendental mythology to inept, adolescent science fiction.  The Star Trek-looking Alban shepherds appear as badly white-wigged robots who break into frenzied, epileptic seizures as they sing their chorus to Venus.  Ascanio (Sonia Prina in bald wig) appears hopping across the stage in a sleeping bag and then gets plopped onto a stack of green, rubber gym mats (those mats reappear time and again for Ascanio to sort of dance with, on, and around).  The Alban shepherds reappear, minus face paint but now with Groucho Marx mustaches, what looks like diapers on their heads, and potted plants in their arms.  Diana Damrau is an all too brief, charming high point as Fauno on a swing.  Silvia (Marie-Belle Sandis), adorned in an embarrassingly ill-fitting ballerina outfit, is thrown into a wheel-barrel, and wheeled onto stage by her chaperone, Aceste (Charles Reid), who wears a fur jacket over a golfing sweater.  In equal opportunity fair play, Silvia gets her time on the pile of green gym mats and her chance for a spotlighted slaying in the spirit while the narrators repeatedly fall, get up, fall, get up—like children playing in a cowboys and Indians game.  The gym mats become mobile Lego sets, and the narrator finally puts on 3d glasses himself (in order to let the audience know that they need to follow suit?) The meeting of Ascanio and Silvia finally takes place on, you guessed it; a green gym mat. 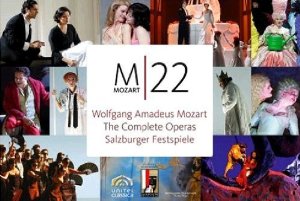 Prina, Damrau, and Sandis are in excellent voice, making this infantile travesty all the more a tragically wasted opportunity.