Edgar G. Ulmer began his career at Max Reinhardt’s theater, became an apprentice to F.W. Murnau on the director’s masterpiece Sunrise (1927), and received a commission to direct Universal’s two new horror icons, Boris Karloff and Bela Lugosi in their first co-starring film. With The Black Cat (1934), Ulmer secured an enviable budget and practically carte blanche. The Black Cat may not have had much to do with Edgar Allan Poe, but the legendary 19th century writer would have loved Ulmer’s deliciously black deco homage. 1934 critics and audiences most certainly did, making it a bona fide hit. Ulmer’s idiosyncratic cult film remains the two stars’ best film together. The director was at the top of his game and looked to have a long and successful career ahead. By all rights, Edgar G. Ulmer should have had a career and body of work that could be placed alongside the films of James Whale and Tod Browning. Then, Ulmer screwed up.

Universal was a family-ran studio when Ulmer decided to have an affair with the wife of a top-ranking Universal studio executive. Ulmer was fired and blacklisted, by the major studios, for life. Believe it or not, Hollywood once had a sense of morality. Ulmer was reduced to working for the poverty row circuit, namely PRC Studios. He later claimed that this was his artistic choice to do so, because it gave him greater creative freedom. He lied. Ulmer loved European culture, art music, and was known to discourse fluently on the aesthetic process with actors (Karloff was delightfully challenged by Ulmer). Many of Ulmer’s contemporaries freely acknowledge that Ulmer was also a pathological liar. Of course, this only makes him more interesting. He consistently exaggerated his background (when he didn’t need to), padded his resume, and made outrageous claims about himself. Despite all of that, Ulmer had a unique aesthetic sensibility and conscientiously tried to inject  that into his films, even in scripts that could only pass for excrement.

Ulmer struggled as much with PRC as he did with Universal. It was the classic case of artist vs. executives. Ulmer lost far more battles than he won, although he naturally fared best when he was allowed to act as his own producer. Ulmer desperately wanted to make a film of the Bluebeard story for 10 years. Originally, it was supposed to star Karloff and would be his follow up to the Black Cat. True to form, Ulmer exaggerated when he later claimed that he had tried to make the film for 15 years.

Along with Stanley Kubrick, Ulmer probably was the director who most mastered the wedding of music to film, and he was fortunate to have composer Leo Erdody, who supplied a lush, eclectic score for Bluebeard. Ulmer was equally fortunate in his draw of a cinematographer: Eugen Schufftan, who could make a 75 cent film look good. Ulmer served as his own set designer, as he often did. The film’s Faustian theme of tormented love reaping evil consequences served Ulmer’s inspiration well in both the sets (a puppet show of Faust) and in the film’s parallel narrative.

Bluebeard is considered to be Ulmer’s first noir film and third masterpiece (behind the aforementioned Black Cat and 1945′s Detour). Like most of Ulmer’s noirs, Bluebeard  is characterized by a frenzied poetry that could only have been produced in the cinematic equivalent of Gehenna. Ulmer’s generic brand of noir seems more suited to the genre than the glossy, name brand product offered by the major studios.
John Carradine stars as Gaston Morrell, the infamous titular Bluebeard. Carradine had said that this film was the one he was proudest of. It shows. Carradine completely embodies the 19th century puppeteer, painter and serial killer. During his puppet production of Faust, Gaston meets the beautiful Lucille (Jean Arthur), much to the chagrin of  his assistant Renee (Sonia Sorel, who, later, became Mrs. John Carradine). Predictably, Renee is the next victim found in the Seine. Wisely, Schufftan and Ulmer focus not on the strangulation victims, but (in extreme close-up) on the pernicious face of their killer. Schufftan’s excellent, smokey camera work defies the film’s bottom of the barrel trappings. 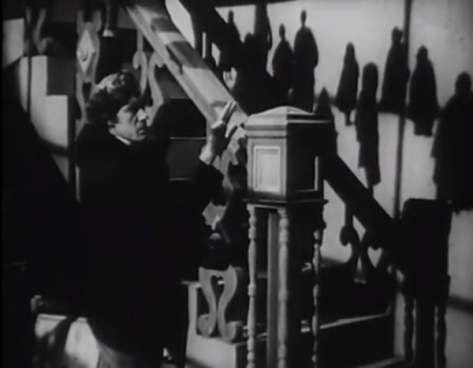 Ulmer liberally employs symbolism throughout. The Puppet performance is extensive, with a flaming finale that foreshadows the ominous fireplace in the final confrontation between Gaston and Lucille. The three primary puppets depicted in Gaston’s production are the three scabrous characters of Faust, Marguerite, and Mephistopheles. These echo Gaston, Lucille, and Jean Lamarte (Ludwig Stossel), Gaston’s art dealer who procures models/victims for his artist.

There are some typical 1940s touches, mainly in a strong female character (Arthur) contrasted against a weak, tormented male (Carradine) and a downright Mephistophelian capitalist (Stossel). There is also an atypical (and woefully out of period) surrealist painting that becomes THE clue for the film’s Sherlock Holmes inspector (Nils Asther). The painting serves an art-of-murder function akin to the wax figure in Michael Curtiz’ Mystery of the Wax Museum(1933). But, Jean Arthur is no shrieking Fay Wray. At first, Lucille is charmed by the handsome, soft-spoken puppeteer. Later, when her suspicions are aroused and her own sister falls prey, Lucille refuses to be further manipulated and becomes the aggressor.

The collaboration between actor and director works wonders when we witness the dissipation of Morell’s mental state. There are subtle hints of sexual depravity as well, set off by the shame of rejection. Ulmer would revisit these themes in numerous films. Bluebeard, long a public domain film, has recently been cleaned up in Image Entertainment’s “Edgar G. Ulmer Archive Collection.” It is hardly a perfect remastering, but it looks better than it ever has. 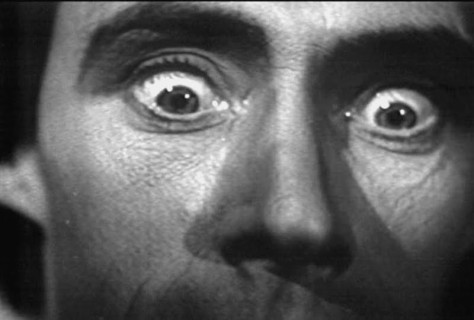