Head (1968) is the quintessential cinematic oxymoron: a “G” rated LSD trip, starring The Monkees, with cameos by Victor Mature, Anette Funicello, Teri Garr, and Frank Zappa! Written by Jack Nicholson and directed by Bob Rafelson, Head has a reputation for having killed the career of The Monkees. Actually, their short-lived television series had already been cancelled after the end of its second season. A manufactured-for-prime-time pop band, The Monkees were, of course, the first prefab phenomenon; a second-rate ripe off of the Beatles, sponsored by Kelloggs.

The brevity of their career was utterly predictable. Despite that, and despite being clearly modeled after Richard Lester`s A Hard Day’s Night (1964), “The Monkees” TV series (Rafelson was part of the creative team) had fleeting moments of innovative satire and surrealism.

The script for Head was reportedly conceived one night when Rafelson, Nicholson and the Monkees were tripping on acid. With the Monkees fad already in its death throes, the creative team plunged into producing the group’s first and only feature as an experimental opus depicting the suicide of Peter, Michael, Davy, and Micky. The result was an epic bomb. Most critics hated it, as did its potential audience. Fans of the boy band were outraged at the sacrilegious nature of the film, while the hippie culture avoided anything with the Monkees name attached. Yet despite all odds, Head became a cult favorite in many circles. Evidence of that may be found in Rhino Records decision to release the film on DVD. With Rhino’s reputation as the Criterion Collection of bizarre and obscure cinema, television and music, that amounts to something approaching canonization. 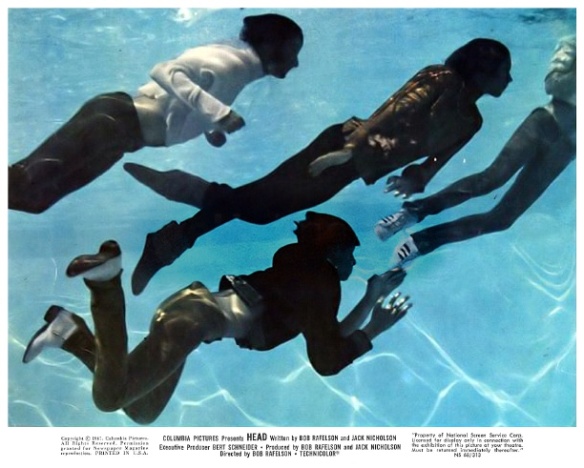 Mickey’s dive off a bridge sets the opening tone of a spherical immolation. Admirably, the Monkees do not attempt to make a big screen version of the TV show, rather they deconstruct it through a series of random, nonsensical misadventures arising from their attempt to escape their “box.” Their War Chant serves as an apt theme:

Hey, hey, we are the Monkees,
You know we love to please.
A manufactured image
With no philosophies.

We hope you like our story
Although there isn’t one;
That is to say there’s many
That way there is more fun.

We know it doesn’t matter
`Cause what you came to see
Is what we’d love to give you
And give it one, two, three.

But there may come three, two, one, two,
Or jump from nine to five,
And when you see the end in sight
The beginning may arrive.

For those who look for meaning
And form as they do facts,
We might tell you one thing
But we’d only take it back.

You say we’re manufactured,
To that we all agree.
So make you choice and we’ll rejoice
In never being free.

Hey, hey, we are the Monkees,
We’ve said it all before.
The money’s in, we’re made of tin,
We’re here to give you more. 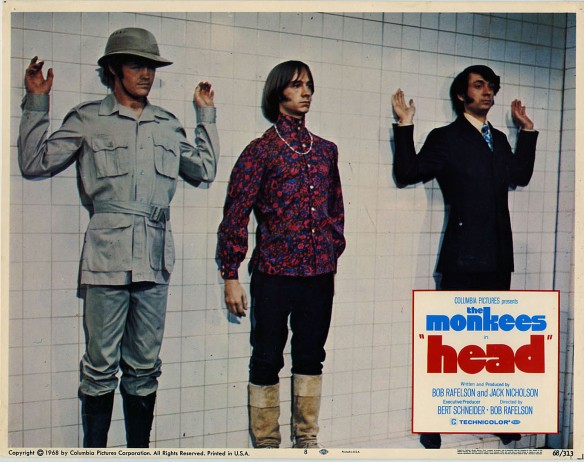 After swimming with the mermaids, the Monkees attempt to break through every wall, only to be insulted by everyone from Frank Zappa and his cow (`You’re too white for me”) to television exec Victor Mature attempting to keep them in their box (think a non-narrative Truman Show-1998). In response to a white trash waitress’ assertion that they are “God’s gift to eight-year-olds,” the Monkees set out to do everything but entertain us. Rather, they disturb us, assault our senses, and take us with them through Mickey’s angst-ridden frustrations on a Coke machine, dandruff commercials, the dismantling of a cardboard western set, and a non-Billboard pop tune (`The Porpoise Song”). The Monkees get lost, found, beaten to a pulp, consult a swami, get lost again, found again, and end where they begin: reiterating their suicide. The Monkees are sick of Monkeemania, their fans, and themselves (particularly Nesmith), and they want us to be sick of them too. They succeed, through the sheer honesty of their travels.

The Monkees put their money where their mouth is, purposefully not even mentioning themselves in the original ad campaigns. Some have compared Head to the Beatles’ Magical Mystery Tour (1967) and Yellow Submarine (1968). Yet, Head, this stream-of-conscious oddity featuring a synthetic pop band, manages, against all odds, to be one of the best counterculture films of the late 1960s, surpassing most of the films by the original Fab Four. Amazing, but true! 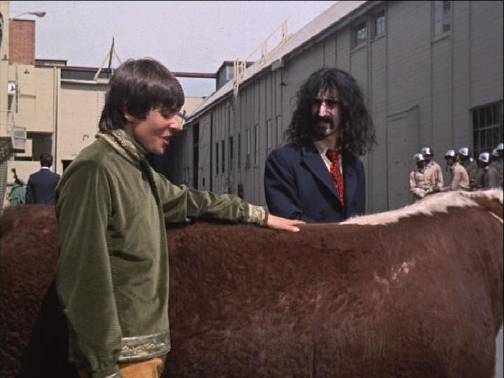