A quarter century after its debut, Tim Burton‘s Batman (1989) is still among the brightest of the comic book genre films; an odd thing, given how dark it is. However, Burton’s Batman has a glamorous darkness. Burton was young, energetic, and at the top of his game in 1989. His interpretation of the caped crusader remains groundbreaking and is more astute than Christopher Nolan‘s The Dark Knight (2008). Nolan went the mile to distance the avenger from his comic book origins. Burton embraces the source material.

Upon Batman‘s monstrously hyped release, many critics lamented the dominant personality of Jack Nicholson‘s Joker as compared to the title character. In hindsight, Nicholson’s killer clown seems less innovative than Heath Ledger’s radically different interpretation. Today, it is easier to recognize Michael Keaton’s Bruce Wayne as the eye of Tim Burton’s hurricane: he inhabits the quintessential capitalist fantasy. In a case of shrewd casting, Keaton’s Batman has no extraterrestrial powers, nor does he even look like he has spent his life in the gym. Rather, Wayne is fabulously wealthy and it is all those “wonderful toys,” bought by all that wonderful money, that makes him an all-American noir Superman, free to wreck vengeance upon a fascistic Gotham’s lower criminal element. Like Humphrey Bogart and Gary Cooper before him, Keaton went through the script, pruning his dialogue down to the bare essentials, making this an internalized performance.

Burton’s casting inspired controversy among unimaginative comic book fanatics, who only saw Keaton in his previous comic roles. The actor and director proved them wrong. Christian Bale‘s Wayne, in the Nolan films, resorts to a dull playboy act. Keaton’s Wayne can’t help revealing that he has as many screws loose as his alter ego. Burton says in less than ten minutes what Nolan takes an entire film to tell: Vicky Vale (Kim Basinger) and Alexander Knox (Robert Wuhl) stumble upon a hidden Wayne manor room of armor and weaponry, explaining the inspiration for the costumed alter ego.

From Boss Grissom’s mafioso penthouse to the Axis chemical plant and a quack surgeon’s back alley office, Anton Furst’s set design is among his best (in an impressive career that unfortunately ended with the artist’s suicide in 1991). Also noteworthy are Roger Pratt’s cinematography, Bob Ringwood’s costuming and Danny Elfman’s resonant, Wagnerian score, all done under the guidance of Burton, elevating pulp into anarchic poetry. Like the Burton-helmed-sequel, Batman consistently surprises enough to nearly render its flaws secondary.

Nicholson’s Jack Napier shines most when he wrecks havoc upon pop culture, sabotaging consumer products and brooding over popular media’s not so subliminal sales tactics. The chief flaw of the film lies in a lack of a substantial female character, which Batman Returns (1992) remedied in spades. Vale is merely there as a decoration for Bruce Wayne’s arm. A second noticeable flaw is in the intrusive music by Prince (otherwise, a very good artist during his youthful prime). However, the related MTV videos were considerably better, and a wonderful example of how big a pop phenomenonBatman was. 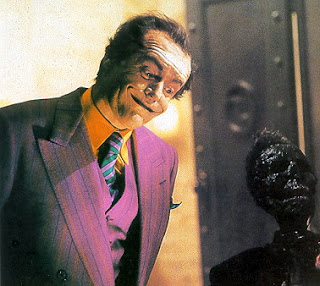 Homages to Frits Lang‘s Metropolis (1927), Alfred Hitchcock‘s Vertigo (1958), and The Wizard of Oz (1939) are prominent, but, for the most part, Burton keeps cinematic references down to a minimum, something he would not do in Batman Returns (1992). Naturally, Tim Burton’s Batman is not as much guilty pleasure fun as “Scooby Do Meets Batman” or “Superfriends,” and it certainly isn’t the delicious morsel that Adam West gave in his legendary camp take on the character. Yet, Burton manages to make a tale of two sociopaths, spawned from the gutter, into highly stylized entertainment. 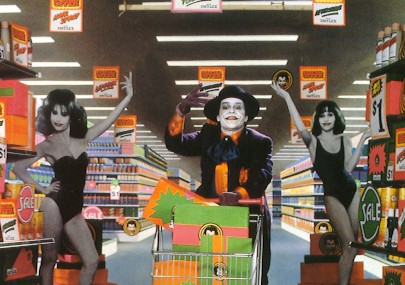 Batman was birthed by the then new graphic novel trend, most notable Frank Miller’s “Dark Knight.” The script was written by Sam Hamm and Warren Skaaren, based on Bob Kane’s original characters. The violence in Batmanis comic bookish and stately: the Joker fries a mafioso with a hidden hand buzzer, and the murder of boss Grissom is devoid of blood. At times, the film seems to be enveloped in a Tex Avery ‘toon: after mating with his girlfriend, Wayne hangs upside like a bat, the Batplane soars upward to the moon (creating a bat signal), a joker card is flipped over with Carl Stalling-like sound effects foreshadowing Napier’s fate, the Joker’s hand melodramatically emerges from acid, the silhouetted Caped Crusader moves like wet ink atop a roof, and the Joker shoots down the Batplane with a gun that looks like it might have been ordered from Acme supplies. The henchmen are really not too far removed from Cesar Romero’s sycophants. Batman is crepuscular, and, thankfully, it’s never realistic. 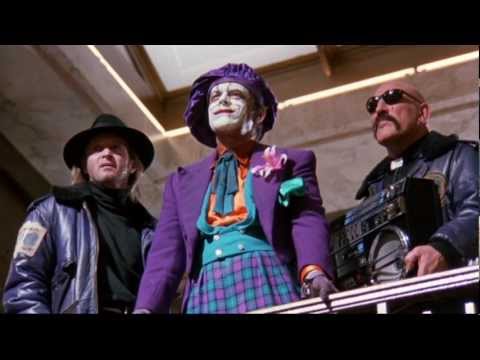 Apart from Heath Ledger, Nolan’s believed-to-be superior Dark Knight is devoid of humorous touch and is so utilitarian, with one plot too many, that it is doubtful the film would have worked without the late actor’s turn as a pathological clown. 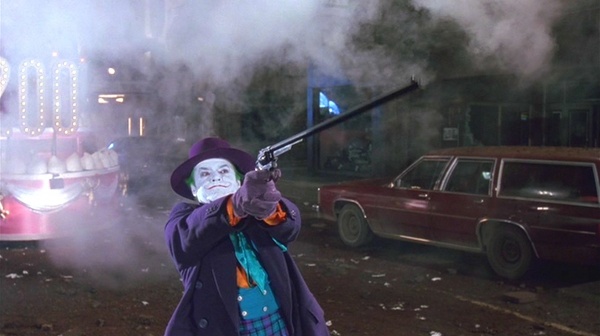 Unfortunately, neither Burton nor Keaton went beyond their two entries in the series. Perhaps a man dressed up like a bat might revitalize both artists.